Elvis debuted during Game 1 of the Stanley Cup playoffs against the Los Angeles Kings in 2018. It's been a staple in the team's pregame arena show ever since. (Cassie Soto/Las Vegas Review-Journal) 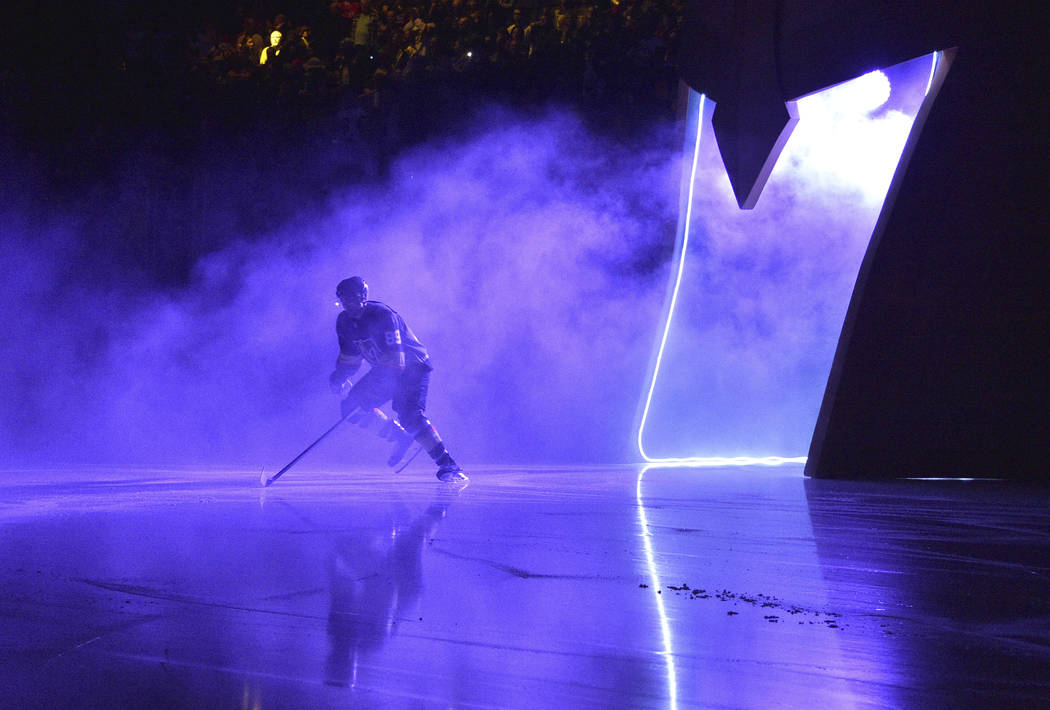 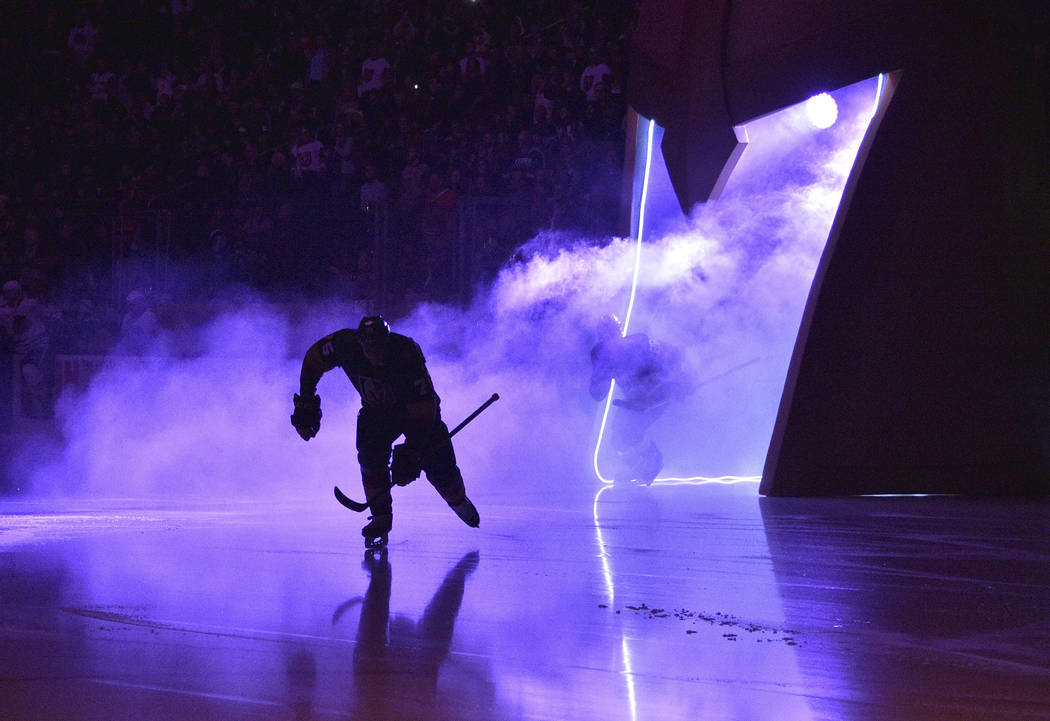 Vegas Golden Knights right wing Ryan Reaves takes the ice prior to the start of the first period of an NHL hockey game against the Chicago Blackhawks Tuesday, Dec. 10, 2019, in Las Vegas. (AP Photo/David Becker) 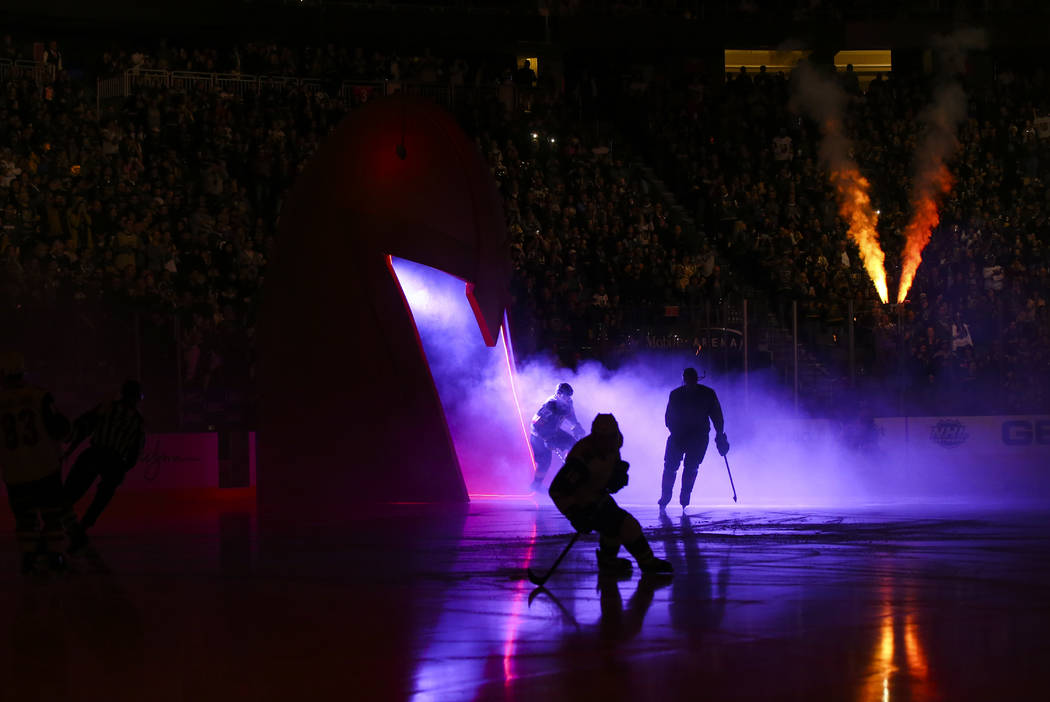 Golden Knights players skate onto the ice before the start of an NHL hockey game against the Arizona Coyotes at T-Mobile Arena in Las Vegas on Tuesday, Feb. 12, 2019. (Chase Stevens/Las Vegas Review-Journal) @csstevensphoto 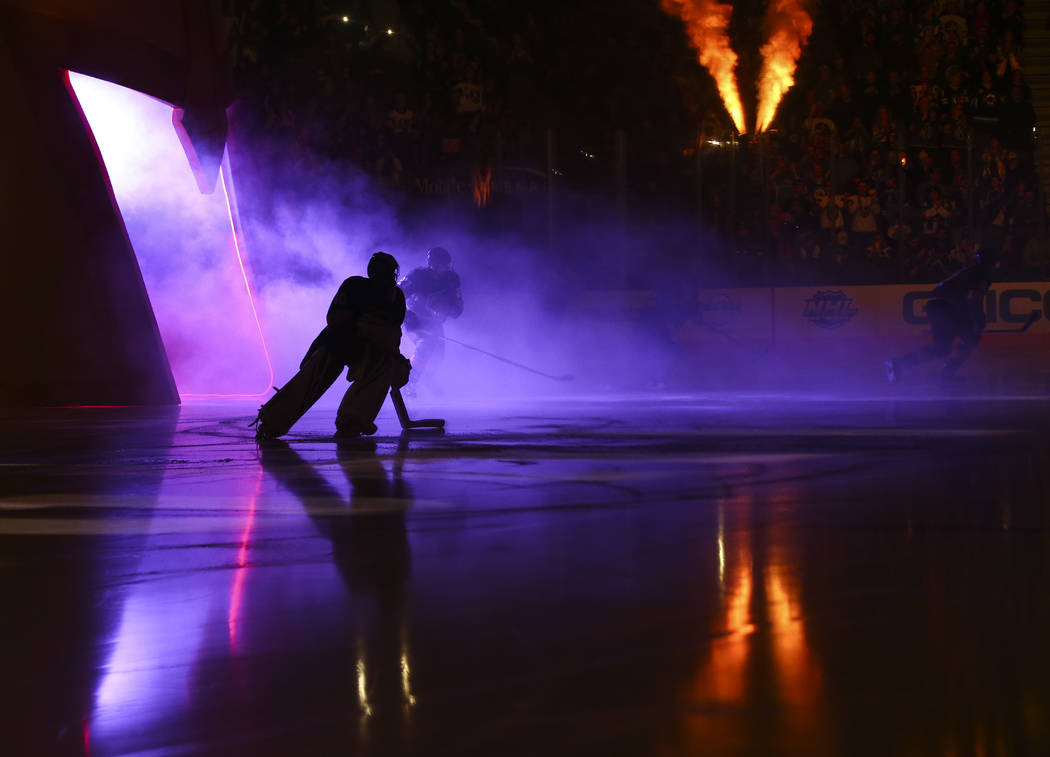 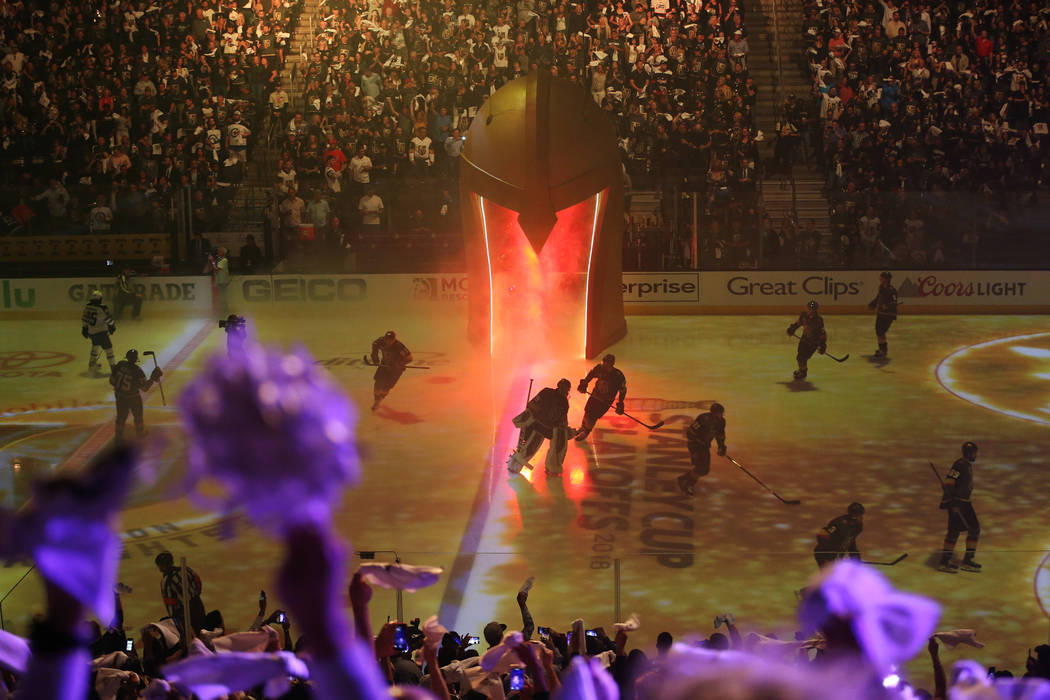 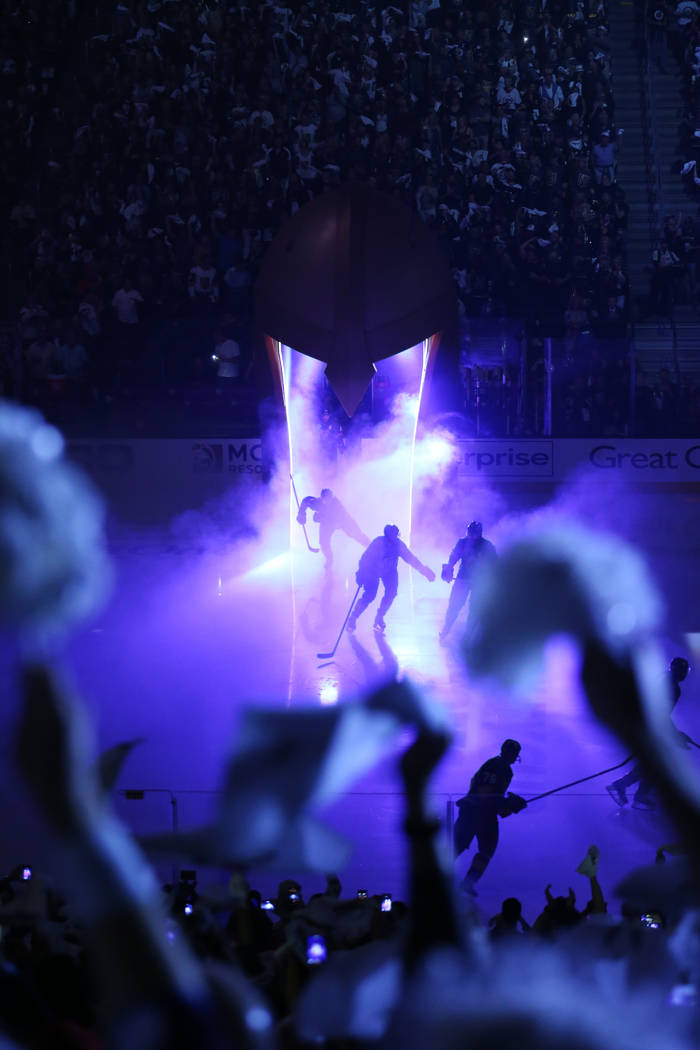 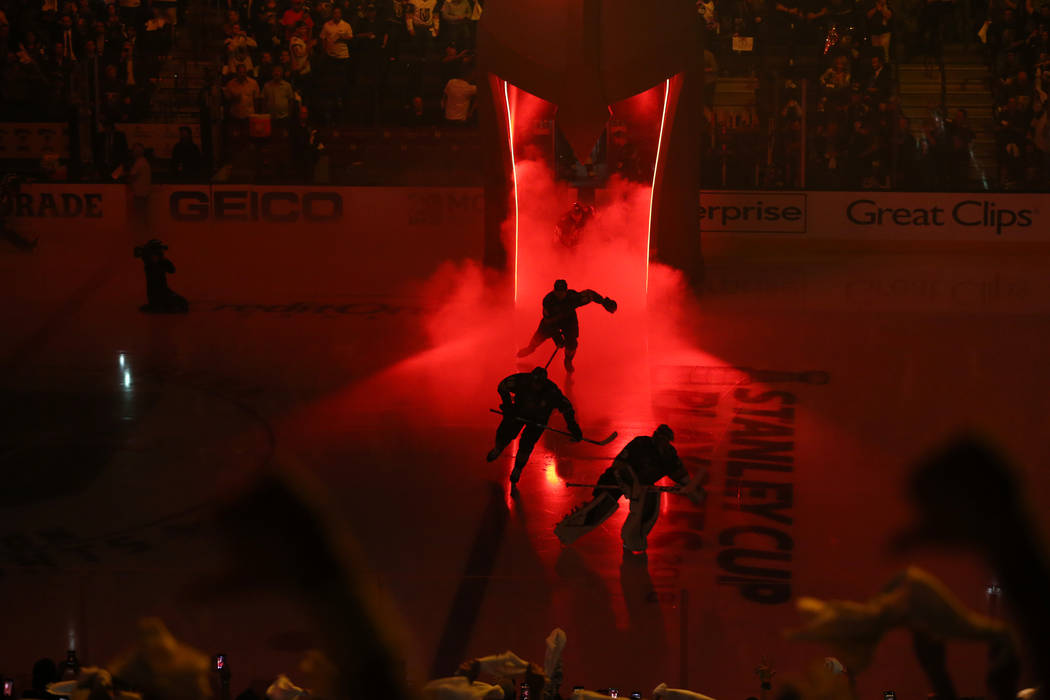 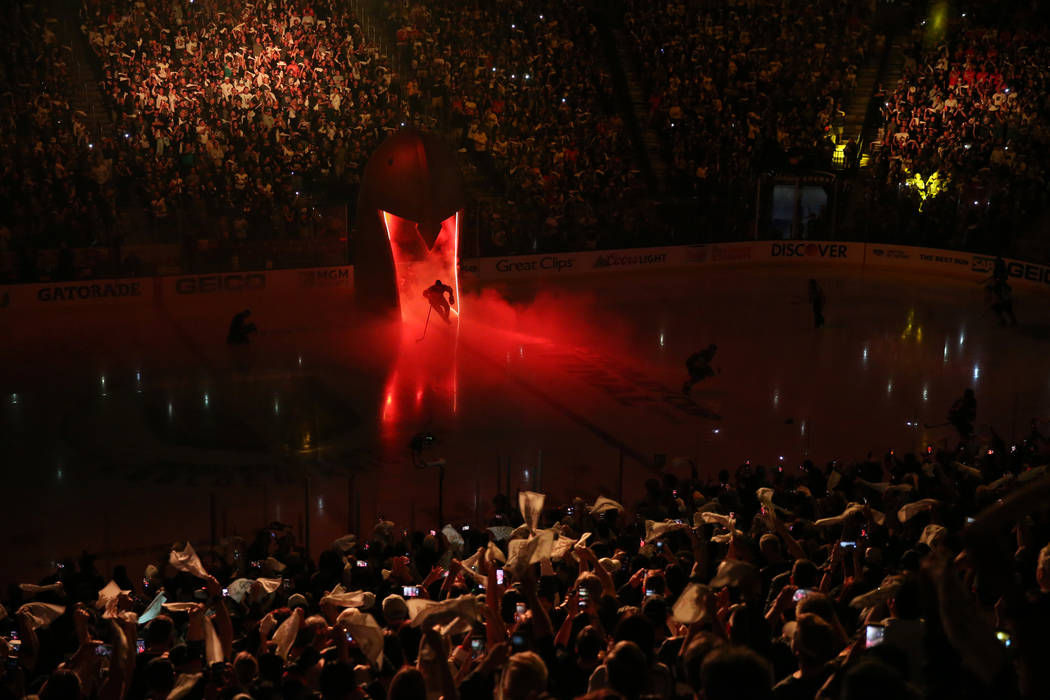 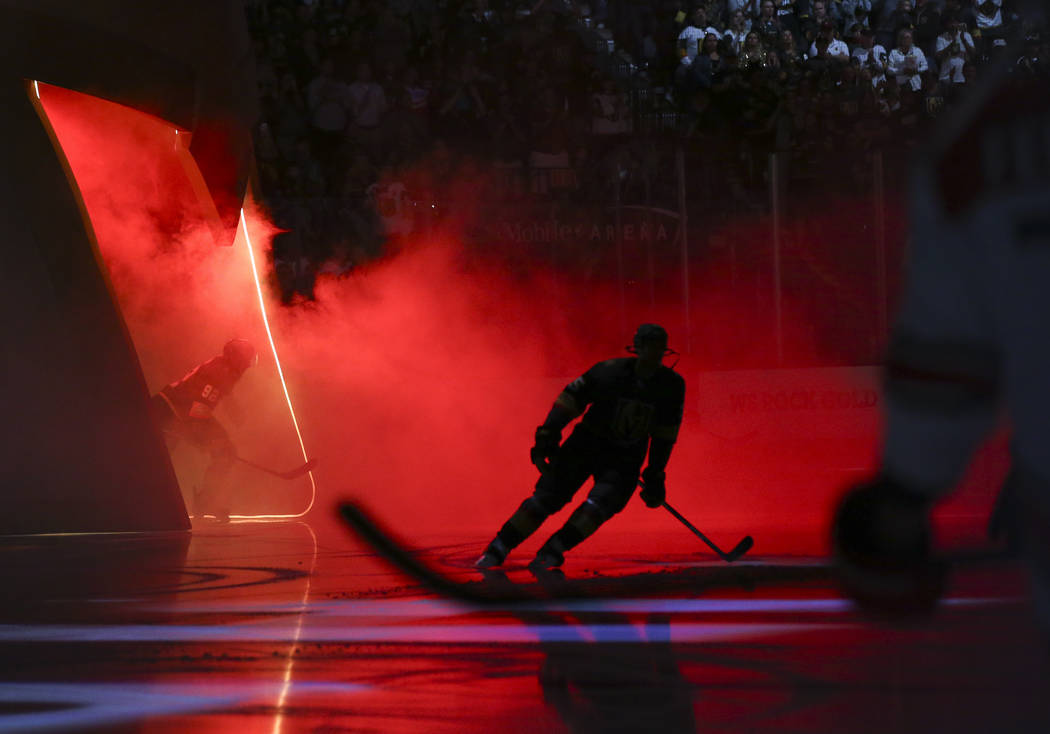 Golden Knights players take the ice for the start of an NHL hockey game against the Carolina Hurricanes at T-Mobile Arena in Las Vegas on Saturday, Nov. 3, 2018. (Chase Stevens/Las Vegas Review-Journal) @csstevensphoto 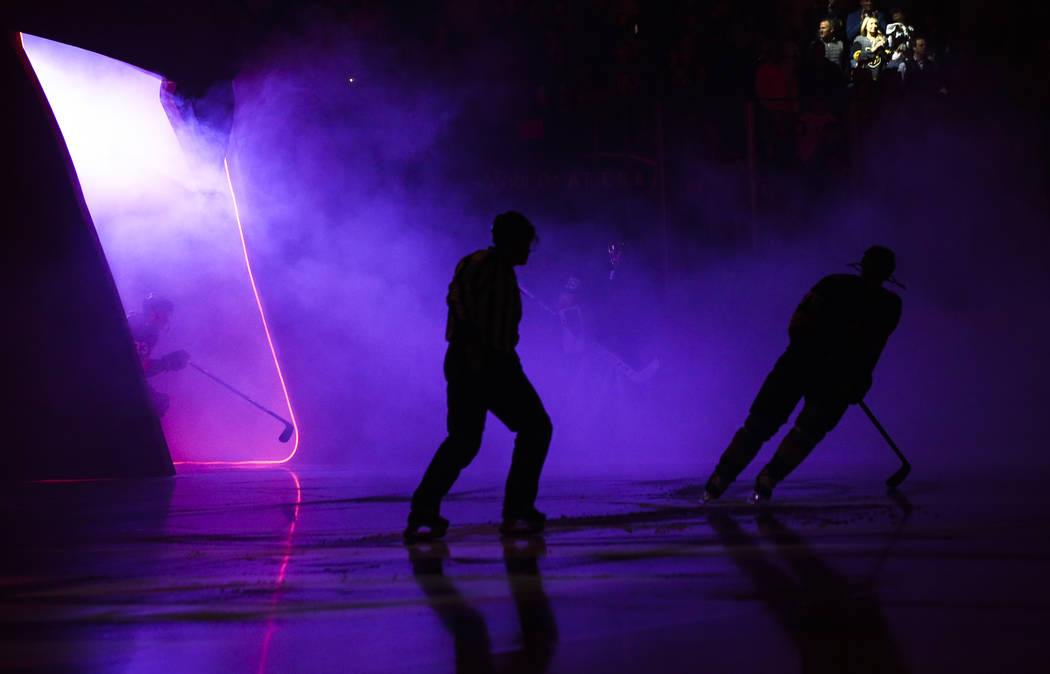 Golden Knights players and referees take the ice before the start of an NHL hockey game against the Washington Capitals at T-Mobile Arena in Las Vegas on Tuesday, Dec. 4, 2018. (Chase Stevens/Las Vegas Review-Journal) @csstevensphoto 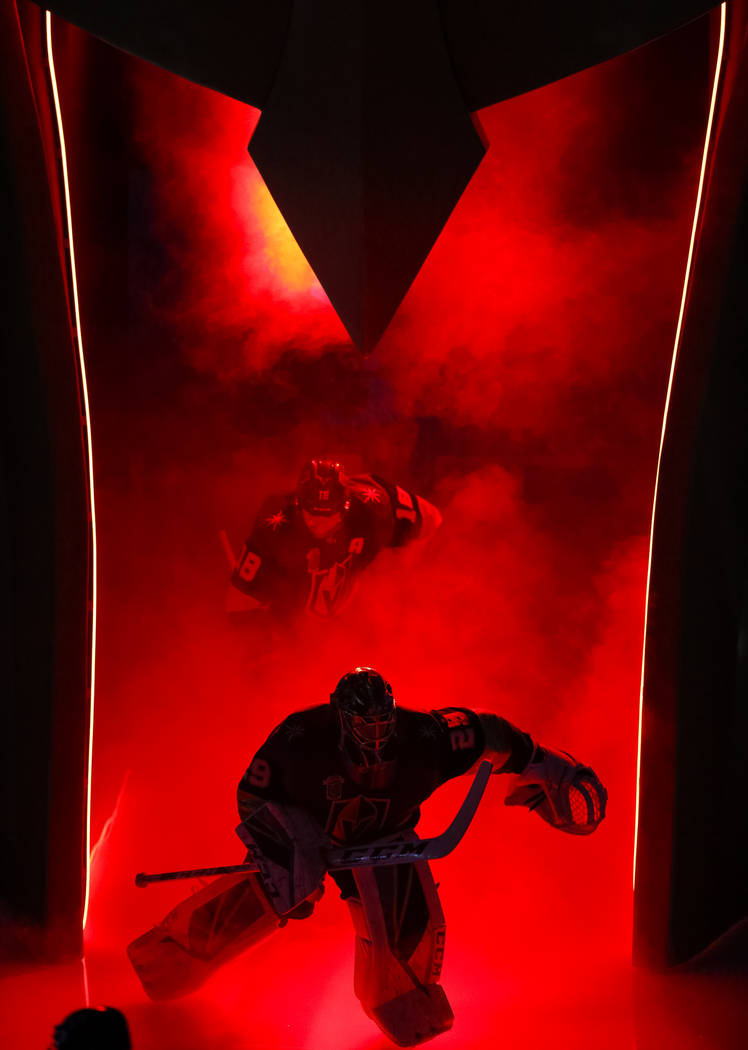 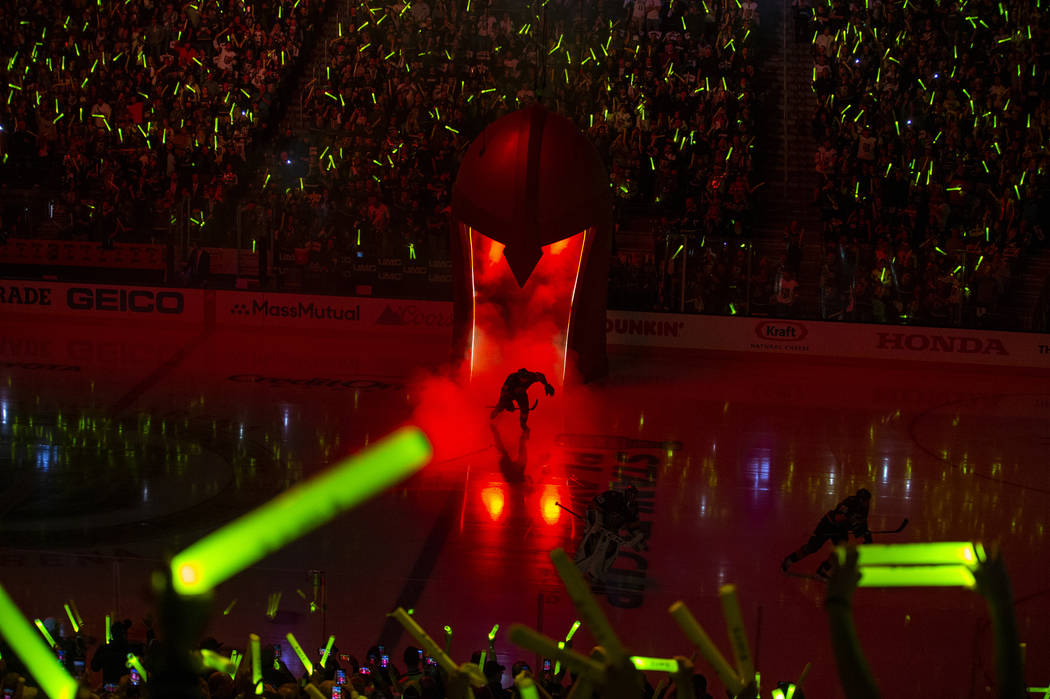 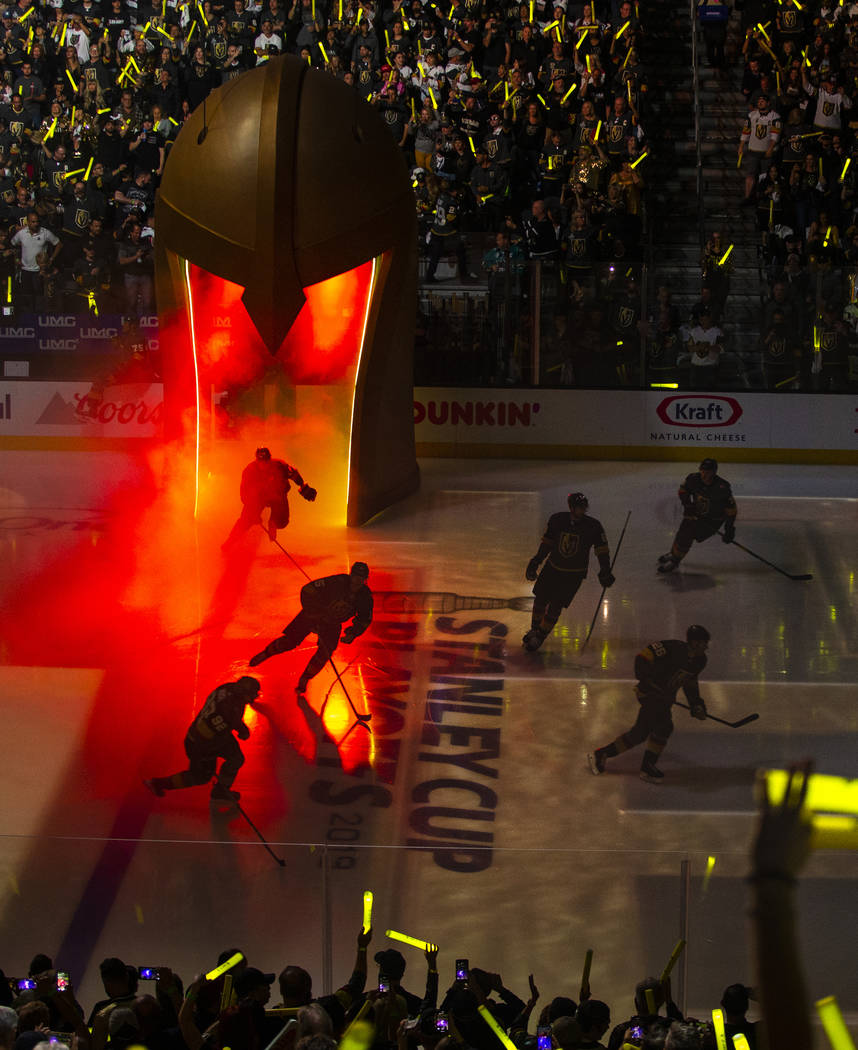 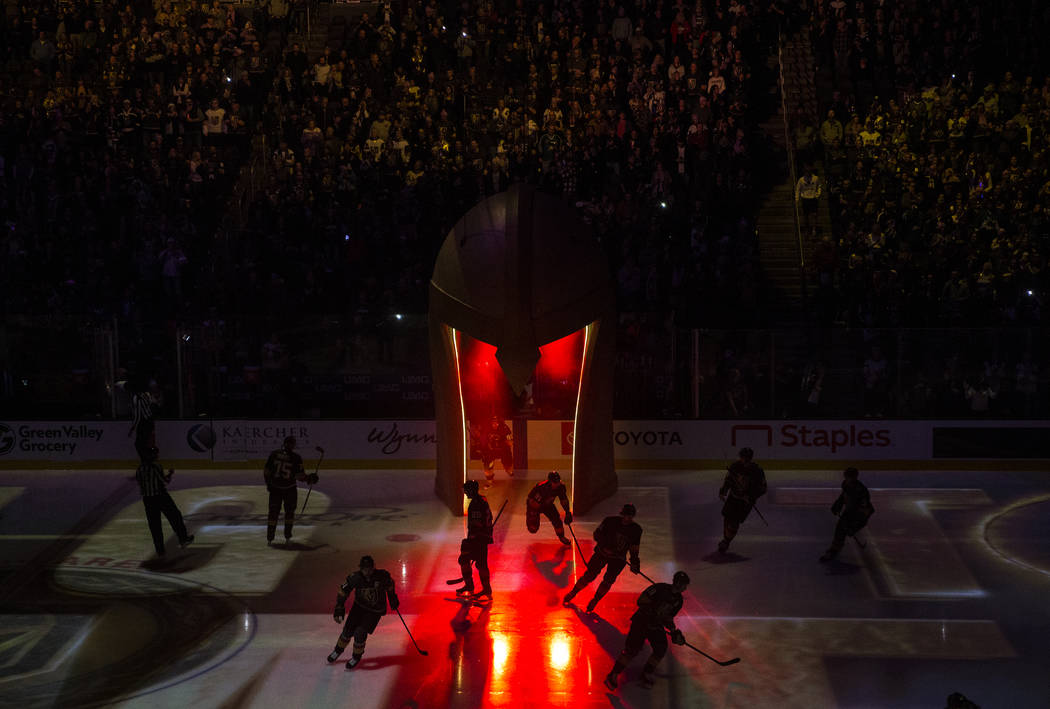 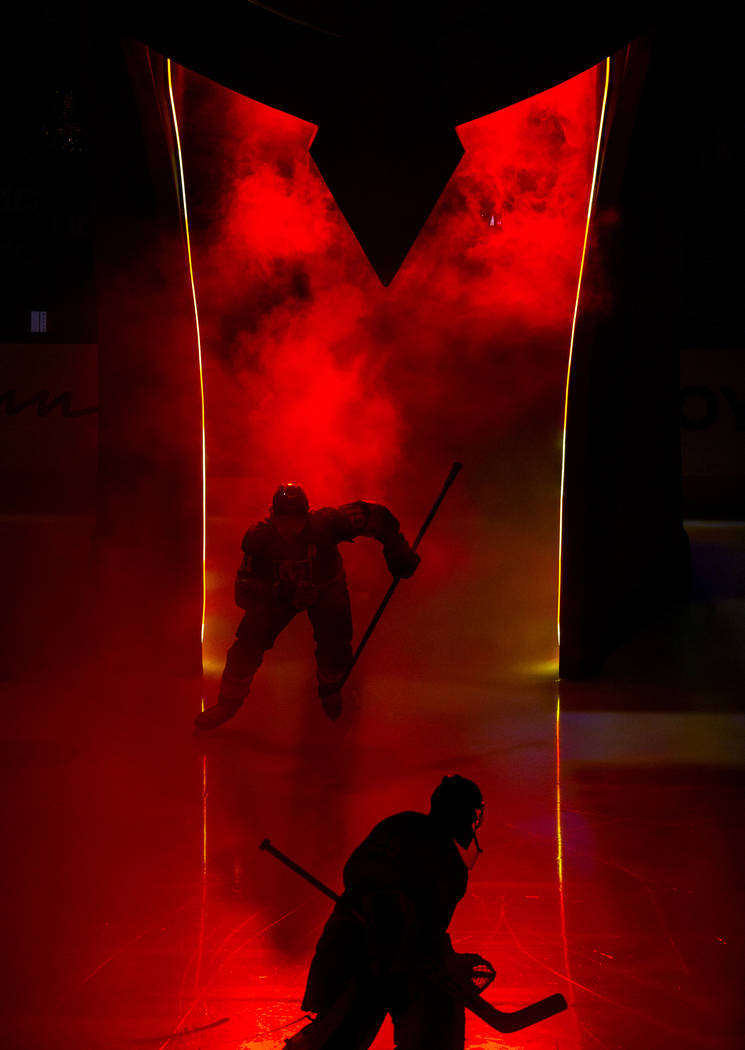 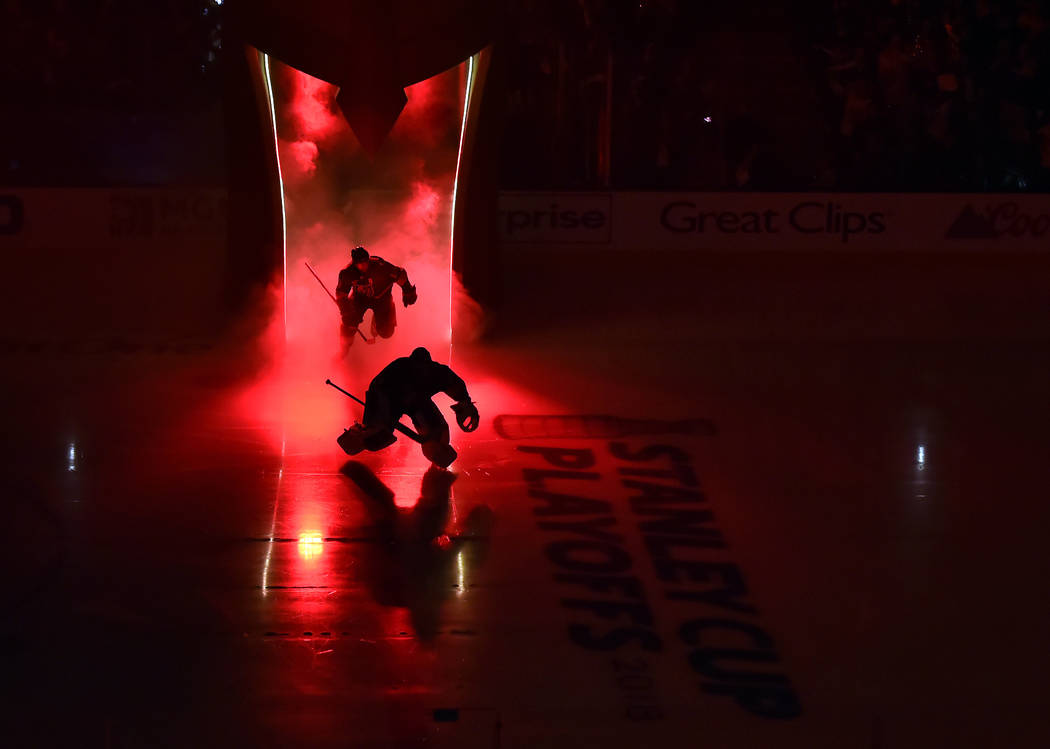 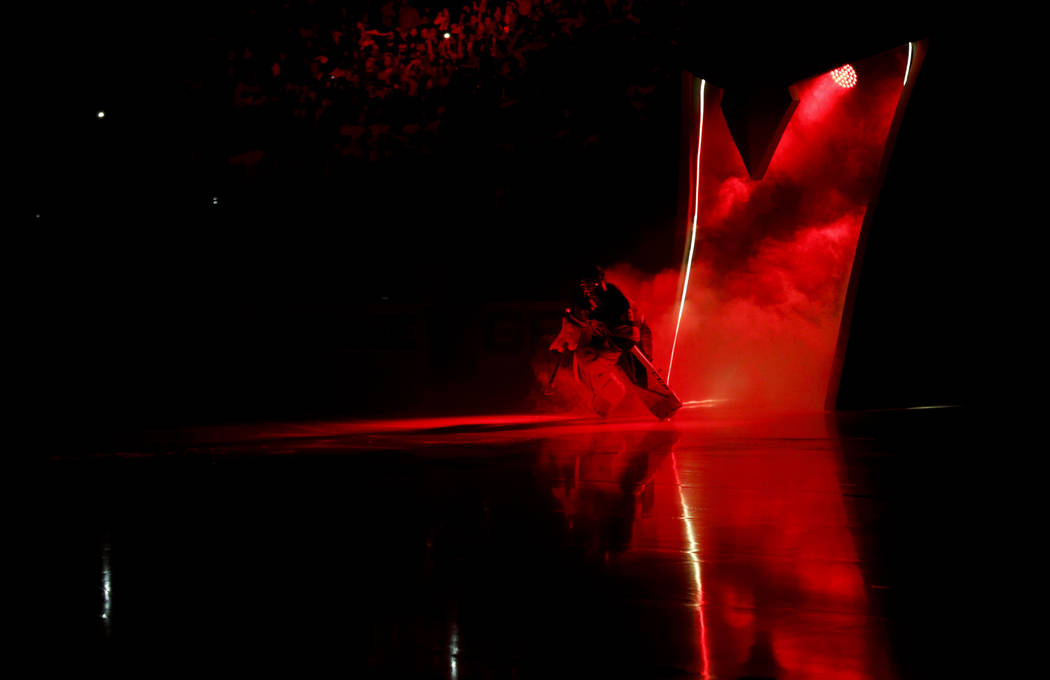 A view of the ice at T-Mobile Arena as seen from the rafters. (Rochelle Richards/Las Vegas Review-Journal)

Elvis is alive and living in Las Vegas.

Not Elvis Presley, of course. But Elvis, the 2,400-pound Golden Knights helmet, which resides in the rafters of T-Mobile Arena.

Elvis, as the team affectionately calls it, debuted during game one of the Stanley Cup playoffs against the Los Angeles Kings during the Knights’ inaugural season, in 2018. It has been a staple in the team’s pregame arena show ever since.

It appears as the team takes the ice. “It has this grand moment; the team comes out, it’s super energetic,” said Ayron Sequeira, the Knights’ executive director of entertainment experience. Then it departs. “So Elvis has left the building,” she said, hence the name.

Originally, the plan was for Elvis to debut during game one of season one. The fates, however, conspired against it.

The helmet was deemed structurally unsound during transport from an out-of-state company. So the team shifted its focus to the pregame show and revisited the helmet later.

The 25-feet-tall helmet used today was created by Water FX, a Henderson company, and took three months to create.

“We were excited,” Sequeira said. “We knew that it added this moment to our show.”

Sequeira, who previously worked for the San Jose Sharks, knows many fans say the Knights copied other NHL teams, including the Sharks, when putting together the team’s entrance onto the ice.

“Yes, there are a lot of teams that have entry portals,” she said. “It’s not a new concept at all. But it doesn’t mean we copied anyone. It’s not like somebody trademarked the idea of an entry portal.”

When you have a massive object living in the rafters, there are a few things to worry about. The main being: What if it falls?

The helmet is connected to a double rigging. It’s on quick motors but also has slow motors in case the quick motors fail, Sequeira said.

“It’s engineered so it’s a safe and reliable prop for us,” she said.

The entertainment crew had a rehearsal to prepare for a failure this year. In a worst-case scenario, it has to rappel from the ceiling to work with the mechanics on the helmet.

Elvis is on a variable speed motor — slow, fast and very fast. It takes two minutes and 50 seconds for the helmet to completely descend to the ice.

During the first two seasons, Richard Wagner’s “Flight of the Valkyries” played as Elvis made his entrance onto the ice. This season, the helmet lowers to the ice during the winter-themed pregame video and begins to light up and smoke during what the team calls the “slow wick.”

For three years the team has entered the ice to a song from the movie “John Wick 2” called “Le Castle Vania.”

“It was a good pick by the DJ,” Knights goaltender Marc-Andre Fleury said. “I think it’s got something a little special to it for us. It gets people on their seat a little bit and it gets us going too.”

“When you hear that (music), you know it’s Knight time,” she said. “You know it’s go time. You can’t help but get excited and ready to go and scream and yell and throw your hands up in the air.”

It’s not a straight shot for players entering the ice through the helmet. Players have to adjust to their left after hitting the ice. LED lights line the curvature of the helmet to help the players see where they are going through the darkness and smoke.

“It’s a little narrow. You gotta turn into the helmet,” Fleury said. “I’ve tripped before in the door. I’m a little more conscious about it now. So far, so good.”

But it’s an experience players love.

“It gives you goosebumps. I love it,” defenseman Nate Schmidt said. “When you first step out, you don’t see much. You only see a real little hole right in front of you. It’s almost like you are being unleashed to T-Mobile Arena.”

As the Knights’ primary goalie, Fleury leads the team onto the ice most games, and he said he feels fortunate to be able to do so.

“The crowd is so loud, the music is pumping,” he said. “You got the smoke in your face … You come out the helmet and the crowd goes crazy. They cheer for the team. It’s a great feeling. It’s fun to go through.”