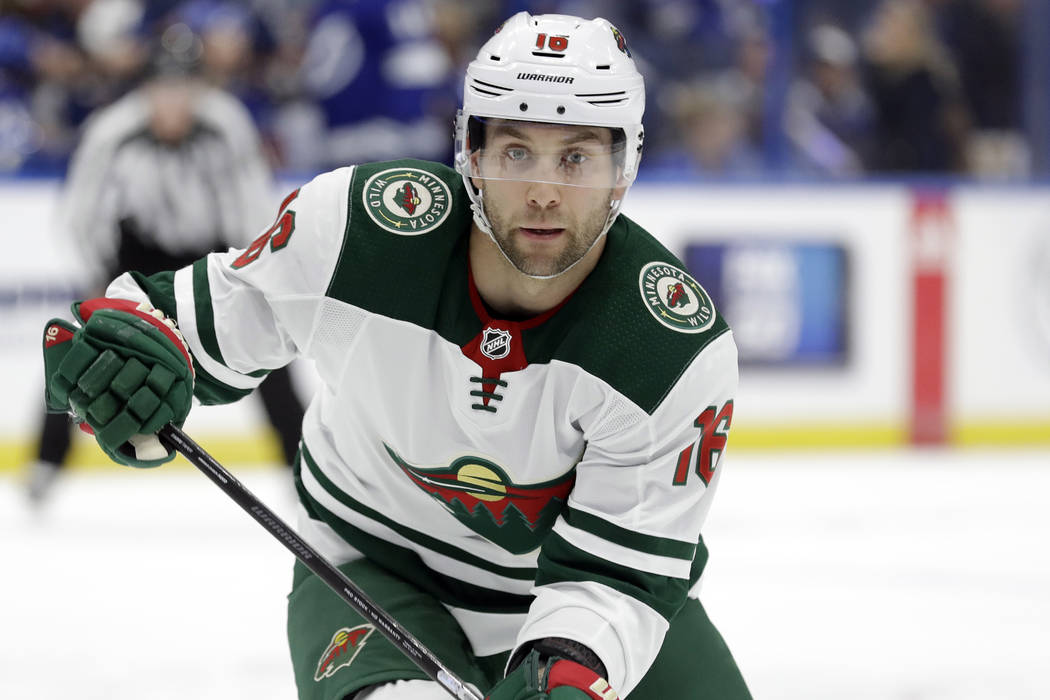 Jason Zucker will not get the opportunity to play against his hometown club when the Golden Knights visit Minnesota on Tuesday.

The Wild traded the Las Vegas-raised Zucker to Pittsburgh on Monday in exchange for forward Alex Galchenyuk, 19-year-old defenseman Calen Addison and a conditional first-round selection in the 2020 draft.

The left wing ranks in the top 10 of the Wild’s all-time lists in goals (fourth), points (ninth), and game-winning goals (fifth).

Zucker was the recipient of the NHL’s 2018-19 King Clancy Memorial Trophy as “the player who best exemplifies leadership qualities on and off the ice and has made a noteworthy humanitarian contribution in his community.”

Zucker has 29 points (14 goals, 15 assists) in 45 games this season and is on pace to reach the 20-goal plateau for the fifth time in his nine-year career.

The Penguins nearly acquired Zucker in an offseason deal before forward Phil Kessel declined to waive his no-trade clause and vetoed the move to Minnesota.

Pittsburgh has been shopping for a wing since Jake Guentzel underwent shoulder surgery Dec. 31. That operation is expected to sideline him for the remainder of the regular season.

If Pittsburgh does not qualify for the 2020 playoffs, it has the option to move the first-round selection in the trade to 2021.

“Jason Zucker is a top-six forward that we think will be a great fit for our group,” Penguins general manager Jim Rutherford said in a statement. “He’s a proven goal scorer, and with three more years on his current contract, he has the potential to make an impact for us moving forward.”

Galchenyuk, a former No. 3 overall pick, struggled with the Penguins since he was acquired from Arizona in the deal for Kessel after the Zucker trade fell through.

The 25-year-old has tallied 17 points (five goals, 12 assists) in 45 games. The Wild did not announce whether he will be available for the game against the Knights at Xcel Energy Center.

Addison was a second-round pick in 2018 and is playing his final season of juniors with Lethbridge in the Western Hockey League.