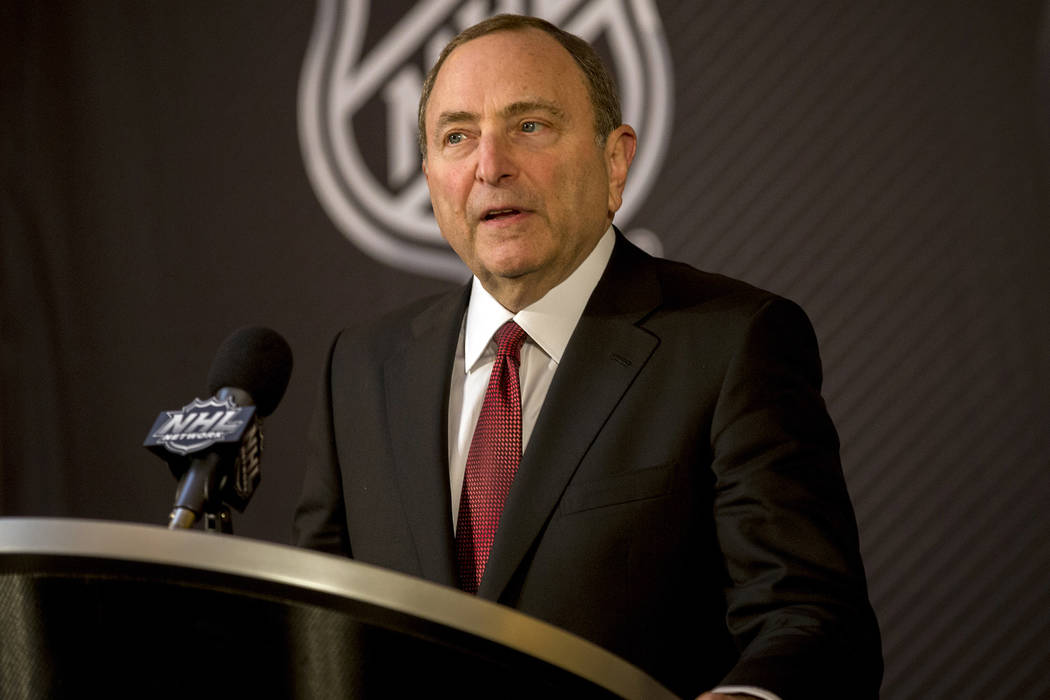 NHL commissioner Gary Bettman announces Seattle as the home of the league's 32nd franchise, Tuesday, Dec. 4, 2018, at the Board of Governors annual meeting in Sea Island, Ga.(AP Photo/Stephen B. Morton)

There will be labor peace in the NHL for the next three seasons.

The league’s player association announced Monday that it will not reopen the current collective bargaining agreement, which keeps it in place until the end of the 2021-22 season. If the players had reopened, the CBA would have expired following this season and raised the threat of a work stoppage.

The decision shows that the optimism around the labor talks for the past nine months wasn’t all lip service. It also proves the money at stake was enough to prevent the contentious negotiations that led to work stoppages in 1994-95, 2004-05 and 2012-13.

The league and the players will now work toward a CBA extension to maintain labor peace beyond 2022.

“While players have concerns with the current CBA, we agree with the league that working together to address those concerns is the preferred course of action instead of terminating the agreement following this season,” NHLPA executive director Donald Fehr said in a statement. “We have been having discussions with the league about an extension of the CBA and expect that those talks will continue.”

The NHL has seen franchise valuations rise, salaries soar and job opportunities increase under the current CBA, so the two sides were motivated to work together. The league declined to reopen Aug. 30, but the NHLPA’s decision carried more intrigue because it was the side pushing for change.

The players’ issues with the current CBA largely revolve around “logistical money issues” such as escrow, Golden Knights NHLPA representative Nate Schmidt told the Review-Journal in August. Schmidt declined to comment after practice Monday because the NHLPA hadn’t announced its decision yet.

Escrow is a portion of each player’s salary that gets withheld to ensure a 50-50 split of hockey- related revenue with the owners. Other issues expected to be discussed in the ongoing negotiations include international hockey participation and alterations to the pension plan and long-term health benefits.

The decision not to reopen ensures the CBA will be in place when the NHL’s national TV deal with NBC expires in the 2021 offseason.

Lee Berke, whose LHB Sports, Entertainment & Media advises more than 30 professional and amateur teams, said the league’s next national TV deal could be worth double its current $200 million annual value — or more.

A new TV deal could keep league revenues and player salaries on the upswing. The NHL’s lower and upper limits for team salaries were set at $48.3 million and $64.3 million in 2011-12. They will be $60.2 million and $81.5 million this upcoming season.

Franchise evaluations are also skyrocketing. Before the last lockout in 2012, Forbes said the average NHL team was worth $240 million. By December 2018 that average climbed to $630 million.

That amount of money will motivate owners and players to keep working together for at least another three seasons.

“We are pleased with the NHL Players’ Association’s decision not to reopen the collective bargaining agreement,” commissioner Gary Bettman said in a statement. “We look forward to continuing to work with the NHLPA for the benefit of all stakeholders, especially our fans.”