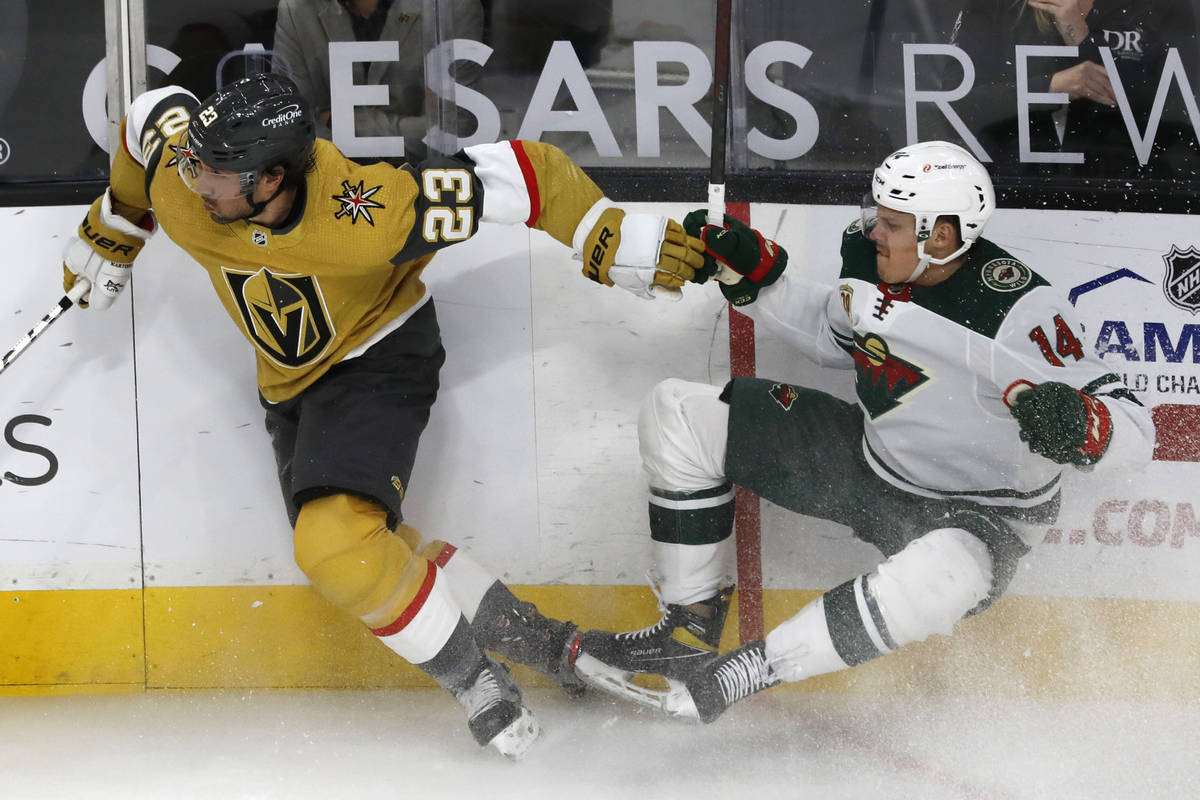 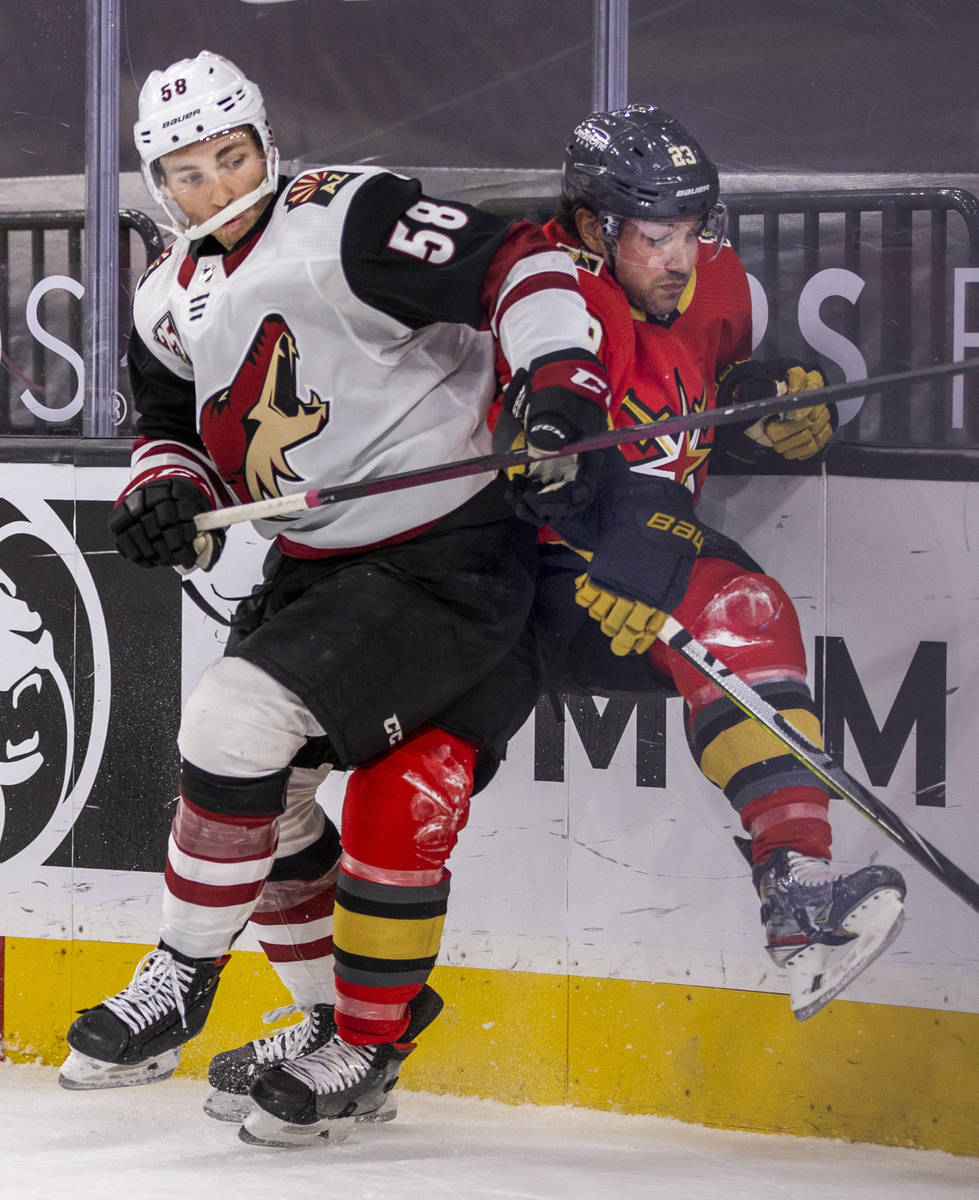 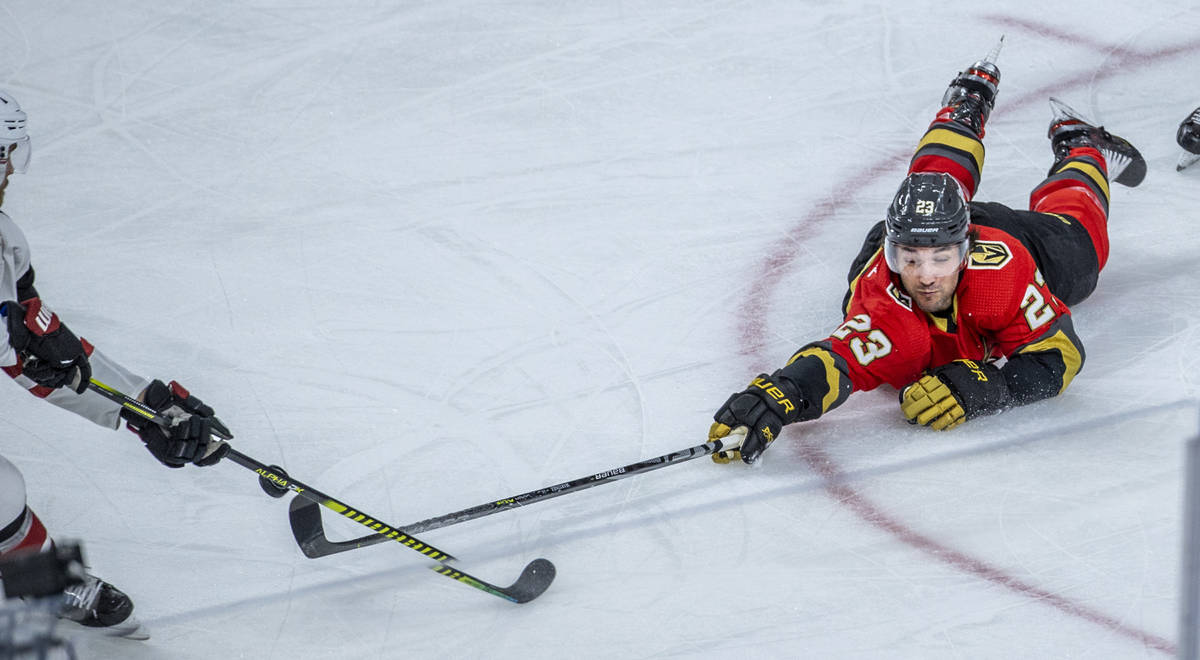 Golden Knights defenseman Alec Martinez (23) dives for a puck versus the Arizona Coyotes during the third period of an NHL game at T-Mobile Arena on Friday, April 9, 2021 in Las Vegas. L.E. Baskow/Las Vegas Review-Journal) @Left_Eye_Images

Alec Martinez is focused on taking care of business in the final eight games of the regular season and trying to win a Stanley Cup with the Golden Knights.

The defenseman hopes it won’t be his last go-round with the club.

Martinez is set to become an unrestricted free agent this offseason and said Thursday he would like to sign a new contract with the Knights.

His agent, Alexander Schall, confirmed to the Review-Journal there have been no discussions with the Knights about an extension.

Martinez has been a stabilizing force on the Knights’ blue line since he was acquired Feb. 19, 2020, from Los Angeles for two second-round picks and provided valuable experience in the locker room.

This season, he has skated alongside Alex Pietrangelo and Shea Theodore and is enjoying one of the best seasons of his career with 27 points (seven goals, 20 assists) in 47 games. That’s his highest offensive output since 2016-17 when Martinez posted a career-best 39 points in 82 games.

Martinez is second on the team averaging 22:31 of ice time and leads the league in blocked shots by a wide margin with 147. His plus-28 rating is tied for second overall behind teammate Theodore (plus-29).

“I want to be back. It’s a great group of guys, and I love playing here,” Martinez said. “It’s no secret the talent that is in that room, and when you’re playing with guys of that caliber and winning hockey games, it’s incredibly fun.

“But as far as the other stuff, I guess I’d echo what my agent says that there’s really no comment to make. There hasn’t been any talks or anything.”

Martinez is at the end of a six-year, $24 million contract he signed with Los Angeles after scoring the Stanley Cup-clinching goal in 2014.

Based on his play this season, Martinez could cost in the neighborhood of $6 million as a free agent, depending on the length of the contract. He turns 34 in July, and it’s unlikely teams would offer more than three years.

One comparable deal could be the three-year, $16.5 million contract defenseman Anton Stralman received from Florida in 2019. Martinez would be one year older than Stralman when he signed and coming off a better season.

The Knights are projected by CapFriendly.com and PuckPedia.com to have slightly more than $6 million in salary cap space for 2021-22 and will have several items on their agenda during the offseason.

The Knights also must decide whether to allocate $12 million in salary cap space to goaltenders Marc-Andre Fleury and Robin Lehner for a second straight season.

“Alec is having a great year and is a big part of our team,” general manager Kelly McCrimmon wrote in a text message. “Those are conversations that, when appropriate, will take place between player, agent and team, and as per club policy there will be no comment on club negotiations.”