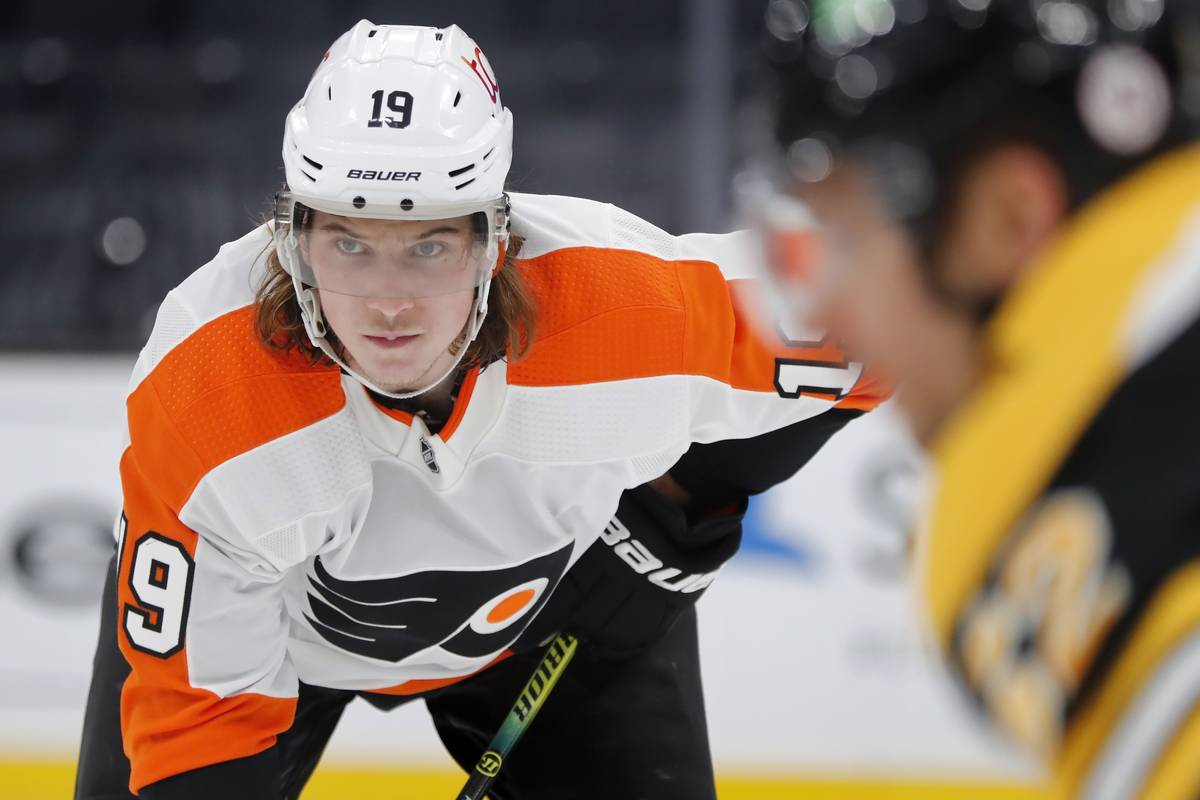 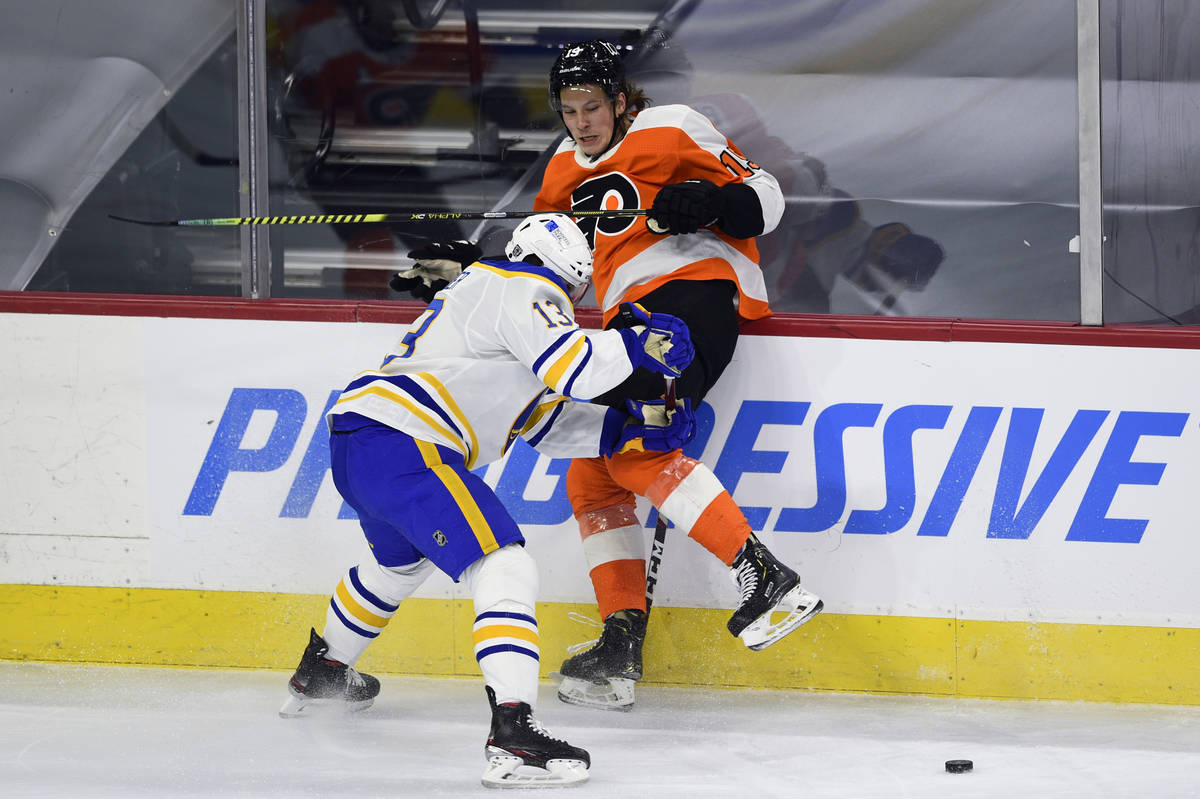 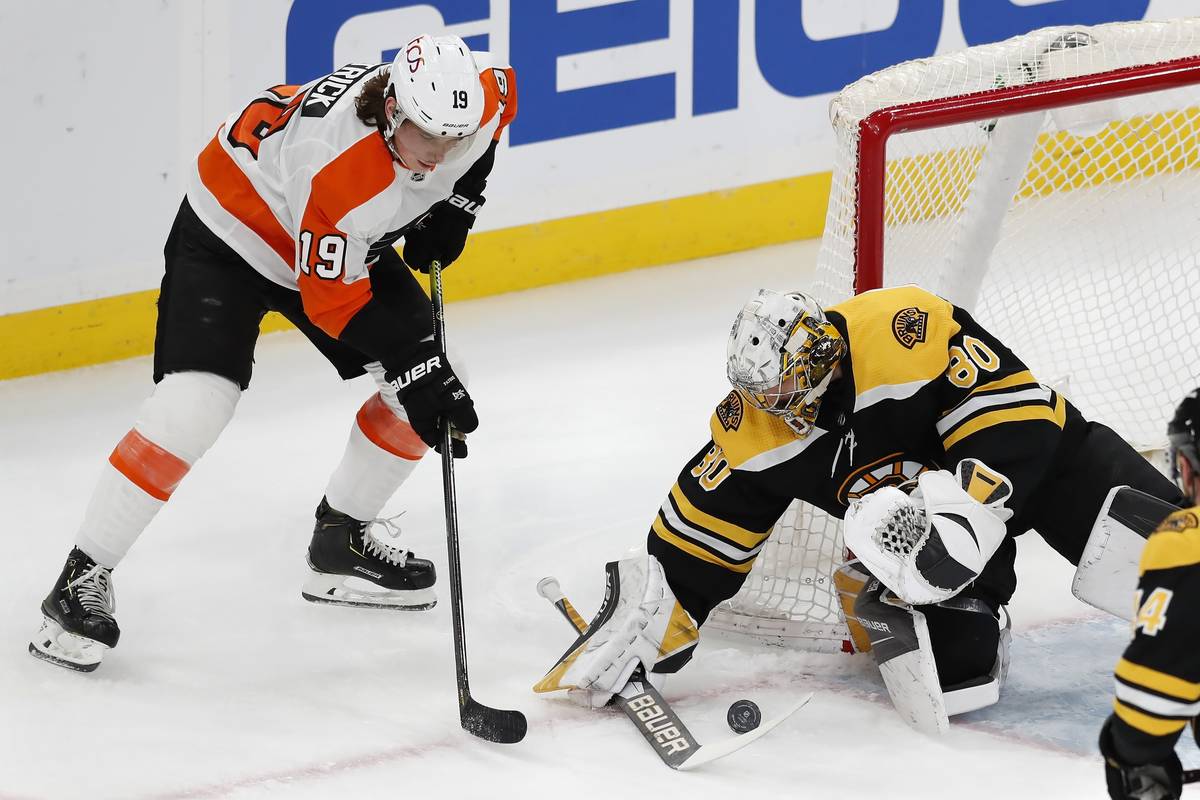 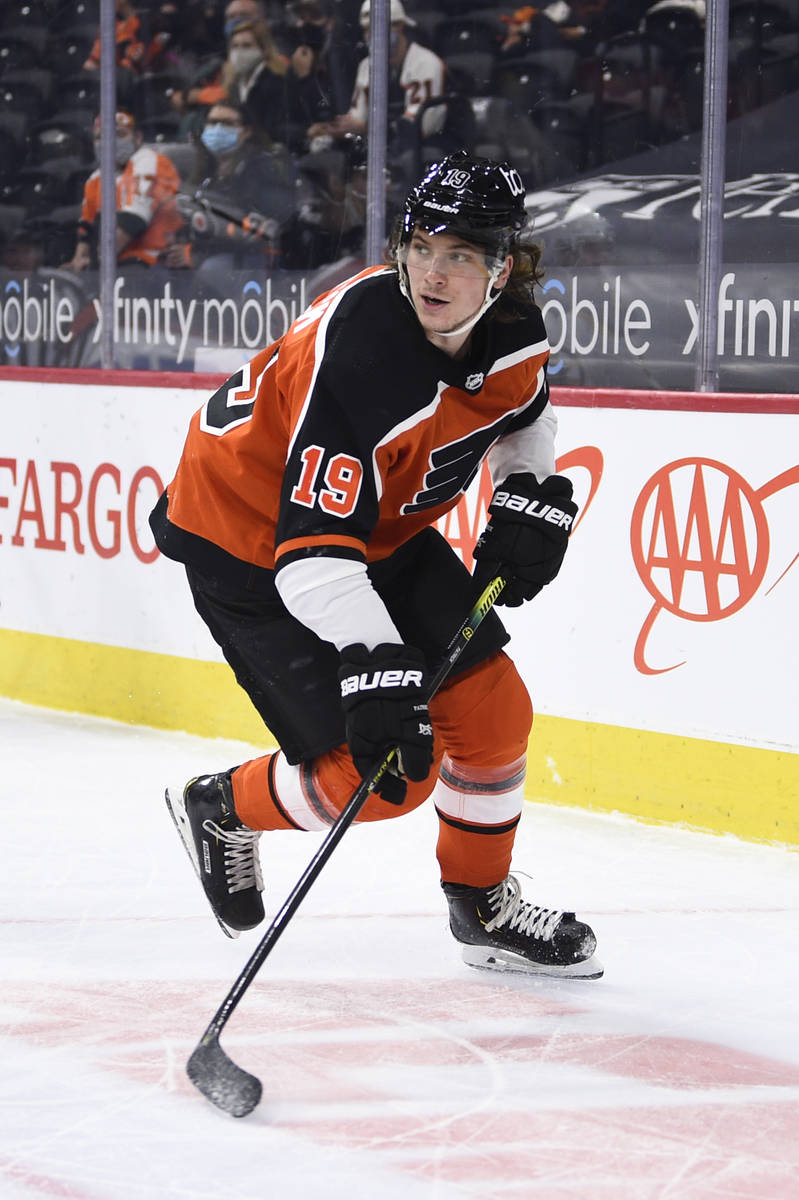 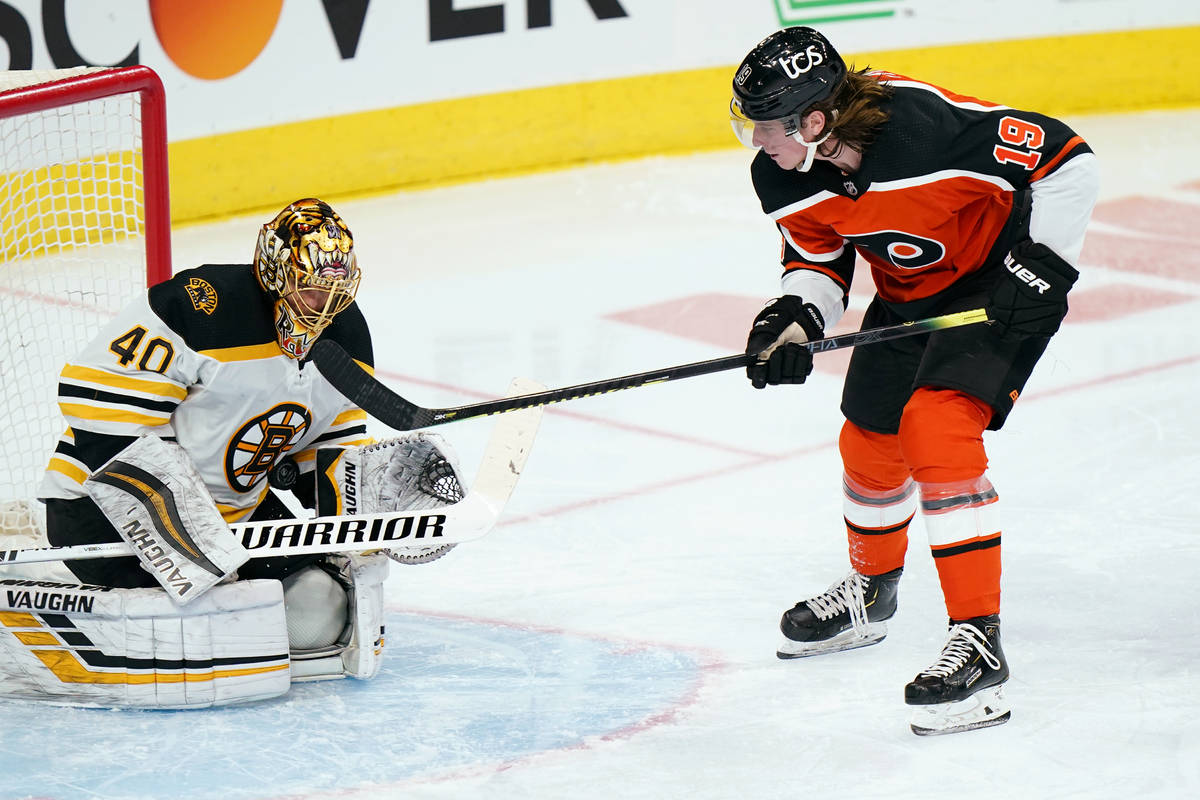 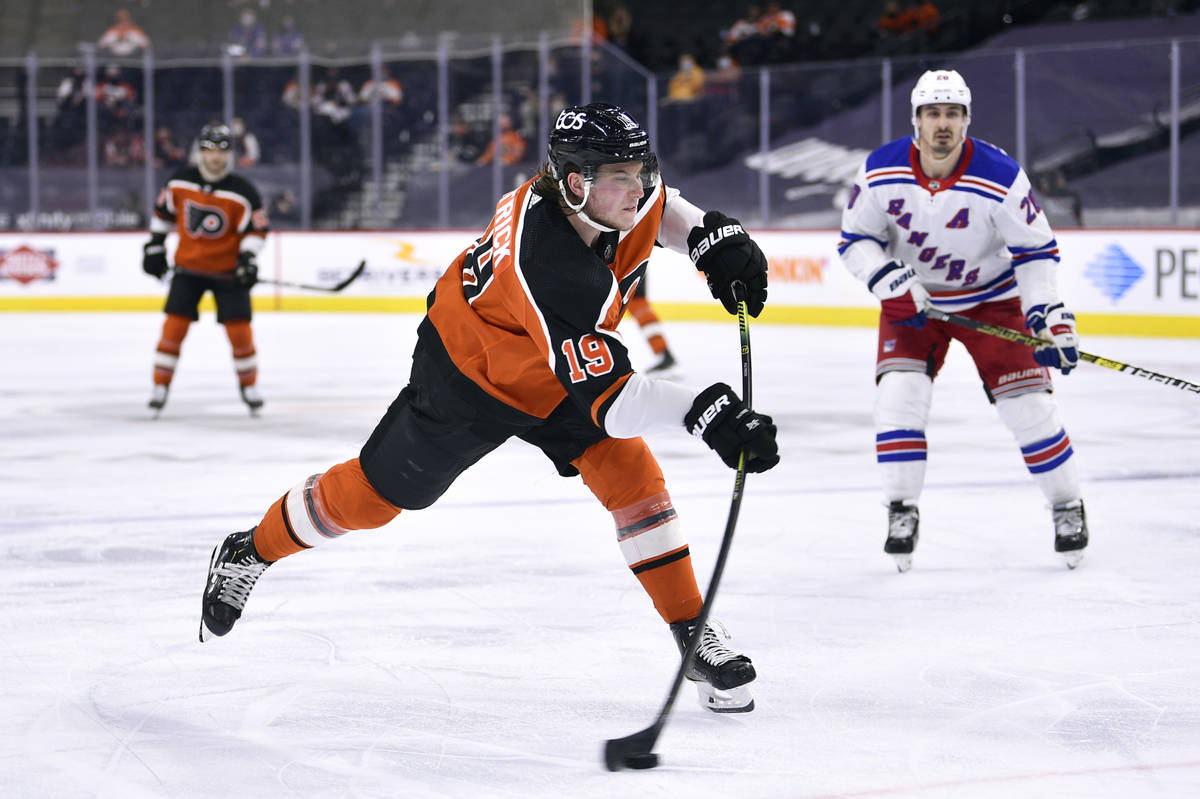 FILE - In this Saturday, March 27, 2021 file photo, Philadelphia Flyers' Nolan Patrick takes a shot on goal during the third period of an NHL hockey game against the New York Rangers in Philadelphia. On Saturday, July 17, 2021, the Flyers sent defenseman Philippe Myers and restricted free agent center Patrick to the Predators for Ryan Ellis. (AP Photo/Derik Hamilton)

Nolan Patrick called this the most important offseason of his life. And that was before the 22-year-old center was traded to the Golden Knights.

After falling short of the lofty expectations set for him in Philadelphia, the oft-injured Patrick is ready to hit the reset button on his promising career.

“I think a fresh start was the best thing for me,” Patrick said Monday. “Coming to an organization like Vegas is obviously extremely exciting. For my offseason training, I’m extremely motivated after the season I had. Looking for a bounce-back year. I’ve been doing everything I can to get myself ready for the first game.”

Patrick was acquired by the Knights on Saturday for center Cody Glass in a swap of underperforming prospects from the 2017 draft.

The Flyers selected Patrick second overall, four spots ahead of Glass, and he reached the 30-point mark in each of his first two seasons.

But Patrick also absorbed multiple hits to the head, and his progress was halted when he was struck in the back of the head by a shot from New York Islanders forward Cal Clutterbuck on March 3, 2019.

That summer, Patrick suffered from headaches during his offseason workouts. He sat out training camp and was diagnosed with a migraine disorder that sidelined him for the 2019-20 season.

But Patrick indicated Monday he was dealing with concussion symptoms while sitting out.

“Injuries are part of the game, and my concussion was obviously the tough one keeping me out that long,” Patrick said. “It was pretty scary times, but happy to be healthy now.”

The migraine disorder/concussion was the latest in a long line of injuries Patrick endured dating to a broken collarbone when he was 13.

He also was hampered by a hernia during his junior hockey career and missed multiple games in his draft year with undisclosed injuries.

“I’ve obviously had a lot of my offseason training limited due to injuries in the last couple years,” Patrick said. “I’m just excited to have the full summer of training and looking forward to the season.”

Patrick struggled to find his game this past season for Philadelphia once he returned and produced four goals and nine points in 52 games. His minus-30 rating was tied for the second-worst in the NHL.

Patrick admitted during his exit interview in Philadelphia that he was avoiding contact at the start of the season with the migraine disorder still weighing on his mind.

His conditioning suffered after an abbreviated training camp, and Fletcher indicated Patrick’s skating fell off in the second of back-to-back games.

Now healthy, the 6-foot-2-inch, 198-pound Patrick is looking to get stronger and more explosive this offseason.

“We’re both really excited,” said center Brett Howden, acquired by the Knights from the Rangers on Saturday in a separate move. “We actually train and skate together in Winnipeg, so pretty special for us to be going together. He’s a really special, dynamic player. For Vegas to get him as well, it’s obviously huge for the team.”

Patrick played primarily on the third line in Philadelphia, and he could fill a similar role for the Knights. He showed solid advanced stats with a 50 percent shot attempts percentage and also won 52.6 percent of his faceoffs last season.

Patrick is a restricted free agent, and his minimum qualifying offer is $917,831, according to CapFriendly.com.

“Obviously it was a pretty exciting day for me and my family when I got moved there,” Patrick said. “It makes me a lot more comfortable coming to a new team being around (McCrimmon) for a while and knowing him.”