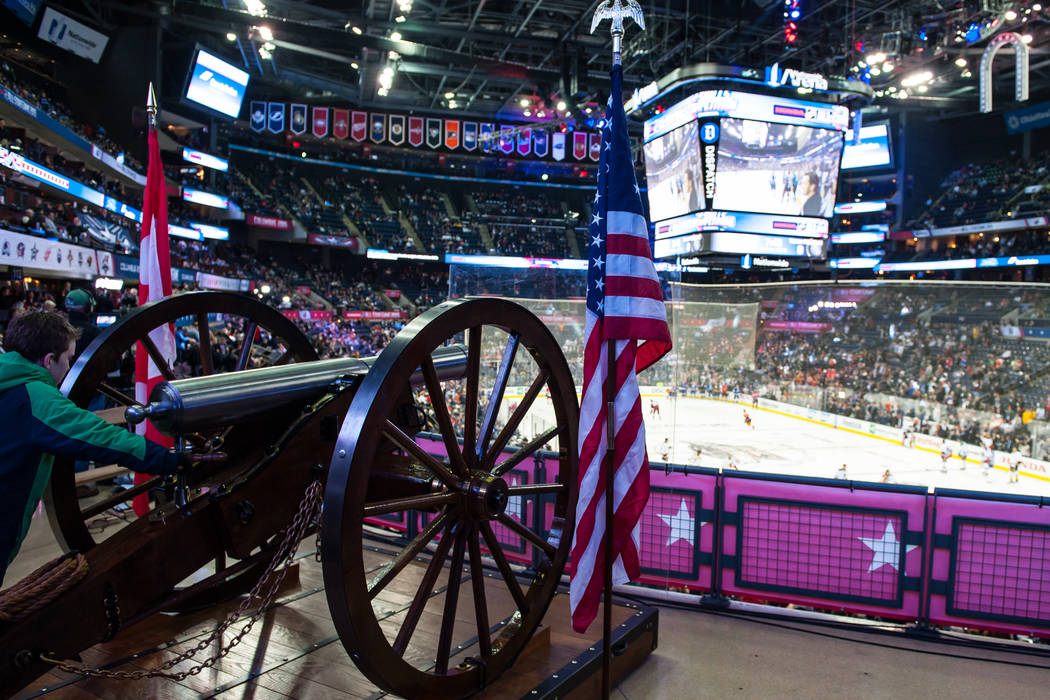 COLUMBUS, Ohio — Mike Todd had no idea what was in store for him that day in rural Illinois more than 12 years ago.

The longtime in-arena host for the Columbus Blue Jackets had traveled nearly 500 miles to see a Civil War replica cannon fired. What he witnessed turned out to be a watershed moment for the fledgling franchise that entered the NHL in 2000.

“I really don’t know if we needed it, but you’re glad it’s there,” Todd said prior to Tuesday’s game against the Golden Knights. “It’s one of the identifying features of our game experience.”

Just like the Cirque du Soleil acts before Knights games, the Blue Jackets Cannon has become synonymous with the team since it was purchased in the summer of 2007 and stationed above Section 111 at Nationwide Arena.

Most opposing players and coaches can’t stand the thing.

But to the Blue Jackets and their fans, there’s nothing better than hearing it go off.

“As a visitor, the first time you hear it, it’s like, ‘Why so loud?’ ” said Golden Knights left wing Jonathan Marchessault, who spent two seasons in the Blue Jackets organization. “But it’s kind of their trademark. It’s original for them, and it works for their image.”

The Blue Jackets name is a reference to Ohio’s role during the Civil War, and using a cannon on game days had been discussed within the organization for a few years, according to Todd.

When the team hired Ken Hitchcock, a noted Civil War buff, as coach in November 2006, the idea gained more traction.

After searching on the internet for cannon builders, Todd and then-director of game operations Kimberly Kershaw traveled to Pontoon Beach, Illinois, near St. Louis prior to the start of the 2007-08 season to meet with Chris Olson.

Olson wheeled a replica 1857 Napoleon cannon out of his garage and first fired it using gun powder.

“It sounded like a gun going off, which was loud,” Todd recalled. “He says, ‘OK, now you want to hear it with some cannonball powder in it?’ ”

Kershaw was on the phone with former Blue Jackets executive vice president of business operations Larry Hoepfner when the cannon went off the second time.

“I think Larry was like, ‘Holy (expletive)! Get that thing to Columbus right now!’ ” Todd said.

Since its arrival, the cannon has become the main attraction at Blue Jackets’ games. Visiting fans want to pose next to it for pictures, and it’s a popular spot for marriage proposals, as well.

“A lot of people, when they come to Nationwide Arena, it’s kind of where they make a beeline towards,” said Dave Gauthier, a member of the Cannon Crew that tends to the cannon on game days. “When people ask me what are my favorite aspects of the job, oddly enough it’s the away fans that are coming and seeing it for the first time.”

The cannon goes off at the start of each game when the Blue Jackets take the ice and after every goal by the home team. But it doesn’t fire in the traditional sense.

A local pyrotechnic company loads the cannon with electric charges to make the flash and smoke from the barrel, and it’s synchronized with a concussion charge that is set off in the rafters to create the 105-decibel blast.

Gauthier, who’s in his sixth season as a member of the Cannon Crew, admitted he’s still startled on occasion.

“I do remember my first game here (with Anaheim in 2014). It scared the crap out of me,” said Knights center William Karlsson, who played two full seasons with the Blue Jackets. “No warning, nothing. So, I just jumped on the bench. It’s pretty loud.”

Washington’s T.J. Oshie famously hates the cannon, and several players came to loathe it during the 2015 All-Star Game in Columbus.

But it’s become a symbol of the Blue Jackets franchise, so much so that it’s featured on the team’s alternate jerseys and is included on a shoulder patch that adorns the home and away jerseys.

“It’s just become an extension of the fan base,” Todd said. “You think of other places you go to watch a sporting event and all the personality the different venues or stadiums have. Well, this is a part of our game-day experience.

”And doggone it, we want to hear that thing go off more often than not because that means we scored a goal.”