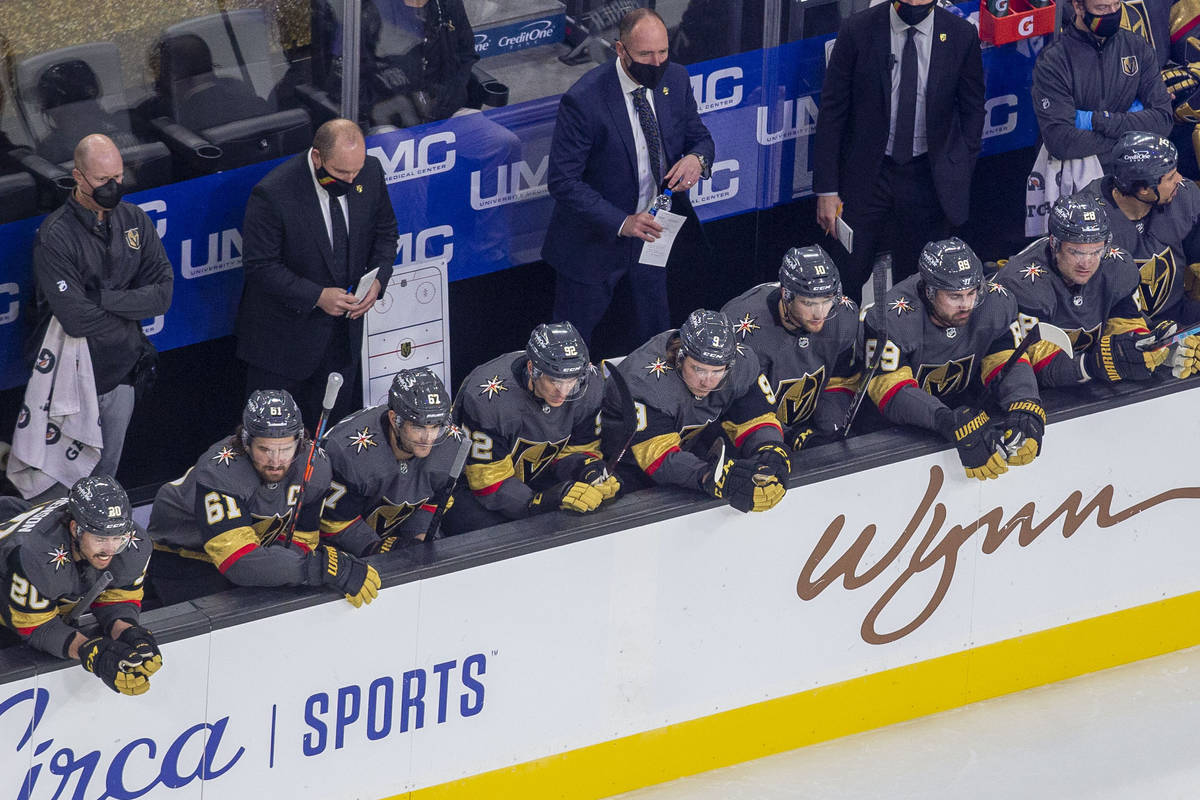 Vegas Golden Knights head coach Pete DeBoer, back center, holds his water bottle as he coaches from the team's bench during the second period of an NHL season-opening game against the Anaheim Ducks on Thursday, Jan. 14, 2021, during the period at T-Mobile Arena in Las Vegas. (Heidi Fang/Las Vegas Review-Journal) @HeidiFang

With two power play units that he believes can be productive, it stands to reason Golden Knights coach Pete DeBoer wants as many opportunities as possible with the man advantage.

If that means he has to stick up for his group and lobby for a few more calls, then so be it.

DeBoer said following Saturday’s 2-1 win over Anaheim he was “at a loss” for why the Knights weren’t drawing more penalties. It’s a situation he hopes changes in the four-game series against Arizona starting Monday at T-Mobile Arena.

“Part of it is we have to look in the mirror and say, ‘Are we attacking the tough areas of ice and the scoring areas of the ice enough to draw those penalties?’ And part of it is when you look at the tape, I think we are,” DeBoer said Sunday following practice at City National Arena.

“Where the standard usually is at this time of year, why aren’t we getting those calls? That’s the other side of it, and I can’t answer that one.”

The Knights had two power plays in the two games against Anaheim, the fewest chances of any team that’s played thus far. Their lone opportunity Saturday came because Ducks forward Jakob Silfverberg cleared the puck over the glass in the third period and picked up a delay of game penalty.

But their failure to draw penalties predates this season. The Knights ranked 25th in the league in number of penalties drawn every season since 2017-18.

Contrast that with new division opponent Colorado, which finished in the top three in penalties drawn each of the past three seasons. Or Stanley Cup champion Tampa Bay, which has been in the top five for most penalties drawn in that stretch.

“I think our group is Abe Lincoln honest, if I can put a word on it,” DeBoer said. “They’re not going to dive or embellish, and that’s what you love about them. We’re not looking for those calls, and we’re not prepared to do that as a group to get the calls.”

The NHL is hoping to reduce travel for officials during the coronavirus pandemic, meaning teams will often see the same officiating crew multiple games in a row. For example, referees Gord Dwyer and Ian Walsh, and linesmen Brandon and Travis Gawryletz worked both games of the Knights-Ducks series.

DeBoer, who has a law degree, is clearly trying to plant a few seeds in the officials’ heads. If it leads to a few more calls down the road, it was worth it.

Left wing Jonathan Marchessault leads the Knights in most penalties drawn since 2017-18 with 60. That ranks 65th in the league and is well behind league leaders Tom Wilson of Washington (113) and Calgary’s Matthew Tkachuk (112).

“It’s surprising we don’t get more penalties since we have more shots, more puck control in the o-zone and stuff like that,” Marchessault said. “Maybe they’re letting us play a little more this year and they’re allowing a little bit more stuff. It’s just the way it is.

“But we’re a fast team and I think it’s a question of time that we’re going to generate more penalties. For our group especially with two pretty good units, I think our power play is going to be really dangerous.”