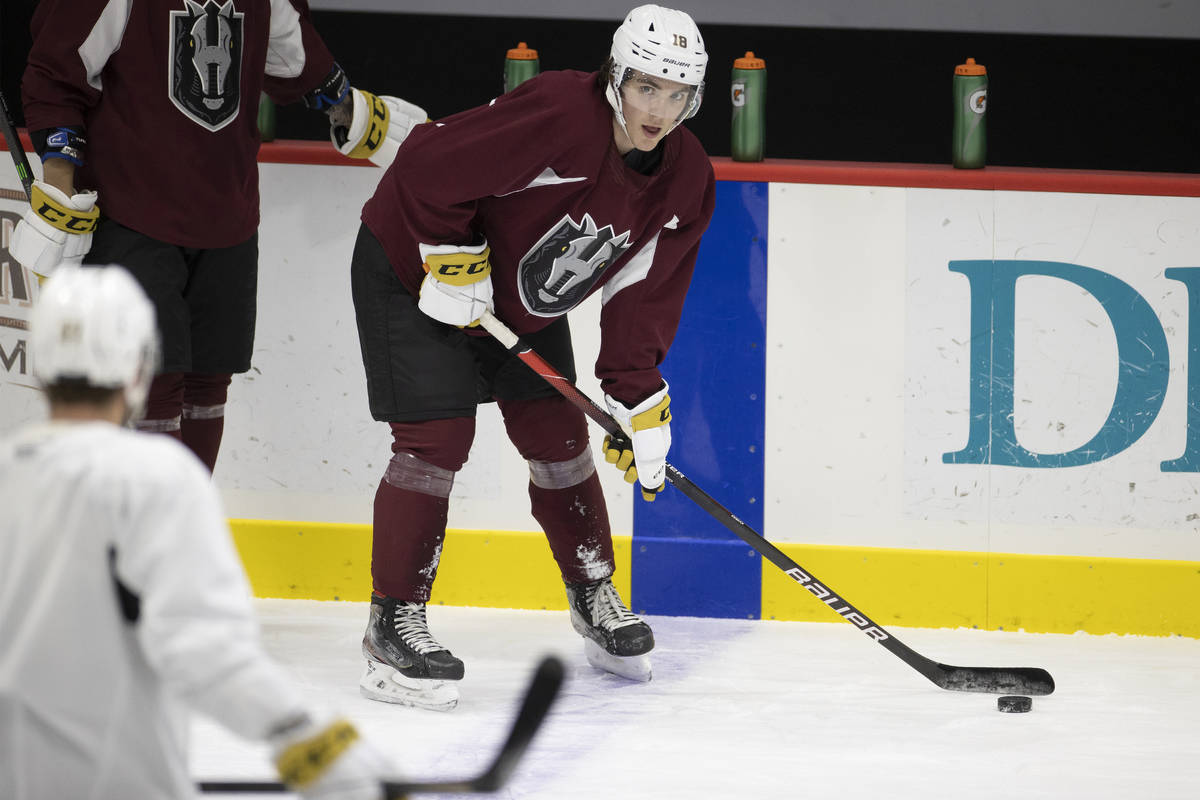 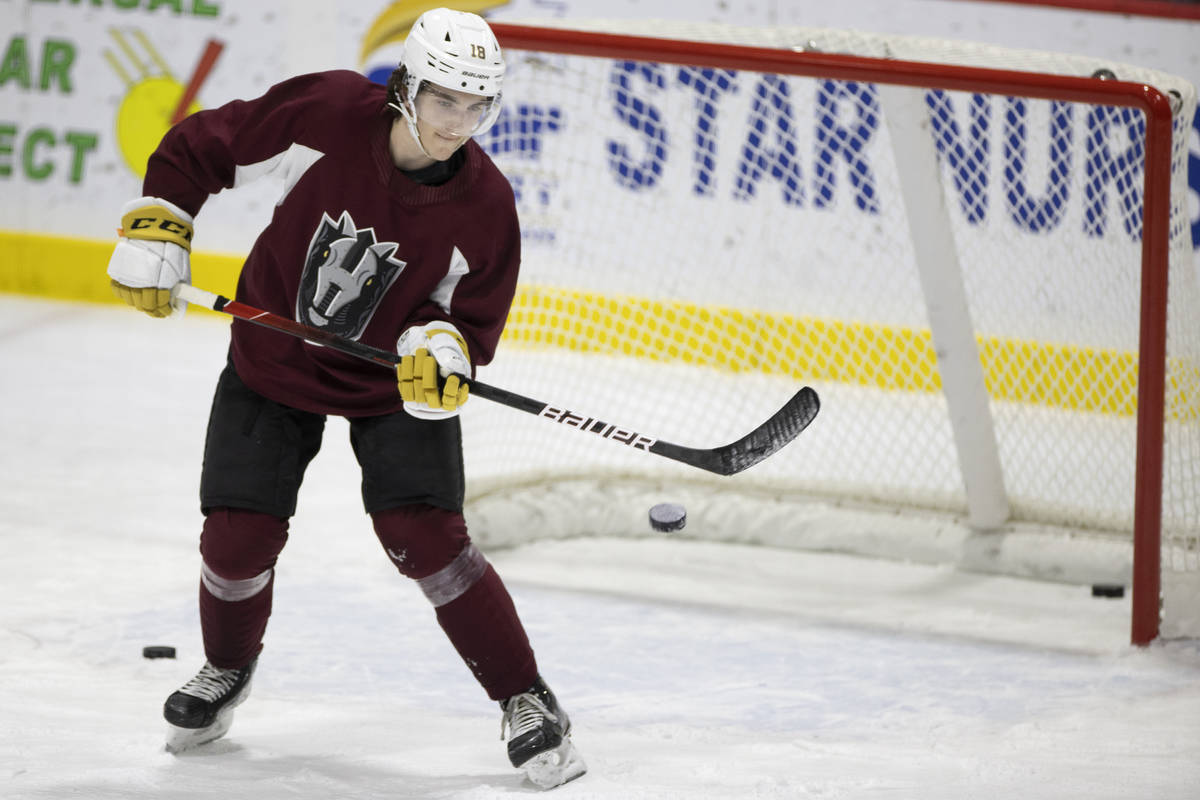 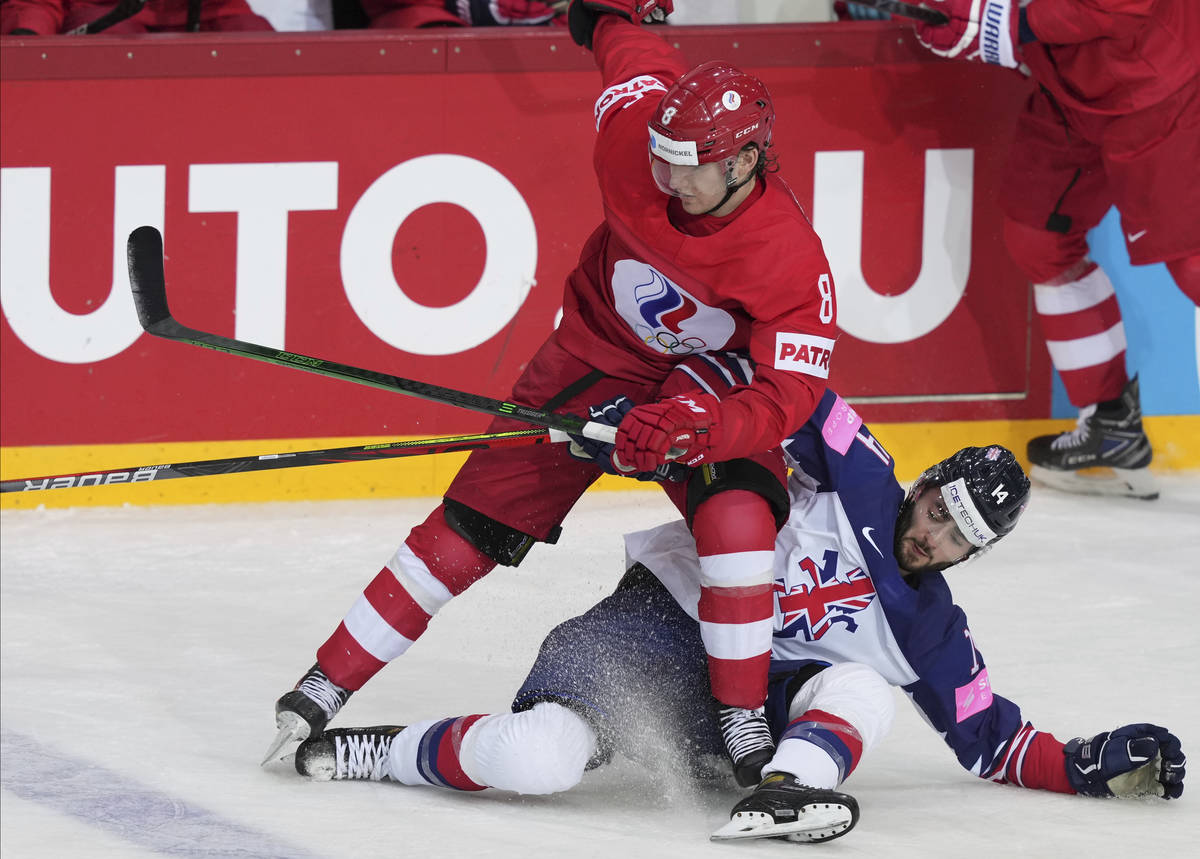 Liam Kirk of Great Britain, right, and Ivan Morozov of Russia fight for the puck during the Ice Hockey World Championship group A match between Great Britain and Russia at the Olympic Sports Center in Riga, Latvia, Saturday May 22, 2021. (AP Photo/Roman Koksarov) 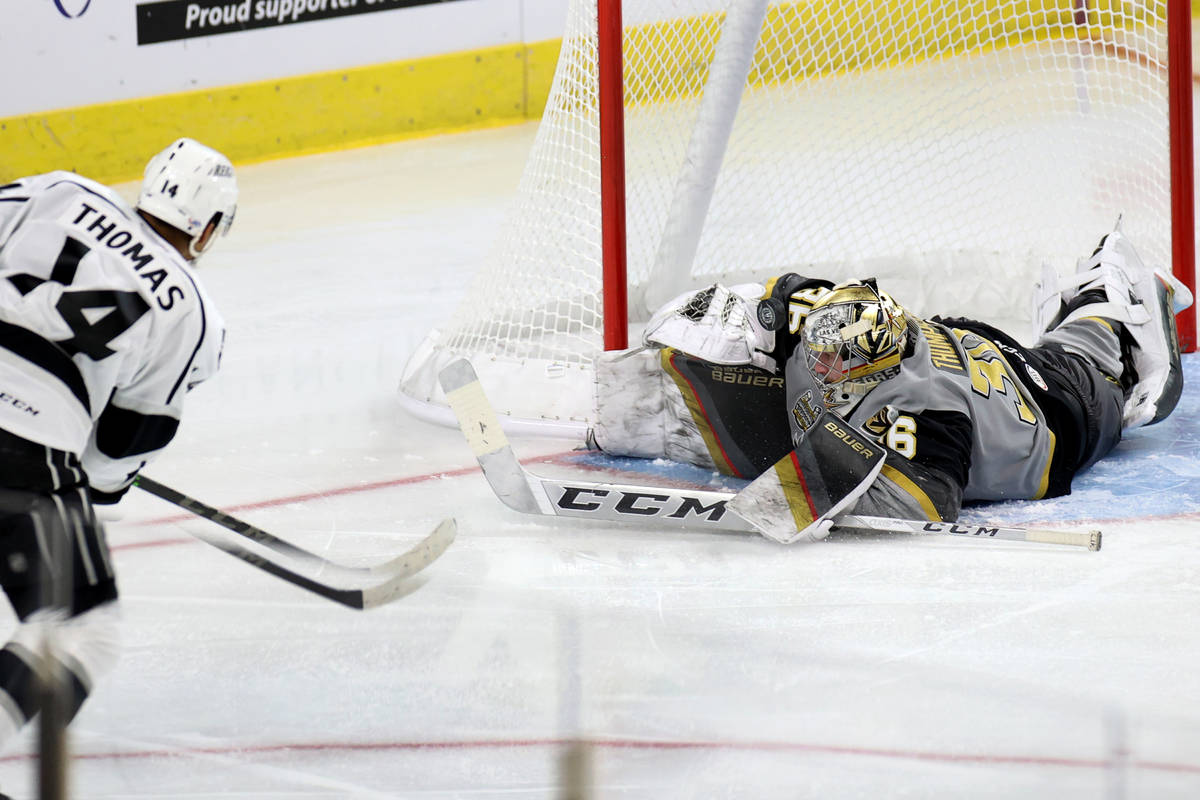 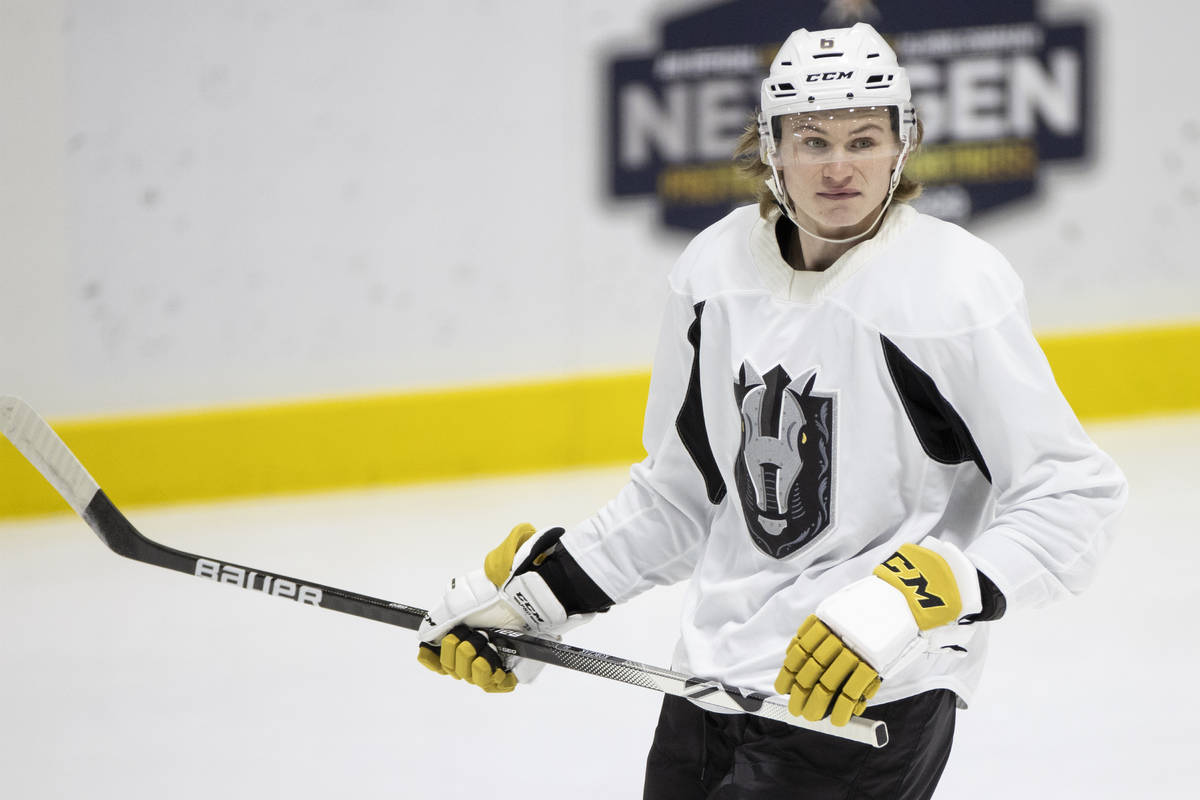 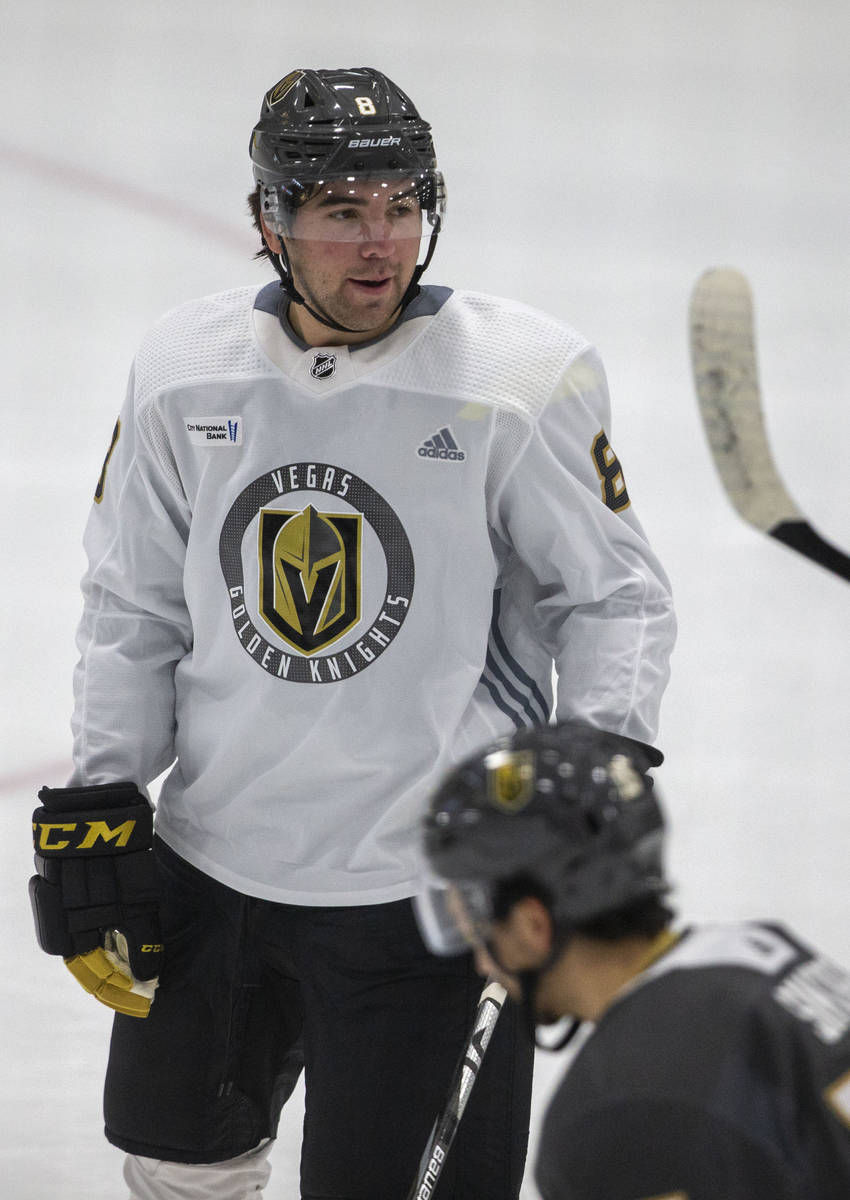 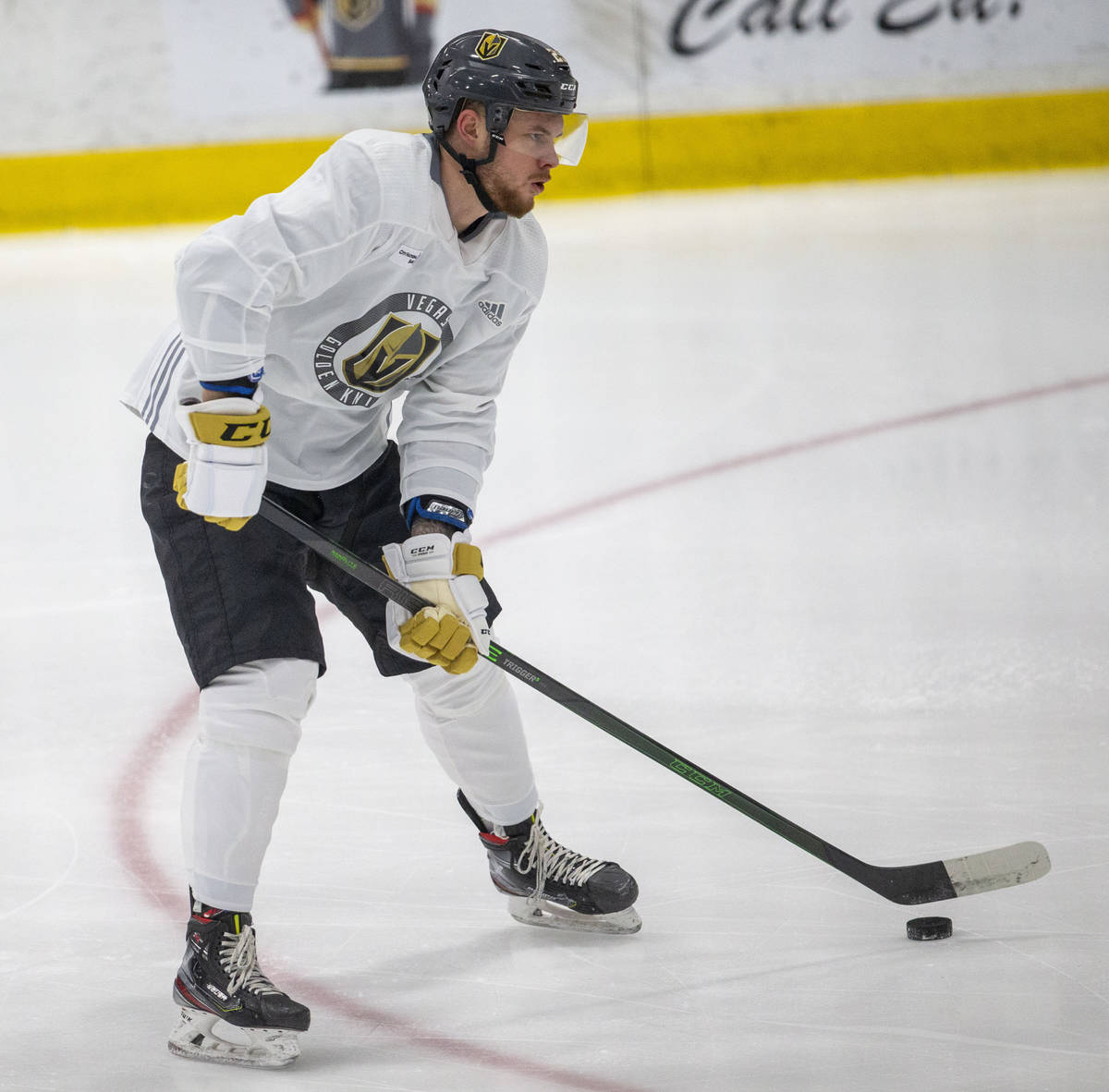 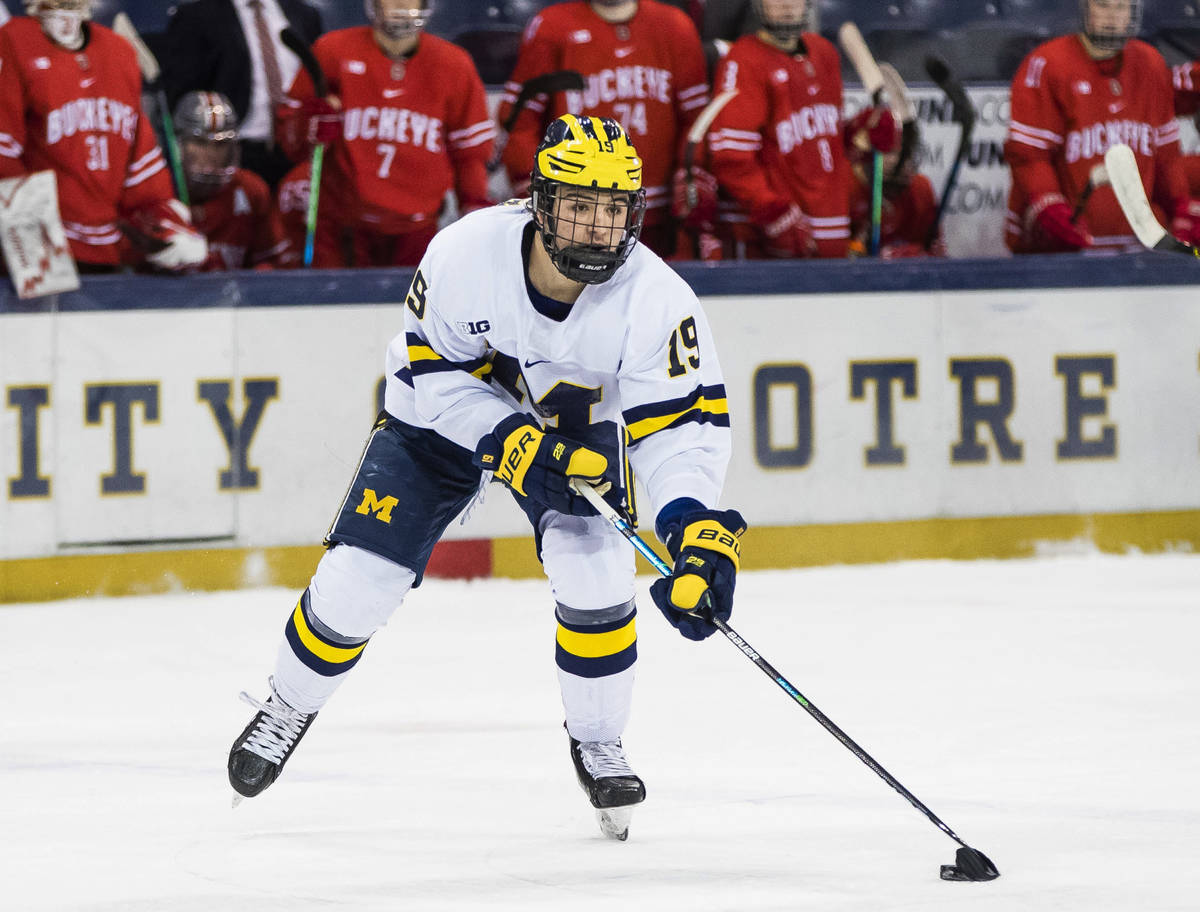 Peyton Krebs has something that no other Golden Knights youngster possesses.

“If there’s players that have that ‘it’ factor, he seems to be one of those players that really just finds a way to be a really effective, productive player,” general manager Kelly McCrimmon said.

He picked up an assist in his NHL debut May 3 against Minnesota and made a strong impression on the coaching staff before suffering a season-ending broken jaw when he was struck by a shot from teammate Shea Theodore on May 8.

Krebs, 20, produced five points in five games with the Silver Knights in the American Hockey League, then claimed player of the year honors in the major junior Western Hockey League.

The forward also practiced with the Golden Knights during the NHL playoffs for the second straight postseason.

Krebs is part of a deep group of forwards but is expected to push for an NHL roster spot when training camp opens next month.

“It becomes more and more clear when you watch him play that his instincts and passion for the game really separate him,” McCrimmon said. “He’s a coach’s dream in terms of understanding the game and doing things the way you want them to be done and providing energy.”

Here is a look at the rest of the Knights’ top 10 prospects, with last year’s ranking in parentheses:

2. Kaedan Korczak (5) — The right-shot defenseman was on the verge of making his NHL debut last season after being selected in the second round in 2019. Korczak, 20, appeared in all five Silver Knights playoff games and drew praise from coach Manny Viveiros.

3. Ivan Morozov (6) — The second-round pick in 2018 is under contract in Russia for one more season. Morozov, a 21-year-old center, had 31 points in 55 games for SKA St. Petersburg last season and also represented Russia at the 2021 world championship.

4. Brendan Brisson (4) — The Knights’ first-round pick in 2020 had a solid freshman season at Michigan. Brisson, a 19-year-old center, shared the team lead with 10 goals in 24 games and was especially effective on the power play, notching seven of his 21 points.

5. Lukas Cormier (10) — He was named defenseman of the year in the Quebec Major Junior Hockey League after posting 54 points in 39 games. Cormier’s stock continues to rise, and the 19-year-old could represent Canada at the next world junior championship.

6. Jack Dugan (3) — The winger was second on the Silver Knights with 33 points in 37 games and ranked second in scoring among rookies in the AHL last season. Dugan, 23, continues to improve defensively and should get a long look in training camp.

7. Zach Dean (NR) — A first-round pick in 2021, Dean, 18, posted 20 points in 23 games last season for Gatineau after being slowed by a broken wrist he sustained during the preseason. The speedy center made the QMJHL all-rookie team in 2019-20.

8. Lucas Elvenes (2) — The 22-year-old forward remains a promising point producer despite slipping on this list. Elvenes finished fourth on the Silver Knights with 24 points in 37 games and averaged 0.75 points per game in his first two AHL seasons.

9. Logan Thompson (NR) — The undrafted Thompson continued his remarkable rise when he was named goaltender of the year in the AHL. The 24-year-old made his NHL debut in relief last season and is No. 3 on the organization’s depth chart.