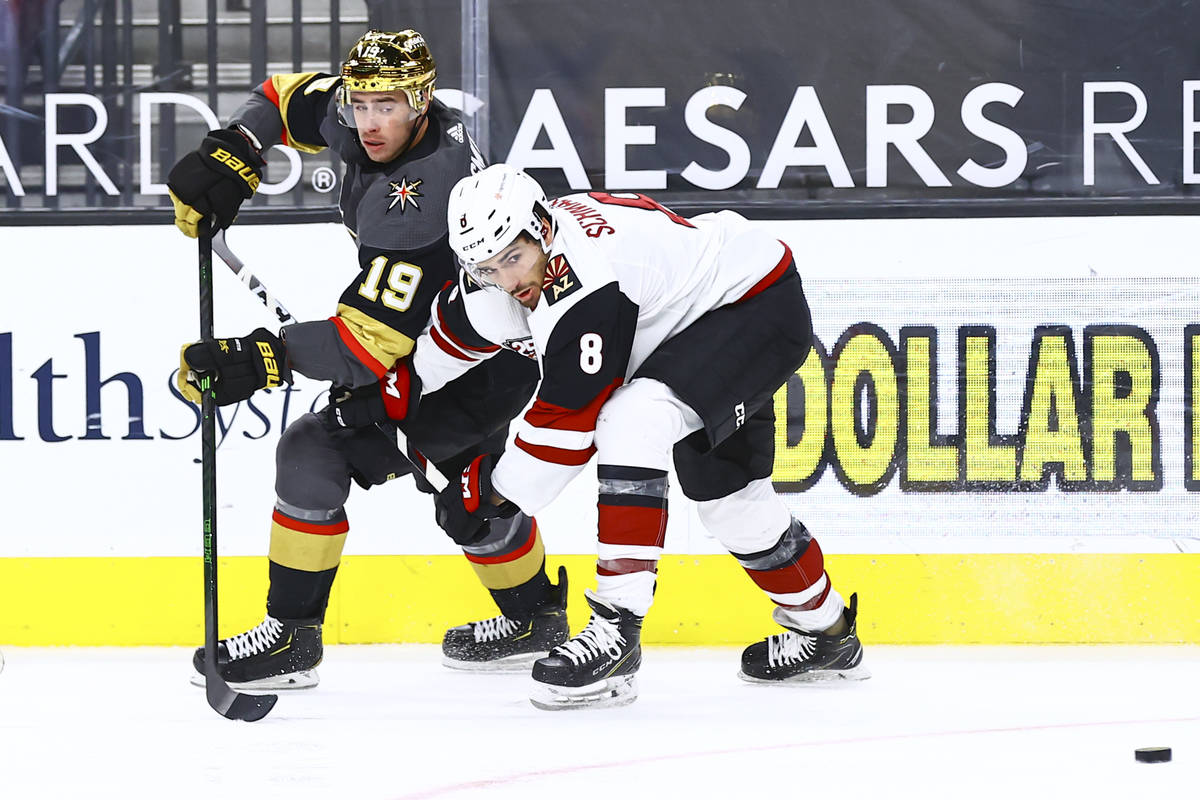 The Golden Knights might get two skaters back for Wednesday’s crucial matchup against the Colorado Avalanche. But they also could be down two.

Right wings Reilly Smith and Keegan Kolesar practiced with the Knights on Tuesday after both missed multiple games. Smith hasn’t played since April 18 with an undisclosed injury, and Kolesar hasn’t appeared since April 11 because of a hip injury.

The Knights practiced without centers Tomas Nosek and Nicolas Roy on Tuesday. Nosek and Roy left Saturday’s game against the Anaheim Ducks early.

DeBoer said Nosek’s return isn’t imminent, but he’s not worried about his absence lingering late into the season or into the playoffs. Roy is considered day to day.

“I’m not ruling (Roy) out at any point here,” DeBoer said. “We’ll see how he feels tomorrow and go from there. Definitely not in the same boat as Nosek.”

The injury news will help the Knights in certain areas but create holes in others.

Smith is one of the team’s best all-around players and was back in his spot on the second line Tuesday. He’s having his worst offensive season with the Knights with 16 points in 44 games.

“He’s been one of our best players since the beginning, and he’s a great player in the NHL,” left wing Jonathan Marchessault said. “He shows up every night. It’s a great boost.”

While Smith’s return would bring the team’s top six to full strength, being without Nosek and Roy would leave it thin down the middle. Forward Mattias Janmark and Kolesar lined up at third- and fourth-line center at practice Tuesday despite usually playing on the wing.

Both will have to perform well to match Nosek’s and Roy’s production recently. Nosek has 15 points in his last 20 games, and Roy has eight in his past 12.

Defensemen Brayden McNabb and Shea Theodore have partnered since the Knights switched their top two defensive pairs April 14 against the Los Angeles Kings.

They have been effective together. In four seasons, the Knights have outscored their opponents 33-22 with the two on the ice at five-on-five.

“Theo, you know, he skates really well,” McNabb said. “He gets up the ice very smoothly and easily, and when you give him the puck, good things are going to happen.”

Krebs, 20, led the WHL in scoring with 42 points in 23 games entering Tuesday’s action. General manager Kelly McCrimmon said after the trade deadline that Krebs would rejoin the Silver Knights when his junior season ended.

Krebs played five games with Henderson to start the season and had a goal and four assists.