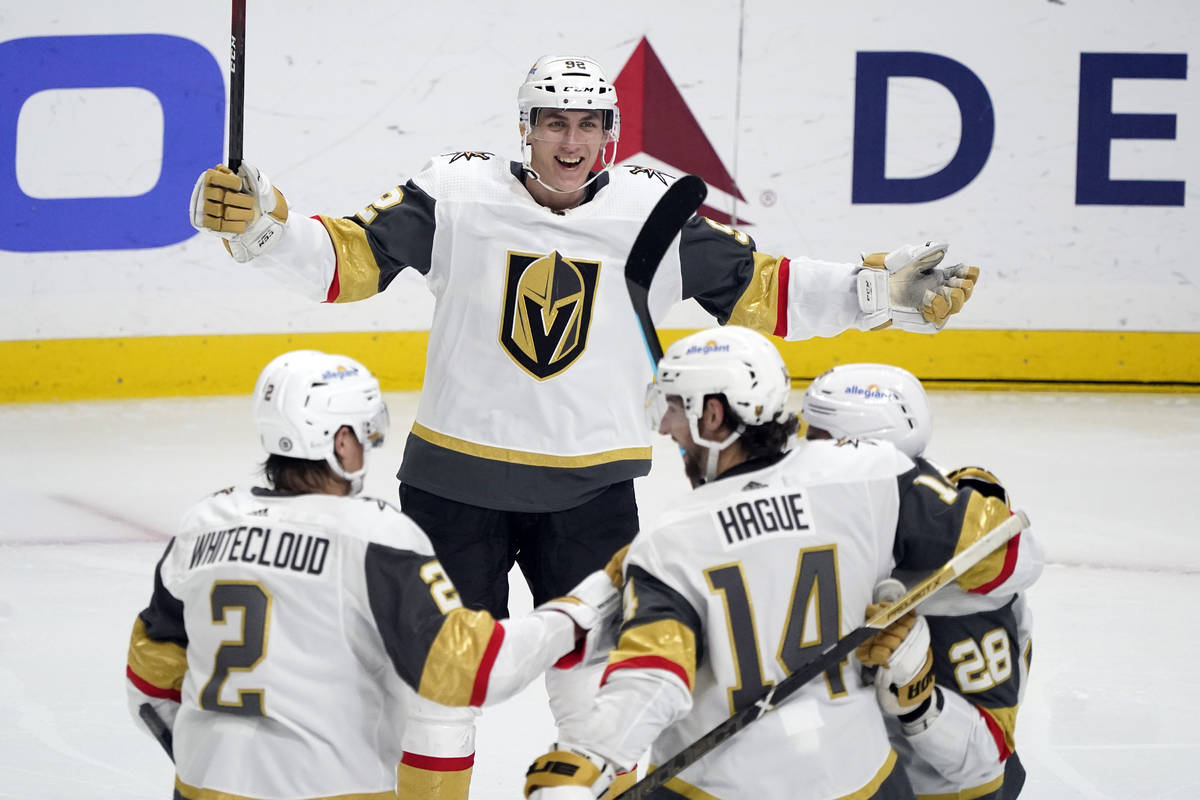 Robin Lehner insisted this week he was ready to play and was patiently waiting for the Golden Knights to decide when he would start.

That assignment came Friday, and the goaltender turned in a strong effort in his first appearance since Feb. 7.

Lehner finished with 23 saves and backstopped the Knights to a 4-2 victory over the Los Angeles Kings at Staples Center in Los Angeles.

“Listen, with what he’s gone through the last five weeks, the ups and downs of a concussion to begin with and you throw in some of the other things that he’s talked about, it hasn’t been an easy journey,” coach Pete DeBoer said. “But he’s worked hard. I know the guys wanted to play hard for him here tonight.”

Lehner sustained a concussion during the morning skate Feb. 11 and missed his start that evening. He was placed on long-term injured reserve, and Marc-Andre Fleury started 17 of 18 games in his absence.

Lehner practiced with the Silver Knights on a conditioning loan to the American League Hockey club last week and rejoined the Golden Knights on Monday. After backing up Fleury on Wednesday against the Sharks, Lehner picked up his fourth win in six starts.

Lehner’s best sequence came midway through the third period when he stopped Jeff Carter on the rush and belly-flopped across his crease to keep out Andreas Athanasiou’s rebound attempt.

“I thought everybody on our team played a strong game tonight, Robin obviously included,” winger Max Pacioretty said. “It’s not easy to come back after such a long time off. He kind of picked up and fit in right away, which was nice to see.

“We have a one-two punch that’s very dangerous, and hopefully as the season goes on, we’re able to use that to our advantage. It was nice to get the win for Robin, but he definitely deserved it as well.”

The Knights are at the bottom of the NHL statistics in scoring tip-in goals since 2017-18, tied with Arizona. They entered Friday with six tip-in goals, tied with four other teams for 22nd overall.

But William Karlsson was credited with a tip-in goal in the second period to put the Knights ahead 3-2. William Carrier also got a piece of Nic Hague’s shot for a 4-2 lead in the third period, although the official play by play classified the goal as a slap shot for some odd reason.

“I think you guys have heard me talk on the nights we haven’t had a lot of success it’s usually been because we haven’t got to those areas of the ice,” DeBoer said. “L.A.’s got some physical guys back there on defense and some good defensemen, so I thought we did a good job of inside there in those tough areas.”

“Been working on it with (Ryan Reaves) here,” Carrier said. “Obviously he got a big one for us last game, and I got one here. I think we’re going to keep doing that. Just putting pucks to the point and trying to get a piece of it.”

Alec Martinez doesn’t really do sentimental. Therefore, his first trip to Staples Center as a visiting player was just another game to the defenseman.

“It was different. I actually had never been in this away room. Ever. I didn’t even know what it looked like,” Martinez said. “I needed to ask a couple of guys as to where things were. Obviously it’s a little different coming back here, coming into this building.”

Martinez faced his former club three times since he was acquired from Los Angeles on Feb. 19, 2020, but never on the road.

The two-time Stanley Cup champion had two assists Friday while logging a team-high 23:35 of ice time. He added four blocked shots to his total and is second in the league in that category.

Martinez has 13 assists, matching his total from last season in 51 games.

“Really, at the end of the day, it’s a business,” Martinez said. “I knew that this was going to happen at some point or another. Obviously really happy with where I’m at.”

DeBoer was able to roll over his forward lines and preserve the legs of his top players for the busy schedule. Mark Stone was the lone forward to exceed 18 minutes of ice time, though Pacioretty was at 17:59.

The play of the fourth line made that possible, as Carrier, Tomas Nosek and Reaves combined for eight shots attempts (five on goal) and generated seven scoring chances with two against at five-on-five.

“I thought our fourth line might have been one of our best lines with how they played,” DeBoer said. “That makes it easy when guys are going over the boards and tilting the ice in our favor makes it easy to do that.”