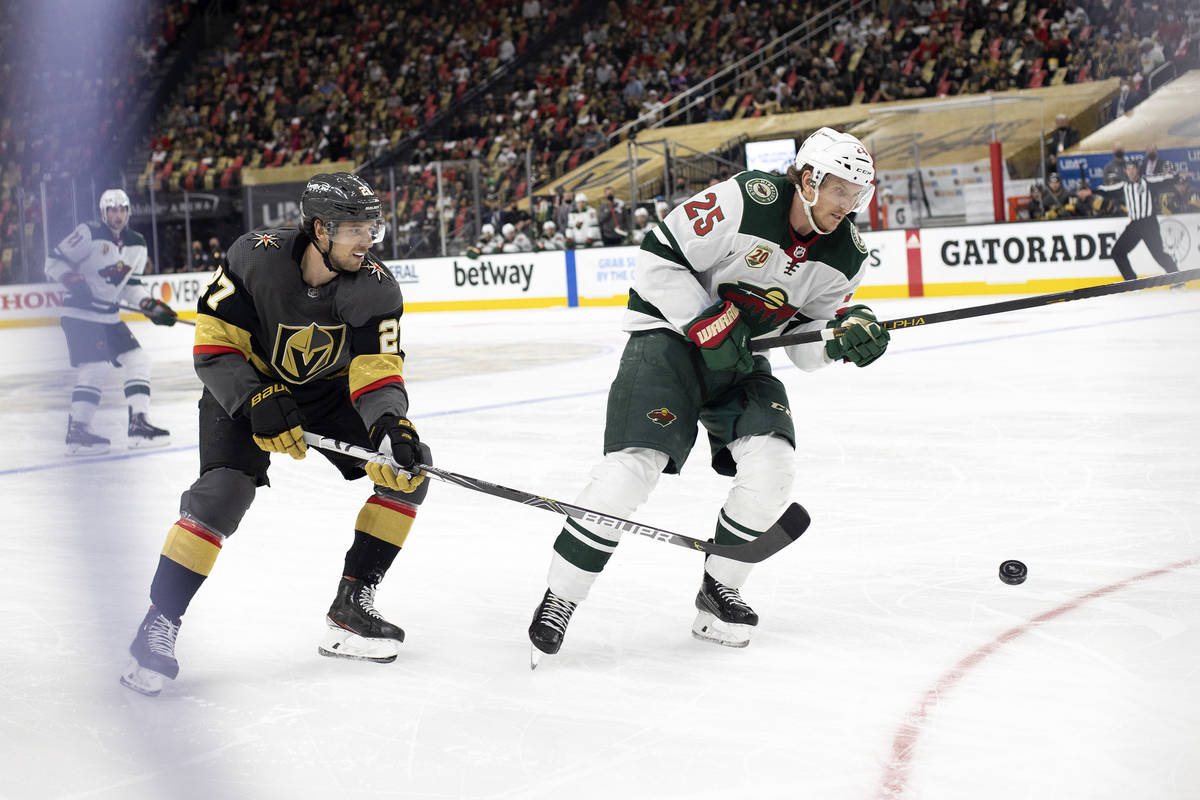 ST. PAUL, Minn. — Shea Theodore often serves as the supply line to the Golden Knights’ offense with his puck-moving skills.

But that outlet is being cut off by the Minnesota Wild, who haven’t given the defenseman much room to create.

Theodore hasn’t recorded a point through the first five games of the West Division first-round playoff series, extending his scoring slump that started in the regular season.

Despite the lack of production from their top-scoring blueliner, the Knights lead the best-of-seven series 3-2 entering Wednesday’s Game 6 at Xcel Energy Center.

“I think he’s playing well. I think he’s been really good defensively,” coach Pete DeBoer said Tuesday. “I still think he’s doing all the things he needs to do to be a world-class defenseman out there. He’s skating pucks, he’s breaking pucks out, he’s defending really well.”

Theodore was the Knights’ fourth-leading scorer in the regular season with 42 points and was second behind captain Mark Stone with 34 assists. He thrust himself into the conversation for the Norris Trophy as the NHL’s top defenseman with a productive April that included a stretch when he posted 11 points in eight games.

But since then Theodore has cooled off, with no points in his past 10 games, regular season and playoffs combined. His last assist came April 28, and he has one point this month.

To use a basketball analogy, Minnesota is running Theodore off the 3-point line, with the wingers pressuring hard at the point whenever he has the puck and taking away his ability to create.

In the series, Theodore has 16 shots on goal while 17 attempts have been blocked. Minnesota was especially hard on him in Game 2, blocking eight of his shots.

Wild wing Kirill Kaprizov has been noticeably active closing down Theodore near the blue line.

Kaprizov had 18 blocked shots in 55 regular-season games but has five in five games this series, with four coming against Theodore.

“Obviously, we know who their special people are and aware when they’re on the ice,” Wild coach Dean Evason said. “Their defense is so active and jumping into the play and part of their offense, but not unlike every other team in the National Hockey League. We have to look after their defense, no different than any other hockey club.”

In Game 5 on Monday, Theodore had four shots blocked and another three attempts that missed the net. But he started to find room in the second period, and the Knights’ offense opened up as a result.

The best chance came in the final four minutes when Alex Pietrangelo’s cross-ice pass to Theodore at the right point left the Wild defense scrambling to recover.

Theodore got winger Marcus Foligno to overcommit trying to block the shot and made a pass in front for Reilly Smith, who was hauled down by Wild defenseman Jonas Brodin for a penalty.

DeBoer said one way for Theodore to get going is on the power play, where the Knights are 2-for-13 in the series after scoring in Game 5.

“Theo’s a guy that’s a big piece of our power play, and when our power play is working, he’s getting points,” DeBoer said. “I’m not worried about the offense. I think that’s eventually going to come.”