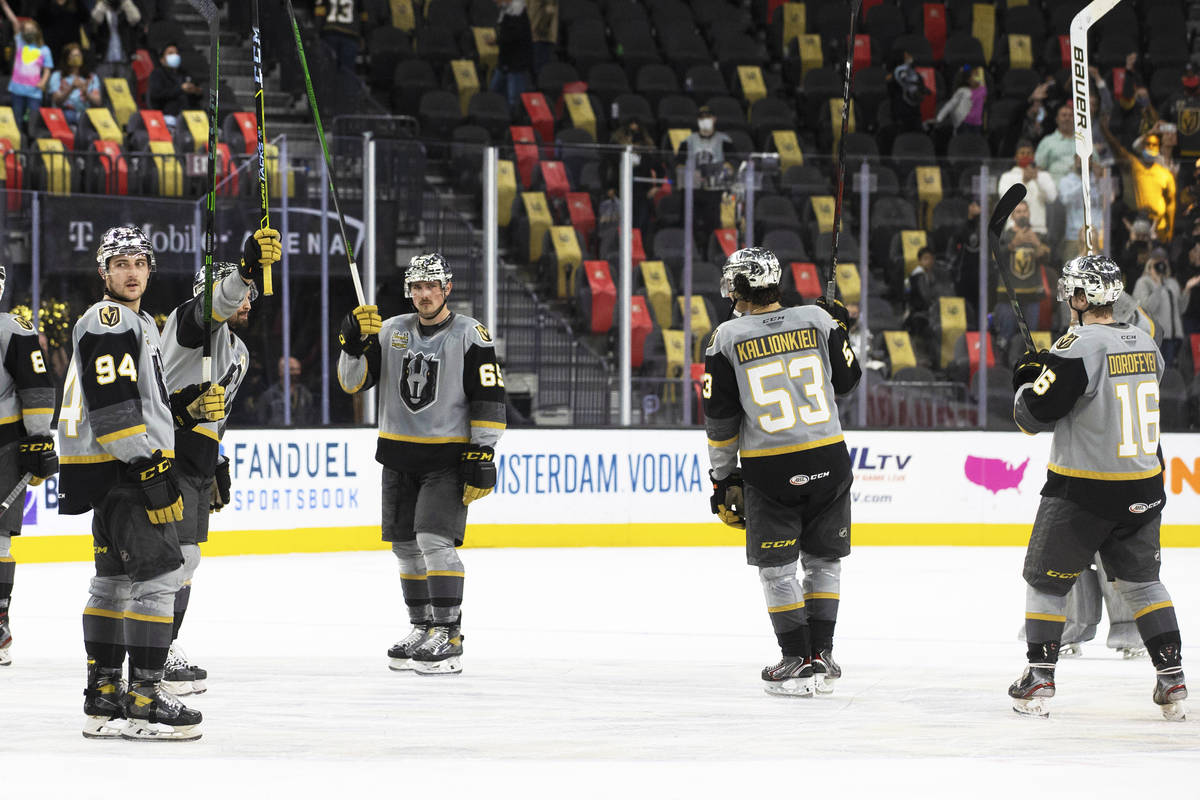 Henderson Silver Knights players salute the crowd after beating the Bakersfield Condors 6-3 during game 2 of the Pacific Division AHL hockey finals against on Thursday, May 27, 2021, at T-Mobile Arena, in Las Vegas. (Benjamin Hager/Las Vegas Review-Journal) @benjaminhphoto

The Silver Knights ended their inaugural regular season the same way their parent club did: With a division title.

Their postseason ended in similar fashion as well.

The Silver Knights lost 3-2 to the Bakersfield Condors on Saturday in front of a team-record announced crowd of 7,420 at T-Mobile Arena to fall in their best-of-three Pacific Division final 2-1.

“We’re certainly disappointed that we lost tonight but we’re not disappointed in how we played,” coach Manny Viveiros said. “I thought that tonight was one of our best games all season long here. Give Bakersfield credit, they came in and played a smart game tonight.”

Forward Tyler Benson scored the game-winning goal for Bakersfield with 11:09 remaining in the third period. The Silver Knights took a 1-0 lead 3:37 into the second period with a goal from left wing Dylan Sikura, but the Condors responded quickly. They scored twice 2:38 apart later in the frame to take a 2-1 lead into the third period.

”It was a long time coming,” Korczak said. “I had a couple chances before. All the guys were kind of giving it to me because I was kind of snakebitten there for a bit. Super nice to get the first one, especially at home here at Vegas.”

The Silver Knights couldn’t find an equalizer afterward. They had 35 shots on goal, but goaltender Stuart Skinner, who was pulled after the first period of Game 2, kept the Condors in front.

The Silver Knights finished the year 25-13-1 in the regular season and 3-2 in the playoffs.

“Tough to swallow right now but I think we can be proud of ourselves,” center Jonas Rondbjerg said. “We had a really good first year. I think we played a really good game today but it didn’t bounce our way. That’s the way hockey goes.”