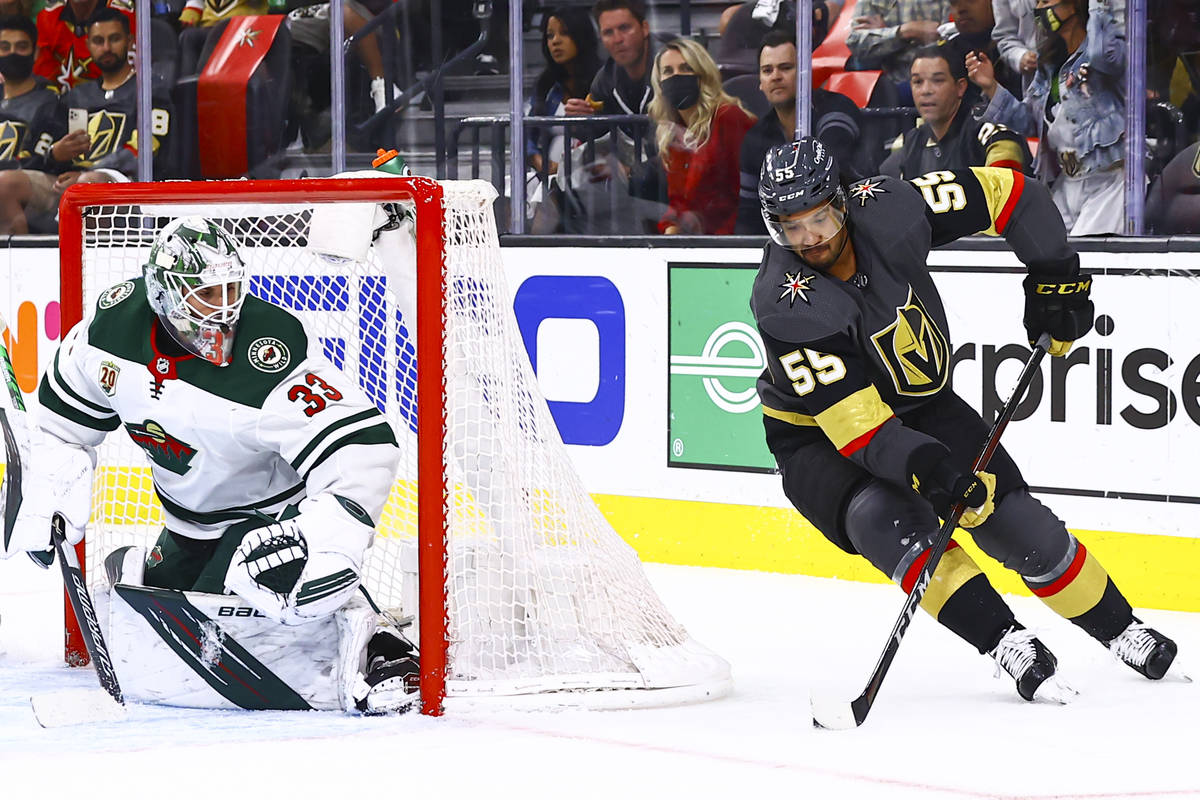 Golden Knights' Keegan Kolesar (55) skates with the puck as Minnesota Wild goaltender Cam Talbot (33) defends during the second period of Game 5 of a first-round NHL hockey playoff series at T-Mobile Arena in Las Vegas on Monday, May 24, 2021. (Chase Stevens/rjmagazine) @csstevensphoto 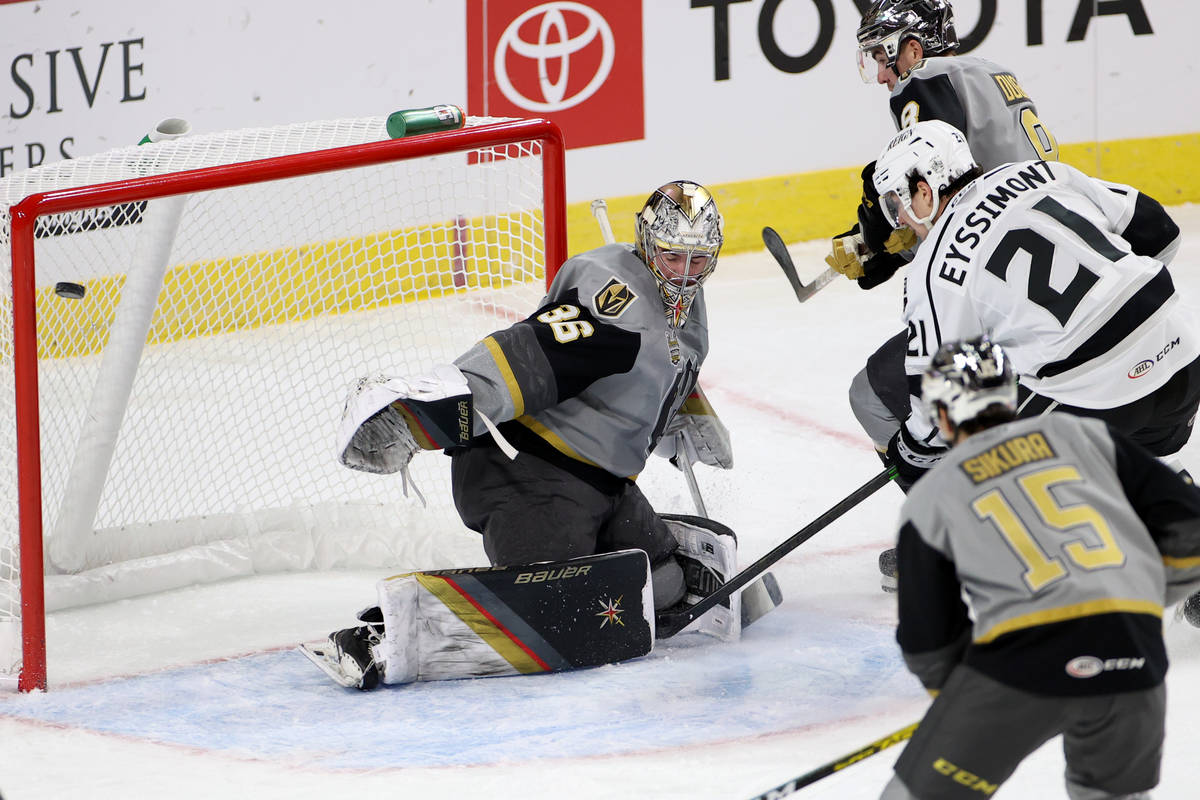 They’ve scored the first goal two of five times and had a lead for only 52 seconds after doing so in Monday’s 4-2 Game 5 loss at T-Mobile Arena. But it hasn’t cost them because they’ve been lights out in second periods.

The Knights have outscored the Wild 8-1 in the middle period largely because of a tenacious forecheck that has allowed them to keep possession in the offensive zone. That was certainly the case in Monday’s Game 5 when they outshot Minnesota 22-1 in the second period.

It was the first time a team outshot its opponent 22-1 in any period since the Toronto Maple Leafs did so against the Los Angeles Kings in the 1993 playoffs.

“It is such a long change that if you can pin a team in their own end, not throw the puck away and then change while you’ve got possession in the offensive zone, that usually allows you to catch the other team tired,” Knights coach Pete DeBoer said. “It’s something that we’ve worked at all year, and I think we’re pretty good at. We did a good job last night of it. Just didn’t result in as many goals as we thought it could’ve based on how we played.”

Second periods ironically were the Knights’ worst during the regular season, though their plus-10 rating was tied for eighth-best in the NHL. They were plus-23 in the first and plus-26 in the third.

Second periods have been a season-long struggle for Minnesota. The Wild were plus-20 in the first and plus-13 in the third. That has carried over into this series, as they’re tied with the Knights 6-6 combining the two periods.

Minnesota was minus-15 in the regular season in second periods and still hasn’t solved those woes in the playoffs. It nearly cost the Wild on Monday because of the Knights’ incredible push, but they staved off elimination and trail the series 3-2 entering Game 6 on Wednesday in St. Paul, Minnesota.

“Their second periods are fabulous,” Minnesota coach Dean Evason said. “They stretch the zone. They blow the zones. They make it very difficult for you to change.”

The Silver Knights’ schedule for the Pacific Division final is set.

Their best-of-three series against the Bakersfield Condors will start at 7 p.m. Wednesday at T-Mobile Arena, where all the games will be played.

Game 2 will be at 7 p.m. Thursday or Friday depending on whether the Knights host a Game 7 against the Wild on Friday. Game 3, if necessary, will be Saturday at a time to be determined.

The Silver Knights were 3-6-1 against the Condors in the regular season.

“Obviously, they beat us a little bit,” said goaltender Logan Thompson, named to the American Hockey League’s all-rookie team Tuesday. “You look at the circumstances, we’ve been missing a lot of our key pieces. We’ll be ready to go. This is a team we really do want. It’s going to feel good hopefully to get two wins against these guys.”

Iowa Wild defenseman Calen Addison, who made his NHL playoff debut Monday against the Knights, was also on the AHL’s all-rookie team.

The Golden Knights will host a watch party for Game 6 starting at 5 p.m. at Red Rock Resort. The party is free and open to all ages.