Vegas Golden Knights head coach Pete DeBoer spoke about the team's late surge to seal their victory over the Arizona Coyotes, 4-2, and said in a shortened season, they'll take wins any way they can get them. (Heidi Fang/Las Vegas Review-Journal) 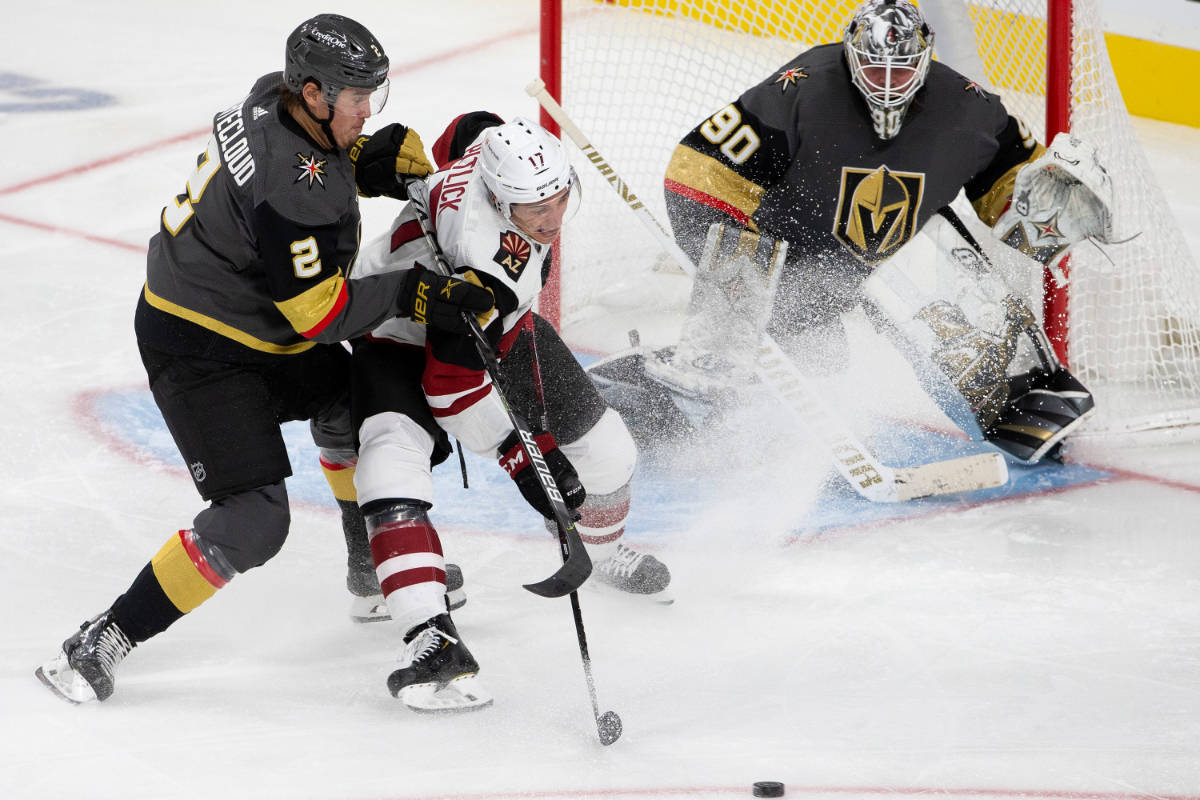 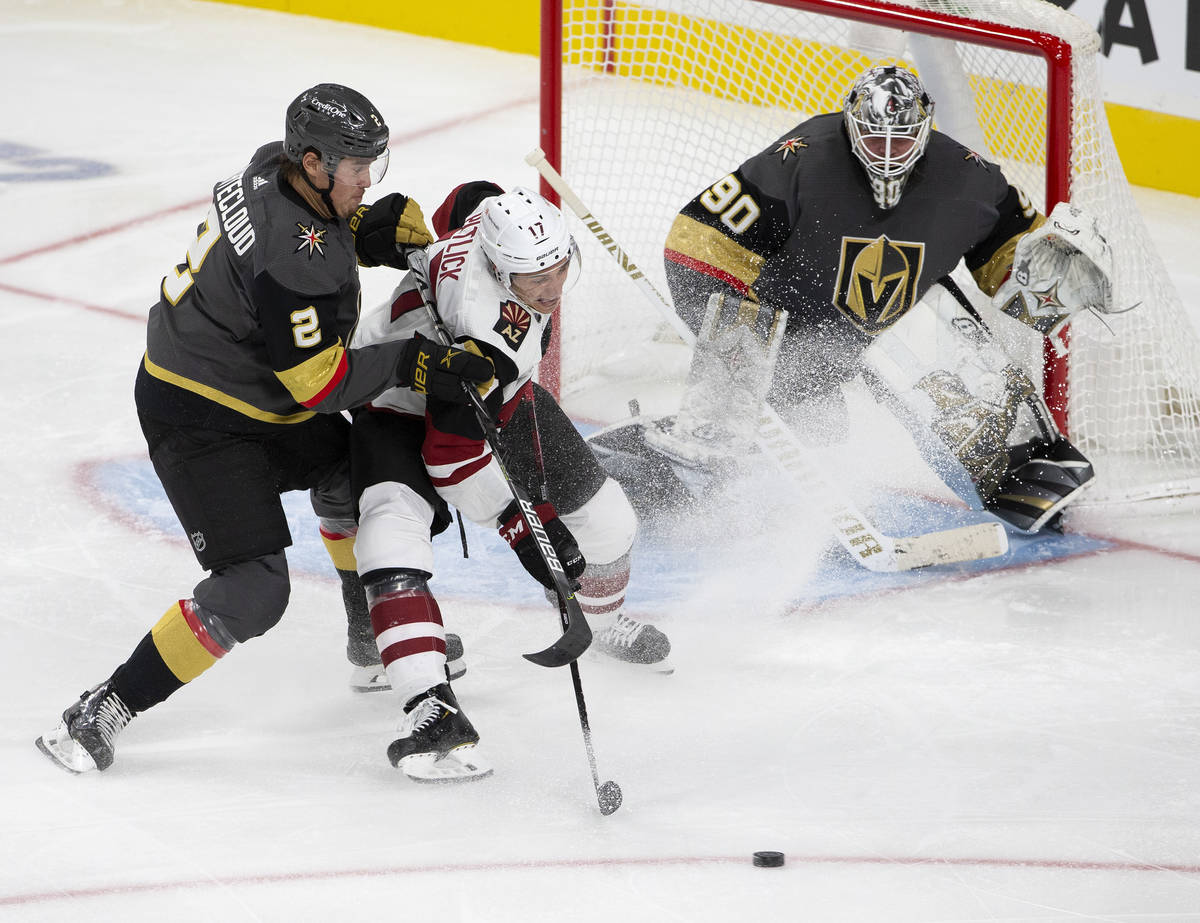 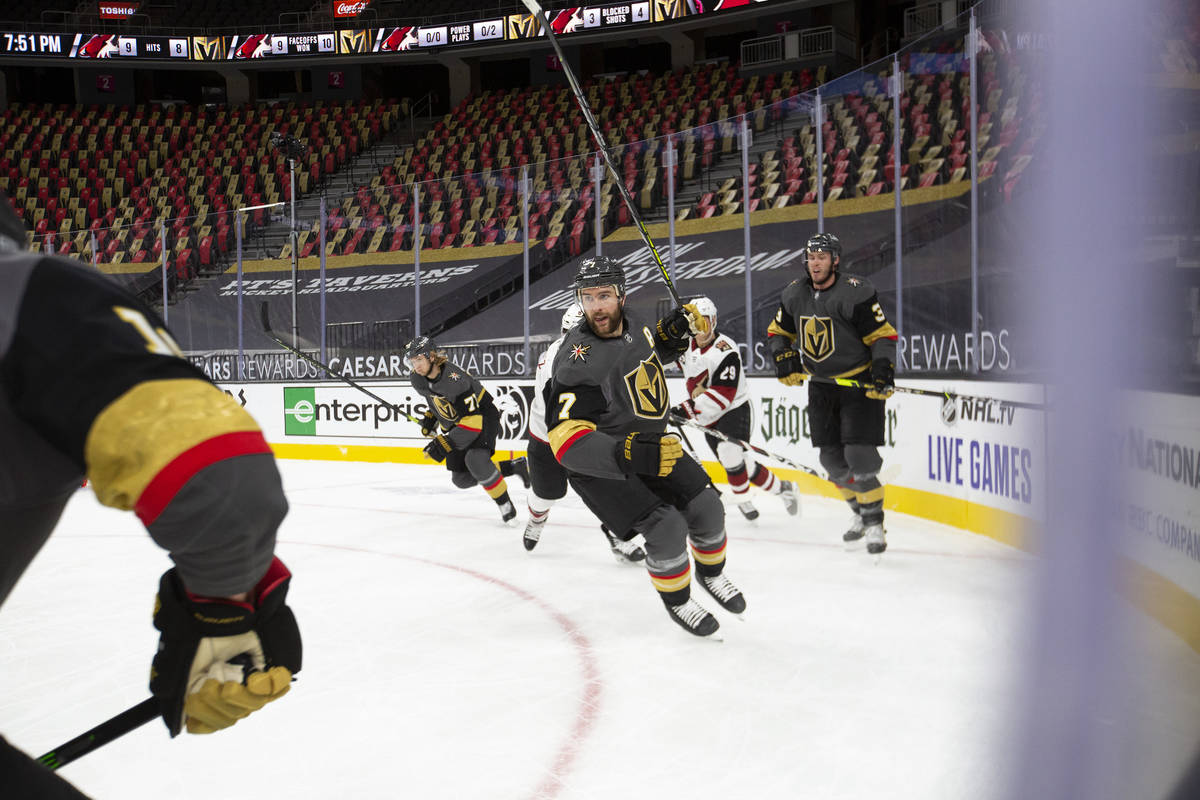 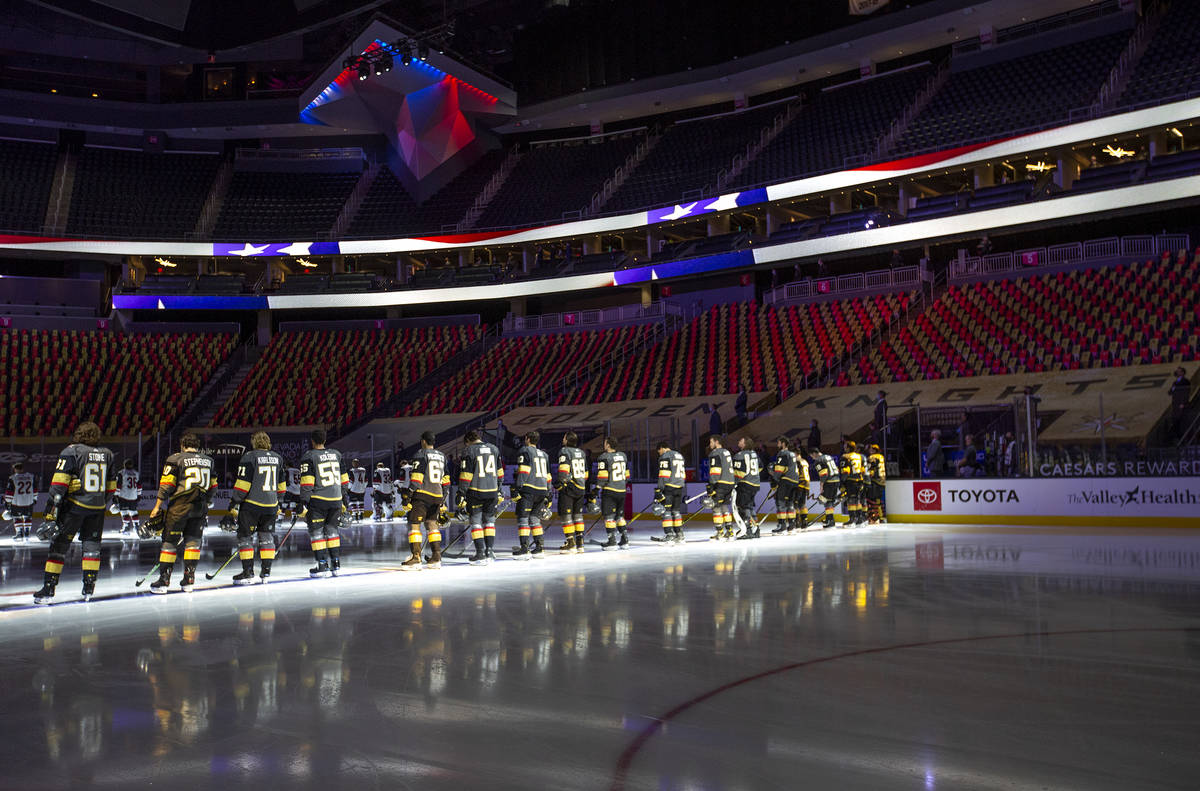 The Golden Knights stand for the national anthem before their NHL hockey game against the Arizona Coyotes on Monday, Jan. 18, 2021, at T-Mobile Arena, in Las Vegas. (Ellen Schmidt/Las Vegas Review-Journal) @ellenschmidttt 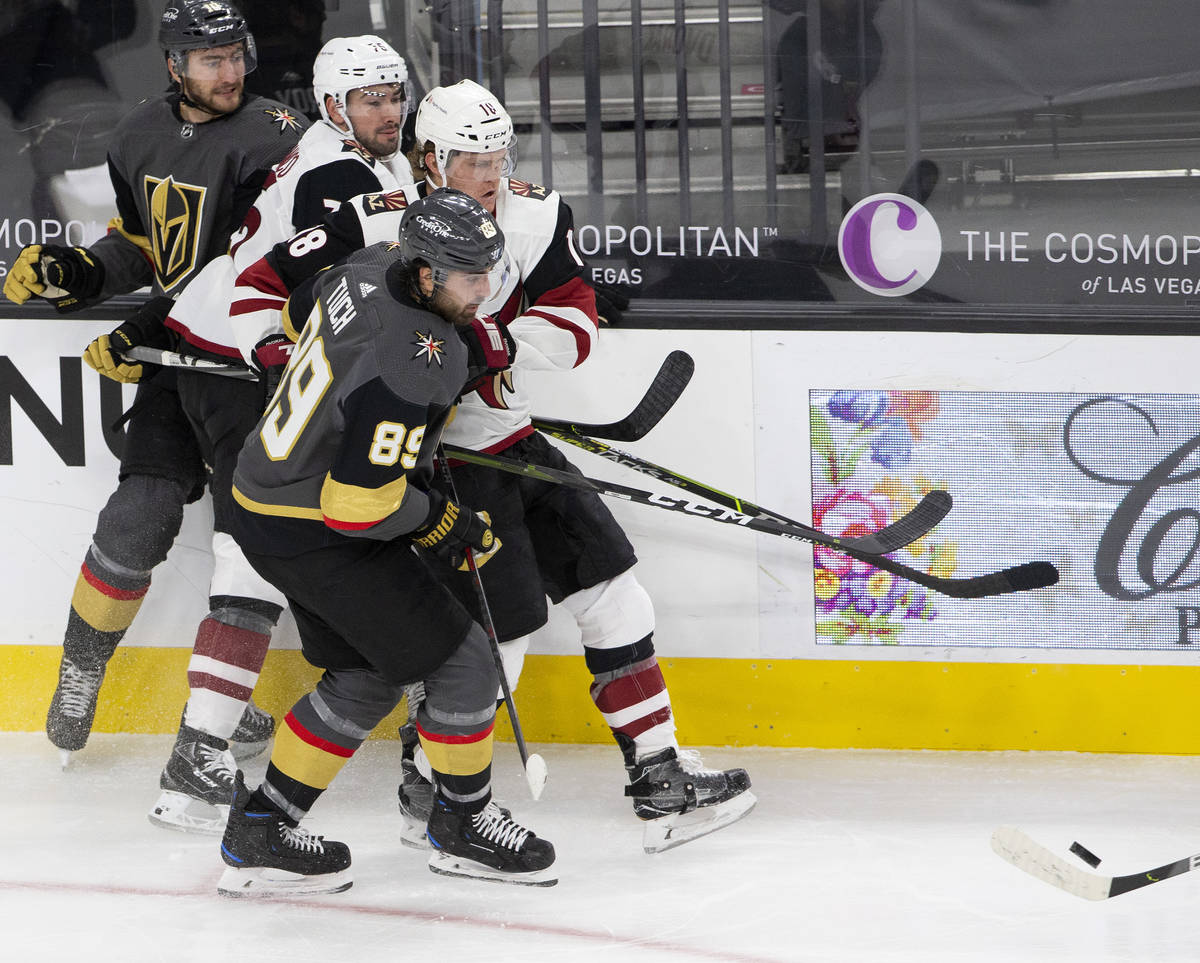 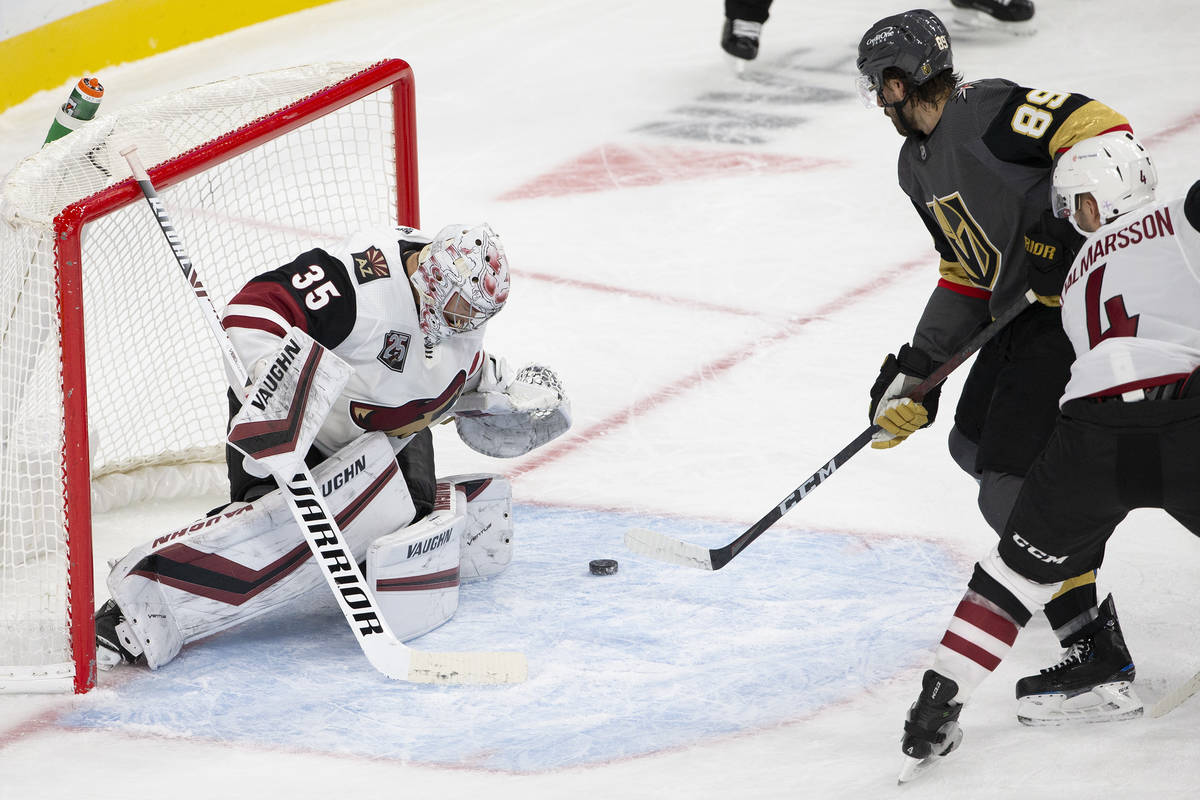 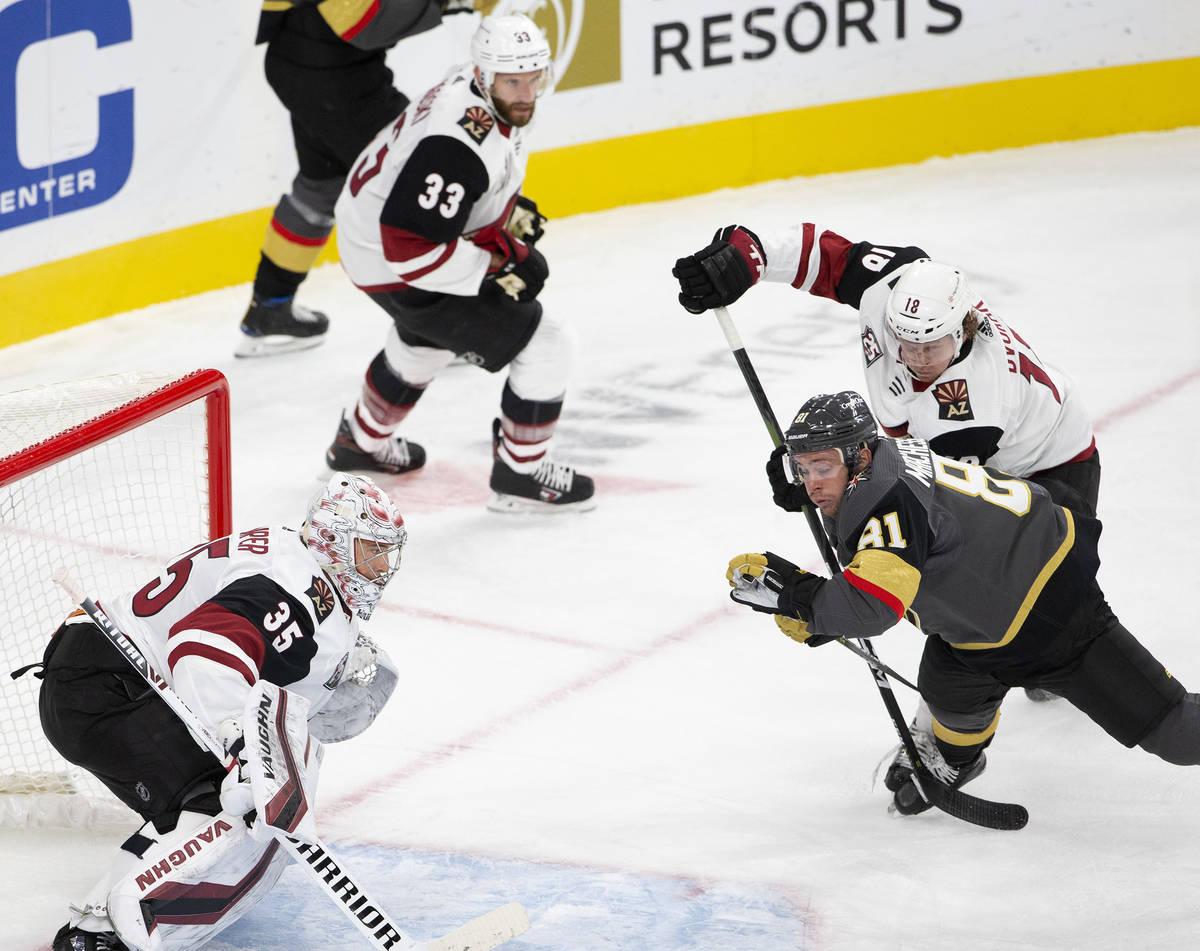 Pete DeBoer had coached four games with the Golden Knights when the team called up Zach Whitecloud.

DeBoer, still conducting a crash-course on his new organization, struggled to come up with the defenseman’s name initially. “The young guy, is it Whitecloud?” he asked when discussing the move in the bowels on Bridgestone Arena in Nashville, Tennessee.

He knows Whitecloud’s name now. As does the rest of his team. And the league.

Whitecloud, in the span of 19 regular-season and 20 postseason games since Feb. 1, has made himself an indispensable part of the Knights. It was clearly evident when the team needed to survive a six-on-four penalty kill in the final 1:13 of its 4-2 win against the Arizona Coyotes on Monday and the second-year defenseman was sent over the boards.

“He deserved to be out there,” DeBoer said. “He’s a guy in that situation who is big and strong and willing to block a shot or eat a puck to help us win a game at that point. When you have those qualities, he’s definitely a guy we’re not afraid to put out on the ice in situations like that late in the game. It’s a great credit to him when you think about where he came from less than a year ago. It’s been an amazing trajectory.”

The successful penalty kill was only part of a strong game for Whitecloud. He also provided the primary assist on the game-winning goal when his shot went off center Chandler Stephenson’s back and in the net 8:12 into the third period.

Through three games, he’s third on the team in average time on ice shorthanded (2:16). The Knights have a 28-21 edge in scoring chances and a 13-7 edge in high-danger chances when he plays at five-on-five.

He’s done everything in his power to earn his keep in the NHL — and make sure his coach never forgets his name again.

“He’s made some huge strides,” Stephenson said. “Really took full advantage of his time here last year. It’s great what a year can do for your confidence and comfort level and just being around guys that have been around for a long time, just taking things away from them and learning. That’s something he does every day.”

The Knights continue to create some of their best scoring chances shorthanded.

The team created two breakaways on the penalty kill Monday but scored on neither. Center William Karlsson hit the post after beating Coyotes goaltender Darcy Kuemper in the second period. Forward Tomas Nosek also got a chance alone on Kuemper after being set up by center Nicolas Roy and was stopped.

“Guys are reacting and moving as a unit without overthinking situations,” DeBoer said. “We’re really aggressive and we’ve got some chemistry with some of the people we’re putting out there together. … We’ve had opportunities to have short-handed goals almost every night.”

The Knights had a five-on-three power play for 1:03 in the first period and came up short. It continued what’s been a years-long struggle for the franchise.

The Knights switched up their third and fourth lines because center Cody Glass was moved to the taxi squad to facilitate defenseman Nic Hague’s season debut.

The new combinations didn’t click. The third line of Roy, left wing Tomas Nosek and right wing Alex Tuch was OK. The Knights trailed in shot attempts 7-3 when the group was on the ice at five-on-five but led in scoring chances 2-1.

The fourth line of left wing William Carrier, center Keegan Kolesar and right wing Ryan Reaves struggled. The Knights didn’t attempt a shot in the trio’s 3:43 at five-on-five and were outchanced 3-0. DeBoer broke up the lines in the third period, switching Carrier and Nosek.