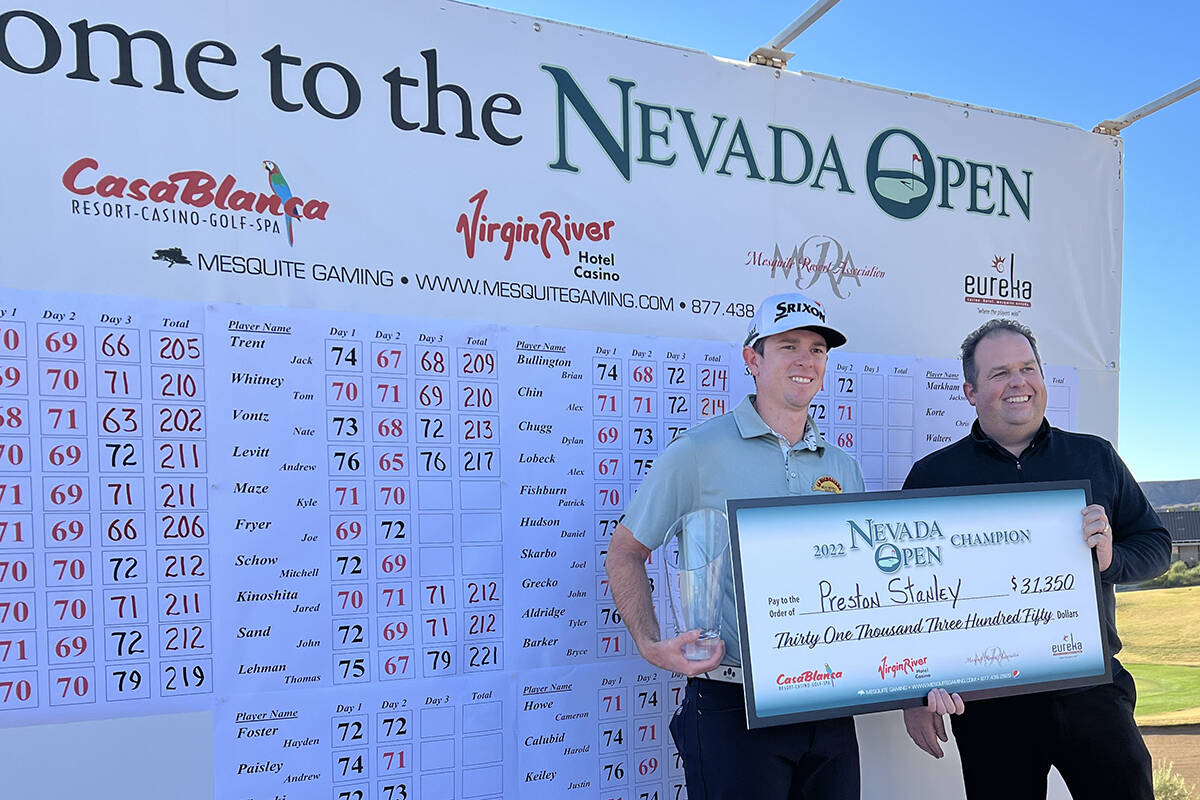 Preston Stanley, left, is presented with the winner's check at the 2022 Nevada Open in Mesquite. He finished at 14 under for a one-shot victory. (SNGA)

Who needs sleep or a practice round?

Preston Stanley arrived in Mesquite at 2 a.m. on the day of the Nevada Open, then calmly went out and shot 14 under over the next three days to win the tournament by one shot over Las Vegas professional Van Thomas.

“This win is definitely one of the top five moments in my career,” said Stanley, who sealed the deal on Thursday at Casablanca Golf Course with a final-round 63, the low round of the tournament.

Stanley was chasing when he made the turn, but he ran off five consecutive birdies to grab the lead, then birdied the finishing hole to secure the victory.

“I just went out and played. This is very satisfying,” said Stanley of his late arrival to the tournament.

He also made a quick exit, needing to be back in Texas the next morning for a 6:30 a.m. shift at his regular job. That was followed by a trip to Georgia on Monday, where he tried to qualify for this week’s PGA Tour event, the RSM Classic. He fell four shots shy in that effort, but nevertheless will continue his pursuit of a professional golf career.

Stanley can only hope he follows the path of Taylor Montgomery, the man who won the Nevada Open each of the past two years. Montgomery earned his PGA Tour card this season and is having phenomenal success, with three top-10 finishes and five top-15 finishes in his first six starts this season.

“This win means that a lot of hard work has paid off,” Stanley said. “I’ve come close a couple times this year. I played well in the Oklahoma Open, so to finish this one off with a win is very nice.”

Stanley had opened the tournament with a 68 at Casablanca on Tuesday, then added a ho-hum 71 at The Palms on Wednesday.

Thomas made his run at the title with a a final-round 66 that featured seven birdies. But Thomas settled for five pars over the final six holes as Stanley overtook him.

Second-round leader Brandon Crick had a final-round 73 and fell back into a tie for fifth.

The inaugural Las Vegas Women’s City Amateur turned out to be no contest at all.

Ali Mulhall fired a final round 2-under 70 at Las Vegas Golf Club to finish at 3-over 147, good for a 15-shot victory in the first edition of the tournament.

The junior at Connections Academy who plays for the state champion Coronado High School golf team had 10 birdies over the course of the two days.

Renee Rocco was second, and Alexandria Wasserburger was another 11 shots back in third.

In the Senior division, Maxine Goodridge won with a par on the first playoff hole over Laura Smith after both finished at 16-over 160. Rusty Beckel was one shot out of the playoff.

In the net category, Clara Heo held off Karen Bernard by a shot.

It’s farewell week on the professional tours. The PGA Tour’s RSM Classic is the final event of the fall season, with players off until things fire up again in Hawaii in January. There will be a few Silly Season events, primarily Tiger Woods’ 20-player Hero Challenge in the Bahamas in December.

The LPGA Tour wraps up its season with the Tour Championship in Naples, Florida, with a tight race for player of the year and the world’s No. 1 ranking on the line.

The Champions Tour finished its season Sunday with Steven Alker claiming the Charles Schwab Cup. Not a bad accomplishment for somebody who was Monday qualifying just to get into tournaments at the start of 2021.

Greg Robertson covers golf for the Review Journal. Reach him at grobertson@reviewjournal.com.