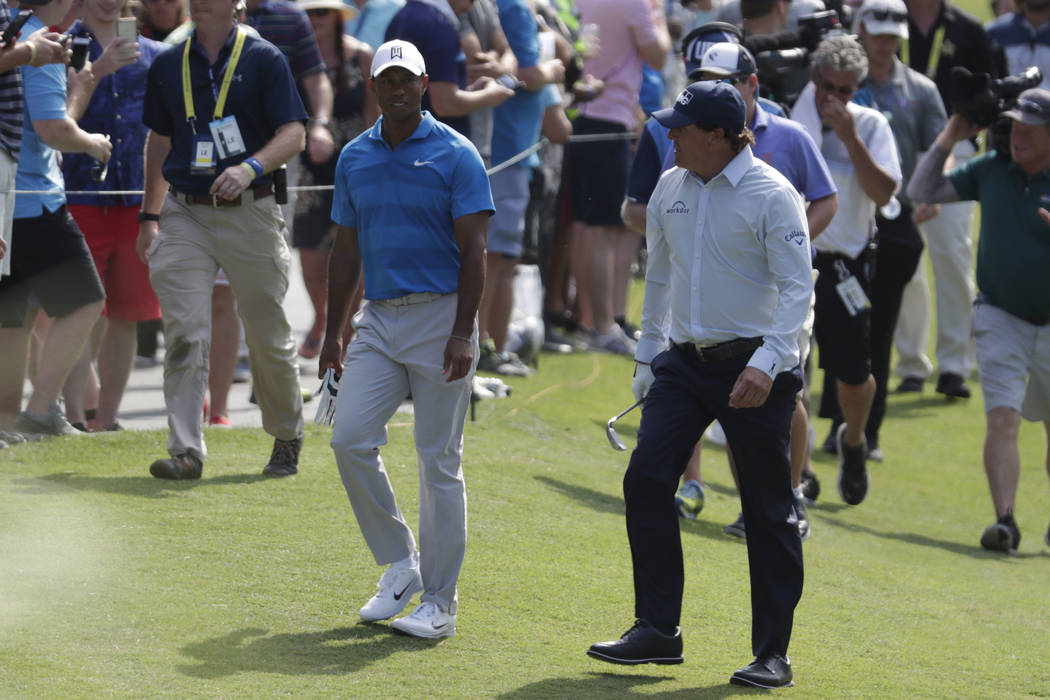 Tiger Woods, left, and Phil Mickelson, right, walks down the 10th fairway during the first round of the Players Championship golf tournament, Thursday, May 10, 2018, in Ponte Vedra Beach, Fla. (AP Photo/Lynne Sladky)

The odds seem in favor of the much anticipated match between Tiger Woods and Phil Mickelson taking place in Las Vegas over Thanksgiving Day weekend.

However, according to a Las Vegas source and a national source, both familiar with the negotiations, nothing is official.

Both also said that media reports about the match, which is expected to be played Nov. 23-24 at Shadow Creek, were a lot of “speculation.”

When the national source was asked whether the Phil vs. Tiger event could become official soon, he said that while it could be considered an opportunistic time to announce it during this week’s PGA Championship, it might also be considered a slight to the major tournament by bringing attention to the made-for-television event.

He classified Tiger vs. Phil match negotiations as “ongoing and nothing is official.”

At the Bridgestone last week, Woods confirmed potential plans for more than one match are being discussed, similar to the Monday Night Golf series he was involved in from 1999 and 2005 at the zenith of his popularity.

“I don’t know, we’ll see,” Woods said. “The plans are for this one and possibly more, but you just never know. When we first did the Showdown at Sherwood, it was basically only a one‑time deal, but it ended up going more than that. So, we’ll see what happens with it this year.”

Mickelson has been more candid than most when assessing the possibility of the match happening.

“We’ll have more (details) shortly,” Mickelson said last week. “As we firm up more and more details, we’ll let everybody know. Right now, we just know that it’s going to be Thanksgiving weekend for sure.”

It also appears there is some negotiating to remain about the purse amount, reportedly set at $10 million, which was the total purse of the Bridgestone tournament. Winner Justin Thomas earned $1.7 million.

“The purse has not been finalized for the Tiger V Phil (sic) match and no agreements have been signed at this stage,” PGA Tour executive vice president and chief of operations Andy Pazder wrote in an email response to Golf Digest.

PGA Tour players, media and fans have been vocal in urging Mickelson and Woods to play for some or all of their own money, but that seems unrealistic on a variety of levels.

Officials from the Gaming Control Board said they had no comment at this time.