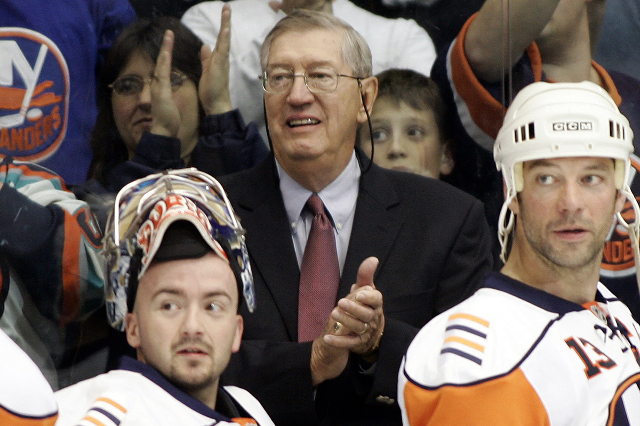 New York Islanders head coach Al Arbour (C) claps as goalie Wade Dubielewicz (L) and Bill Guerin look on after their NHL game victory against the Pittsburgh Penguins at Nassau Coliseum in Uniondale, New York, in this file photo taken November 3, 2007. Arbour, the second-winningest coach in the history of the National Hockey League, has died at the age of 82, the team said on Friday. REUTERS/Shannon Stapleton/Files

Legendary Hall of Fame coach Al Arbour, who guided the New York Islanders to four straight Stanley Cup championships in the 1980s, died Friday. He was 82.

Arbour was being treated for Parkinson’s disease and dementia near his home in Sarasota, Fla.

“Al will always be remembered as one of, if not, the greatest coaches ever to stand behind a bench in the history of the National Hockey League,” Islanders president and general manager Garth Snow said in a statement. “The New York Islanders franchise has four Stanley Cups to its name, thanks in large part to Al’s incredible efforts.

“From his innovative coaching methods, to his humble way of life away from the game, Al is one of the reasons the New York Islanders are a historic franchise. On behalf of the entire organization, we send our deepest condolences to the entire Arbour family.”

Arbour coached 1,500 regular-season games over 19 seasons with the Islanders after he was hired at the start of the 1973-74 season. He retired after the 1994 playoffs, but returned in 2007 at the age of 75 to coach one more game for the team — a 3-2 victory against the Pittsburgh Penguins.

Arbour won 119 career playoff games — an NHL record for a coach with one club — over 15 postseason appearances and hoisted the Stanley Cup each season from 1980 to 1983. He finished his coaching career with 740 victories.

Arbour, inducted into the Hockey Hall of Fame in 1996, also won the Stanley Cup three times as a player, once with the Chicago Blackhawks and twice with the Toronto Maple Leafs.

The Sudbury, Ontario, native was nicknamed “Radar” because he was one of the few players in NHL history to wear glasses on the ice. He spent 19 years in professional hockey as a defenseman, many of those seasons in the minors. He retired in the 1970-71 season having played 626 NHL games.