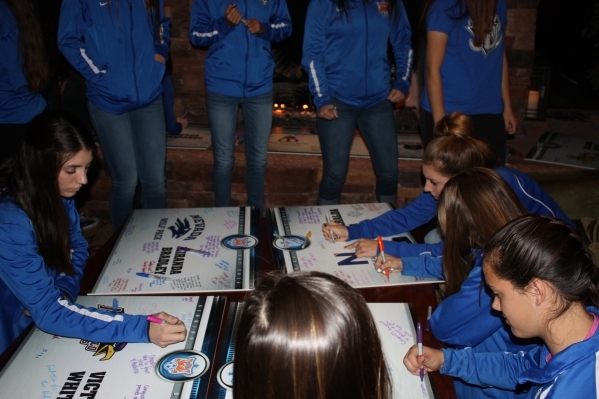 Members of Heat FC, the competitive soccer program of the Southern Nevada Soccer Association, are seen Feb. 3 at the Red Rock Country Club as they autograph posters. It was part of events at the annual college signing ceremony. Far left is Dani Varner, and far right is Shawna Slater, with, top right towards camera, Alea Taube. The Las Vegas girls were recognized that night for signing with various colleges and universities. Olivia Packer/Special 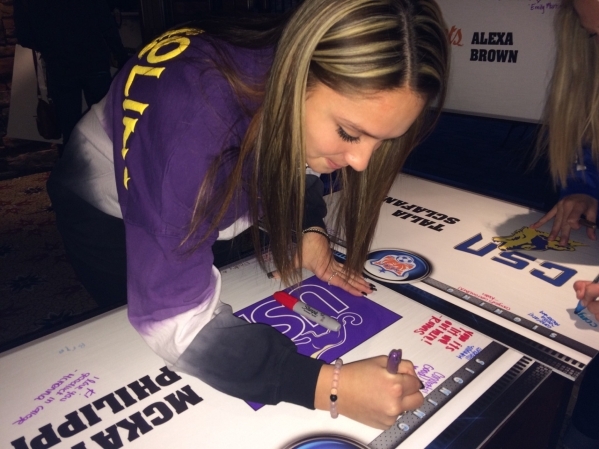 Audrina Krohn, 18, who attends College of Southern Nevada High School, signs her name to a banner Feb. 3 in the lobby of the Red Rock Country Club. She said she was not surprised that so many students got signed to notable colleges because of the great coaches they have. She signed with East Carolina University. Jan Hogan/View

The Heat FC Soccer Club, the competitive soccer program of the Southern Nevada Soccer Association, hosted its annual college signing ceremony Feb. 3 at Red Rock Country Club. Twenty-four student-athletes who will be continuing their soccer careers at the collegiate level were honored.

Being part of the club means taking soccer to the next level.

Key Reid is the son of U.S. Sen. Harry Reid. The soccer program’s graduates come from across the Las Vegas Valley.

Amanda Schmutz, co-director of the club’s U15-U18 Age Divisions, said signing with so many schools reflects the caliber of coaches and staff. She said that when players are young, soccer is about competing and having fun, but she also sees the hunger in them to achieve in the sport. Every player brings something to the table that makes them unique, she said, and colleges look at players individually, as what is right for one school may not be right for another. She has two daughters in the system, ages 8 and 9.

Tom Amick, Elite Clubs National League director, also has children in the system, ages 9 and 12. He said he likes working with young players.

“Usually when I get them, they are just starting, and they don’t know a lot about college soccer,” Amick said. “It’s really cool for me; I see a lot of growth for them, not just on the soccer field but emotionally, socially and them becoming better players … growing as people, not just as athletes.”

He said they made a lot of sacrifices to get to where they are today.

Karli Berry, 18, has signed with Cornell University. As an Ivy League school, it offers no athletic scholarships. She is set to graduate from Bishop Gorman High School. She said she loves the sport for the teamwork and camaraderie.

“It pushes me every single game,” she said. “I love that it’s a team sport; there is something to be learned every practice, every game. Nothing can stop me from growing in the sport, and that’s what I love most about it.”

She said being involved meant a lot of traveling, particularly on the weekends, and to keep up with her schoolwork, she would study and do homework on the road.

In its 10th year, Heat FC has become one of Nevada’s largest competitive soccer clubs. It offers a full range of playing options for youths, from recreational through the highest competitive levels, as well as for adult players.

Courtney Merrill, 17, a student at Faith Lutheran High School, signed with Pepperdine University. She purposely looked for a faith-based school, one that had both a great education program and excellent soccer program. She plans to study biology; her father is a Pepperdine alumnus who studied law.

“It’s a little nerve-wracking when you get into the recruiting process … but once you talk to coaches, it becomes easier and easier, and you become more comfortable with the process,” Merrill said, adding that she began the process as a freshmen and signed on her junior year.

Emily Martin, 18, a student at Bishop Gorman, chose to sign with the University of Texas. She said when other schools learn she is from Las Vegas, they ask if it’s super hot or if she lives on the Strip.

“As we’ve been going on, we are becoming more and more competitive, and I just was with some of my college teammates, who live in Dallas, and they were, like, ‘Oh, who do you play for?’ and I said, ‘Heat FC. You probably haven’t heard of it, living in Dallas’ … but they had,” Martin said. “So, we are definitely getting on the map.”