Mountain View’s football team was waiting all day for a big defensive play.

The Saints finally got one with 2:56 to play when Jacob Duldulao intercepted a pass near the goal line to help seal a 41-27 win over visiting Needles (Calif.) in the Division III state quarterfinals.

“I got burned on the play before, and I was beating myself up for it,” Duldulao said. “But my teammates lifted me up, and I stuck through it. I just stuck to my assignment, and the ball just happened to come to me.”

After Duldulao’s interception, the Saints were able to pick up two first downs and run out the clock.

Mountain View (9-1) was strong offensively all day, but couldn’t shake the Mustangs (5-5).

“We got some things going offensively and we got up by a couple scores, and they wouldn’t die today,” Mountain View coach Mike Valenzuela said.

The Saints looked like they had the momentum after Ian Locke hit Noah Van Kempen with a 36-yard touchdown pass with 46.4 seconds left in the first half to go up 34-17.

But Needles answered immediately when Aidan Shaver connected with Trenton Poe-Evans on a 51-yard TD strike with 10.6 seconds left in the half to cut the lead to 34-24. A Mountain View defensive back went for the interception on the play, and Poe-Evans was able to make an over-the-shoulder grab near the 20 and score easily.

“We score with a minute to go before the half and we’re up two scores, and if we keep the ball in front of us, that game’s over,” Valenzuela said. “Instead, we had a kid try to play a hero and gave them life.”

Mauricio Santos’ second 30-yard field goal of the game cut the lead to 34-27. But Mountain View got a big run from sophomore Bernard Williams, who scored from 19 yards out, running through an arm tackle at the 10, to push the lead to 41-27 with 7:42 to play.

Williams was in for leading rusher Matt Larson, who had tweaked an ankle injury on the previous play.

Larson rushed for 61 yards and two touchdowns on 15 carries. Duldulao had a rushing touchdown and a 96-yard kickoff return for a score for the Saints. Locke was 9-for-15 passing for 169 yards.

Shaver was 6-for-9 for 159 yards, but was picked off twice. Poe-Evans finished with five catches for 152 yards for Needles.

“We’ve just got to work hard like we have been this whole season,” Duldulao said. “This wasn’t an accident, so we’ve just got to keep working, and hopefully we come up with that win.” 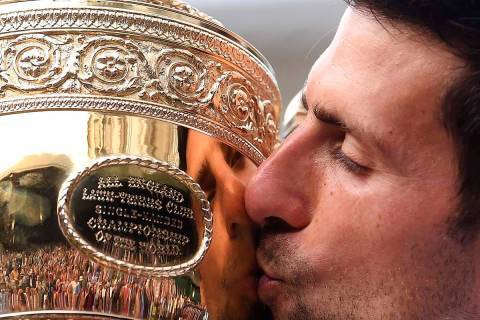