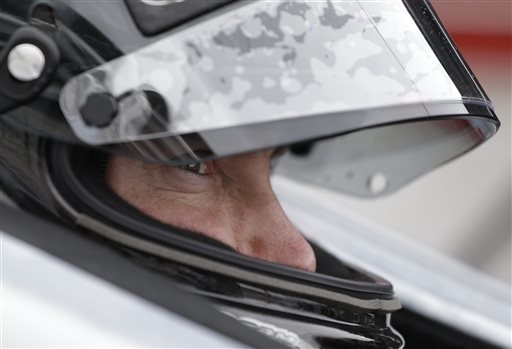 Kurt Busch sits in his car during practice for Indianapolis 500 at the Indianapolis Motor Speedway in Indianapolis. On Memorial Day weekend, NASCAR's bad boy is trying to own the title of baddest man on the track by pulling off racing's version of an IronMan triathlon. In a single day, he'll try and race in the Indianapolis 500 and the Coca-Cola 600, with a race or two against the clock thrown in. (AP Photo/Darron Cummings, File)

Kurt Busch posted a four-lap qualifying speed of 230.782 mph in his final qualification run and will start Sunday’s Indianapolis 500 from the 12th starting position, outside on the fourth row.

The Las Vegas stock car ace is bidding to become the first driver in a decade to race in the Indy 500 and NASCAR’s Coca-Cola 600 on the same day.

Busch posted the third-fastest speed of Sunday’s final qualifications. But because his speed on Saturday was 10th fast, just outside the Fast Nine, he was not allowed to compete for the coveted pole position on Sunday won by Ed Carpenter for the second year in a row.

He did not seem disappointed.

“Looking at that (scoring pylon) and seeing my number up there for the Andretti Autosport team is a dream come true,” said Busch, the fastest rookie qualifier for the 98th running of the big race. “I’m a little out of my element, and the challenge of doing this double and everything going back and forth … I think I can be satisfied with 12th place.

“If I could have stayed yesterday would I have been able to pick up speed? I would have loved to roll the dice and try it, but these competitors in this paddock, it’s truly a matter of respect. These IndyCar guys, the open-wheel world, is just as competitive as ever. There’s going to be 20 of us, I think, in that lead draft come Sunday.”