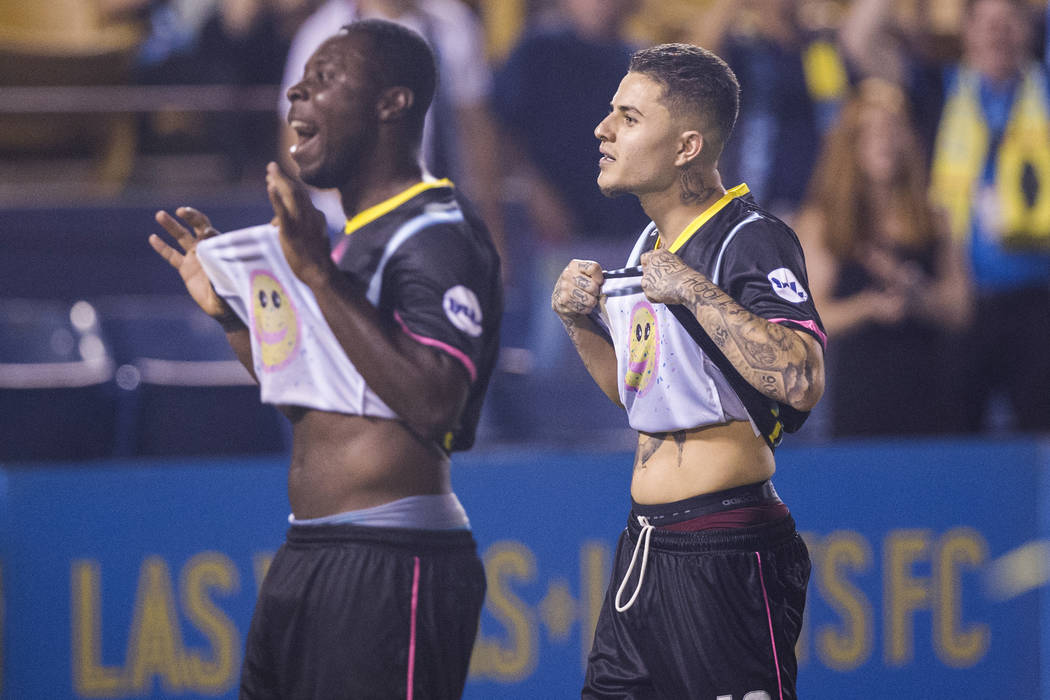 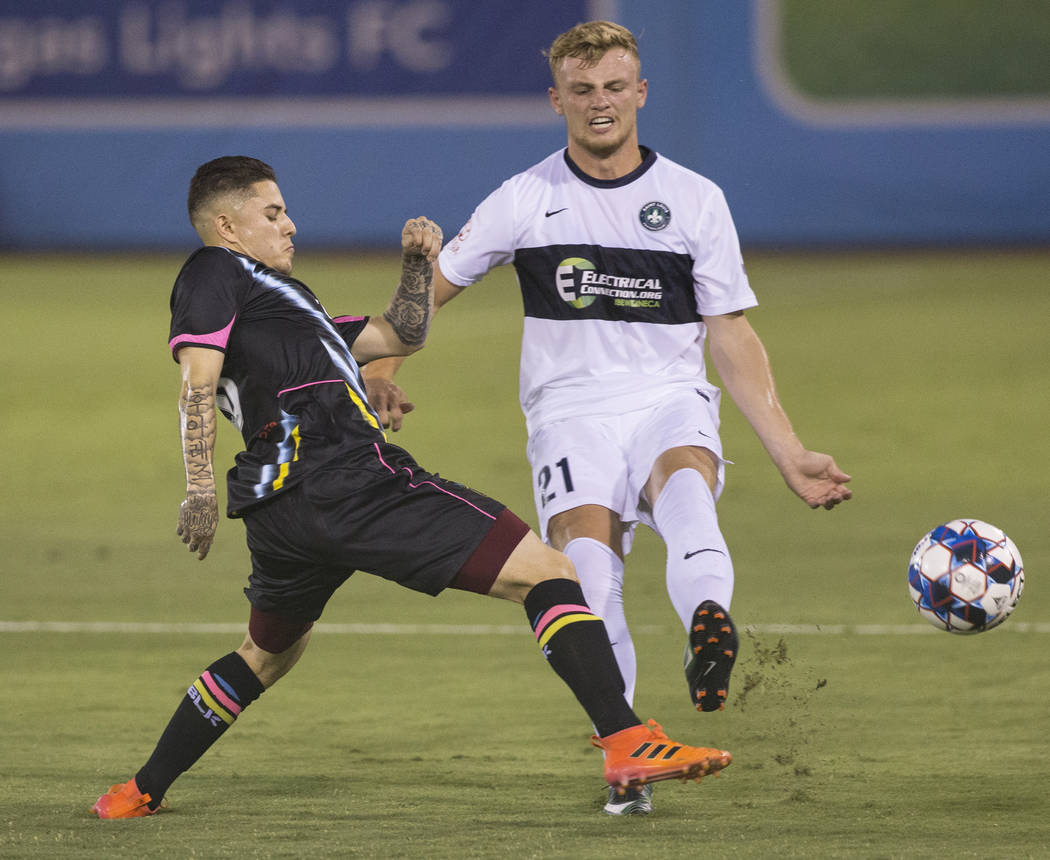 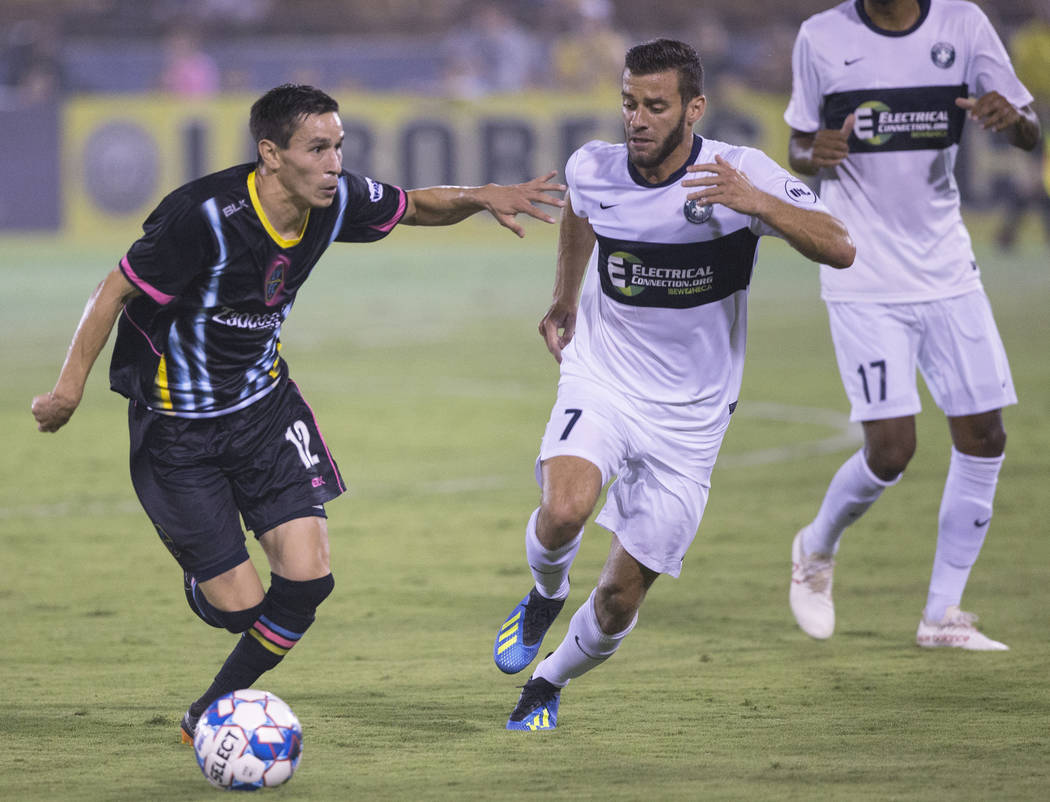 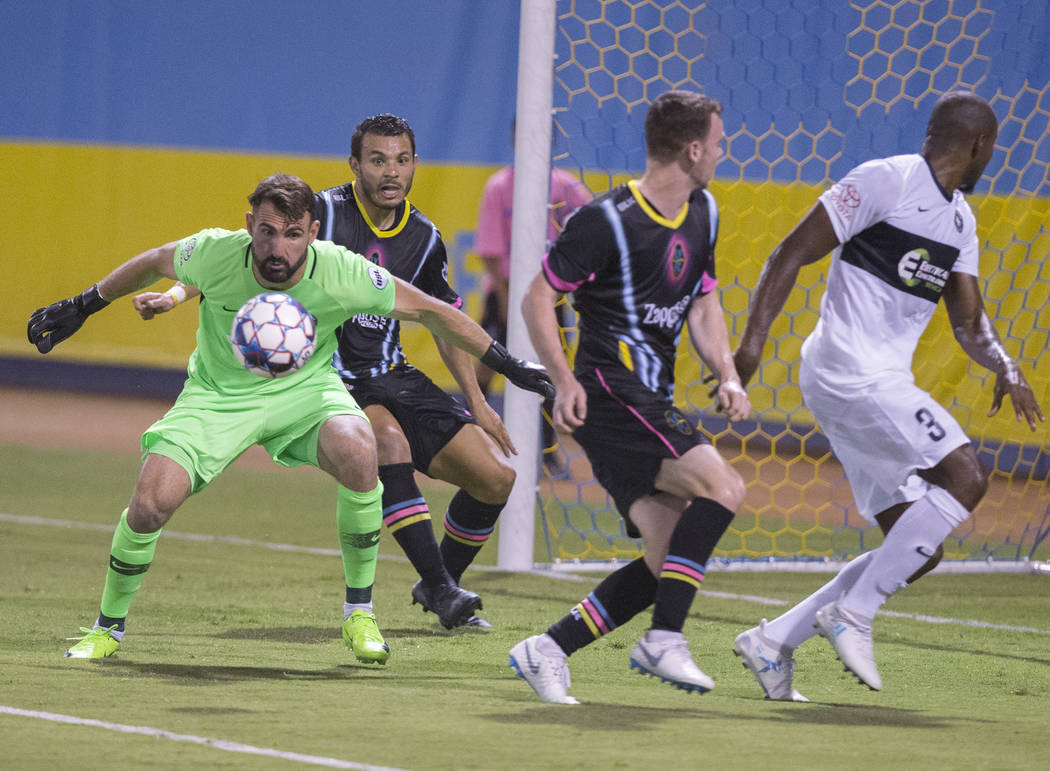 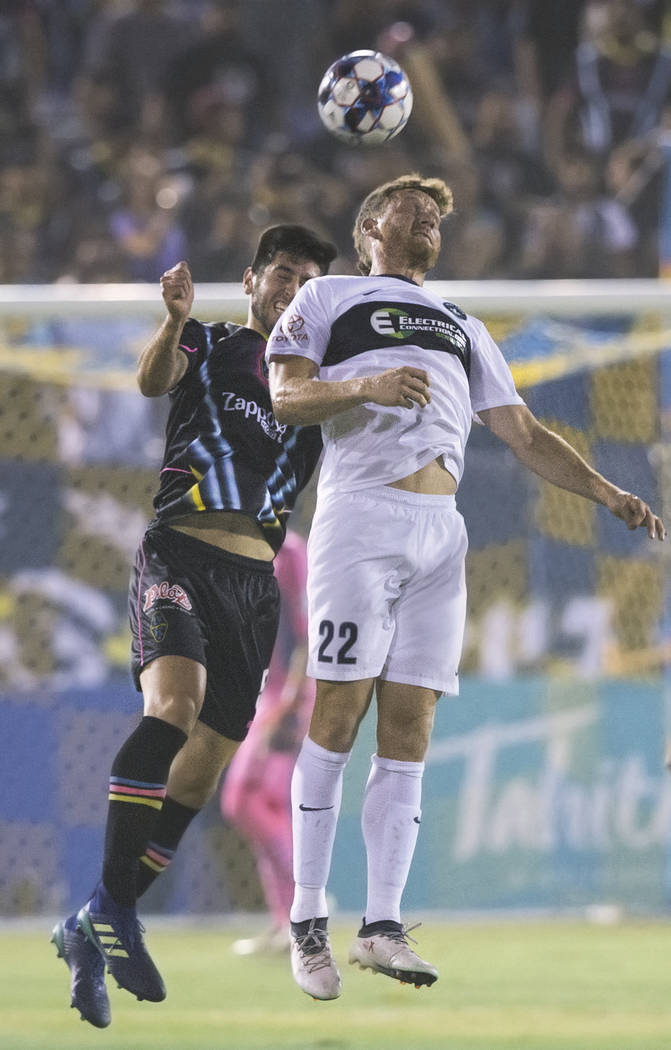 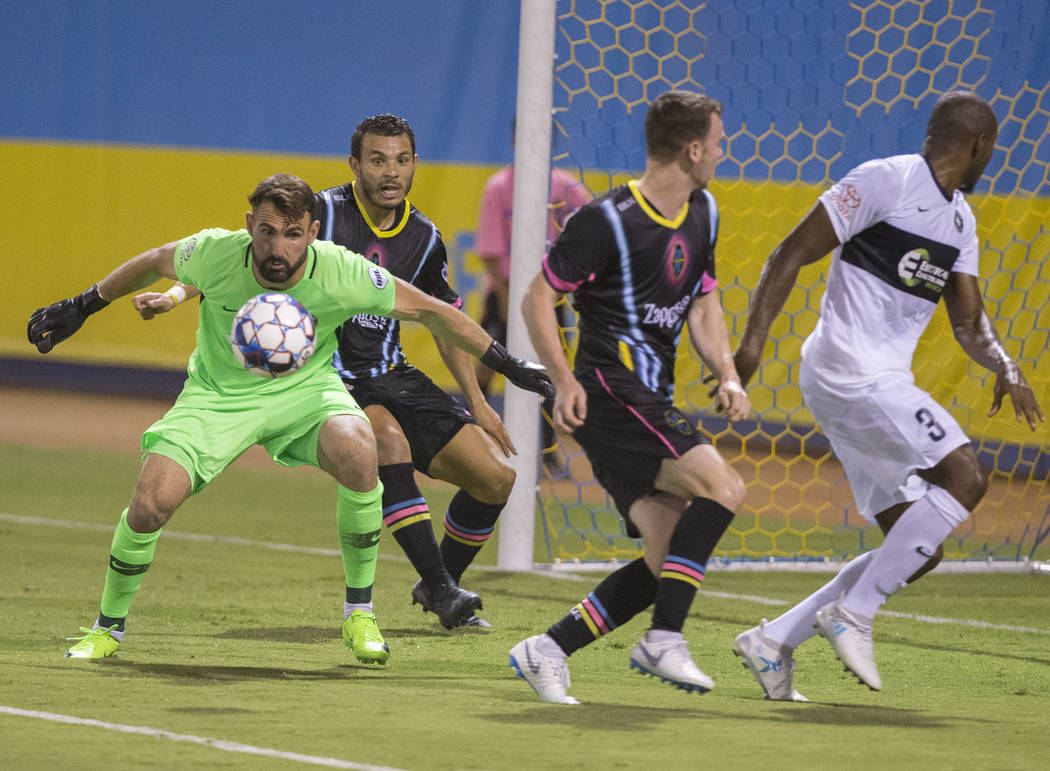 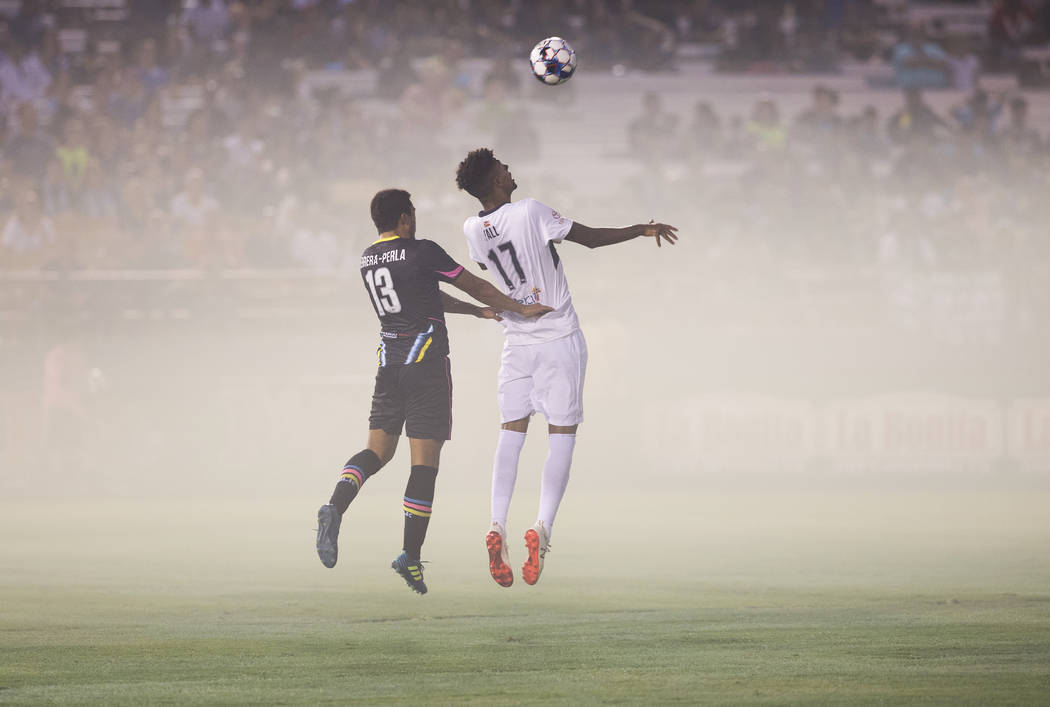 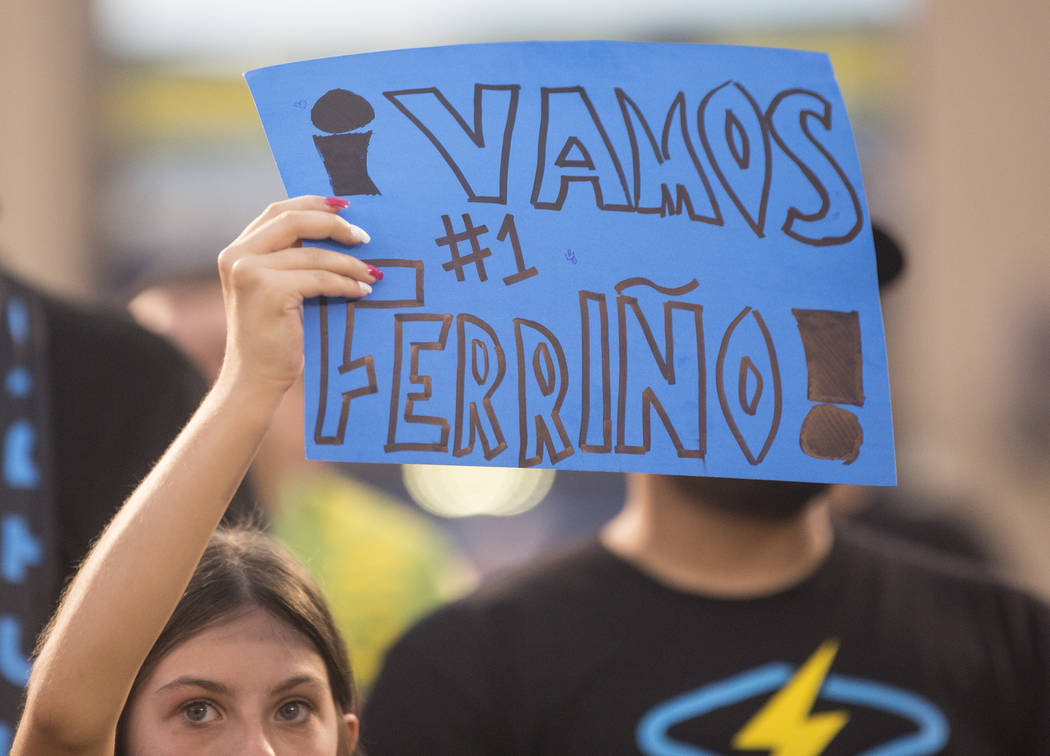 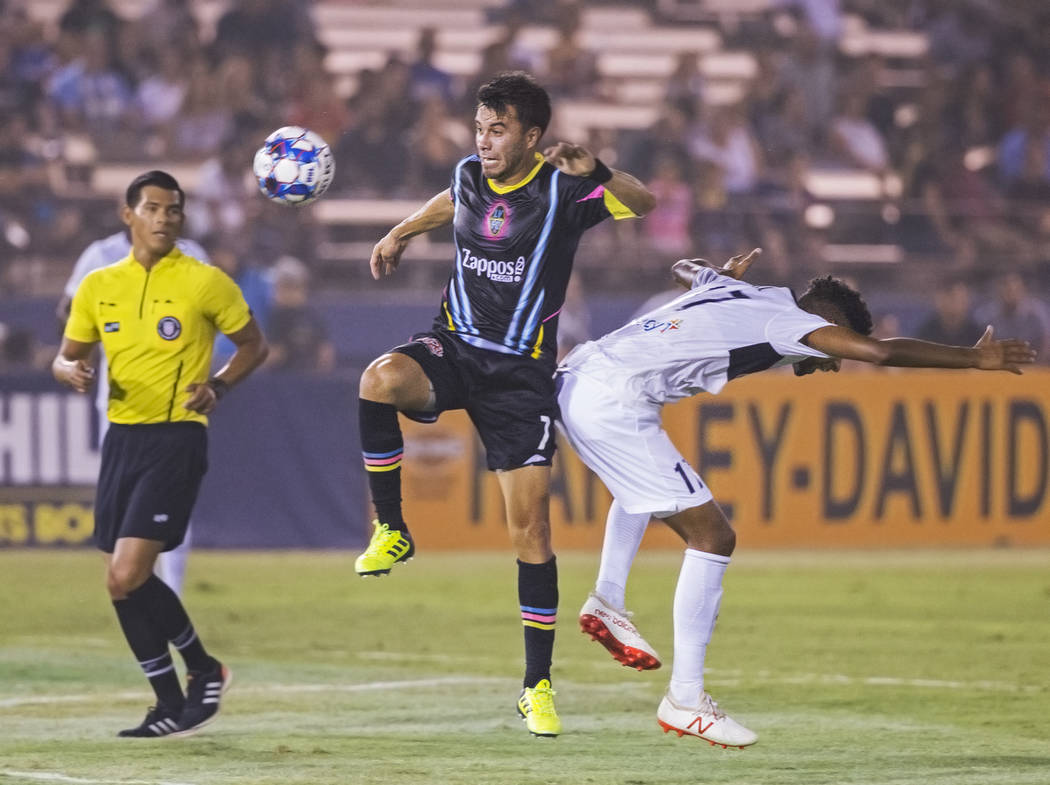 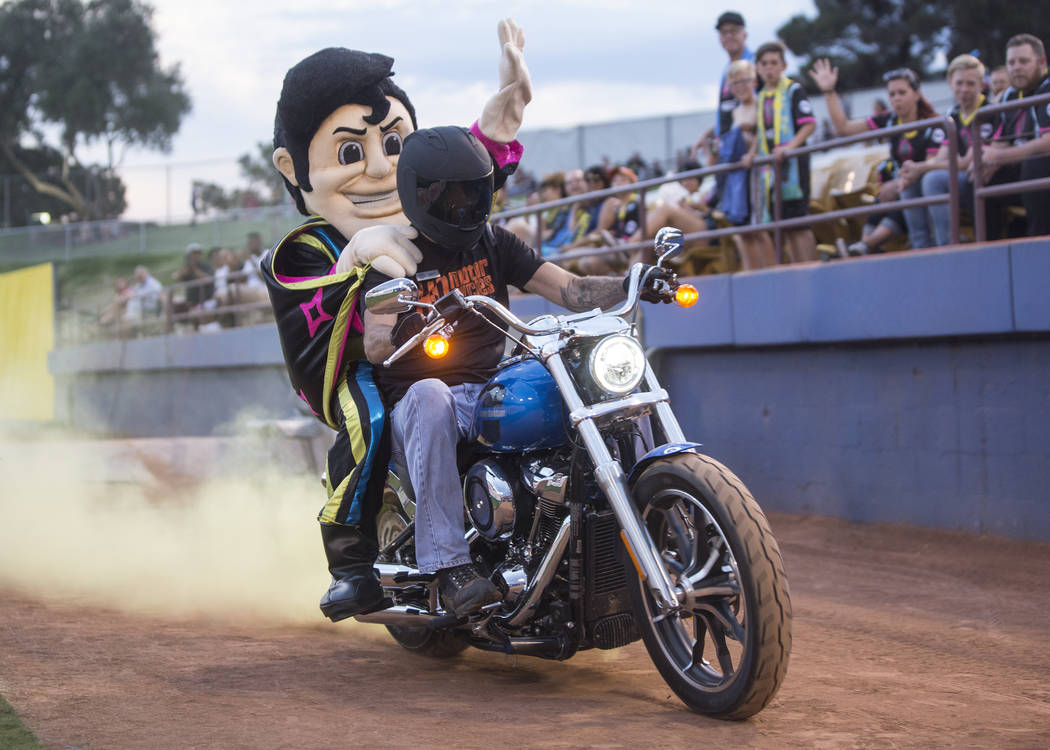 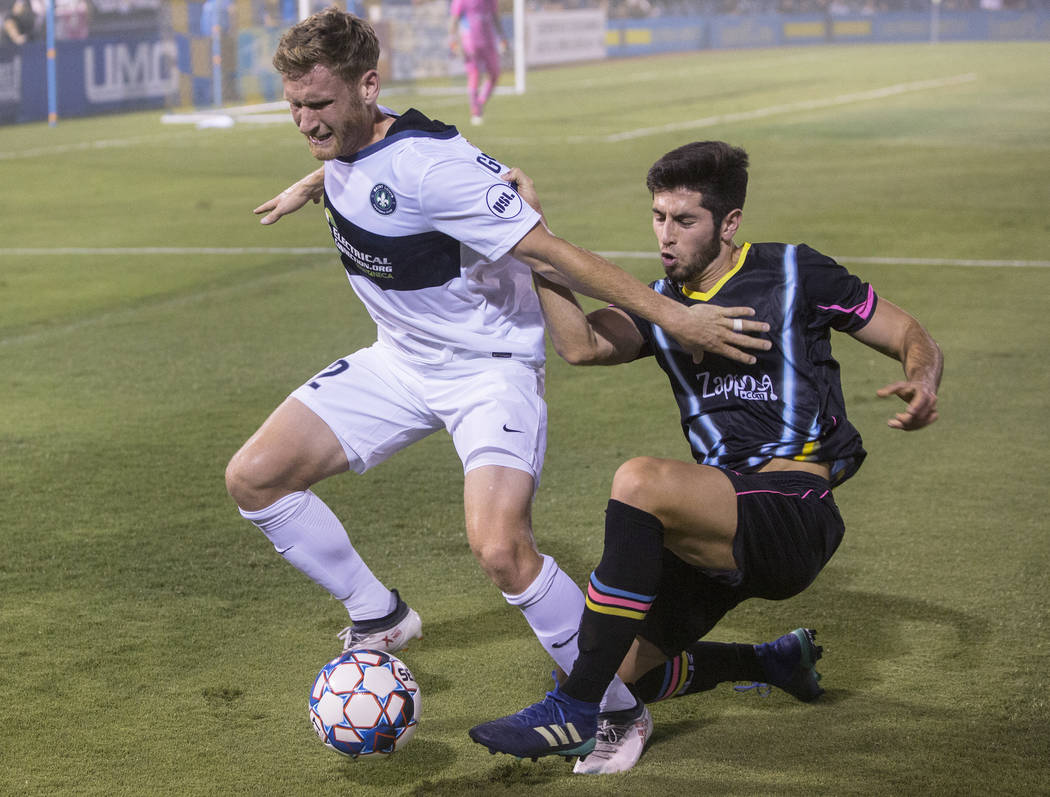 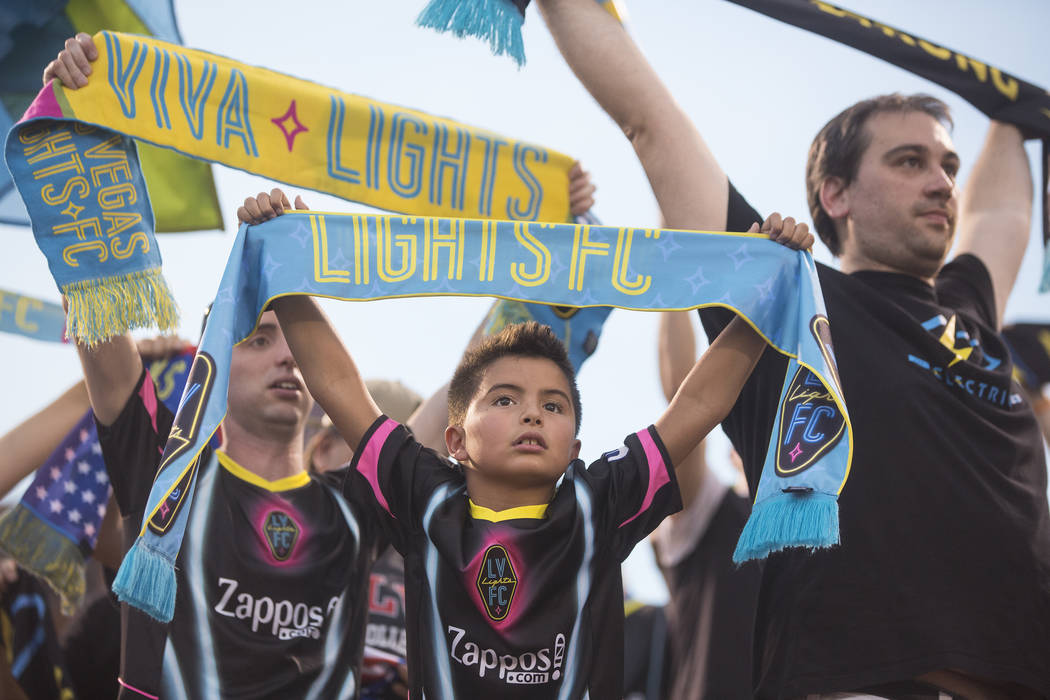 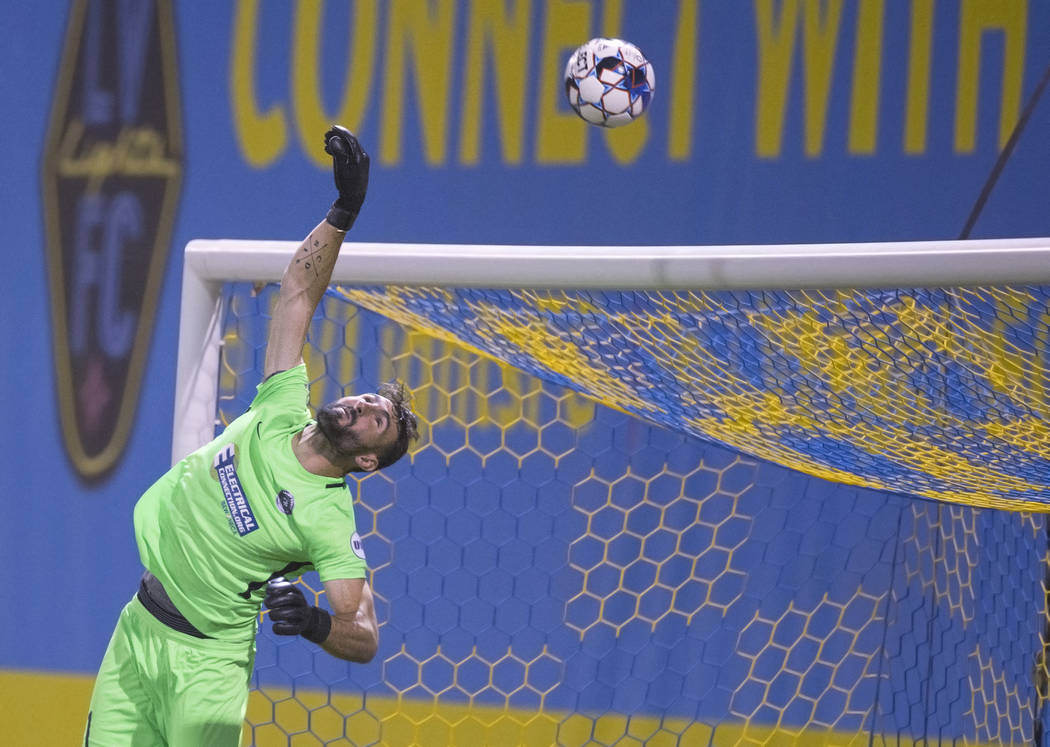 Saint Louis FC goalkeeper Tomás Gómez (1) makes a save in the first half during their game with Las Vegas Lights FC on Saturday, July 7, 2018, at Cashman Field, in Las Vegas. Benjamin Hager Las Vegas Review-Journal @benjaminhphoto 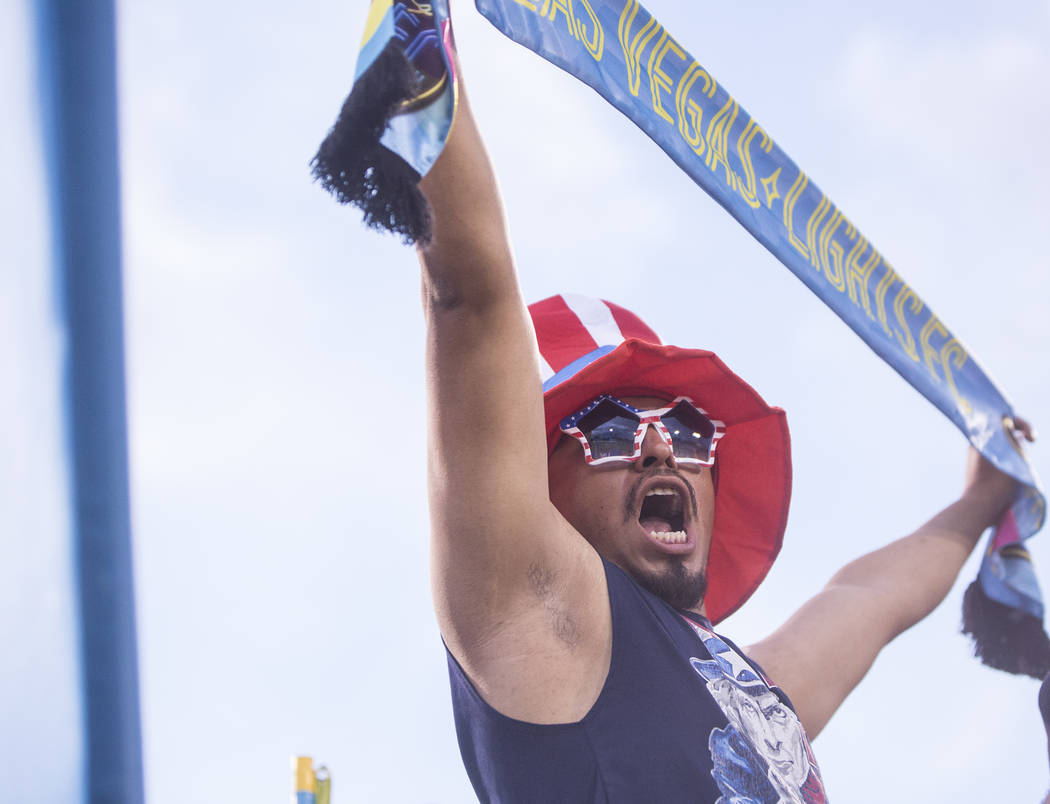 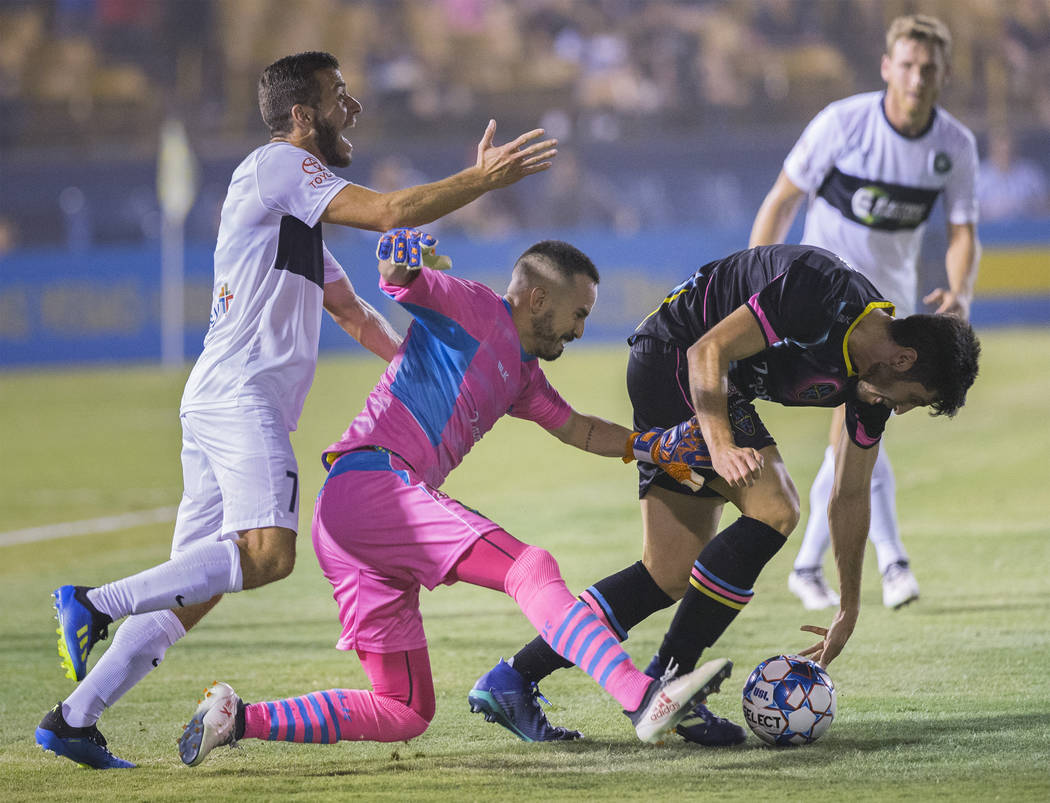 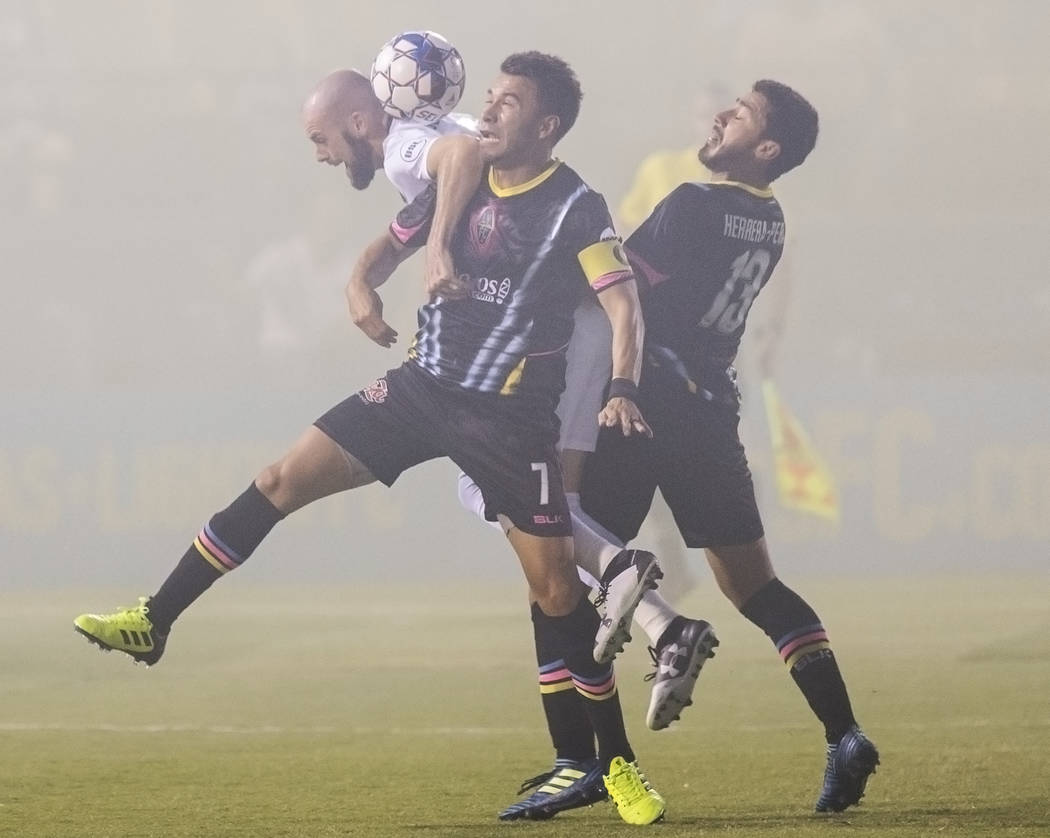 The 24-year-old caught up to a long through ball and struck his second goal in as many matches, providing all the scoring in the Lights’ 1-0 victory in front of an announced 6,651 fans. Mendiola’s hustle in the team’s third straight home win was easy to spot because while the heat slowed others down, he kept running.

The pass that sprung Mendiola in the 49th minute wasn’t even intended for him, as defender Nico Samayoa was trying to find forward Samuel Ochoa. But when Ochoa drifted too far upfield, Samayoa’s long ball from his defensive third skipped into the attacking third and Mendiola caught up to it.

From there the forward slid the ball underneath Saint Louis goalkeeper Tomas Gomez, giving him two goals and an assist in his first five games with the Lights (5-6-5).

His goal was enough for his team to pull away from a Saint Louis (5-6-7) side that seemed to lose energy as the match went on. The visitors took only three shots in a match where the temperature was 101 degrees at kickoff — with only one coming in the second half.

“The heat is something that is very hard to get used to,” Samayoa said. “The heat obviously affects both teams, and you could see at the end of the game that both teams were very tired.”

The temperature-induced fatigue helped the Lights pick up their second shutout of the season, despite injuries and a suspension forcing their hand on the back line. They used a 3-4-3 formation because Samayoa, Juan Herrera-Perla and Marcelo Alatorre were their only healthy defenders, but the trio limited Saint Louis’ chances all night.

Samayoa, making his first start of the season, had a game-high four tackles in addition to his assist. Thanks to his and Mendiola’s efforts the Lights were able to win their only home match in July before embarking on a season-long four-game road trip.

“They will put the Las Vegas Lights where they deserve (in the standings). It’s all about these four games,” coach Isidro Sanchez said. “Unfortunately, our fans won’t enjoy it but we’ll look to win the four.”