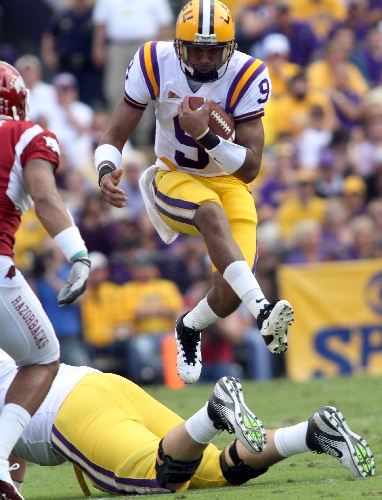 Only a major upset or a dramatic shift by voters can prevent a rematch between Louisiana State and Alabama in the Bowl Championship Series title game.

The Tigers and Crimson Tide hold down the top two spots for the second straight week — and by a wide margin over third-place Oklahoma State. Stanford is fourth and Virginia Tech fifth.

LSU (1.000 BCS average) is a unanimous No. 1 in the coaches’ poll and the Harris poll and is top-ranked in the computer ratings. Alabama (.9551) is an overwhelming No. 2 in the polls and second in the computers.

Oklahoma State (.8712), with one game left against Oklahoma on Saturday, is third in the computer ratings and fifth in the polls.

LSU (12-0) plays Georgia in the Southeastern Conference championship game on Saturday. Win that, and the Tigers earn a spot in the BCS title game Jan. 9 in New Orleans. If the Tigers lose to the Bulldogs, they still have a chance to remain in the BCS top two and play for the national title.

Alabama is done with its season.

While there might not be any games with national championship implications on championship weekend, plenty of BCS bids will be determined.

Michigan State and Wisconsin play in the Big Ten championship game, with the winner going to the Rose Bowl.

Oregon and UCLA meet in the Pac-12 title game Friday night, with a Rose Bowl berth on the line. The Bruins (6-6) would not qualify for a bowl if they lose in Eugene, Ore.

Oklahoma State might be shut out of the national title game, but the Bedlam rivalry game still will determine the Big 12 champion and — at worst — a spot in the Fiesta Bowl.

The Atlantic Coast Conference championship game between Clemson and Virginia Tech will determine which team plays in the Orange Bowl.

Houston can clinch its spot as this year’s BCS buster by beating Southern Mississippi at home in the Conference USA title game. The unbeaten Cougars are sixth in the latest standings.

The Big East has three teams alive for its conference title and BCS berth: Cincinnati, Louisville and West Virginia, though none of the contenders controls the race.

Meanwhile, the voters in The Associated Press college football poll followed suit with the BCS standings.

LSU was the unanimous No. 1 for a third consecutive week, and Alabama received all the second-place votes for a second straight week.