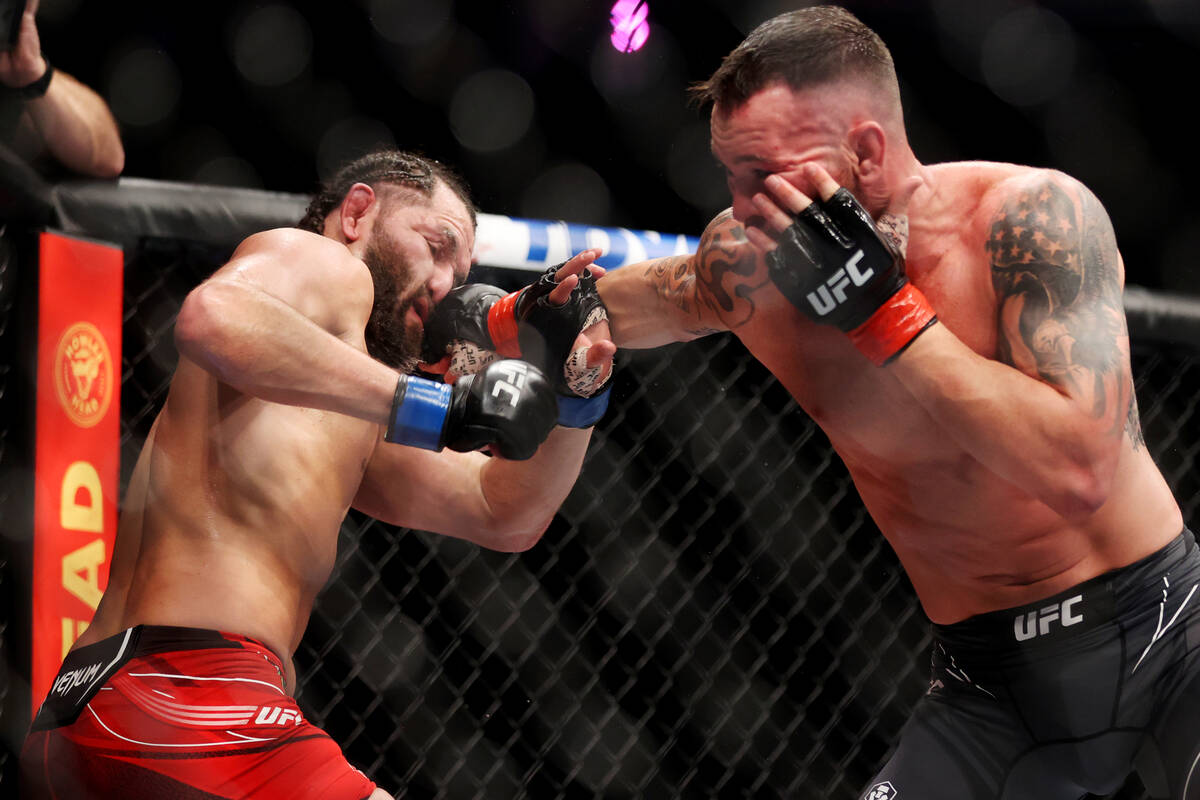 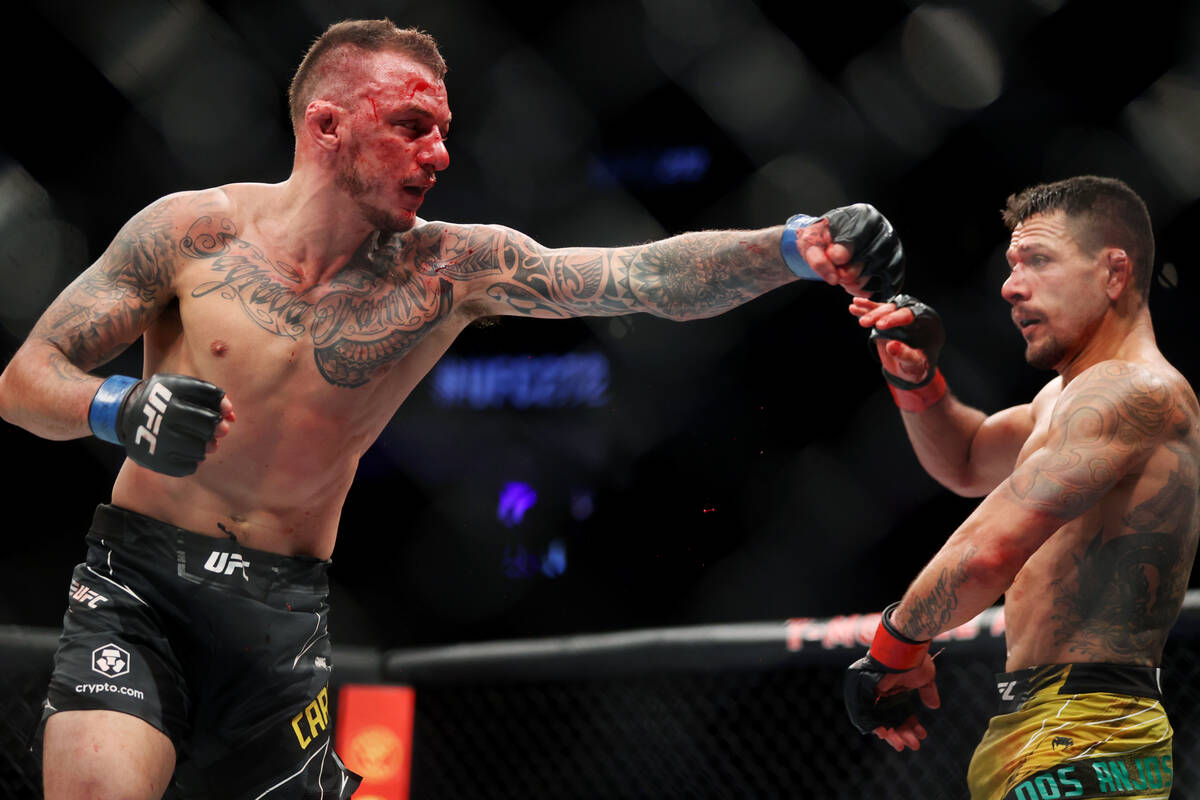 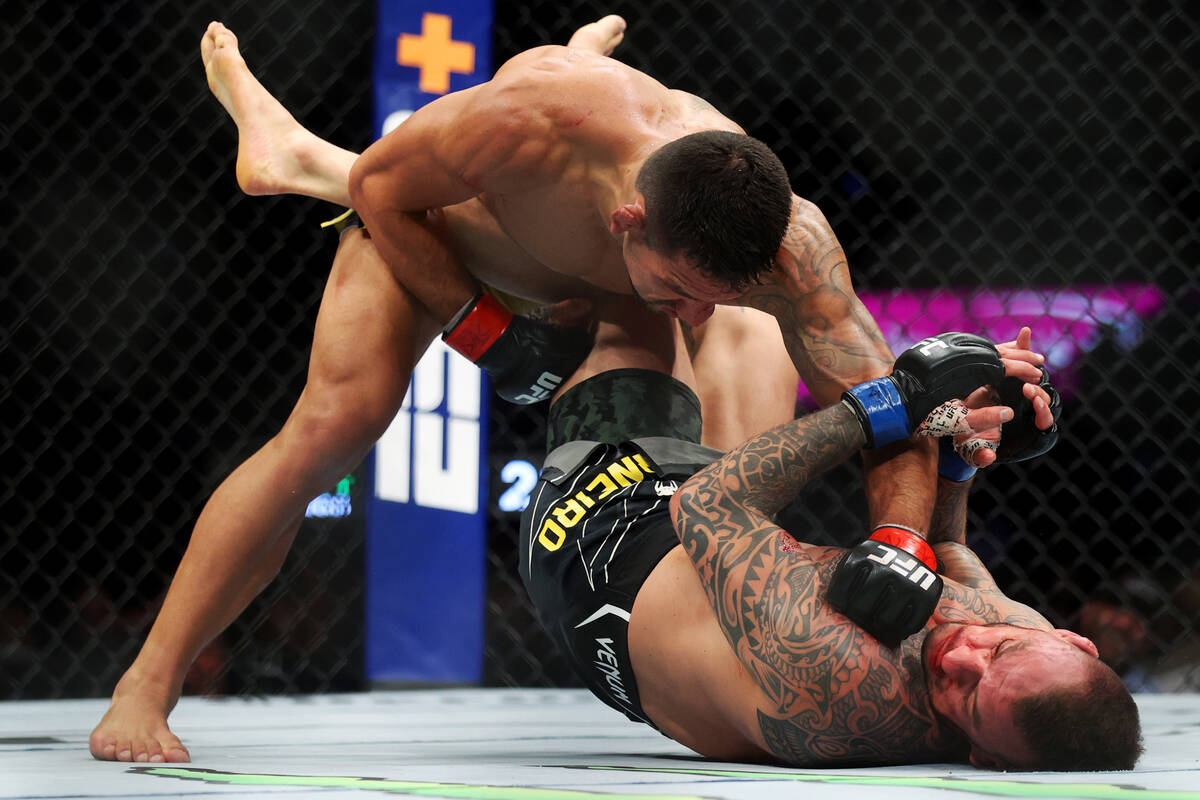 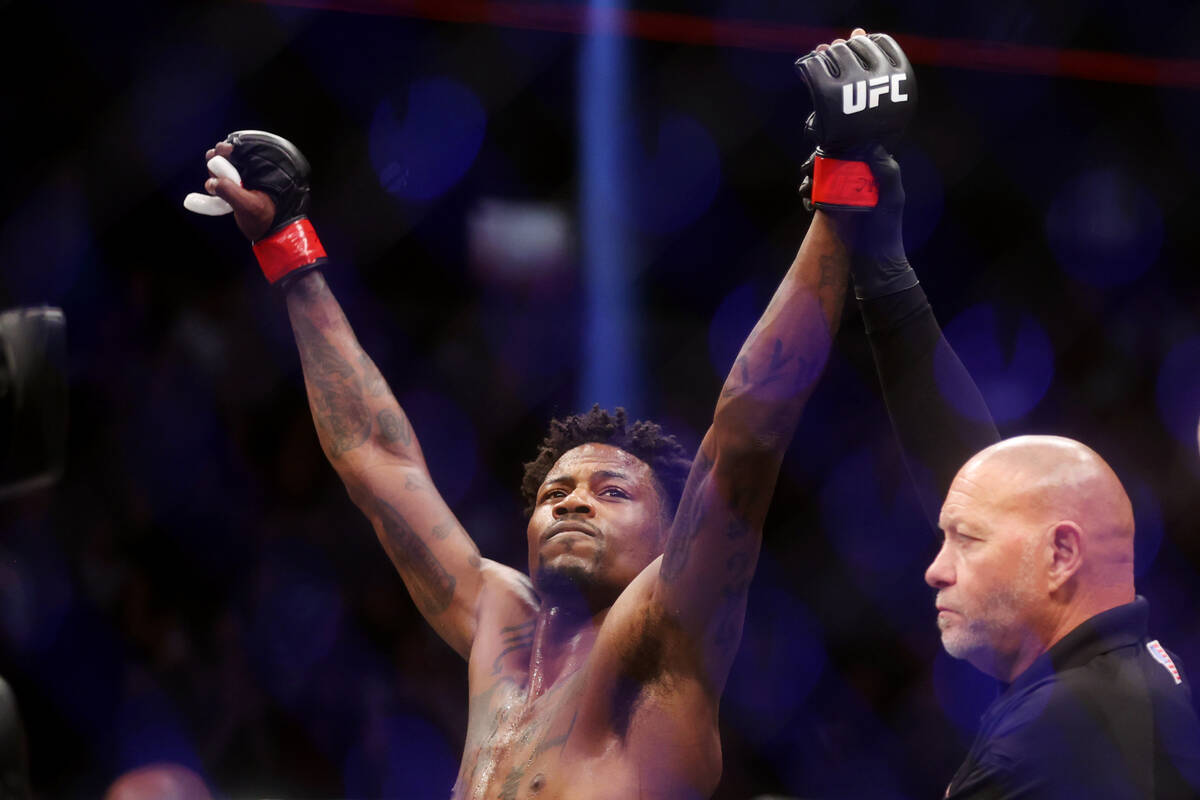 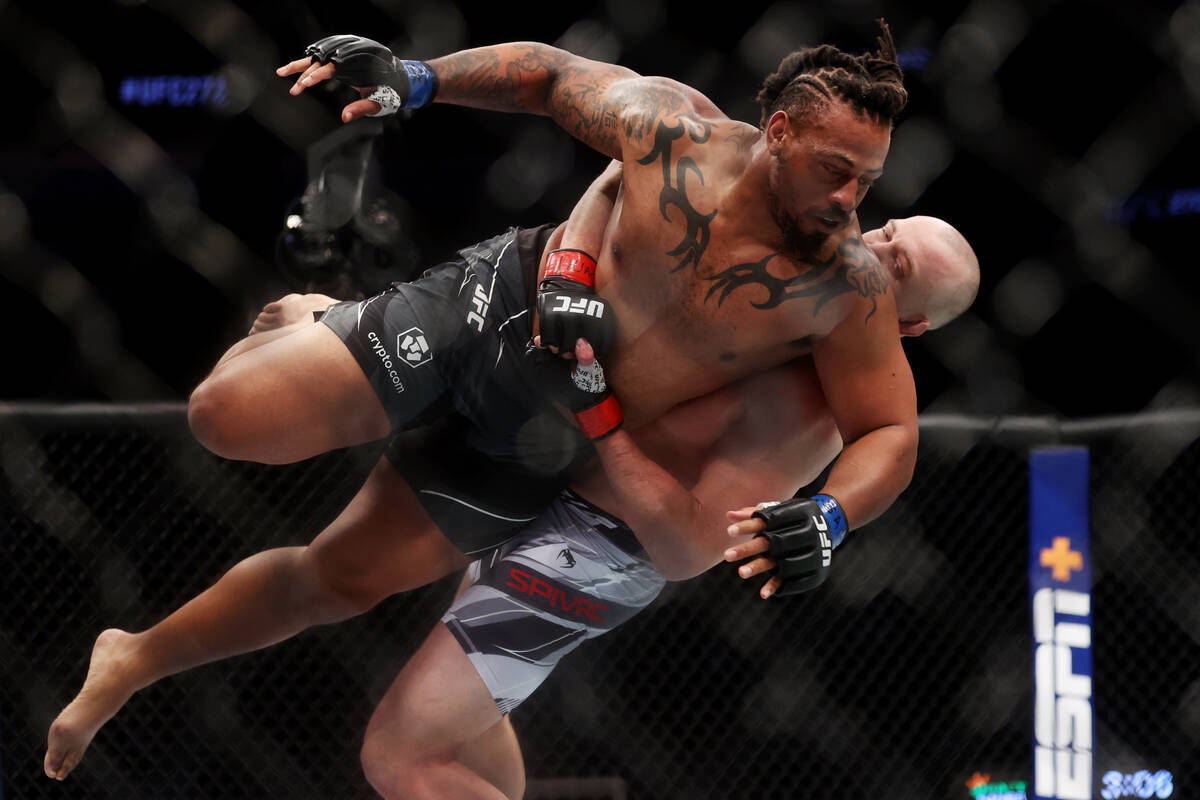 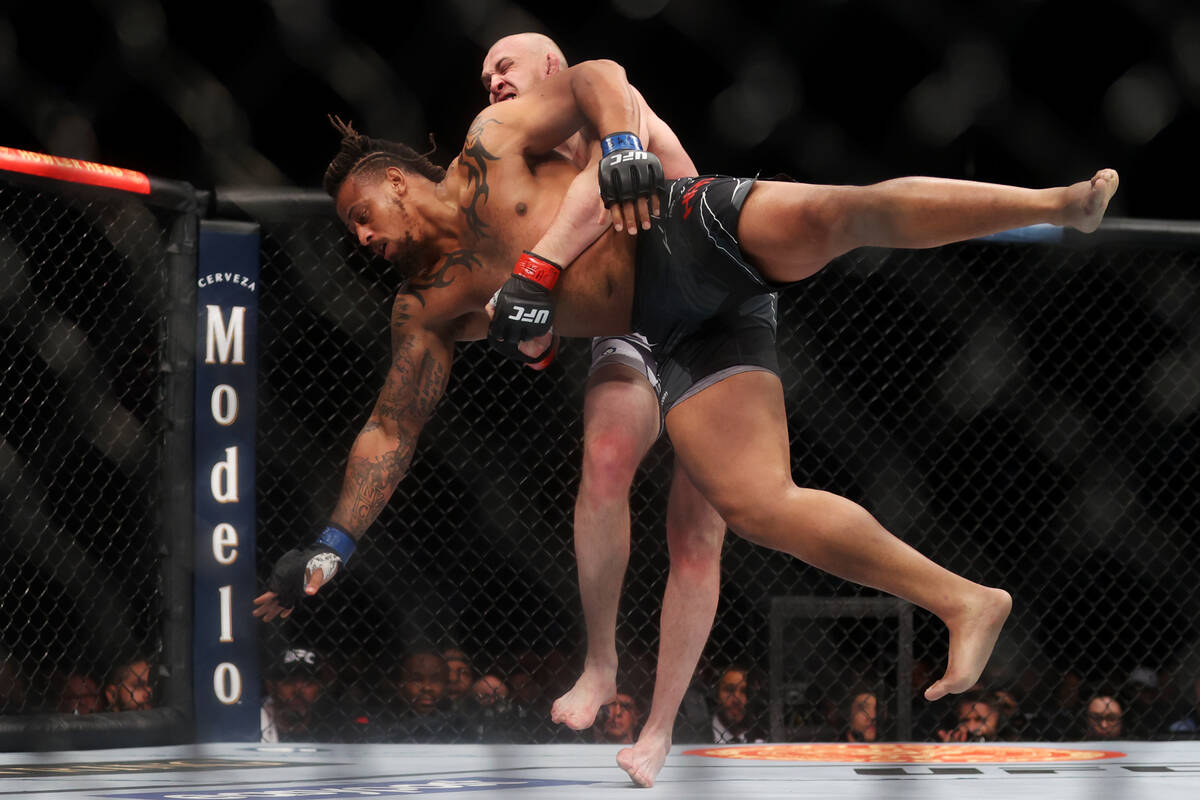 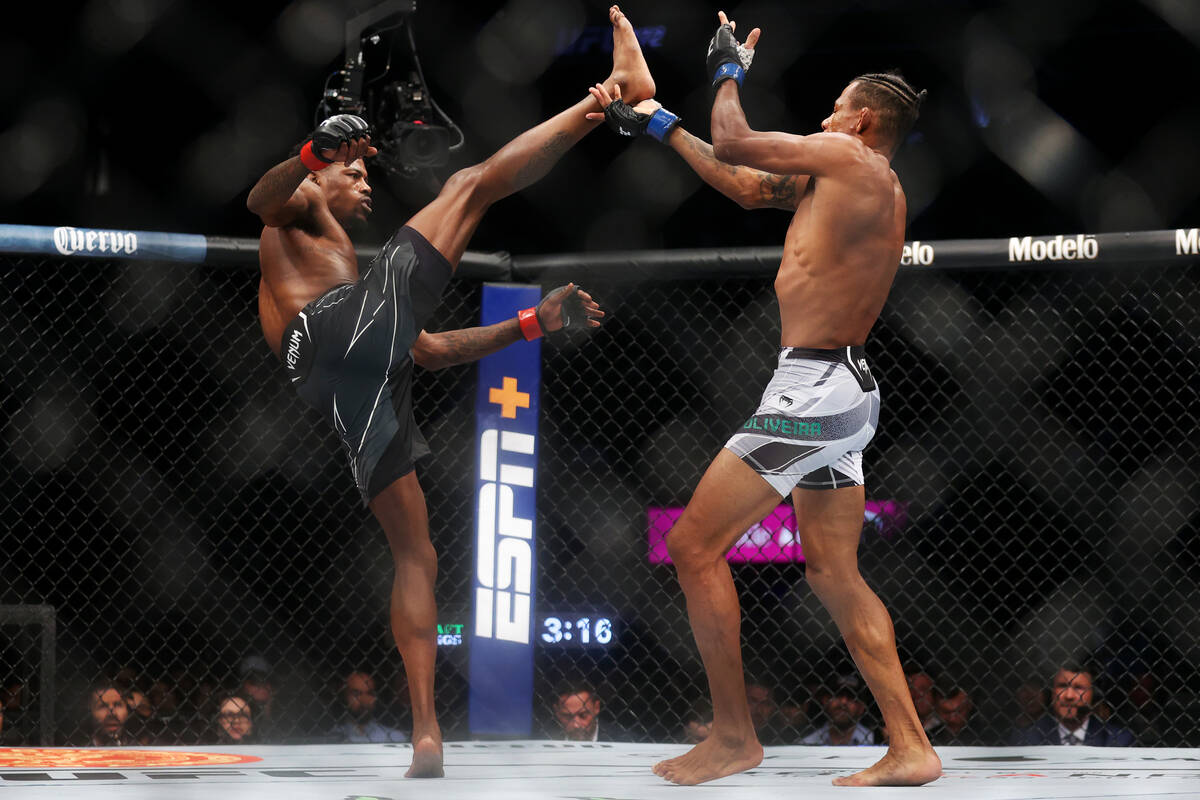 Kevin Holland, left, kicks Alex Oliveira in the first round of an UFC 272 welterweight bout at T-Mobile Arena in Las Vegas, Saturday, March 5, 2022. Holland won by way of technical knockout in the second round. (Erik Verduzco / Las Vegas Review-Journal) 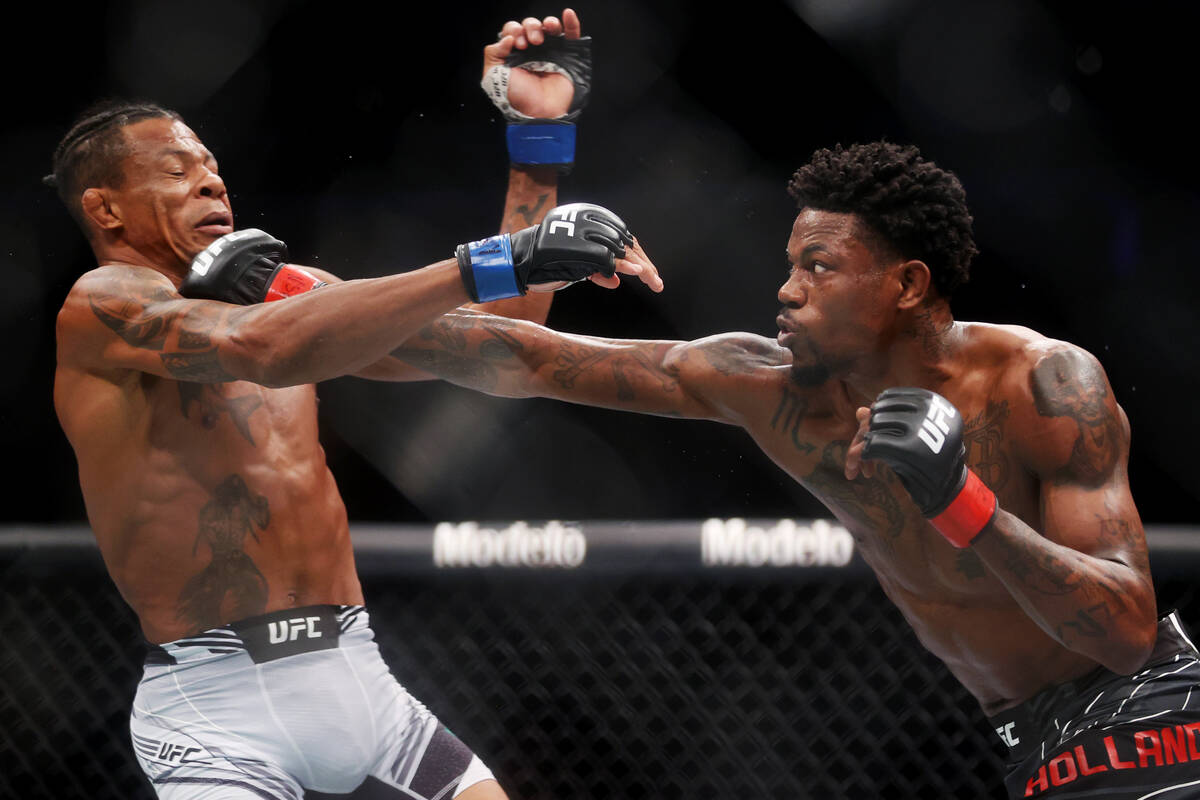 Kevin Holland, right, connects a punch against Alex Oliveira in the first round of an UFC 272 welterweight bout at T-Mobile Arena in Las Vegas, Saturday, March 5, 2022. Holland won by way of technical knockout in the second round. (Erik Verduzco / Las Vegas Review-Journal) 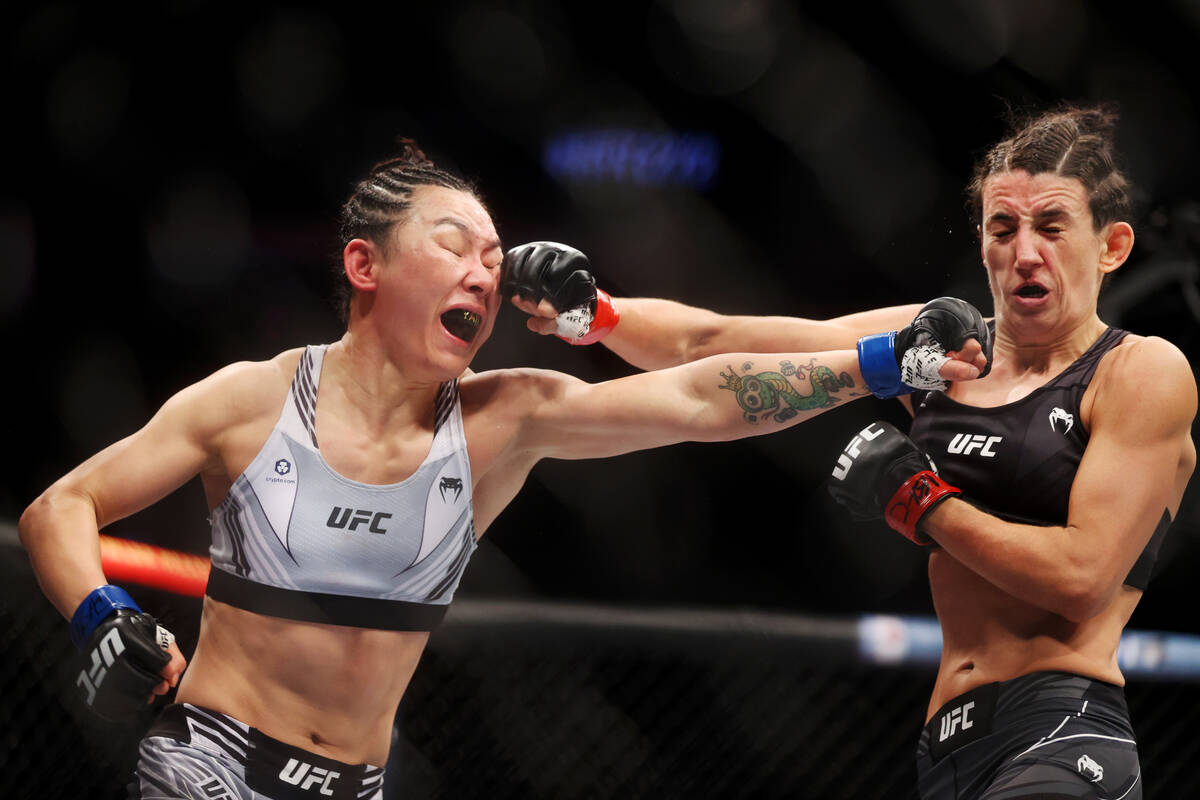 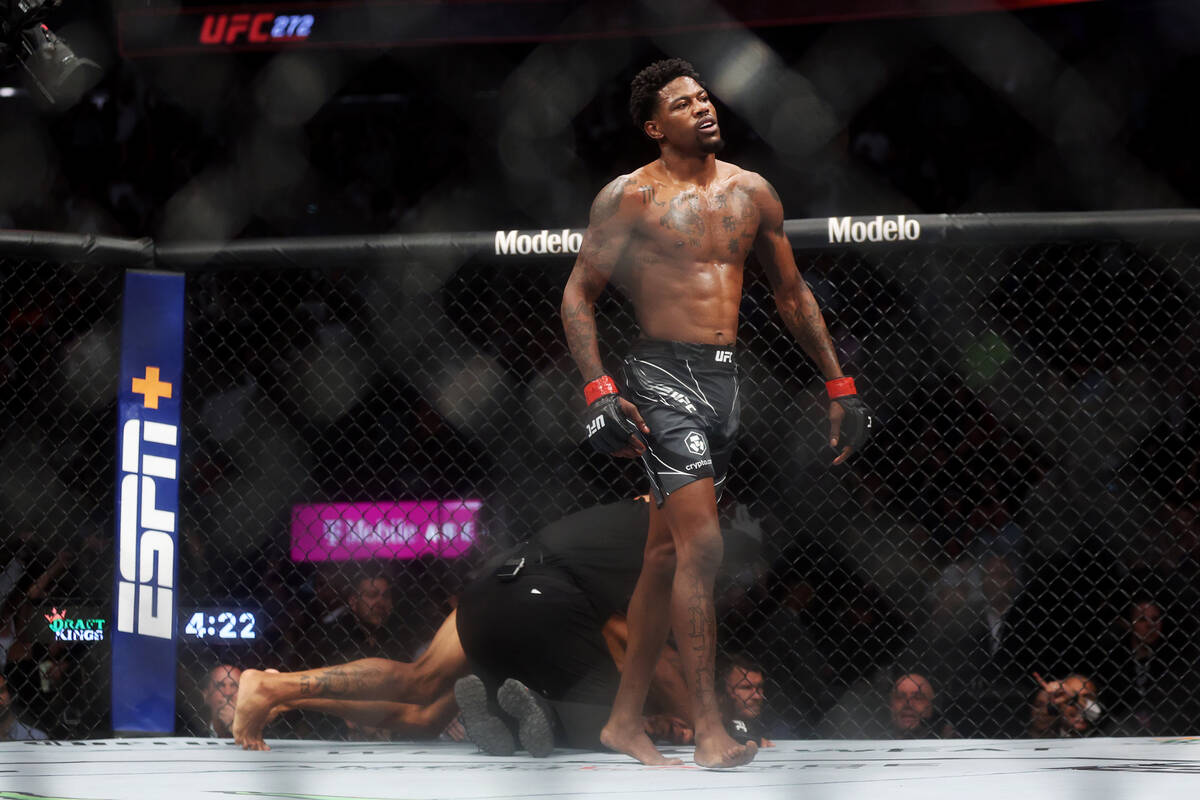 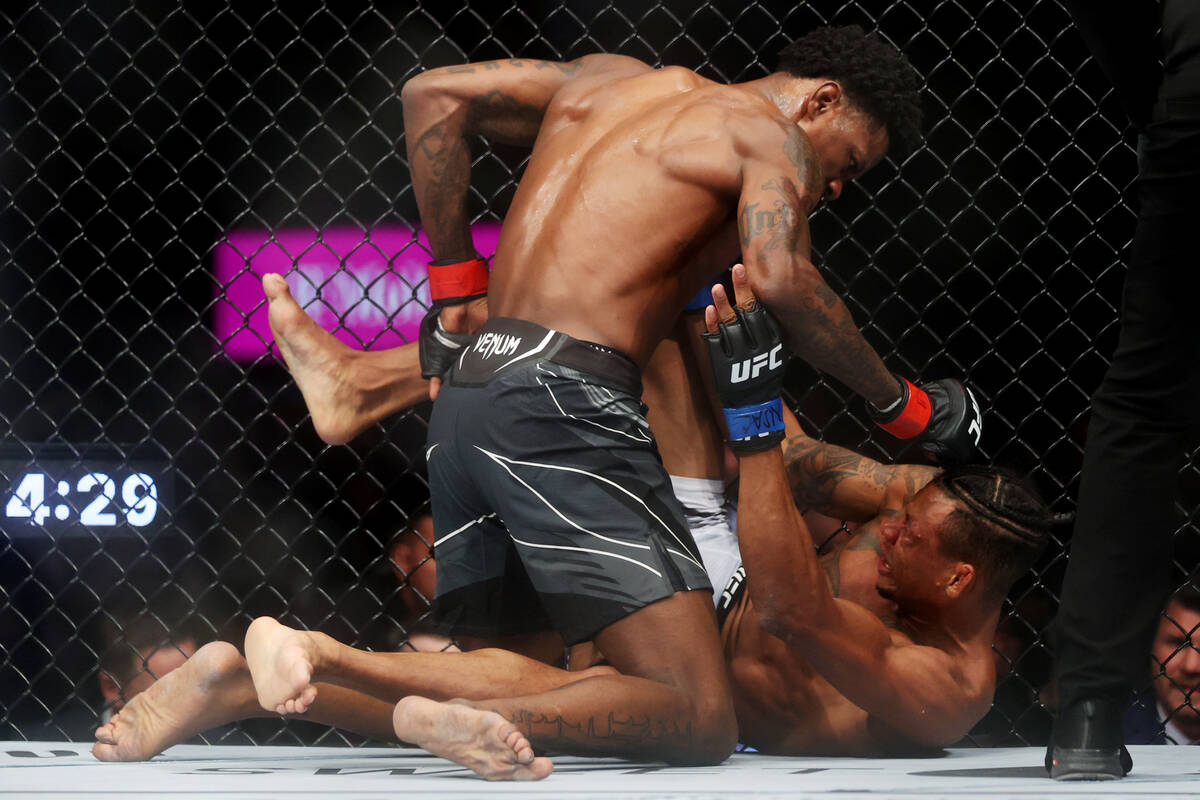 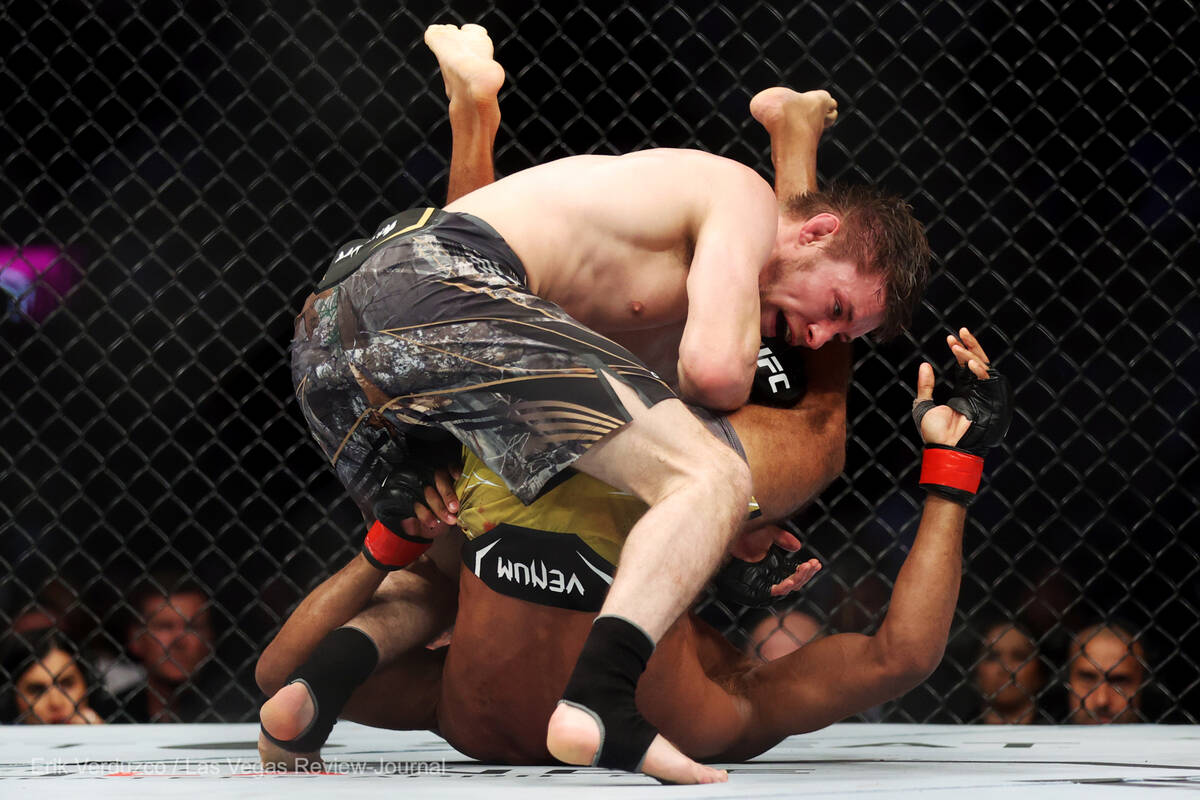 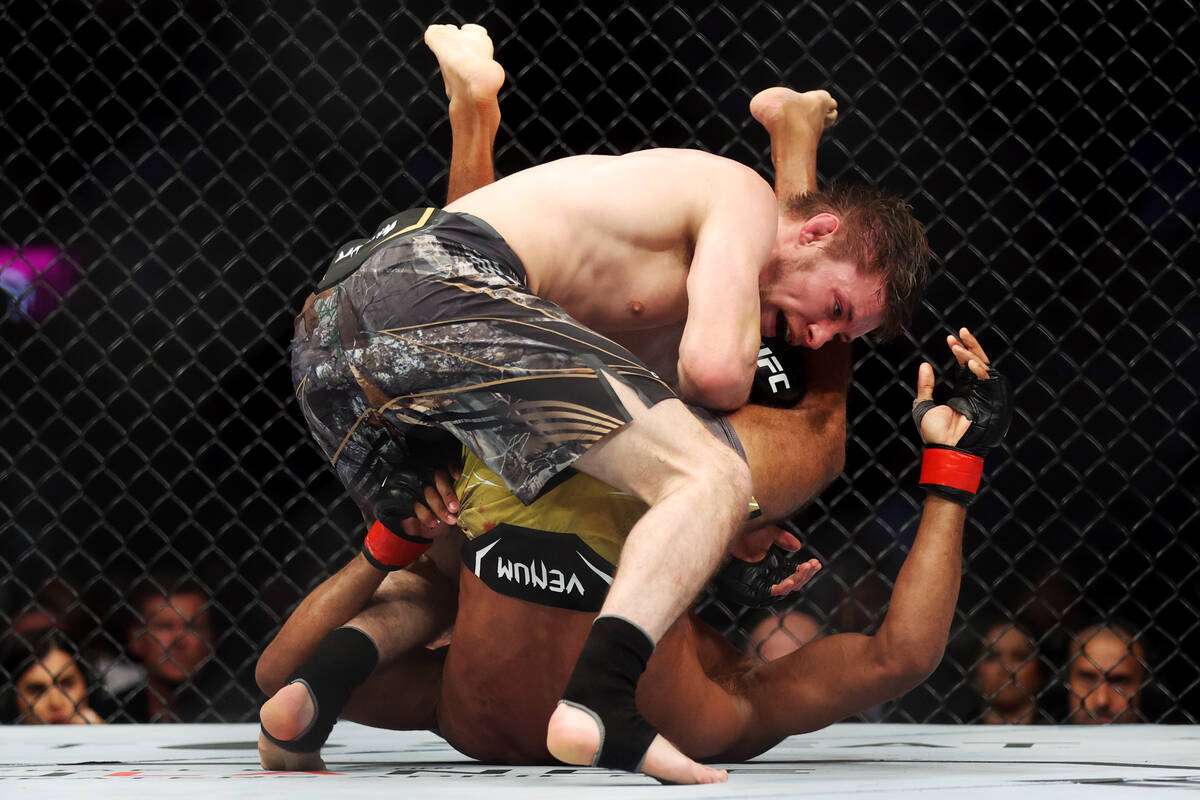 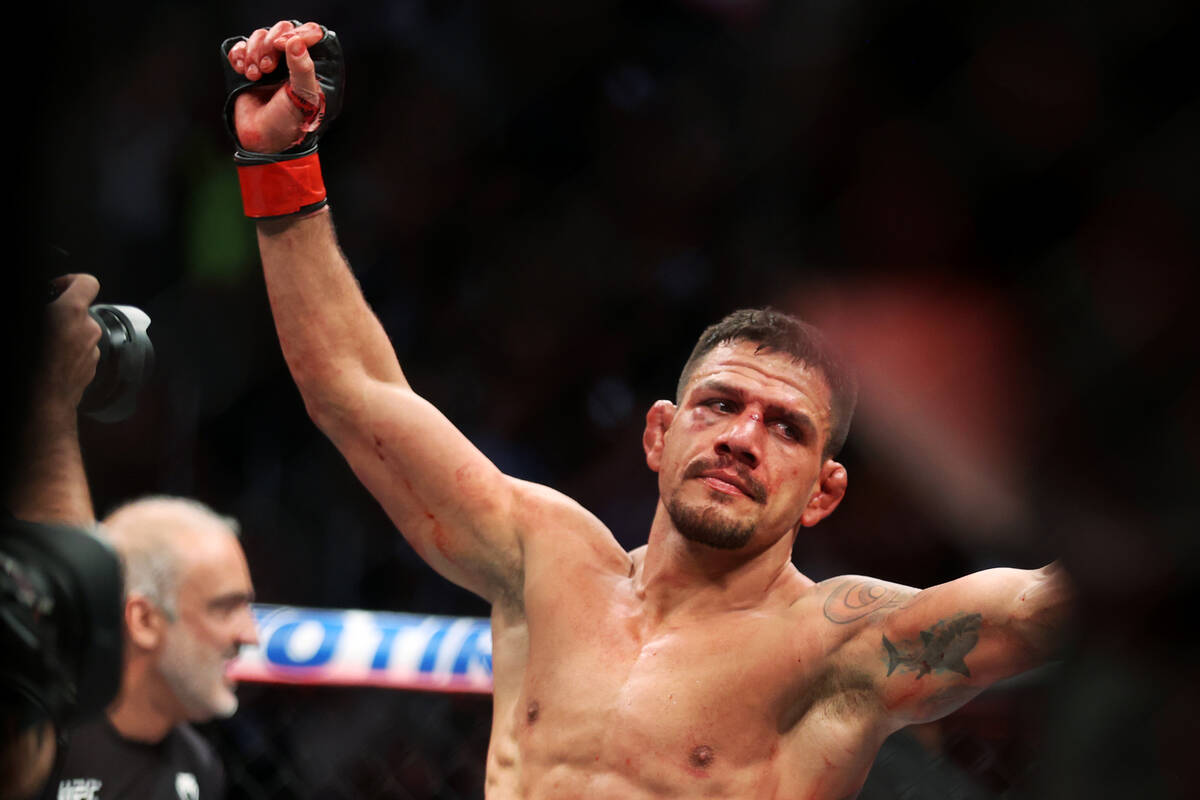 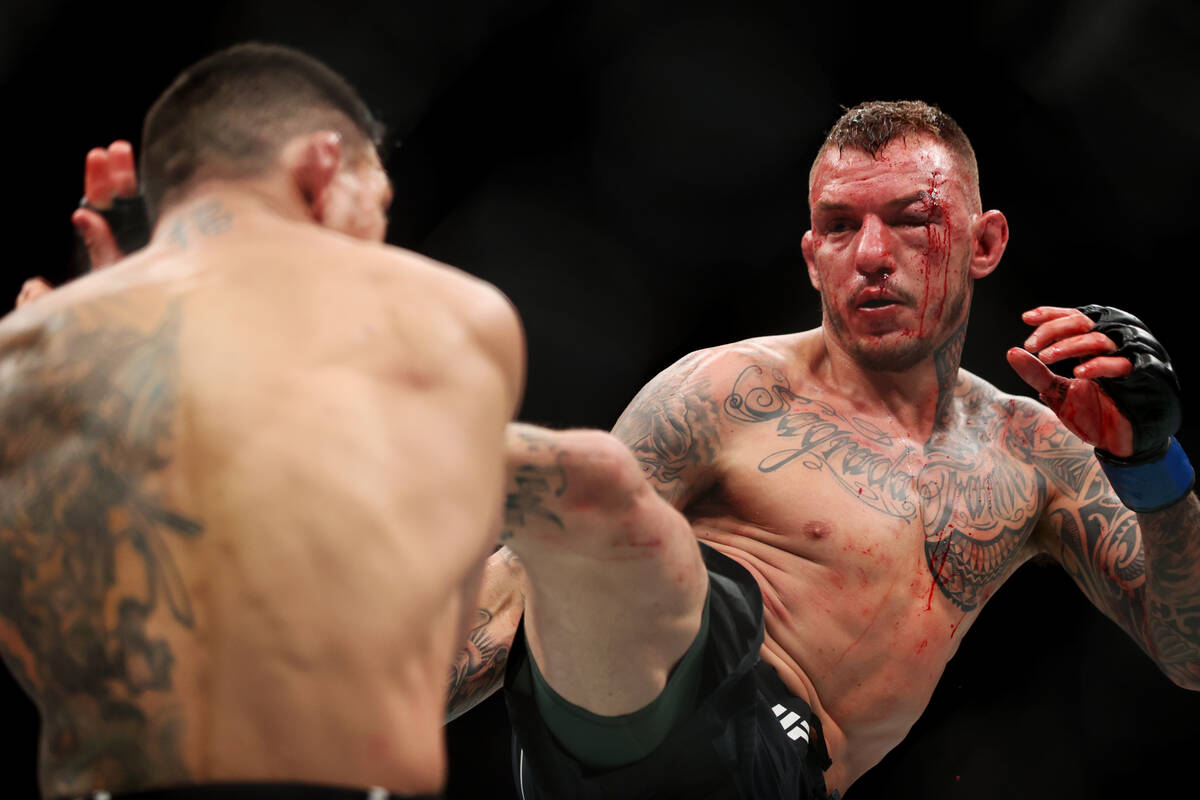 Colby Covington wore down Jorge Masvidal to win the grudge match between former best friends and roommates in the main event of UFC 272 on Saturday night at T-Mobile Arena.

Covington, who is 9-2 since the start of 2016 with the only two losses coming in title fights against welterweight champ Kamaru Usman, controlled the fight on the mat and against the cage.

He also found some success in the striking game, though Masvidal had his moments in both the second and fifth rounds.

In the co-main event, former champion Rafael dos Anjos spent nearly the entire 25 minutes controlling late replacement Renato Moicano on the mat and inflicting damage with his fists and elbows.

The ringside doctor conferred with Moicano and the referee after both the third and fourth rounds, but allowed the fight to continue.

Moicano showed signs of life in the fifth round, but it was far too late as dos Anjos won his second straight bout.

He was supposed to fight Rafael Fiziev, but Fiziev tested positive for COVID earlier in the week and had to pull out of the bout. Moicano agreed to step in at a 160-pound catchweight.

Featherweight Bryce Mitchell continued his ascent with a mauling of Edson Barboza in what was expected to be his toughest test to date.

Mitchell took Barboza down repeatedly and cruised to a one-sided unanimous decision. His only loss was on “The Ultimate Fighter” reality show and he’s now won all six of his fights in the UFC.

Kevin Holland started off slow in his welterweight debut, but rallied to knock out Alex Oliveira 38 seconds into the second round.

Holland dropped from 185 pounds after dropping his last two fights in the weight class. He said he’s willing to take fights in either division going forward.

Former NFL star Greg Hardy was knocked out in the first round by heavyweight Sergey Spivak in the opening fight of the main card.

Spivak wrestled Hardy to the ground and thwarted several attempts by the former Pro Bowl defensive end to get back to his feet before landing an extended series of punches to end the fight.

It was the third straight knockout loss for the 33-year-old with a troubling legal history, who has been out of the NFL since 2015 and started fighting in 2016.

On the preliminary card, Ukrainian women’s flyweight Maryna Moroz battled through a heavy heart to submit former friend and teammate Mariya Agapova in the second round.

There was a nasty back-and-forth between the two leading up to the fight, but Moroz became far more concerned with developments back home over the last two weeks.

“All this week I felt very nervous. I cried. I tried to focus,” she said. “It was really hard for me. I see in Ukraine how terrible the situation is. It was really my heart almost crying. But I did it. I focused, and I did fight.”

Moroz cried as she expressed fear for the safety of her family in the midst of the Russian invasion, but said she cannot return home because of Visa issues and the difficulty of travel.

Her parents have been providing food for soldiers from their farm and her father has been making Molotov cocktails to help defend their land.

“Every day I have to worry about somebody coming to kill my family,” she said. “I want this to stop.”