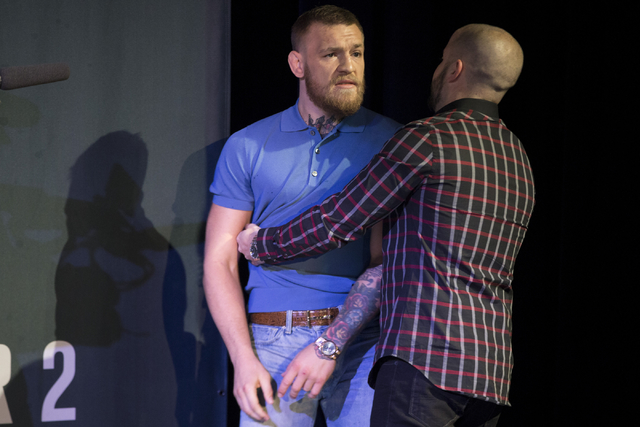 Conor McGregor is held back from an altercation with his team and that of his opponent Nate Diaz during the UFC 202 press conference at the MGM Grand hotel-casino on Wednesday, Aug. 17, 2016, in Las Vegas. (Erik Verduzco/Las Vegas Review-Journal) Follow @Erik_Verduzco

That was one expensive bottle of water.

UFC star Conor McGregor was fined $150,000 and ordered to perform 50 hours of community service as a result of a bottle-throwing incident at a news conference to promote his August fight against Nate Diaz.

In a Monday morning meeting at the Grant Sawyer Building, the Nevada Athletic Commission voted unanimously on the penalty.

The commission also instructed McGregor to produce a public service announcement for an anti-bullying campaign, an idea proposed by McGregor’s representative.

The featherweight champion will be allowed to use five hours of the community service time and half the fine on producing and promoting the PSA. The other half of the fine will go to the state’s general fund.

The fine represented 5 percent of his record-setting $3 million purse.

“I get fined more than these bums get paid,” McGregor posted to Twitter on Monday afternoon.

McGregor threw water bottles and cans of an energy drink from the stage after Diaz and his entourage had thrown similar objects from the back of the room following a public news conference at the MGM Grand two days before UFC 202 at T-Mobile Arena.

McGregor apologized to the commission for his actions by phone from Ireland, where he is training for a scheduled lightweight title bout against Eddie Alvarez on Nov. 12 in New York at UFC 205.

The attorney general’s office had recommended a $25,000 fine and some form of community service. The five commissioners almost immediately agreed the penalty needed to be more severe to send the message that engaging in actions that the safety of the public in jeopardy would not be tolerated.

Attorney Jennifer Goldstein, who was representing McGregor on the matter, proposed the anti-bullying campaign. She presented video of the incident to make the case Diaz and his entourage were the first to begin throwing bottles and argued her client wanted to reserve the right to argue self-defense on appeal should the matter potentially result in a suspension that could prevent McGregor from fighting Alvarez.

When it was McGregor’s turn to testify, he issued an apology and said he deserved to be disciplined. McGregor stated he would accept whatever penalty the commission saw fit.

As deliberations progressed, a figure of $300,000 was discussed, which would have represented 10 percent of his show purse. That number would have fallen in line with the percentage of purse Jon Jones and Daniel Cormier were docked for brawling in the lobby of the MGM Grand following a news conference.

“I have a really hard time with a $300,000 fine for throwing a water bottle,” said NSAC chairman, Anthony Marnell. “Yes, someone could have gotten seriously hurt. No one did.

They were throwing cans at each other like children.”

Diaz will also face discipline for the incident, though he was not on Monday’s agenda as he requested a continuance.

Dan Henderson was unable to accomplish his goal of retiring as a UFC champion, but he’s content with his career after officially confirming his retirement following a loss to middleweight champ Michael Bisping on Saturday.

“I feel like before this fight I accomplished enough in the sport and was satisfied with that, but obviously there’s one more thing I wanted to do and really worked my (expletive) off during training camp and thought I was ready to get it done,” Henderson said after losing a unanimous decision in the main event of UFC 204 to Bisping in a fight Henderson felt he had done enough to win. “I’m a little frustrated feeling like I did get it done and didn’t get credit for it, I guess. Like I said, it is what it is, there’s no changing that now I don’t think and I’ve just got to live with it.”

Henderson, a two-time Olympian in wrestling, was a two-division titlist in Pride Fighting Championships and also held a Strikeforce belt.

Diaz has been reprimanded for his very public violation of the UFC’s drug policy, but won’t face further discipline.

The United States Anti-Doping Agency, which independently administers the UFC’s testing program, announced Thursday that Diaz had accepted a public warning for smoking Cannabidiol from a vape pen during the post-fight news conference following his UFC 202 loss to Conor McGregor at T-Mobile Arena on Aug. 20.

The substance is banned during the “in-competition” period, which runs from six hours before weigh-ins until six hours after the conclusion of the bout.

5
Death Valley: Before and after flooding as seen from space — PHOTOS