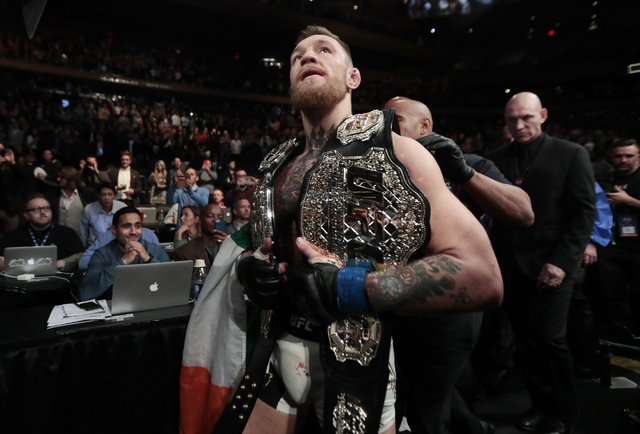 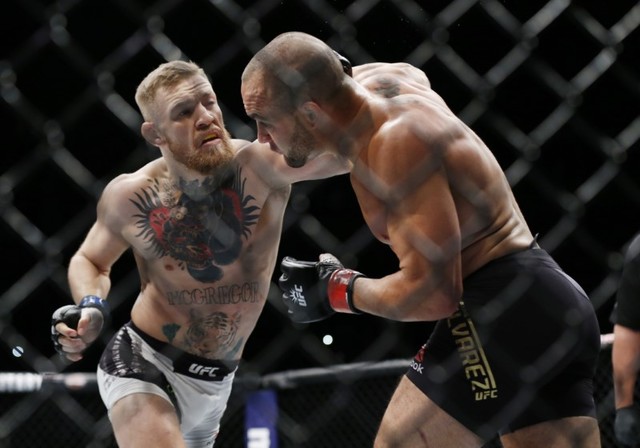 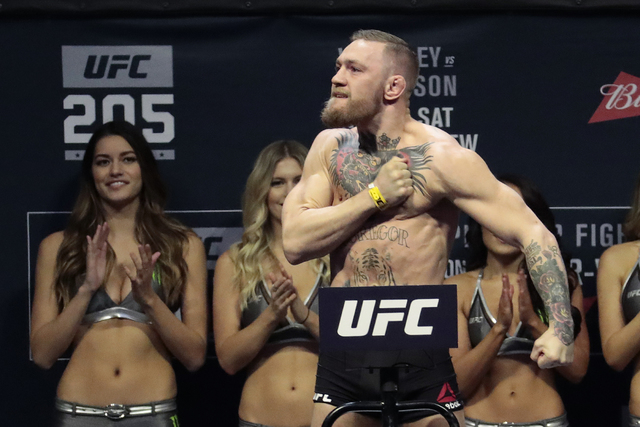 Conor McGregor stands on a scale during the weigh-in for his UFC 205 mixed martial arts bout against Eddie Alvarez, Friday, Nov. 11, 2016, at Madison Square Garden in New York. (Julio Cortez/AP)

UFC superstar Conor McGregor is now a licensed boxer in the state of California.

California State Athletic Commission officials confirmed an ESPN report that McGregor had been granted a license in the state.

McGregor’s efforts to gain licensure to box in Nevada were not successful, however.

Nevada Athletic Commission executive director Bob Bennett told the Review-Journal late Wednesday that McGregor’s representatives had also filed an application for a boxing license in the state on Wednesday, but there are several obstacles in the way.

First off, McGregor still owes the state a substantial amount of money and community service. McGregor was hit with a $75,000 fine in October for his role in a bottle-throwing incident during a news conference at the MGM Grand in August. He must also produce an anti-bullying video for the commission with a production budget of $75,000, an idea that was proposed by McGregor’s camp.

He is currently appealing the discipline and the case is headed to court.

Until that is resolved, any effort by McGregor to get licensed as a boxer in the state is a non-starter. He couldn’t even get licensed for an MMA fight at this point.

Should those issues be resolved, it’s still not an automatic McGregor would be granted a boxing license in Nevada just because he was given one in California.

“That’s just between him and the California commission,” Bennett said.

Bennett said he would need to either see footage of a McGregor sparring session in boxing or attend a session on his own to determine whether to even take the next step in granting a license for McGregor to participate in a completely different sport than the one in which he currently competes.

“Mr. McGregor is an incredibly gifted fighter and athlete. He obviously knows what he’s doing as a fighter and I have the utmost respect for his abilities,” Bennett said. “But it is a different sport.”

There is still a great deal of speculation about exactly why McGregor is filing for a license. He is under a long-term contract with the UFC and it’s unlikely the organization would allow him to compete as a boxer without an extended legal fight.

Of course, there is a long-running war of words in the media between McGregor and retired boxer Floyd Mayweather Jr. about a possible fight.

While it would probably be the biggest fight either of them could currently sign, there are significant contractual complications standing in the way.

The rumors have served to keep them both in the news at various times over the last few years, however.

McGregor announced he would take a hiatus from fighting as he and his girlfriend are expecting the birth of their first child in early 2017.

He also may be sending a message to the UFC, which stripped his featherweight title this week. McGregor still holds the lightweight belt, but was believed to be upset with the UFC’s decision.

The fact McGregor even applied for a license in Nevada may be relevant in the sense he vowed to never fight in Nevada again in protest to what he believed was a harsh penalty from the NAC.