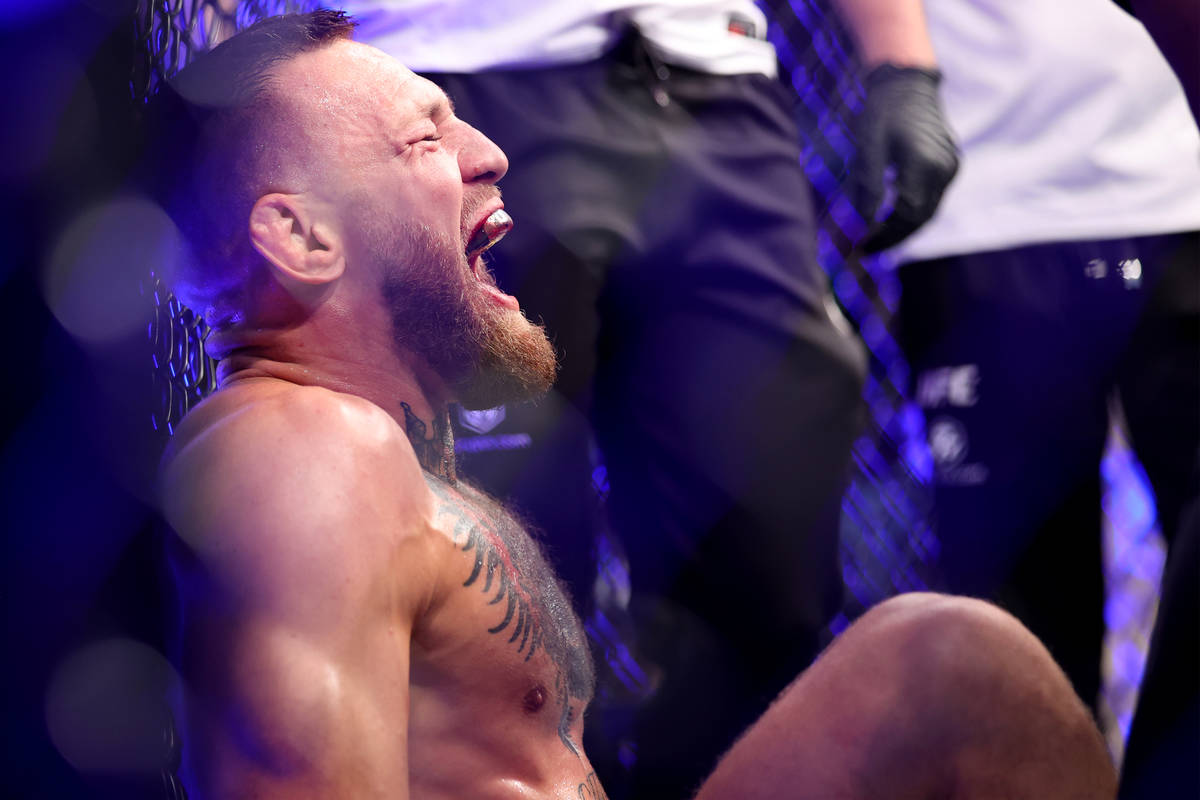 Conor McGregor yells in pain after hurting his foot in the first round of a lightweight bout against Dustin Poirier during the UFC 264 event at T-Mobile Arena in Las Vegas, Saturday, July 10, 2021. Poirier won by way of technical knockout in the first round. (Erik Verduzco / Las Vegas Review-Journal) @Erik_Verduzco 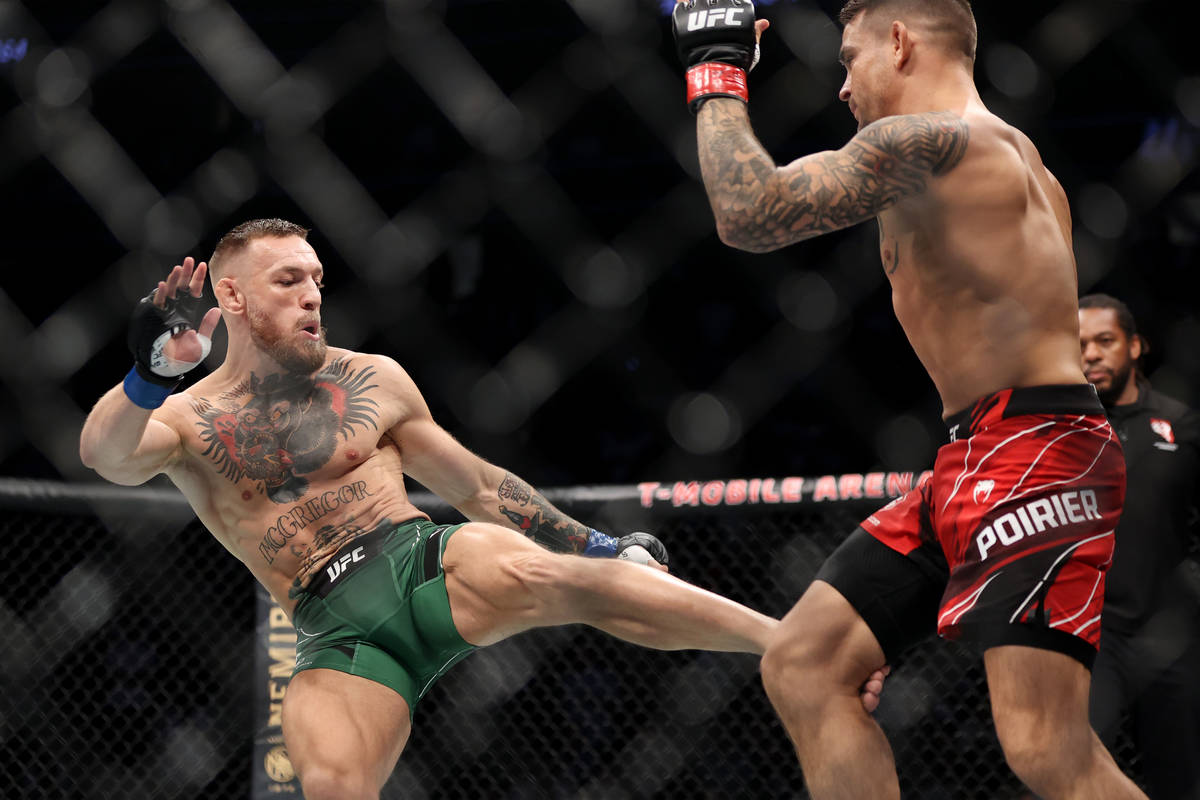 Conor McGregor, left, kicks Dustin Poirier in the first round of a lightweight bout during the UFC 264 event at T-Mobile Arena in Las Vegas, Saturday, July 10, 2021. Poirier won by way of technical knockout in the first round. (Erik Verduzco / Las Vegas Review-Journal) @Erik_Verduzco 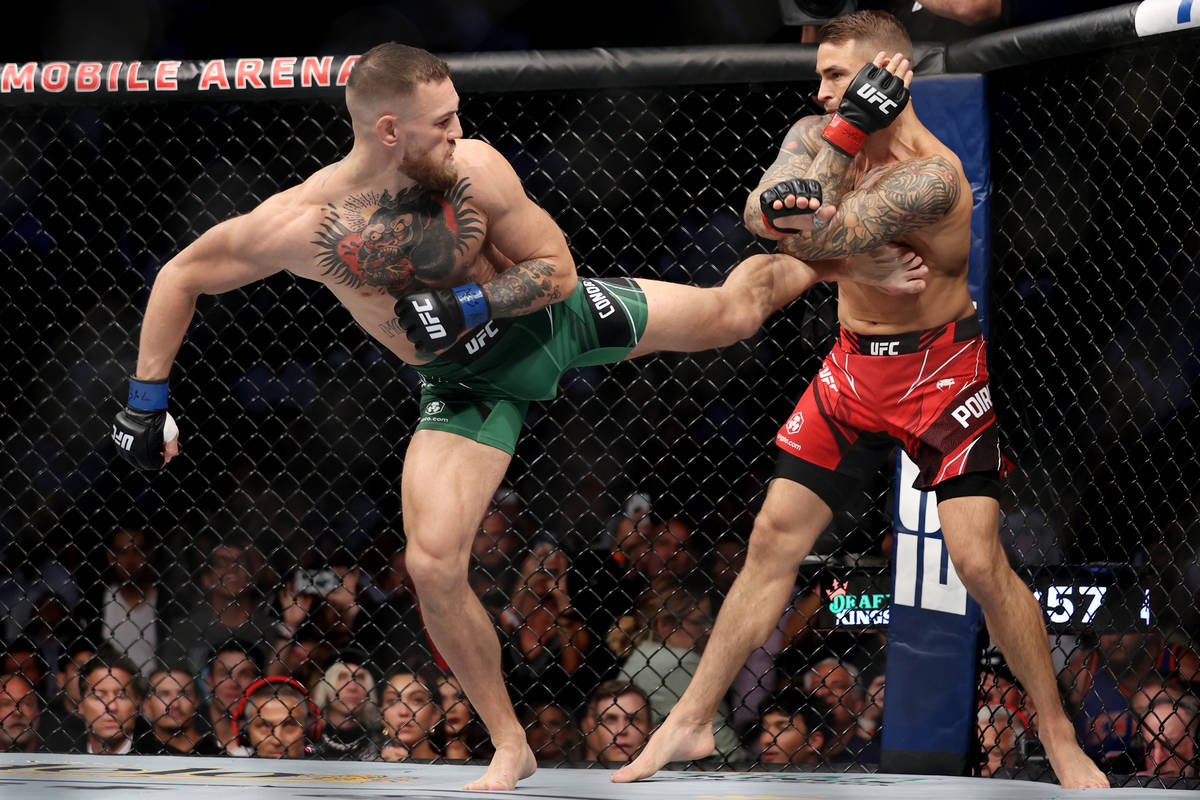 Conor McGregor remained defiant hours after undergoing surgery to repair a broken left leg suffered late in the first round of his loss to Dustin Poirier on Saturday night.

The ringside physician recommended the fight be stopped between the first and second rounds because of the injury, awarding Poirier a technical knockout victory in the main event of UFC 264 at T-Mobile Arena.

“Dustin, you can celebrate that illegitimate win all you want, but you done nothing in there,” McGregor said in a video posted on social media from what appeared to be his hospital bed. “That second round would have shown all. Onwards and upwards we go, team. We dust ourselves off, build ourselves back and come back better than ever.

“It was a hell of a first round. It would have been nice to get in the second round and see what’s what, but it is what it is. That’s the nature of the business. It was not to be.”

McGregor then took to his Instagram story in the early hours of Monday, alternating pictures of himself and Poirier from after the fight in an effort to show he did more damage in the fight.

Poirier said he didn’t feel the closure he had hoped for in the rubber match of their contentious trilogy, but insisted the damage had been done to McGregor on a checked kick and was not a fluke.

McGregor was transported to Los Angeles for surgery on a broken tibia and to repair the fibula, which took more than three hours and was done by Dr. Neal El Attrache and Dr. Milton Little.

The procedure was deemed a success. Now McGregor can turn to his recovery.

“Everything went to plan, everything went perfect,” McGregor said. “I’m feeling tremendous. We have six weeks on (crutches) now and then we begin to build back.”

What happens then remains to be seen. UFC president Dana White said the ending of the fight was unsatisfying, and he expects a fourth fight between McGregor and Poirier. But a title shot is on tap for Poirier, and it might be a tough sell to book McGregor into a championship bout should Poirier win, considering McGregor is 1-3 in his past four fights and has one win since 2017.

Those are all questions for the future. For now, McGregor will focus on getting better with the comfort of knowing he’s still a massive draw at the box office.

Saturday’s event drew 20,062 fans, a record for a sporting event at T-Mobile Arena. The live gate was $15,759,800, the second-highest amount for a live gate at the venue and third-most anywhere.