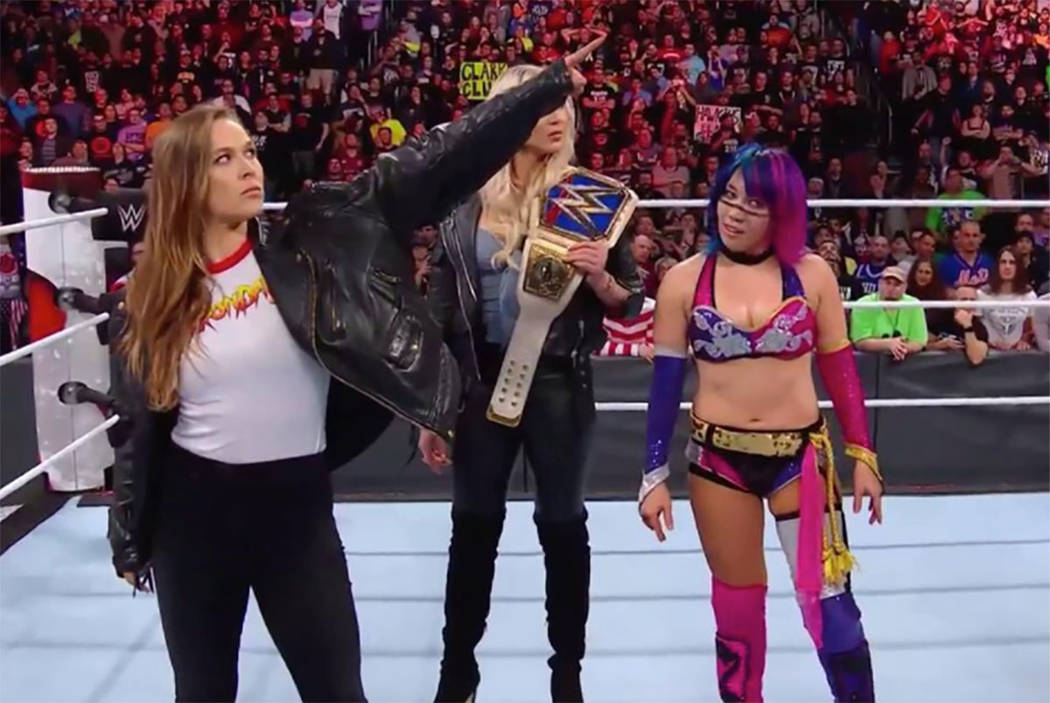 Now she will make a living pretending to do it.

The 30-year-old made somewhat of a surprise appearance on the WWE’s Royal Rumble event in Philadelphia and officially announced her arrival in the organization.

Rousey walked into the ring at the conclusion of the broadcast and pointed at a Wrestlemania sign, apparently signaling her interest in making her professional wrestling debut at the WWE’s marquee event in April.

She told ESPN.com she has signed with the WWE and will be a full-time performer.

“This is my life now,” she told the website. “First priority on my timeline for the next several years. This is not a smash-and-grab; this is not a publicity stunt. When I first met with Triple H, I told him, ‘There are other things I can do with my time that’ll make way more money, but I won’t enjoy nearly as much.’ ”

Rousey, who has not officially retired from professional mixed martial arts competition, is a lifelong fan of pro wrestling who has flirted with a move to the WWE for several years.

Her nickname “Rowdy” is a tribute to Roddy Piper and Rousey has made multiple cameos on various WWE shows and promos. Rousey and her friends Marina Shafir, Jessamyn Duke and Shayna Baszler were known by the collective nickname of the Four Horsewomen of MMA, a tribute to the Four Horsemen of professional wrestling.

She also spent time training at the organization’s training center in Florida.

Baszler, a former UFC fighter, has been working her way up the ranks in professional wrestling and competed in an event in Philadelphia on Friday night.

Rousey made an effort to squash rumors of her appearance at the Royal Rumble with several social media posts in recent days about her time on set of feature film “Mile 22,” which she is appearing in with Mark Wahlberg and John Malkovich.

It’s unclear how often she will appear in WWE programming.

UFC president Dana White has said he doesn’t expect Rousey to compete again in the organization even though she is still under contract and according to him, remains in the random testing pool for the anti-doping program.

“I’m very happy for her,” he told the Review-Journal via text on Sunday night. “She loves pro wrestling and has always been a big fan so I know how much his means to her. She keeps accomplishing everything she’s ever wanted.”

Rousey is the first women’s champion in UFC history. She was undefeated until losing her belt to Holly Holm in Australia in November 2015. Rousey’s last fight in the UFC was a first-round knockout loss to Amanda Nunes in December 2016.