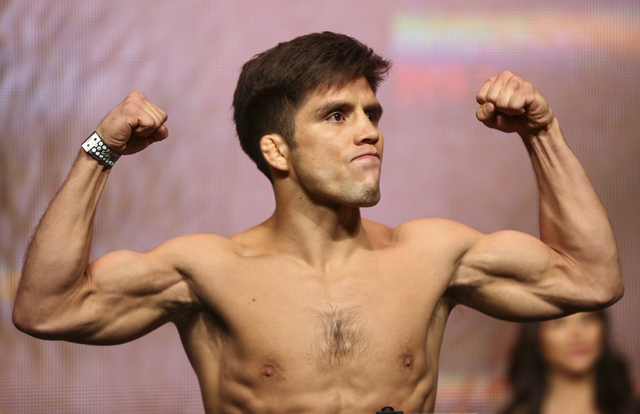 UFC flyweight contender Henry Cejudo believes he has moved on from the disappointment of losing a title bout to longtime champion Demetrious Johnson in April.

It wasn’t an easy process.

“It took a while,” he laughed. “I feel like I’m finally over it, I think. I’m just disappointed in myself, that’s all.”

Fortunately for the 2008 gold medalist in wrestling, Cejudo might not have to wait too long to get another crack at the biggest prize in his new sport.

Cejudo will face Joseph Benavidez on the finale card for Season 24 of “The Ultimate Fighter” on Dec. 3 at The Palms. Johnson will defend the belt against one of the contestants on the reality show in the main event of the card, which will air on Fox Sports 1.

Cejudo knows if he can defeat Benavidez and keep his name relevant, he will be right in the mix.

“It’s not like the Olympics where you have to wait four years,” he said. “I feel like I can just say something stupid and get another title shot. That’s just the reality.”

The 29-year-old Arizonan wants to make sure he’s ready to defeat Johnson before he steps in the cage again. He believed he was in April, but got a reality check when he took the first loss of his career as Johnson crushed him with a knee to the body and knocked him out in the first round.

“I got hit to the body and that was that,” Cejudo said. “I never really had a chance to test my skills against him.”

It’s not how he thought it was going to go that night. Cejudo, who had won his first 10 MMA fights and truly believed he was the best 125-pound fighter in the world, was convinced he would be celebrating when he left the arena.

“I definitely felt like I was going to dominate him,” Cejudo said. “I went into that fight thinking, ‘Today is the day I’m going to be world champion.’ There was no doubt in my mind. Not only am I going to beat Demetrious Johnson, but I’m going to show the world how good I’m capable of being. I’m just going to manhandle this dude. Surprise, surprise. Welcome to MMA. You live and learn from things like that. I can’t go back, but looking back I see areas I need to get better, things I need to improve in camp. You have to use it to make yourself better.”

That’s what Cejudo has been doing each and every day as he prepares to fight Benavidez, who coached opposite Cejudo on the reality show.

The fighters didn’t exactly hit it off and there has been quite a bit of tension as the season has progressed.

Cejudo said it’s part of why this fight may actually prove to be bigger than the title fight for his career.

“Every fight for me is a pressure fight,” he said. “But I think the pressure for me comes from the reality show and all the trash talking has made my family not like him. They’re telling me how bad they want me to beat him and that’s a lot of pressure for me.”

Cejudo also wants to stay in the title mix. He said he won’t accept the rematch against Johnson, however, until he feels he has done enough hard work and preparation to change the result. What he will do is sing Johnson’s praises as the best overall fighter in the UFC.

“He deserves it,” Cejudo said of the mythical title. “I didn’t buy into the whole pound-for-pound thing at first, but I saw it. He’s the real deal, man. You have to become a genius in all these different areas to beat him. He’s so good, man. As much as I hate to say it, he’s the best. I used to just say ‘It’s Jon Jones, it’s definitely Jon Jones.’ This dude’s been able to take down flyweights like they were nothing. I witnessed it myself. He deserves it. I’ve got to get up there.”

If he does, he can finally put the loss behind him for good.