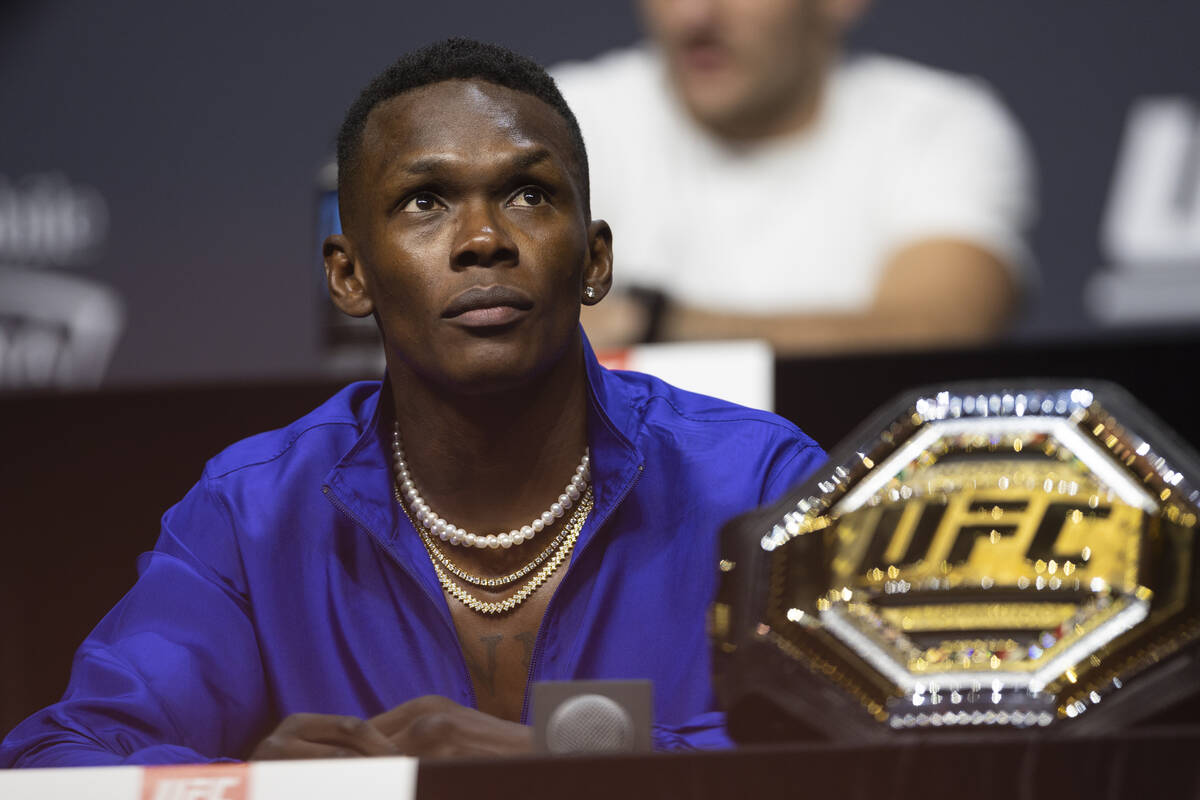 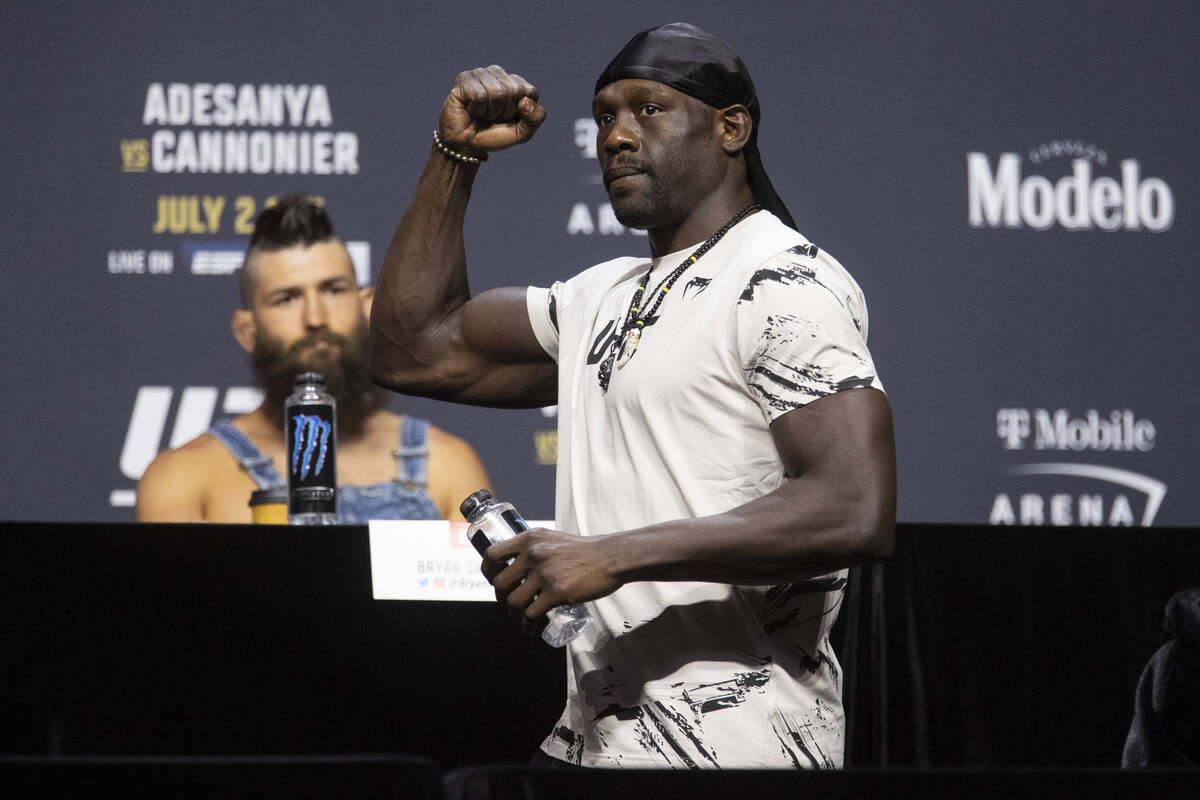 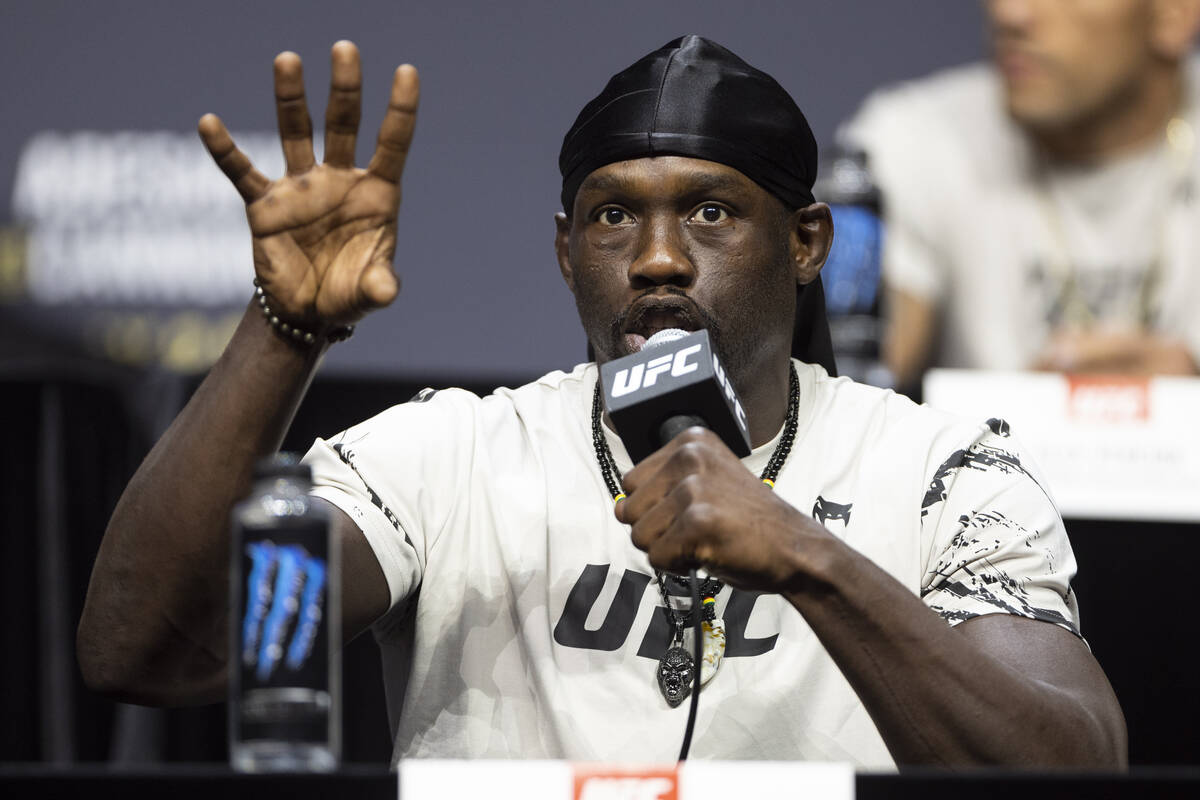 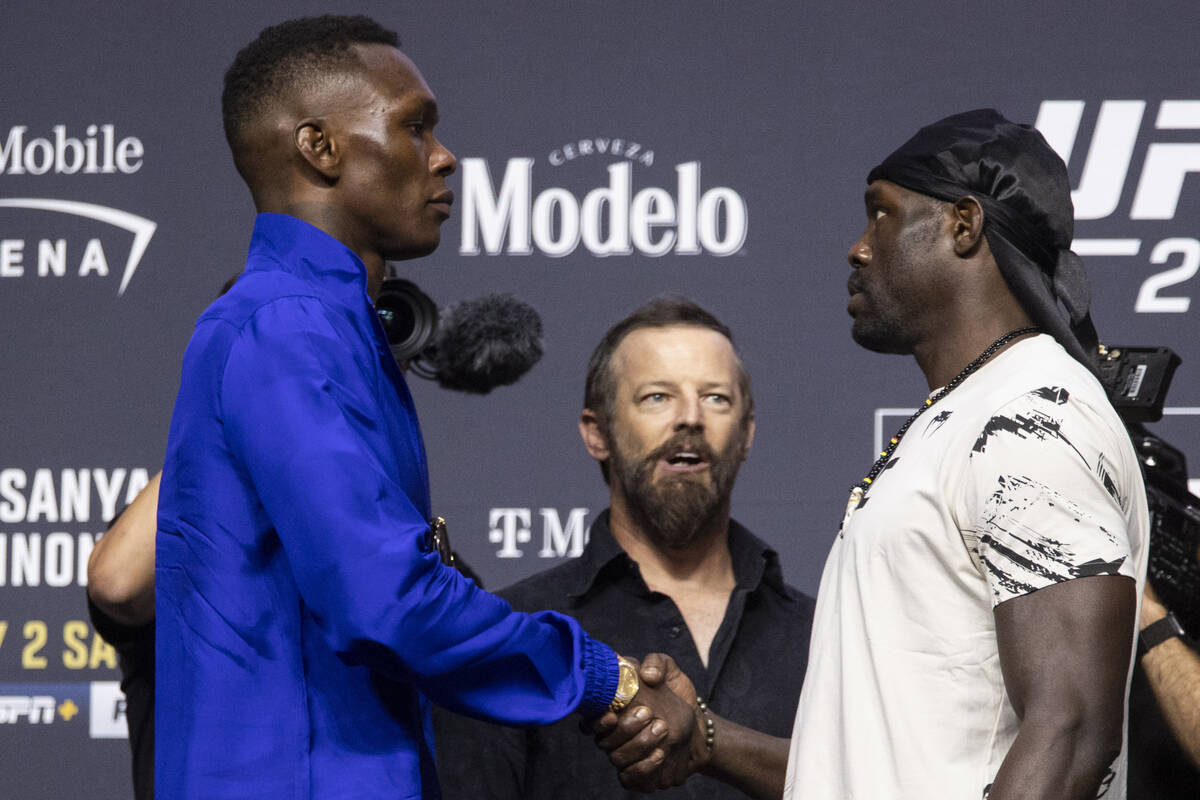 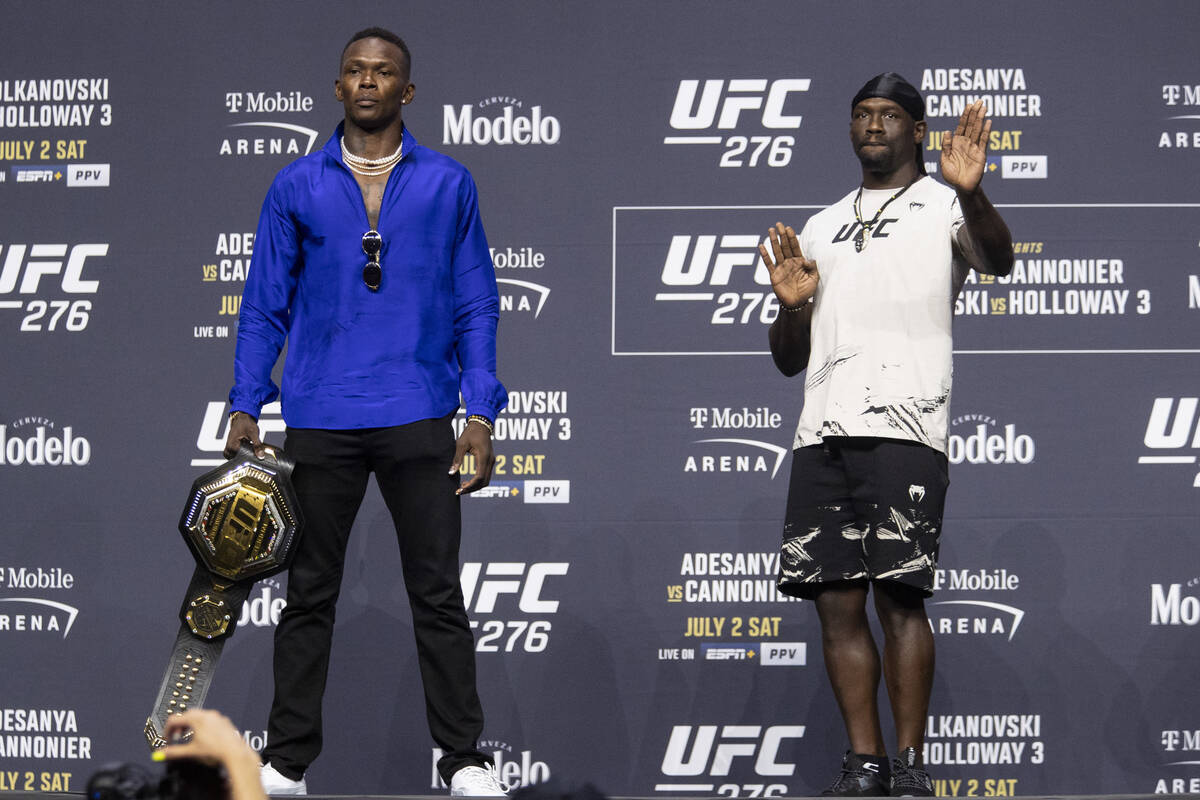 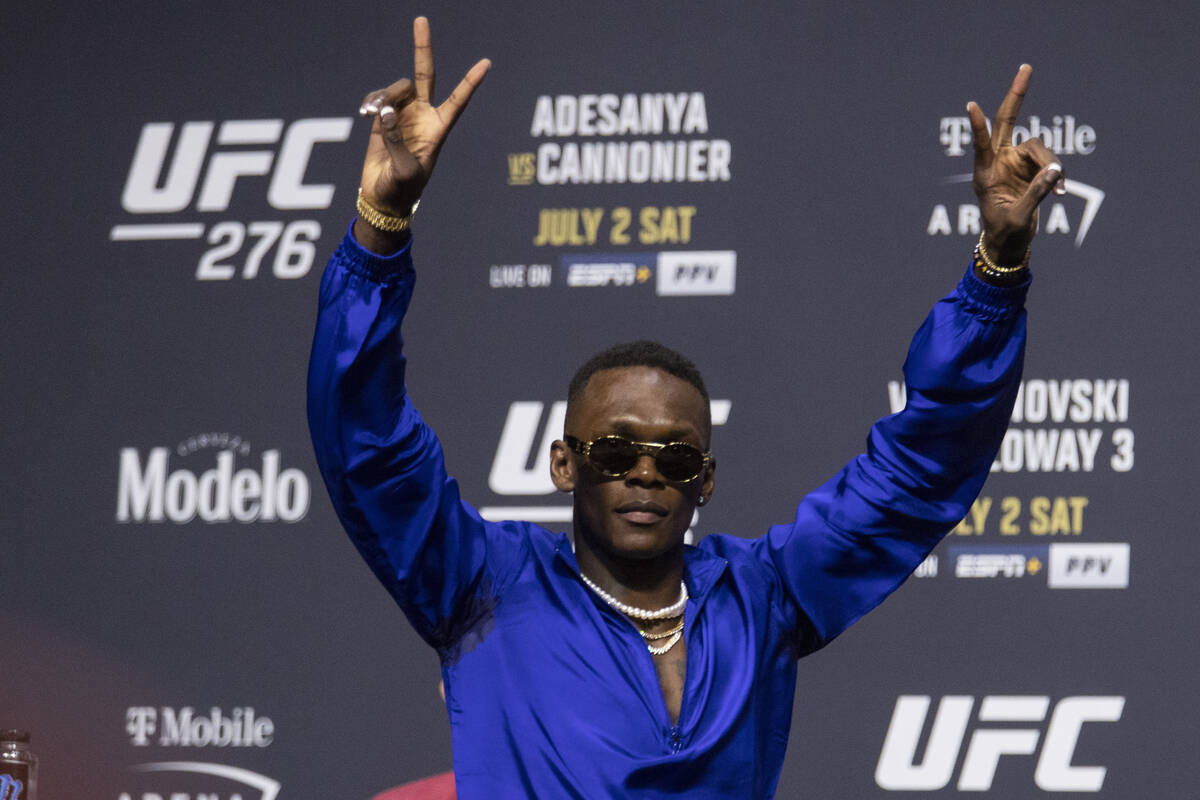 Middleweight champion Israel Adesanya sensed his opponent was starting to ramble on some of his answers during Thursday’s UFC 276 news conference at T-Mobile Arena.

So he offered some advice.

“You’ve got to keep it short and sweet,” he said over one of challenger Jared Cannonier’s more meandering responses.

There were signs of nerves from Cannonier, who will headline his first pay-per-view card Saturday when he steps in the cage to challenge Adesanya, whose only loss was when he moved up to challenge for the light heavyweight belt.

“Being under the spotlight is an acquired taste,” said Adesanya, one of the sport’s emerging superstars. “He’s mature. He’s a veteran in the game. He can handle the spotlight, but not like me.”

While Adesanya, 32, has been a star since his days as a world champion kickboxer, Cannonier’s path has been more circuitous.

He grew up in Texas and found himself doing maintenance on air traffic control equipment for the FAA in Alaska after he was discharged from the Army for a failed marijuana test.

Cannonier was putting on weight and began training in martial arts in 2009 when his wife, Cat, became pregnant with their first child. He took a couple of amateur fights and did well, turning pro in 2011.

After racking up a 7-0 mark in Alaska, Cannonier joined the UFC as a heavyweight and split his first two fights. It was at that point, seven years into training and five years into his pro career, that he decided to leave the job in Alaska where he was working 10-hour shifts and move his family to Arizona so he could train on a more full-time basis.

A stricter trainng regimen also precipitated a move to 205 pounds, where he went 2-3 against good competition. Cannonier believed he eventually would figure it out at light heavyweight but also knew he could get to 185 pounds and fight at middleweight.

He did so in 2018, and his career has taken off. The 38-year-old is 5-1 at middleweight with four knockouts. His only loss was to former champion Robert Whittaker when he sustained a broken arm early in the fight and gutted it out before dropping a decision.

Now he has the biggest opportunity of his career and knows he has earned it.

“I don’t doubt myself,” Cannonier said. “I’m not going to say I’m not capable or worthy. That’s asinine. I’m only trying to shoot up and ascend higher and higher.

“Emotions aren’t too different from normal fight week. I’m not putting too much extra pressure on myself. Fighting is stressful enough. Not that I’m taking it easy or anything, I work hard regardless. And I’m coming in with the same self-belief, the same confidence, the same energy that I plan on using to get the win.”

He knows it won’t be easy. While he said he has been able to block out the naysayers, trash talk and negativity, Cannonier is aware he’s more than a +350 underdog in the fight.

But his power can be a great equalizer. He has 10 knockouts among his 15 pro victories and said a perfect fight would be ending it with one punch.

Adesanya, one of the flashiest strikers in the organization, has heard before about being at a power disadvantage. He remains unfazed.

“I feel like he poses a danger the same way all my past opponents pose dangerous threats,” he said. “They keep talking about, ‘Power, power, power.’ Have you ever heard that before when someone fights me? ‘Oh, power this. Power that.’ It’s the same old song. Get it off (expletive) repeat. Pick a new song. I’m just glad I have a new blood to fight in this fight. It’s time to eat.”