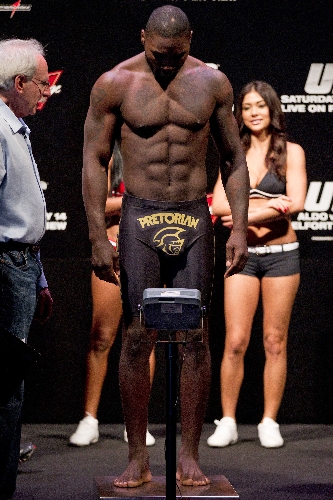 Even moving up a weight class couldn’t keep Anthony Johnson from missing the mark at weigh-ins for the third time in his Ultimate Fighting Championship career.

The latest slip-up cost him his job.

Johnson was released from the organization following a weigh-in debacle Friday and a first-round submission loss to Vitor Belfort on Saturday at UFC 142 in Rio de Janeiro.

Having twice missed weight badly as a welterweight (170 pounds), Johnson finally decided to move up to the 185-pound middleweight division for this fight. He still had issues making the cut. Johnson reportedly got down to 187.5 pounds, 1.5 more than the allowable limit for a nontitle bout, but was told by medical personnel it would be unsafe to cut any more weight.

He rehydrated before weigh-ins and tipped the scales at an embarrassing 197. Belfort, who received 20 percent of Johnson’s purse as a result, agreed to go through with the fight only if Johnson weighed no more than 205 the afternoon of the fight.

UFC president Dana White told MMAJunkie.com in Brazil after Johnson’s loss that even a win wouldn’t have saved him from the chopping block.

“This is the worst weight-cutting disaster he’s ever had. Almost ruins the co-main event here in Brazil,” White said at the post-fight news conference, according to USA Today. “The question everybody wants to know is, ‘Is he gone?’ Yes, he is. Three strikes and you’re out.”

■ FLORIAN TO THE BOOTH — Kenny Florian has not officially decided whether he is going to retire from mixed martial arts, but he has already headed in the direction that many well-spoken and intelligent former athletes go when their careers as active competitors end.

Florian was named the color commentator for the second-unit broadcast team and will debut with play-by-play man Jon Anik at the UFC on FX 1 event Friday night.

Florian, 35, has challenged for UFC titles three times without winning a belt. He recently said a back injury he suffered lifting weights in November might force him to retire.

While not fully committed to that decision, he will be able to continue making a living in the UFC with the new gig that will see him calling cards mostly on FX and Fuel, two properties of Fox that became the new homes for cable events as part of the UFC’s deal with the network.

It will not be the first time behind the microphone for Florian, who co-hosted “MMA Live” with Anik on ESPN and now sits in one of the anchor chairs on the weekly Fuel show, “UFC Tonight.”

He also has filled in on occasional broadcasts when lead color commentator Joe Rogan was unavailable.

Florian’s first new assignment is Friday’s card in Nashville, Tenn., which airs live at 6 p.m. on FX (Cable 24) and features a main event lightweight bout between Melvin Guillard and Jim Miller. The entire preliminary card will be shown live on Fuel (Cable 319), beginning at 3.

■ SILVA DQ TO BE REVIEWED — Video of a controversial disqualification loss by Erick Silva on Saturday’s UFC 142 card in Rio de Janeiro will be examined by UFC officials to determine the validity of the result.

Silva thought he had knocked out Carlo Prater just 29 seconds into their welterweight bout, but his excitement was short-lived after learning he’d been disqualified by referee Mario Yamasaki for landing illegal blows to the back of the head that contributed to the knockout.

There is no formal appeals process in place, as there might be for an athletic commission, but Silva’s team made it known they disagree with the outcome, and the decision will be reviewed.