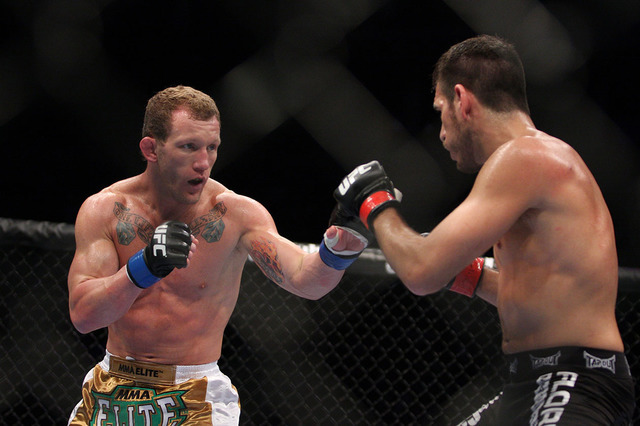 Gray Maynard, left, in action against Kenny Florian during their UFC fight at the TD Garden on Saturday, August 28, 2010 in Boston, MA. Maynard won via unanimous decision. (Gregory Payan/AP)

A pair of former contestants on “The Ultimate Fighter” have been booked to fight on the show’s Season 24 finale card at the Palms on Dec. 3.

Gray Maynard, who competed on Season 5, will remain at featherweight in search of his second consecutive win when he fights Season 22 champion Ryan Hall, sources close to the UFC confirmed to the Review-Journal.

Maynard, a three-time All-American wrestler at Michigan State, won his debut at 145 pounds in July with a unanimous decision victory over Fernando Bruno. His drop to featherweight was prompted by four straight losses at lightweight.

The 37-year-old Las Vegan had two shots at the 155-pound title in 2011, fighting then-champion Frankie Edgar to a draw before losing the rematch.

It will mark the first bout for Hall after beating Artem Lobov to win Season 22 of the reality show in December. The highly-decorated grappler competed on the show as a lightweight.

The fight will be part of a card scheduled to be headlined by the winner of the tournament challenging UFC champion Demetrious Johnson for the flyweight title.

The tournament was taped in Las Vegas with episodes currently airing Wednesday nights on Fox Sports 1.

Top flyweight contenders Henry Cejudo and Joseph Benavidez, who are serving as coaches on the show, will also fight on the card, which will air on the same network.