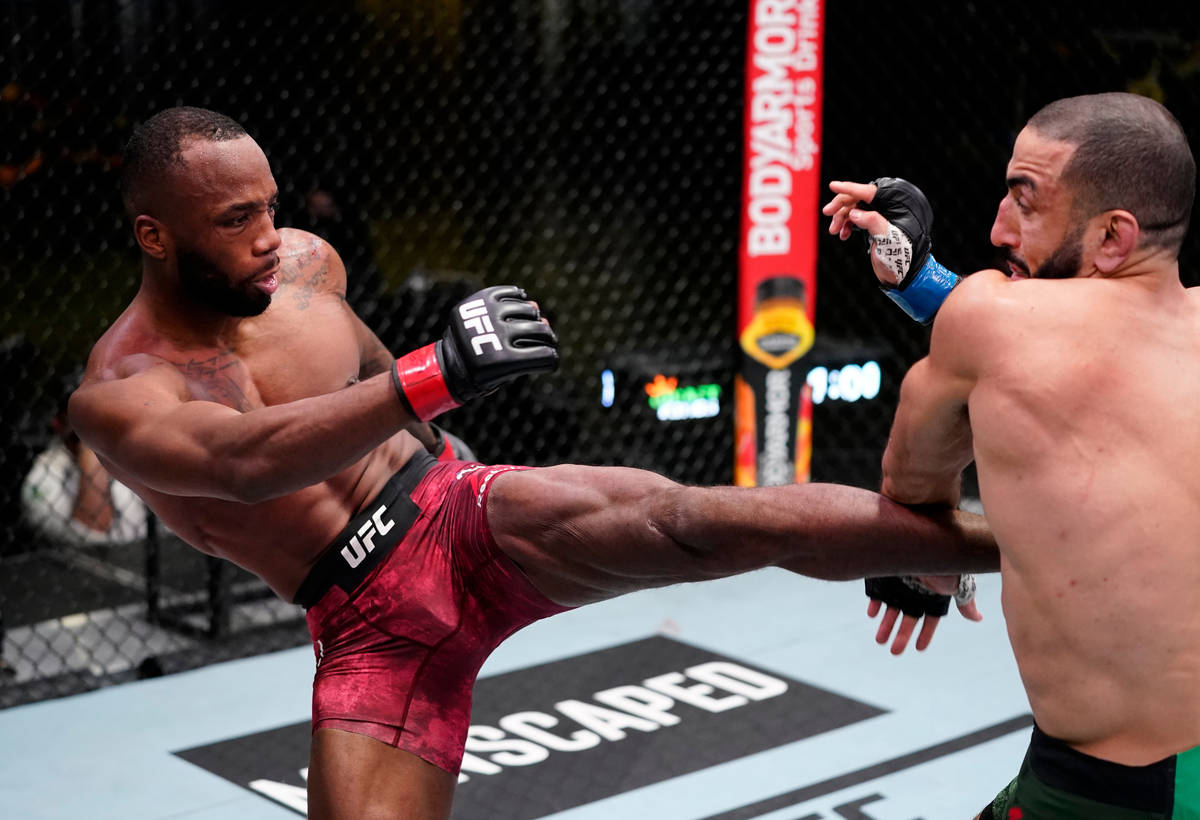 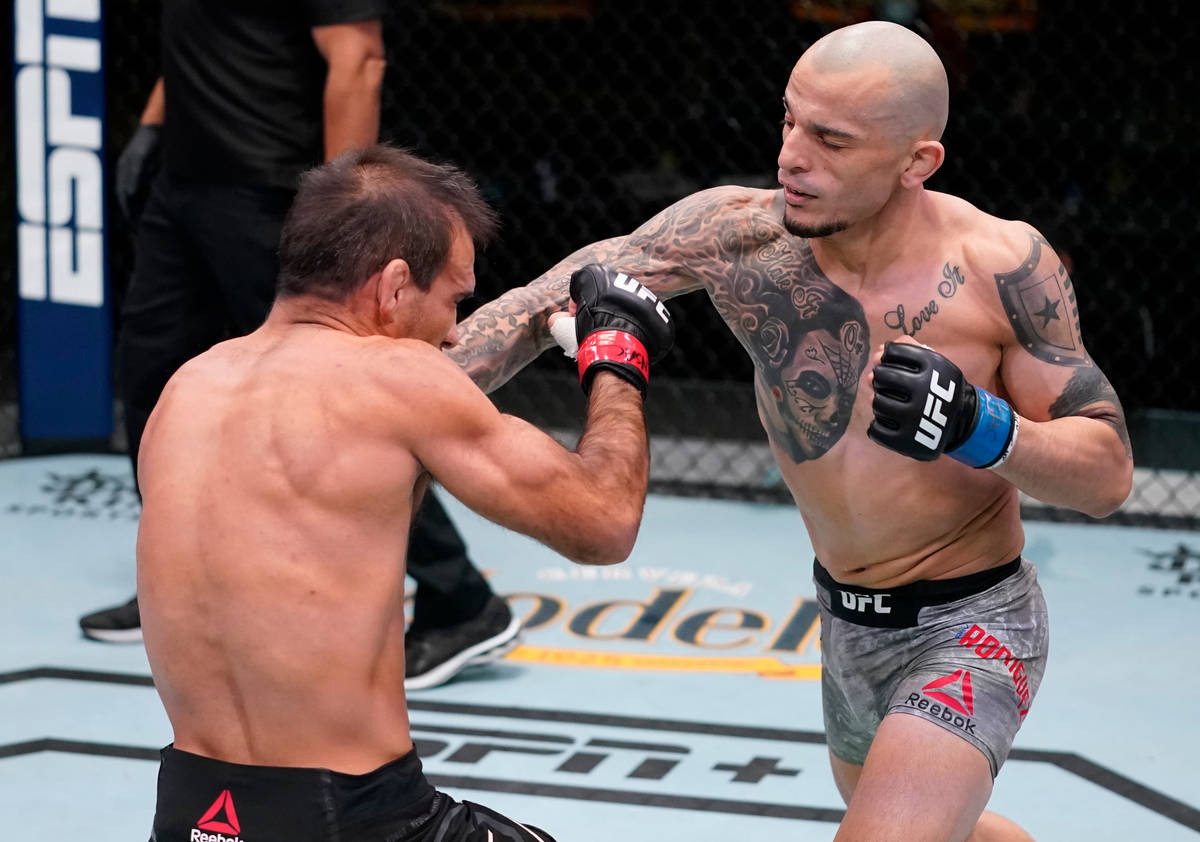 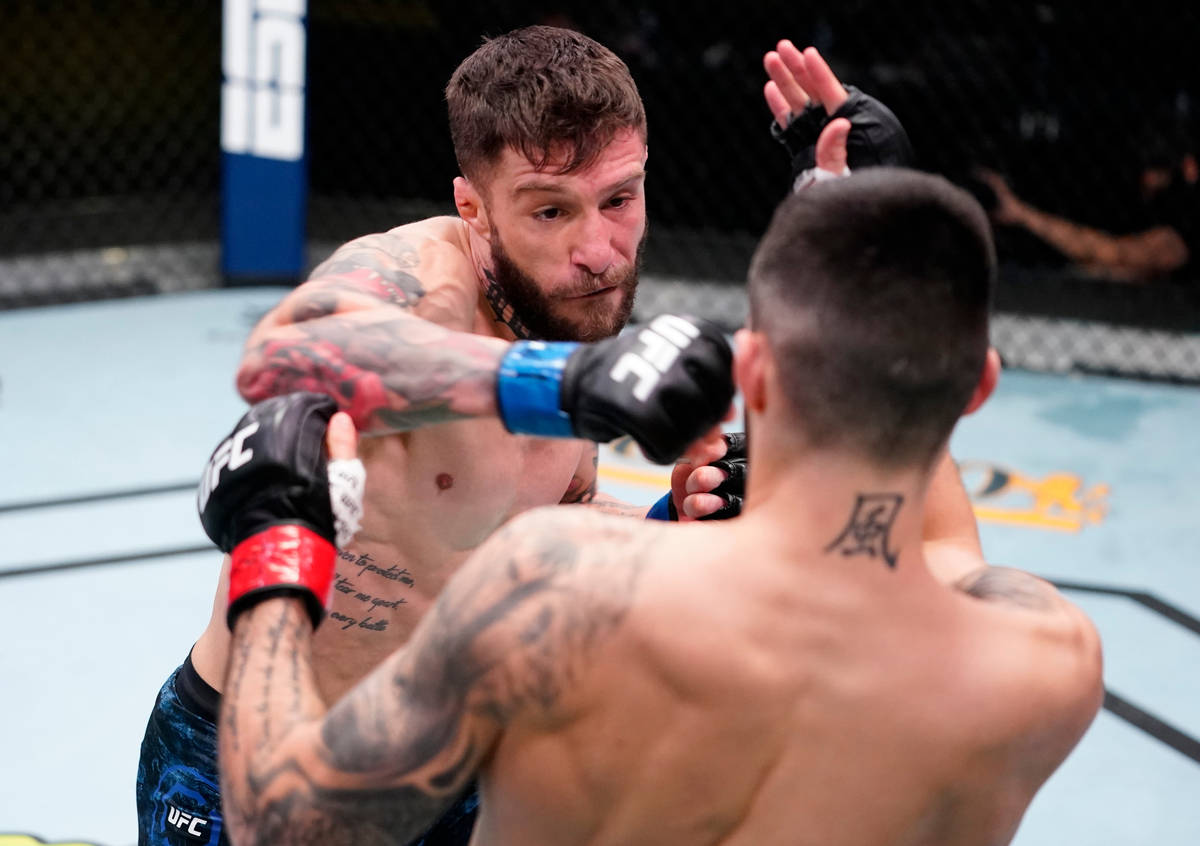 Marcelo Rojo of Argentina punches Charles Jourdain of Canada in a featherweight fight during the UFC Fight Night event at UFC APEX on March 13, 2021 in Las Vegas, Nevada. (Photo by Jeff Bottari/Zuffa LLC via Getty Images) 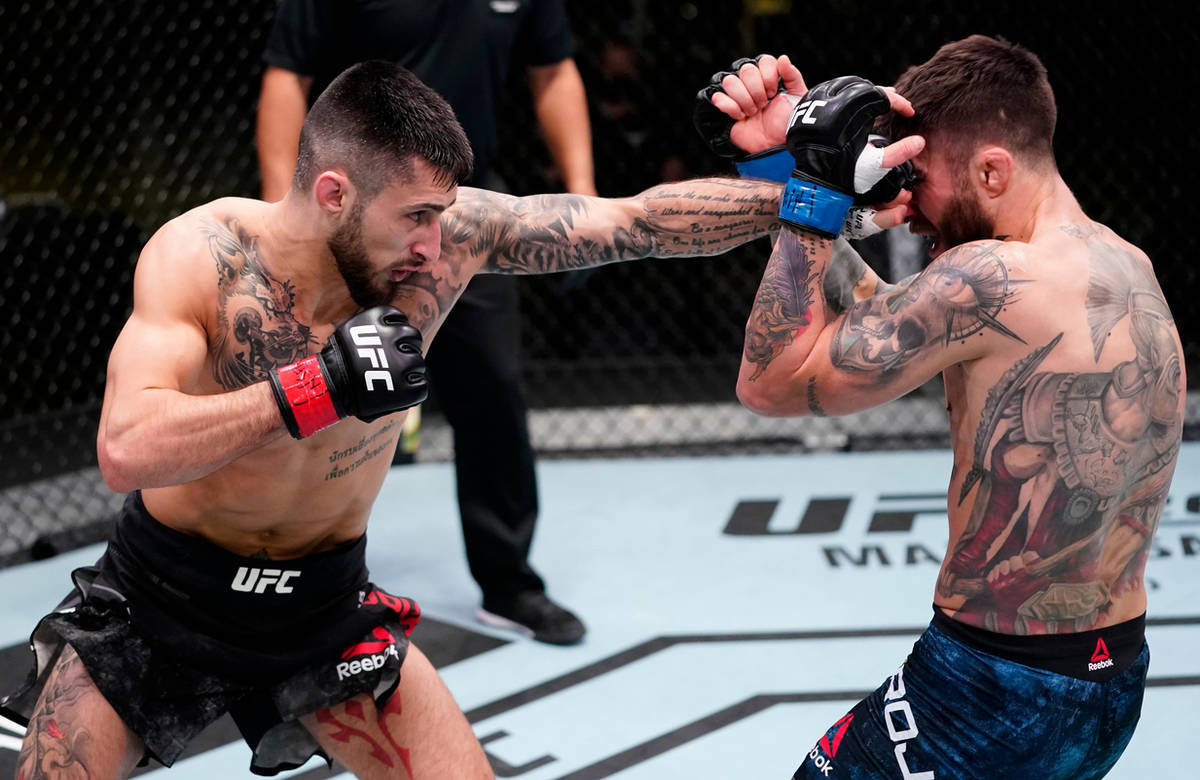 Charles Jourdain of Canada punches Marcelo Rojo of Argentina in a featherweight fight during the UFC Fight Night event at UFC APEX on March 13, 2021 in Las Vegas, Nevada. (Photo by Jeff Bottari/Zuffa LLC via Getty Images) 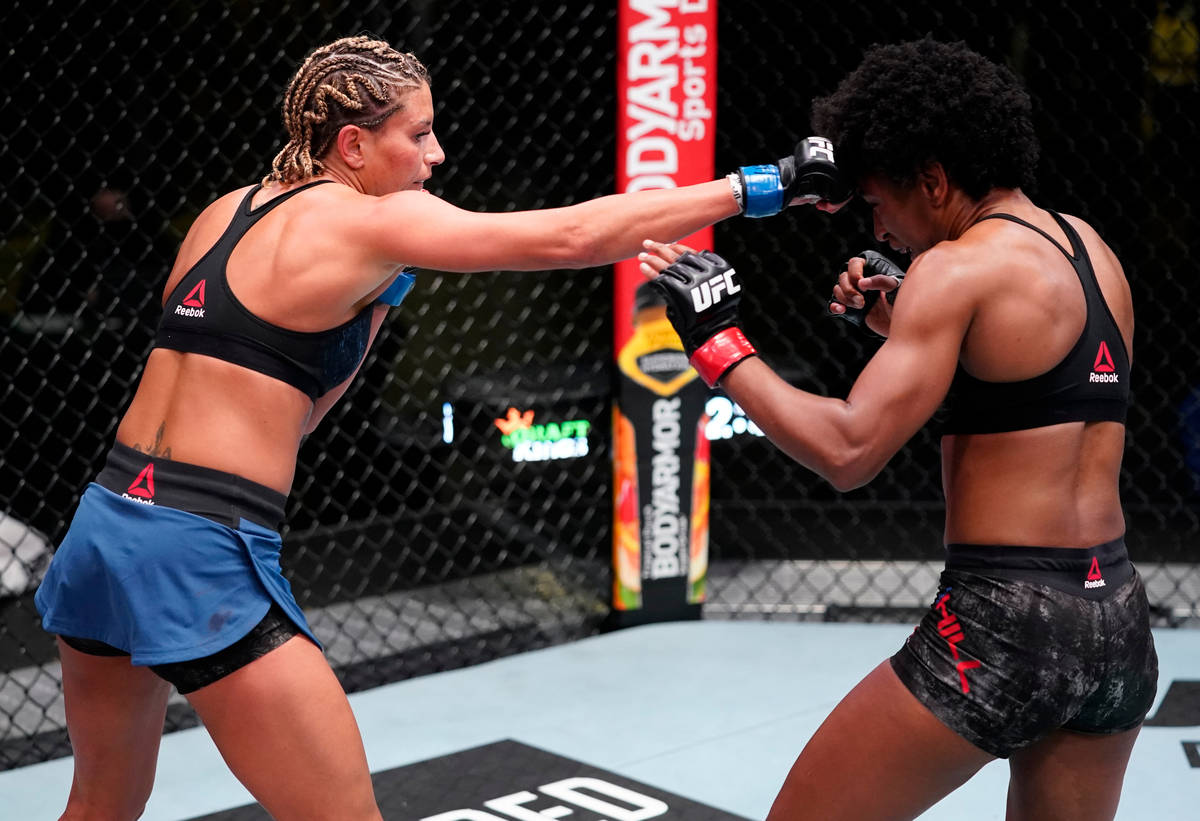 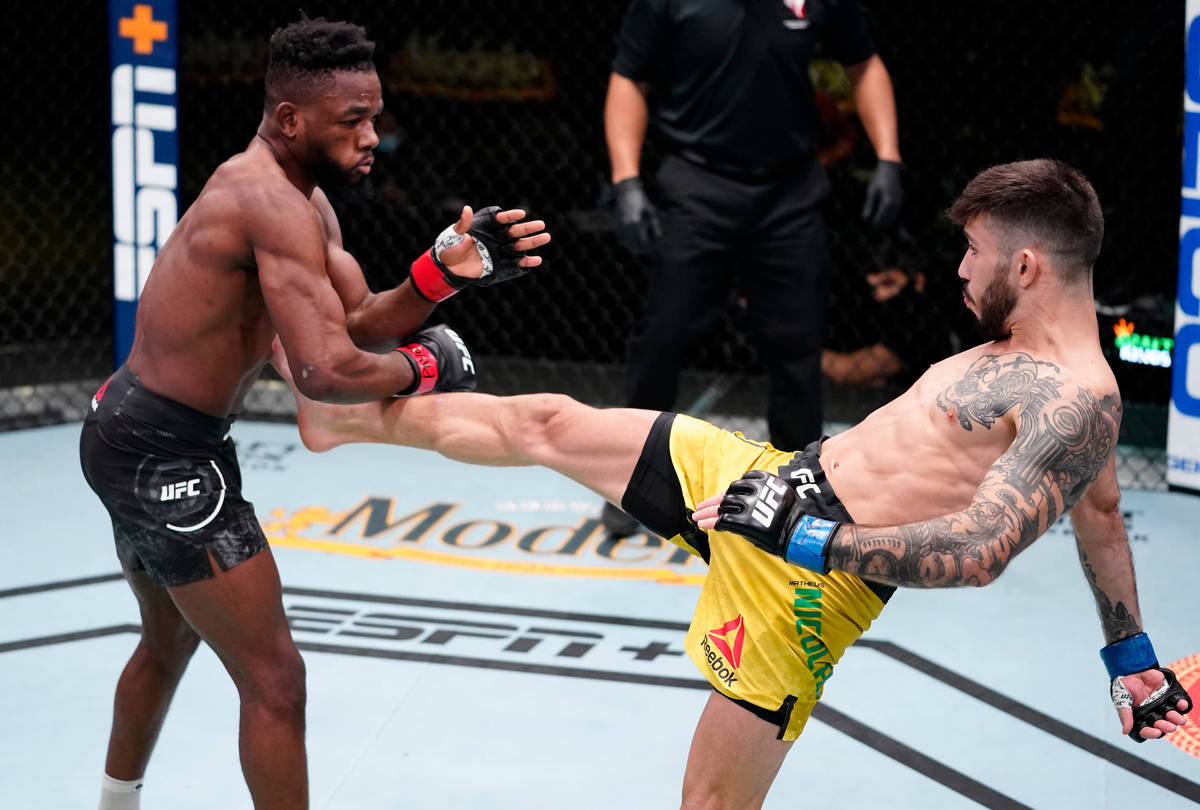 Matheus Nicolau of Brazil kicks Manel Kape of Angola in a flyweight fight during the UFC Fight Night event at UFC APEX on March 13, 2021 in Las Vegas, Nevada. (Photo by Jeff Bottari/Zuffa LLC via Getty Images) 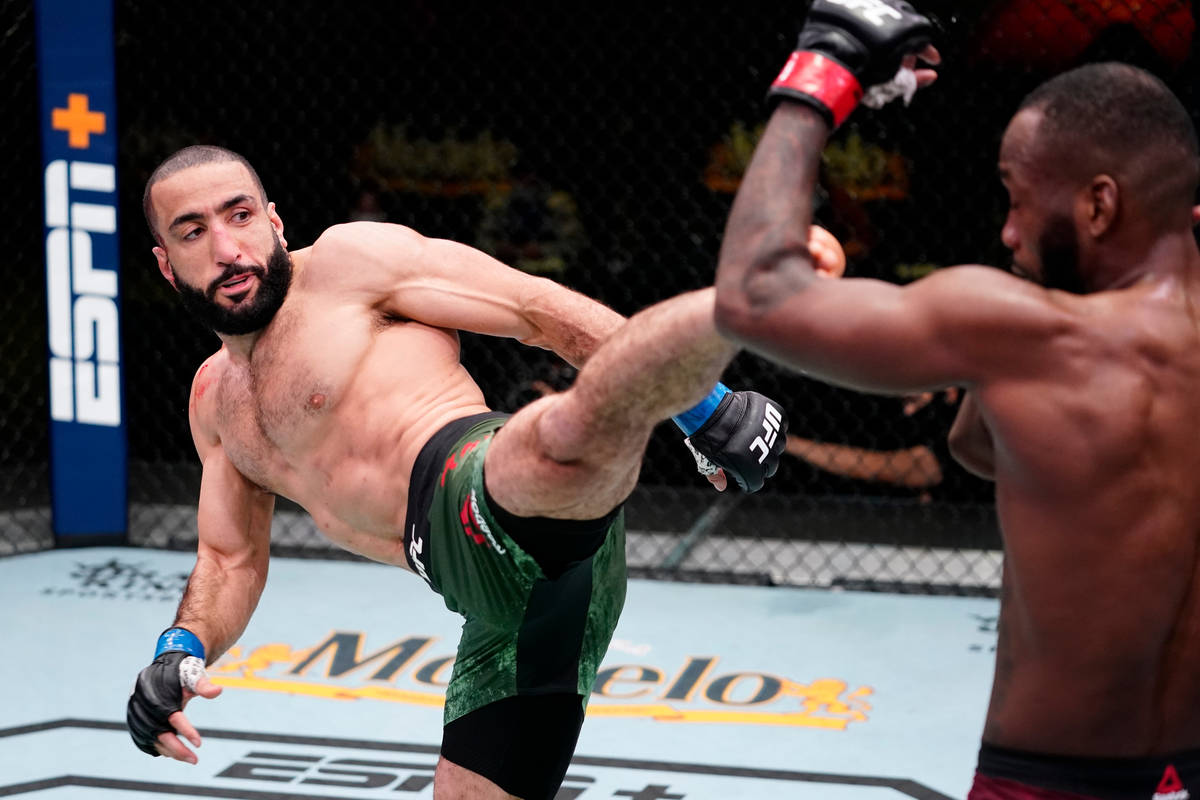 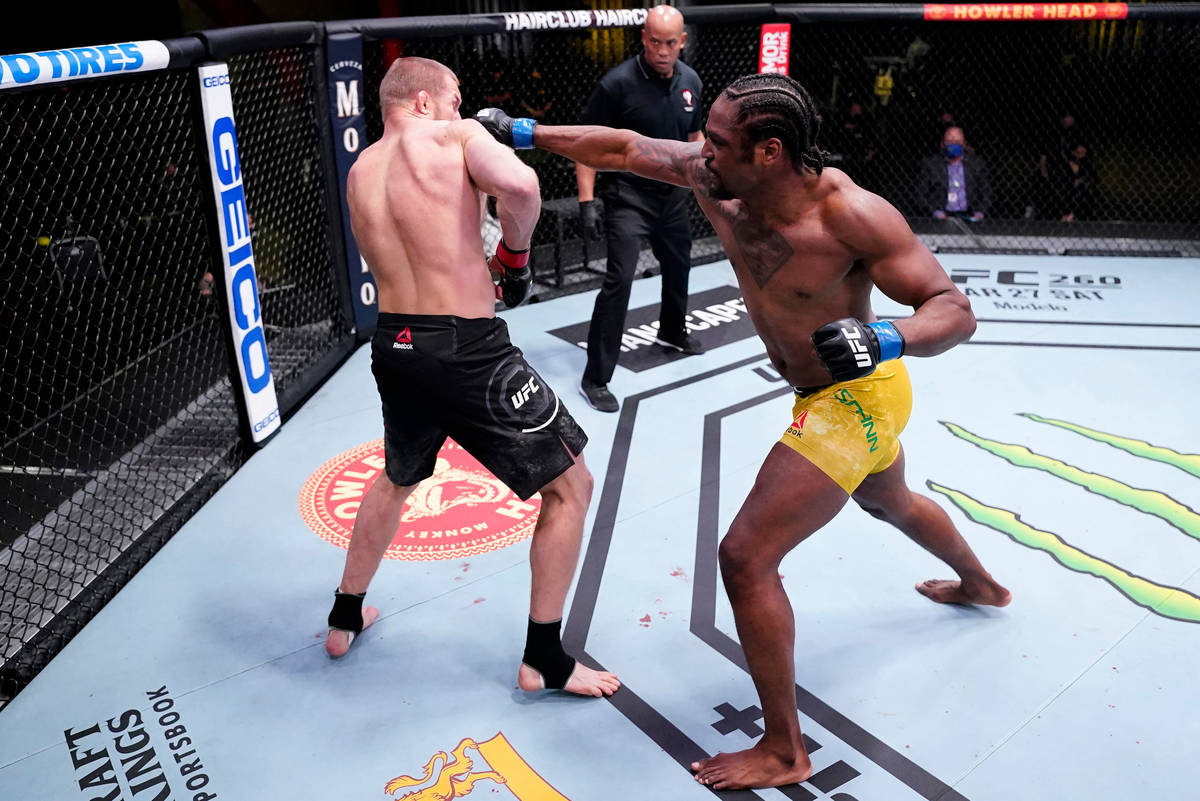 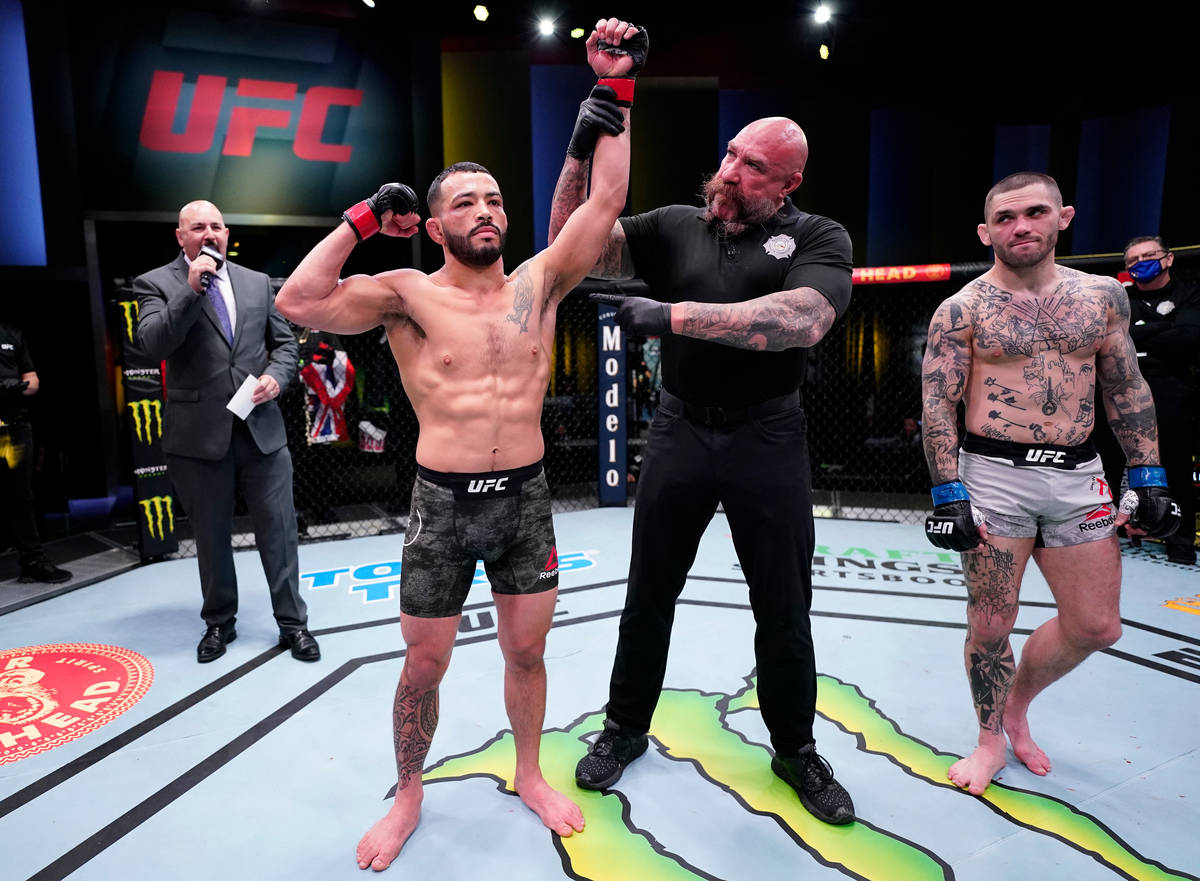 Dan Ige reacts after his knockout victory over Gavin Tucker of Canada in a featherweight fight during the UFC Fight Night event at UFC APEX on March 13, 2021 in Las Vegas, Nevada. (Photo by Jeff Bottari/Zuffa LLC via Getty Images)

UFC welterweight contender Leon Edwards waited more than 19 months to step back in the cage and put his winning streak on the line.

He’ll have to wait a bit longer to get a result.

Edwards’ finger got in the eye of Belal Muhuammad early in the second round of their UFC Fight Night 187 main event bout at the Apex, resulting in a no-contest when Muhammad’s eye immediately swelled shut.

“First of all, I apologize,” Edwards said. “I didn’t mean to do it. I went for the cross headkick and he stepped into it. I really apologize.

“I’d rather take a loss than that. I’m heartbroken. I don’t know what to say.”

Edwards had won eight straight entering the fight, but has spent more than a year caught in limbo as a top contender in a complicated division. Unable to secure a title fight, Edwards took a fight against former champion Tyron Woodley in March only to be forced to withdraw due to COVID-19 travel restrictions.

He then agreed to fight phenom Khamzat Chimaev, but that fight was canceled three times because both fighters battled coronavirus. Chimaev has suffered from lingering effects of the illness.

Muhammad agreed to step in for Chimaev on Saturday and appeared to be in trouble in the first round after Edwards landed a head kick. He made it through the round to set up the anti-climactic conclusion just 18 seconds into the second.

“What do I do now?” Edwards asked. “I went in there focused on my next chapter to be a world champion. I waited a long year and a half to come back to that.

“I wanted to show more.”

In another bout, light heavyweight Ryan Spann won for the ninth time in 10 fights with a first-round knockout of Misha Cirkunov.

Spann dropped Cirkunov with a right hand in the opening minute, but his follow-up shots failed to stop the fight. Once Cirkunov regained his footing, Spann dropped him again with a left and forced the referee to step in with a series of hammerfists.

Las Vegan Dan Ige bounced back from his first loss since 2018 by making quick work of featherweight Gavin Tucker.

Ige showed no lingering effects of having his six-fight winning streak and hopes for a title bout derailed by a unanimous-decision loss to Calvin Kattar in July, timing a right hand just as Tucker tried to close the distance and ending the fight with one shot.

“I gotta see the highlight,” said Ige, whose wife is 36 weeks pregnant with the couple’s first child. “I don’t even know what happened. I blacked out. Boom goes the dynamite. I’m so happy to be here. A first round (knockout is) nice. Can’t beat that.”

Also on the main card, former Alabama linebacker Eryk Anders was in control of his fight with middleweight Darren Stewart late in the first round when he landed an illegal knee reminiscent of last week’s bantamweight title blunder by Petr Yan. The fight was ruled a no contest

Women’s strawweight contender Angela Hill left the judges with no doubts with a dominant performance over Ashley Yoder, winning all three rounds on all three cards. Hill had lost back-to-back fights by split decision.