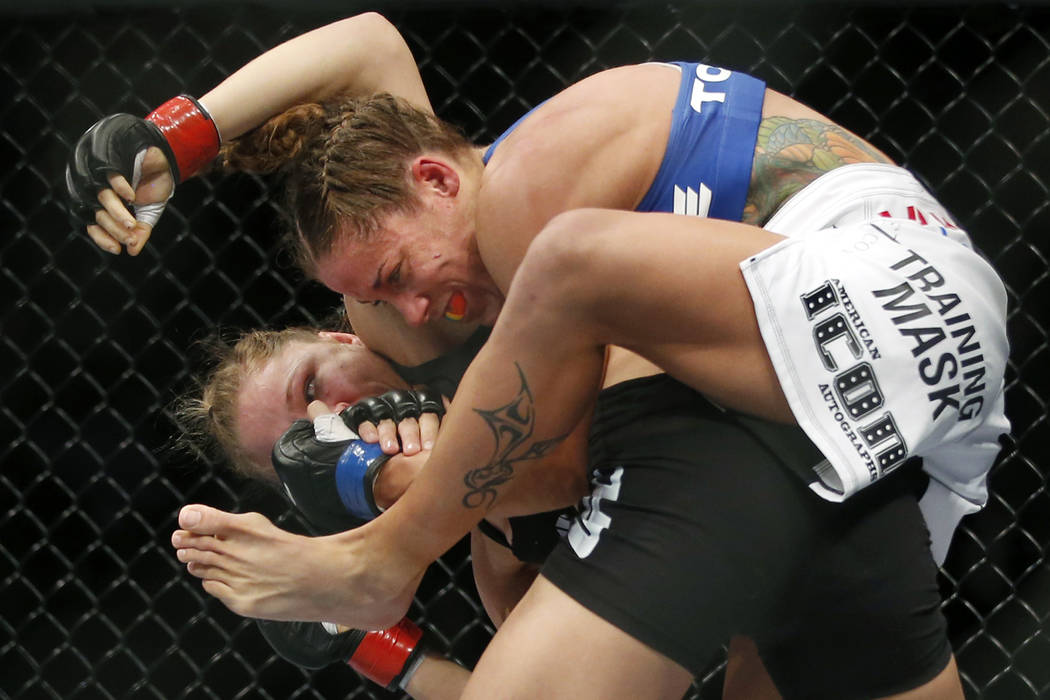 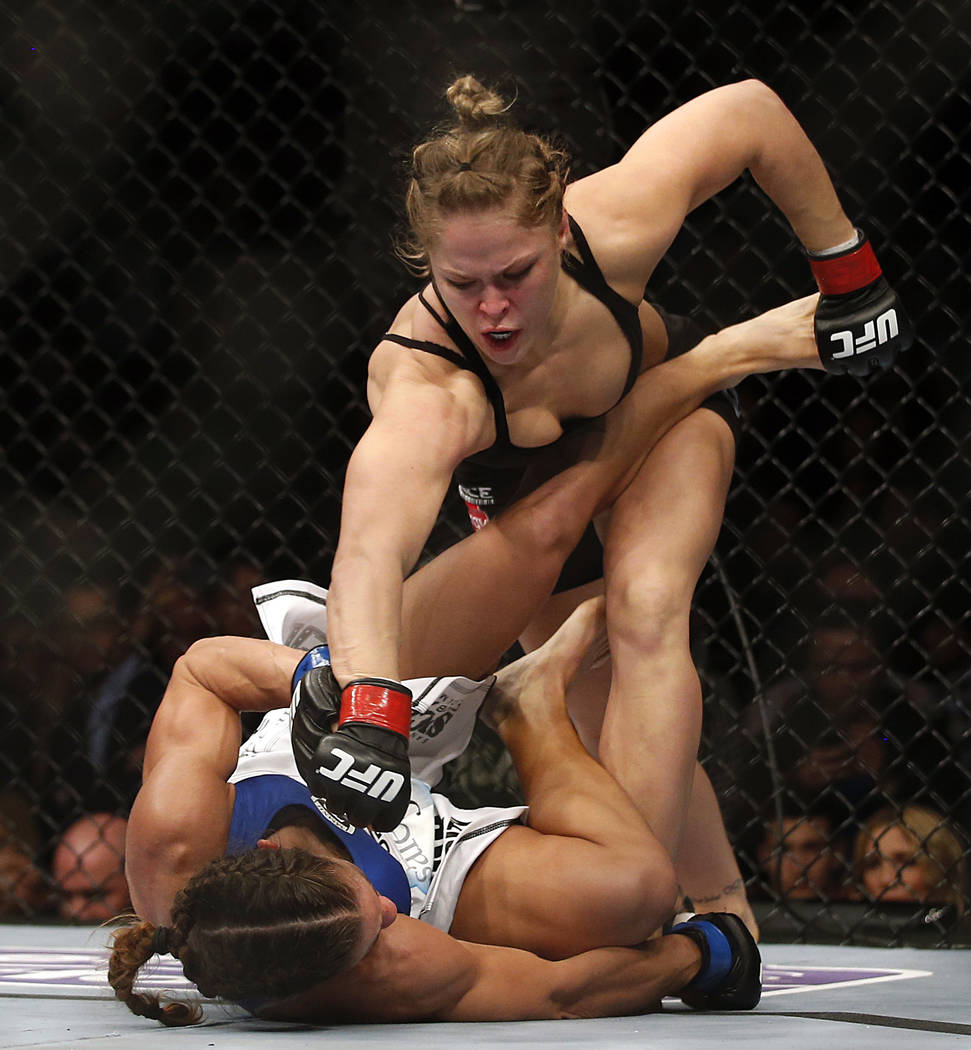 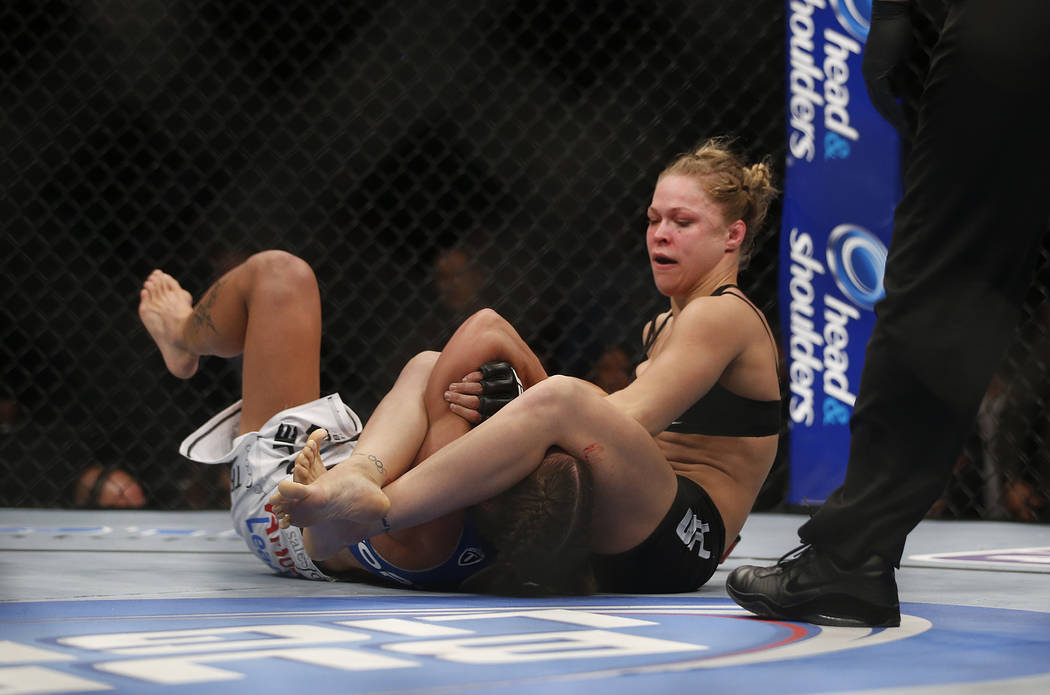 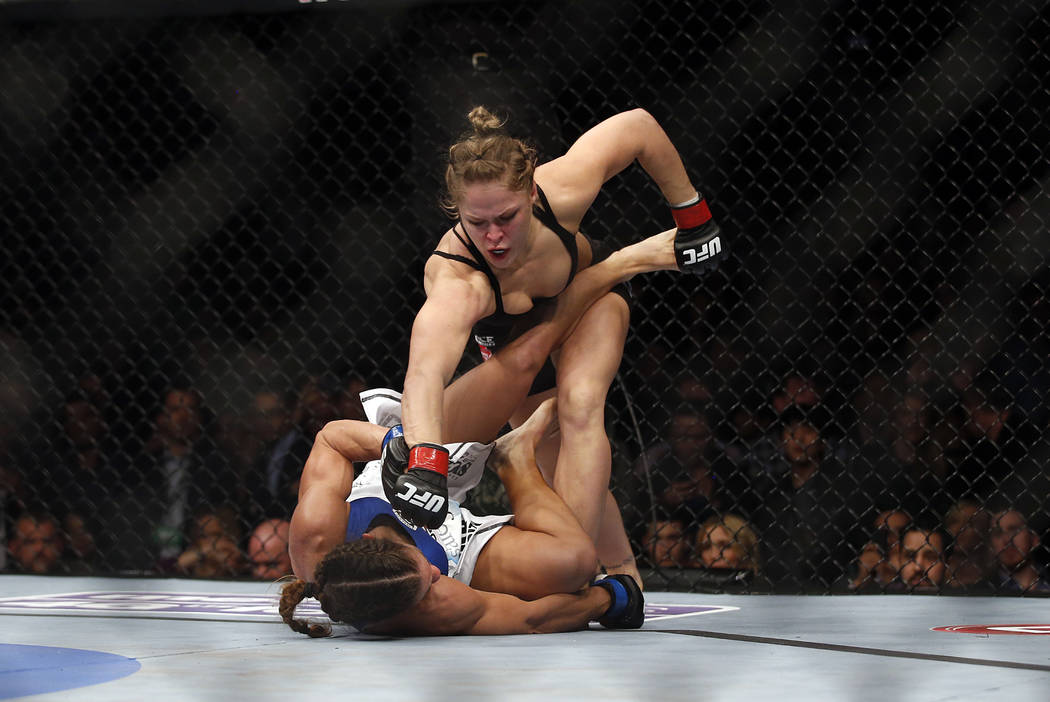 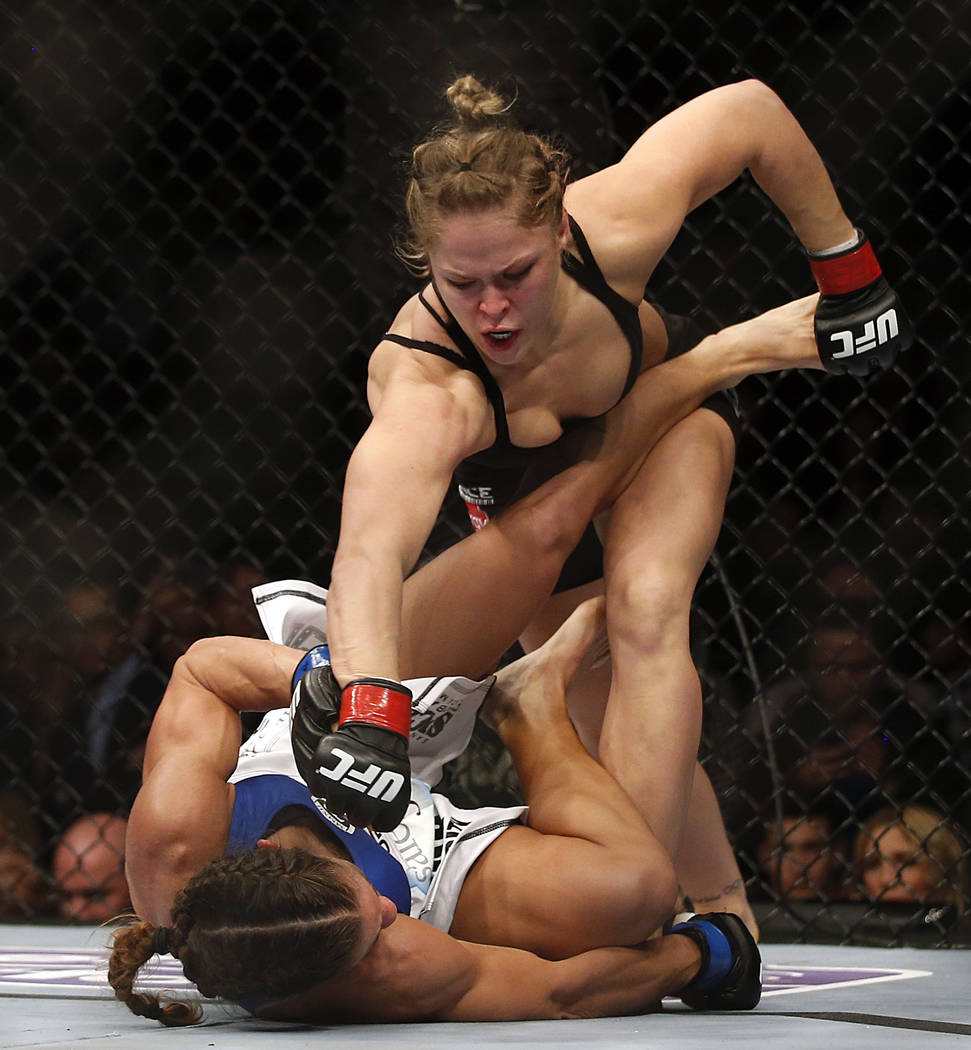 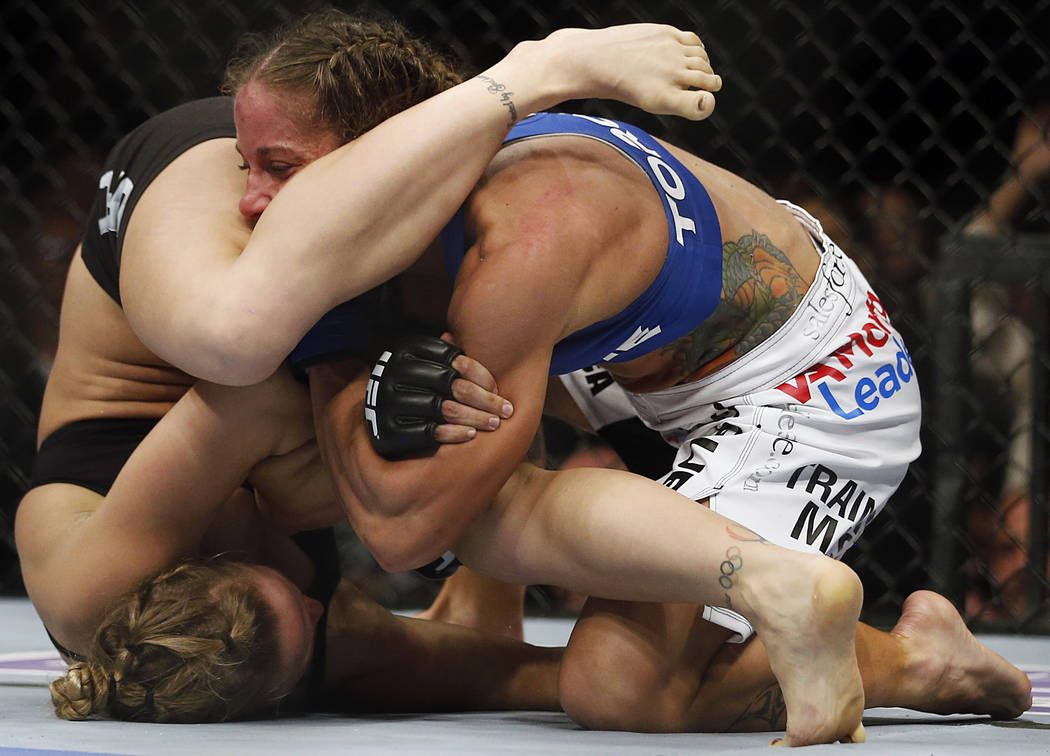 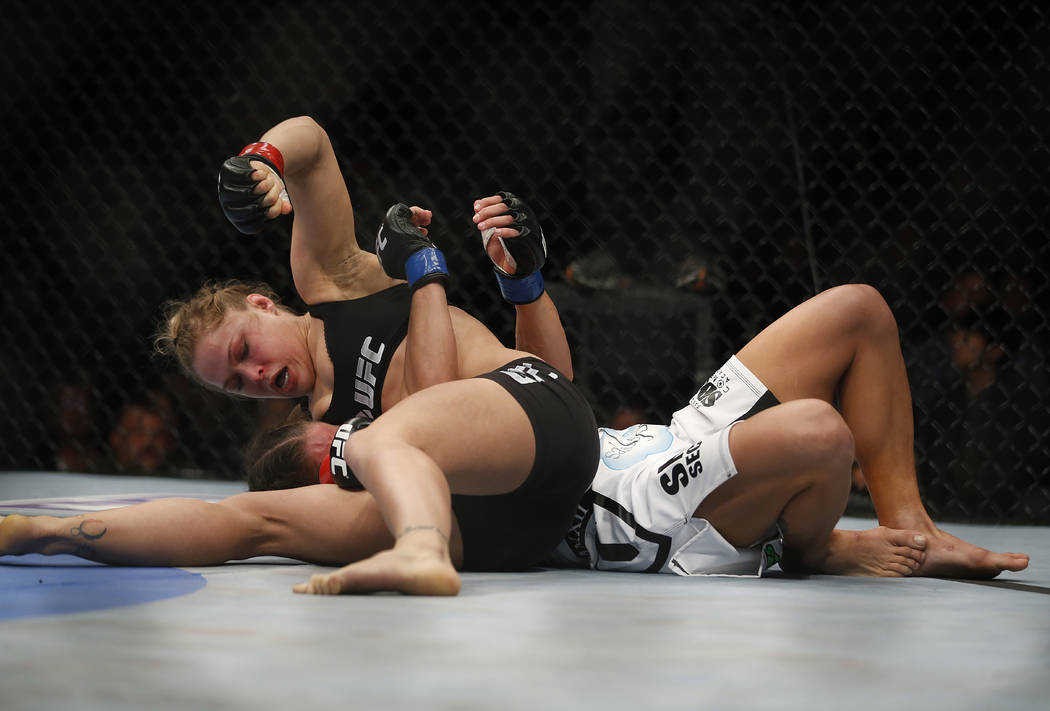 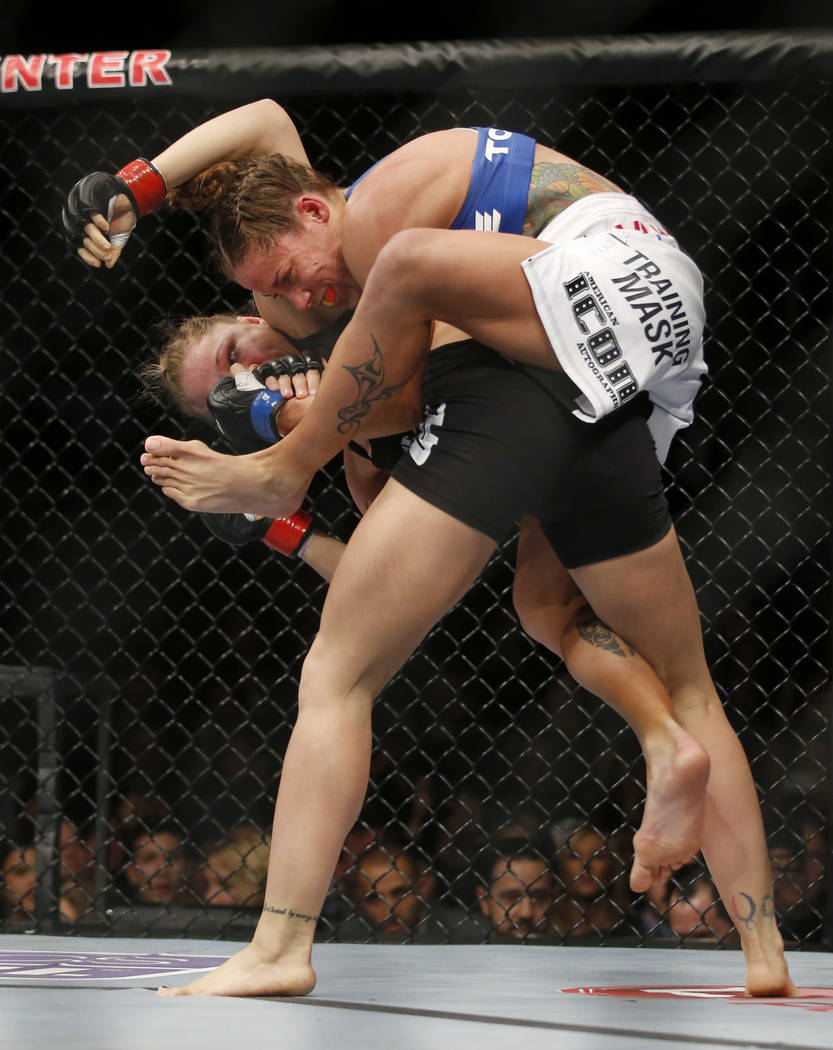 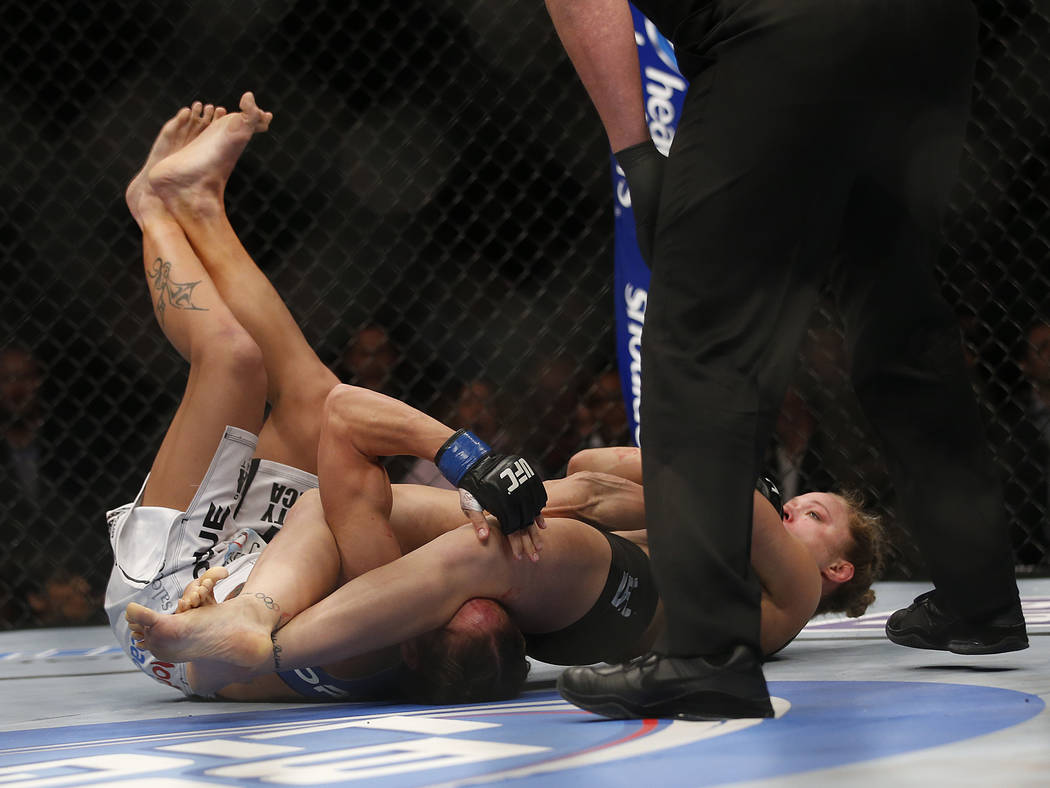 Liz Carmouche, left, taps out as Ronda Rousey pulls an armbar on her during their UFC 157 women's bantamweight championship mixed martial arts match in Anaheim, Calif., Saturday, Feb. 23, 2013. Rousey won the first womens bout in UFC history, forcing Carmouche to tap out in the first round. (AP Photo/Jae C. Hong)

Liz Carmouche has victories over two current UFC champions and yet still is most known for a high-profile loss.

She can start to turn that perception around Saturday should she replicate her 2010 win over current UFC women’s flyweight champion Valentina Shevchenko in the main event of UFC Fight Night 156 in Montevideo, Uruguay.

The odds are stacked against Carmouche, a plus 700 underdog, despite her second-round technical knockout of Shevchenko in their first fight.

At least she knows who she’s fighting this time.

She had been fighting for less than a year as a pro when a promoter offered her $200 to fight Shevchenko on a card in rural Oklahoma. Carmouche’s manager declined because of Shevchenko’s world-class experience as a Muay Thai fighter, then accepted when he was guaranteed that it would be Shevchenko’s younger sister Antonina fighting.

Carmouche arrived to discover that she would be fighting Valentina and agreed to the bout against her manager’s advice.

She cut Shevchenko open with an upkick that ended the fight in the second round. But because it was nine years ago, Carmouche doesn’t think it means much as Shevchenko has established herself as an MMA star.

“I was so green, so new to fighting and so inexperienced,” Carmouche said. “This to me is a clean slate.”

Carmouche is no stranger to the big stage. She was the opponent selected to play the B side for Ronda Rousey’s UFC debut in 2013 and almost changed the course of history for female fighting when she came close to locking in a submission in the first round before succumbing to a Rousey armbar.

Now, Carmouche, who also has a victory over strawweight champion Jessica Andrade, gets another chance to win a UFC belt.

“I love being the underdog,” said the 35-year-old former Marine, who has won four of her past five fights. “That means the climb to the top is that much sweeter.”

The main card, which also features a welterweight bout between Mike Perry and Vicente Luque, will stream on ESPN Plus at 5 p.m.

Edgar to drop to bantamweight

Frankie Edgar was once the UFC lightweight champion at 155 pounds before moving to 145, where he has spent the past six years as a perennial contender for the belt.

The 37-year-old Edgar, who fell to 0-3 in featherweight title fights with a unanimous decision loss to champion Max Holloway last month, will make a run at the bantamweight belt.

His manager, Ali Abdelaziz, made the announcement during an appearance on ESPN this week.

Abdelaziz indicated that Edgar hopes to make his 135-pound debut at UFC 244 on Nov. 2 at Madison Square Garden in New York.

Conor McGregor, the former UFC featherweight and lightweight champion, was No. 5 on Hookit’s list of most valuable athletes on social media published by Forbes, the only nonsoccer player in the top seven.

The report gauges which athletes had the highest number of interactions and engagements on their social media accounts for the first half of 2019.