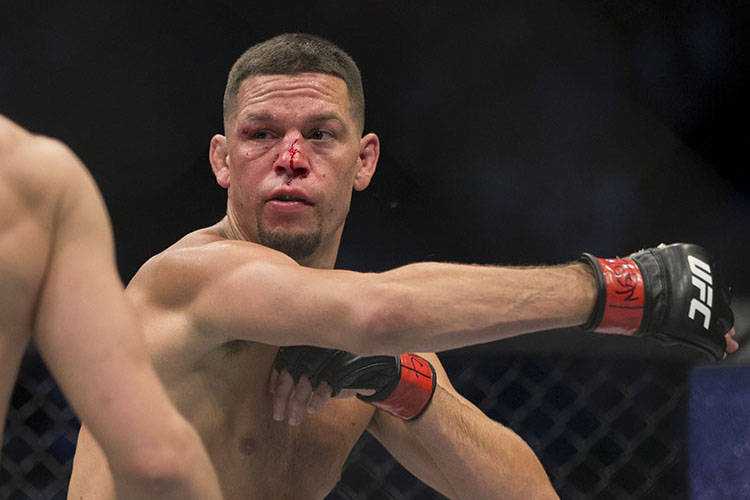 The fight between Nate Diaz, shown in an Aug. 20, 2016, file photo, and Jorge Masvidal will go on as scheduled as the main event of UFC 244 at Madison Square Garden on Nov. 2. (Erik Verduzco/Las Vegas Review-Journal) Follow @Erik_Verduzco

A fight between Nate Diaz and Jorge Masvidal will go on as scheduled as the main event of UFC 244 at Madison Square Garden on Nov. 2, the organization said late Friday.

On Thursday, Diaz said on Twitter he would not compete after he was informed of an adverse finding in a prefight drug test.

“I’m not gonna make it out to NYC for fight week next week because they say I tested with elevated levels that they say might be from some tainted supplements,” Diaz wrote.

The U.S. Anti-Doping Agency indicated a test submitted by Diaz showed the presence of LGD-4033. According to a statement, additional testing on two bottles of an organic, vegan, multi-vitamin used by Diaz were contaminated with the substance.

The agency ruled Diaz had not committed a violation of the anti-doping policy and is not subject to any sanctions. The UFC was also informed there is “unequivocally no appreciable performance enhancing or therapeutic benefit form the significantly limited amount” of LGD-4033 present in his system, which was roughly 10,000 times lower than one therapeutic dose.

As part of Friday’s announcement, the UFC indicated changes will be coming to the drug-testing program.

Masvidal had said earlier Friday he believed Diaz was clean.

“There was never a thought in my mind that Nate would cheat,” White told the Review-Journal late Friday. “And I never doubted for a second that this fight (was) going to happen. The team did a great job looking into this and I’ll see you guys in New York next Saturday.”

According to the UFC’s announcement Friday, the organization has been working with USADA since August to put the new procedures in place. The Diaz situation clearly moved up the timeline.

“UFC is an industry-leader in anti-doping and we continuously strive and advocate for an effective and fair program for our sport and athletes,” the statement read.

The revised anti-doping policy will be made publicly available upon completion of the revised guidelines.

Askren looks to bounce back

Welterweight contender Ben Askren suffered the first loss of his career in July when he was knocked out by Masvidal in just five seconds at T-Mobile Arena.

Askren wants to show he has moved on from the defeat.

He has a chance to prove it when he faces Demian Maia in the main event of UFC Fight Night 162 on Saturday in Singapore.

“I think the worst thing that could happen is an extended (expletive)-kicking where you get your (expletive) kicked for 15 minutes; that would be terrible,” he told UFC.com this week. “Obviously, that isn’t what happened — he hit me with one shot — and part of me wishes I had more of an opportunity to try to do something. But at the same time, it’s just, ‘Hey, that happened and there is nothing I can do.’ It’s done, so I might as well move on.”

Askren said it helped to not hide from what happened. He attended his after-party in Las Vegas and returned to Twitter with a simple message the following day.

“Well that sucked,” he wrote.

The 35-year-old Askren, who entered that fight 19-0, had no experience dealing with a professional loss.

The card, which also includes a lightweight bout between Michael Johnson and Stevie Ray, will stream live on ESPN-Plus at 5 a.m.

The former two-division champion walked himself to the hospital after feeling discomfort following a workout at Unbreakable MMA Gym and underwent surgery.

“Contrary to recent rumors, I have not kicked the bucket yet,” Couture said in a statement from his management team. “I am alive and well. Special thanks to the amazing staff at Cedars Sinai Hospital. From the ER to cardiac ICU thanks for taking care of me.

“Thanks to all of you out there expressing your concern. Your love and support mean the world to me and my family. Live your lives to the fullest. You never know when you’ll draw that last breath in!”

Couture, 56, has found success as an actor and sports executive since retiring in 2011.

Former NFL star Greg Hardy’s decision victory on the UFC on ESPN 6 card in Boston last week was changed to a no-contest after the Massachusetts State Athletic Commission ruled he illegally used an inhaler between rounds.

He said Thursday he plans to appeal.

Hardy has said the inhaler was approved by USADA and a commission representative appeared to give him the green light when Hardy asked from his stool, but the commission had not cleared it.

For now, Hardy has a disqualification, a no-contest and two first-round knockout wins since making his UFC debut in January.

He has agreed to step in on short notice to face Alexander Volkov on the UFC Fight Night 163 card in Moscow on Nov. 9.