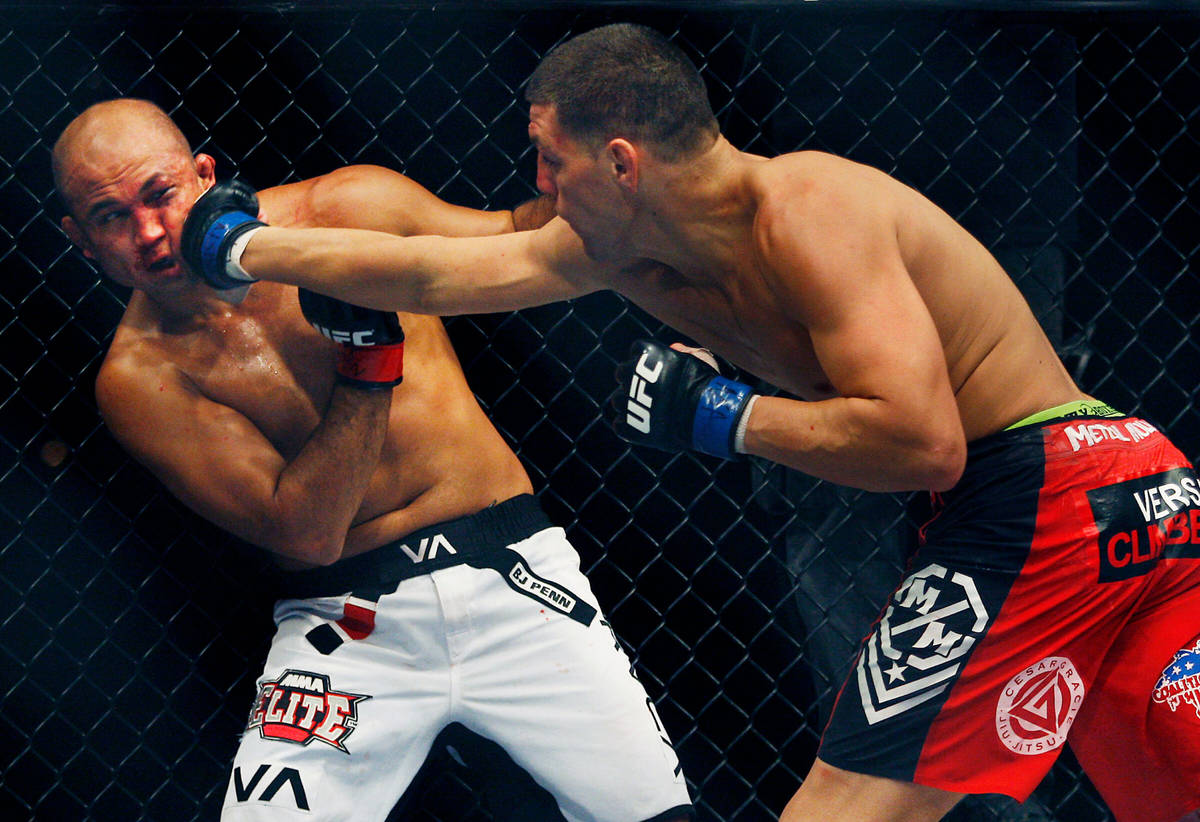 Nick Diaz, right, lands a right hand to the face of BJ Penn during the main event at UFC 137 at the Mandalay Bay Events Center in Las Vegas on Oct. 29, 2011. Diaz won by unanimous decision. (Las Vegas Review-Journal file photo)

Nick Diaz will come out of retirement and make his return to the UFC on Sept. 25 at T-Mobile Arena, people familiar with the event confirmed to the Review-Journal.

Diaz will fight welterweight Robbie Lawler 17 years after their first meeting on a UFC 266 card that will include two title fights.

Alexander Volkanovski will defend his featherweight title against Brian Ortega, and Lauren Murphy will challenge Valentina Shevchenko for the women’s flyweight belt.

Diaz, who turns 38 on Aug. 2, figures to be the biggest story on the card. He hasn’t fought since 2015 and hasn’t won a bout since 2011, yet remains one of the UFC’s most popular fighters.

Diaz knocked out Lawler in the second round of a memorable 2004 bout at UFC 47. Diaz went on to win the Strikeforce title, and Lawler eventually became UFC champion.

The last time Diaz fought, he lost a decision to Anderson Silva that was ruled a no-contest when both fighters failed drug tests.

Diaz has tested positive for marijuana and been disciplined several times. The Nevada Athletic Commission voted last week to remove sanctions for marijuana.

Lawler, 39, has lost four straight, including by unanimous decision to Neil Magny in August.

The main event bout between Volkanovski and Ortega had been scheduled for March, but Volkanovski was hospitalized with COVID-19 and forced to withdraw from the fight. He has detailed his recovery from the illness and is ready to return to action.

Ortega’s only career defeat was in his first title bout when he lost by doctor stoppage after the fourth round of a wild brawl against Max Holloway.

The fighters are currently serving as opposing coaches on “The Ultimate Fighter.”

Shevchenko, a Las Vegas resident, is on a seven-fight win streak that includes five title defenses. She figures to be a massive favorite against Murphy, who has won five straight and earned the title shot with a split decision over contender Joanne Calderwood of Las Vegas in June.