But Serra was a huge underdog because, other than his jiu-jitsu, St. Pierre appeared to have the edge in every other area.

Serra, though, outslugged St. Pierre, winning the title by knocking St. Pierre down with three right hands, then pummeling him on the ground until referee John McCarthy stopped the fight at 3:25 of the first round.

“Georges is the future of this sport by far, and this could have gone either way,” Serra said. “But this is possibly the greatest upset in UFC history.”

St. Pierre was a minus-1100 favorite at the MGM Grand sports book. Serra closed at plus-750.

Though the bout never went to the ground, Serra never had a problem. St. Pierre, who won the title by knocking out Matt Hughes in 2006, had no excuse.

“I was beaten by a better fighter than myself,” he said.

Sanchez didn’t want to go to the ground with Koscheck, the 2001 NCAA wrestling champion. The men traded punches and neither landed many, bringing boos from the crowd.

But because of the bad blood between them, Koscheck wasn’t at all bothered by the boos and exulted in victory.

In a bout that was a stark contrast to Koscheck-Sanchez, lightweights Roger Huerta and Leonard Garcia engaged in one of the best bouts in UFC history.

But Huerta was the physically stronger fighter and spent much of the night on top of Garcia pounding him with hard shots to win a unanimous decision. 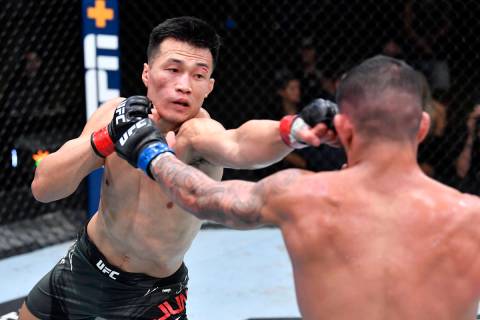