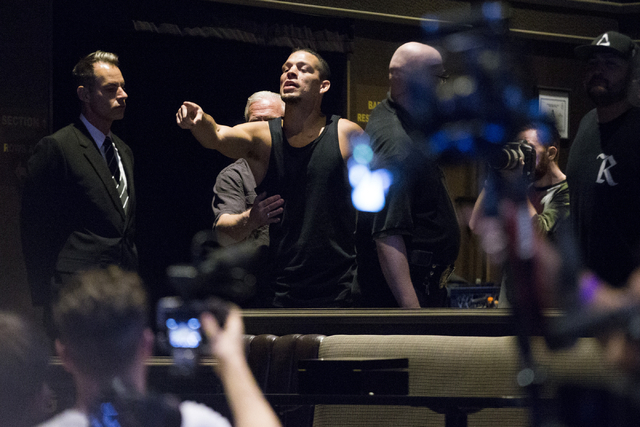 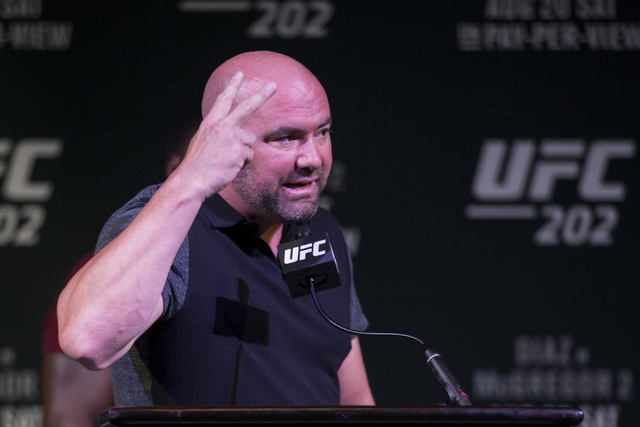 Dana White, president for UFC, ends the UFC 202 press conference early after Nate Diaz, his upcoming opponent Conor McGregor and their teams got into an altercation at the MGM Grand hotel-casino on Wednesday, Aug. 17, 2016, in Las Vegas. Erik Verduzco/Las Vegas Review-Journal Follow @Erik_Verduzco 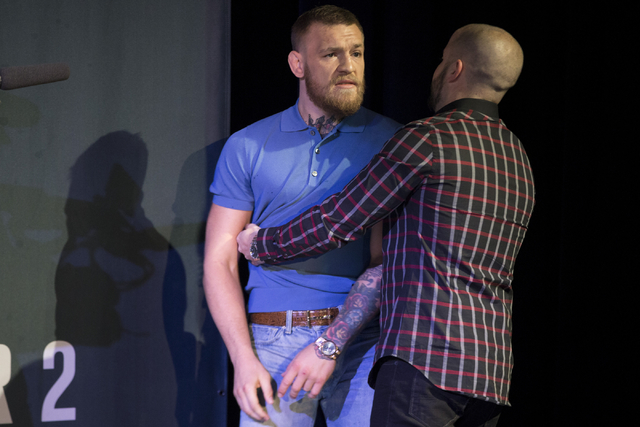 Conor McGregor is held back from an altercation with his team and that of his opponent Nate Diaz during the UFC 202 press conference at the MGM Grand hotel-casino on Wednesday, Aug. 17, 2016, in Las Vegas. Erik Verduzco/Las Vegas Review-Journal Follow @Erik_Verduzco 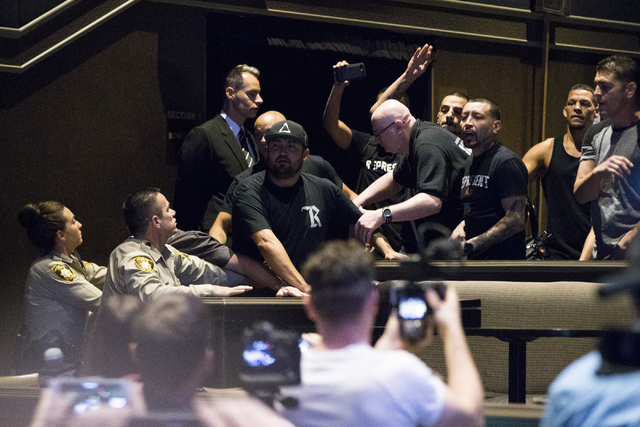 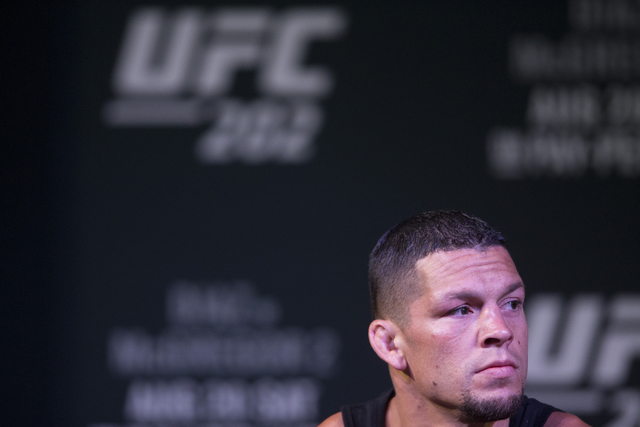 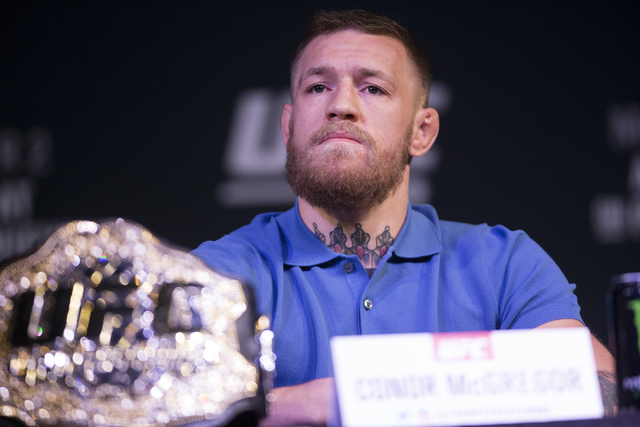 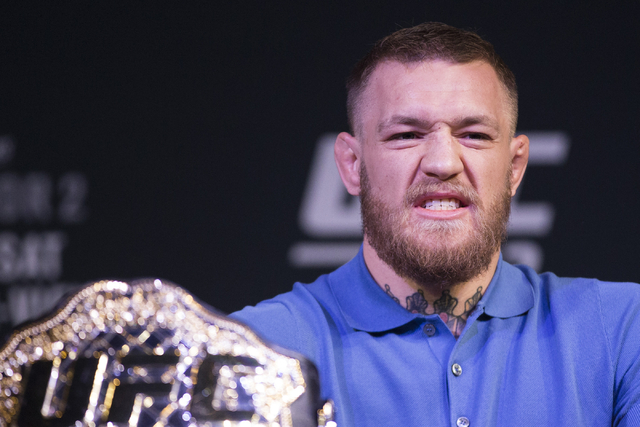 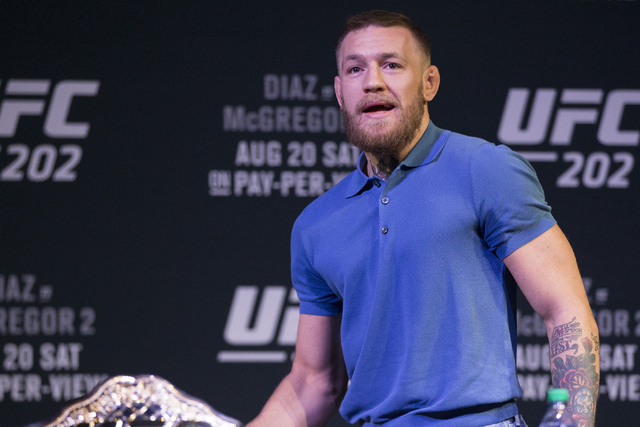 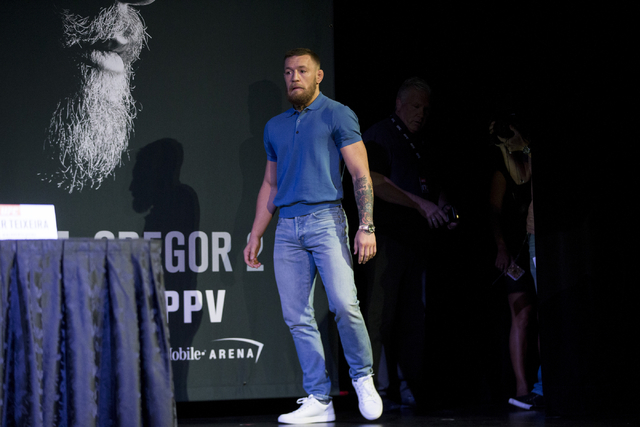 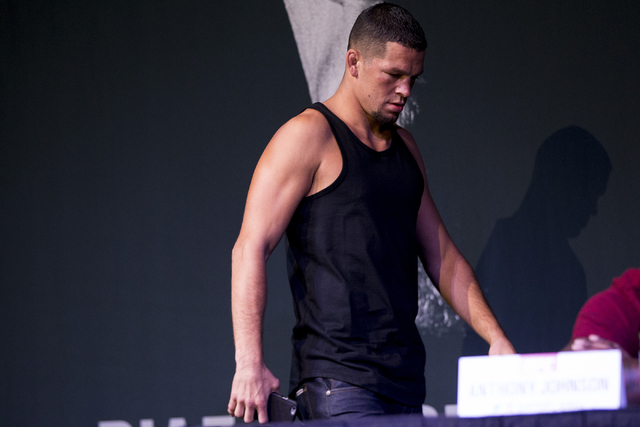 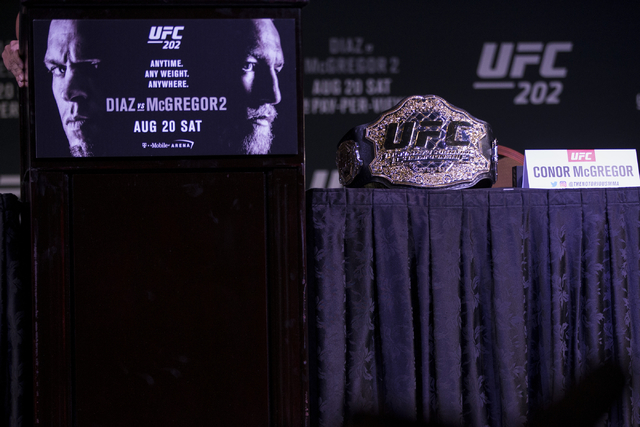 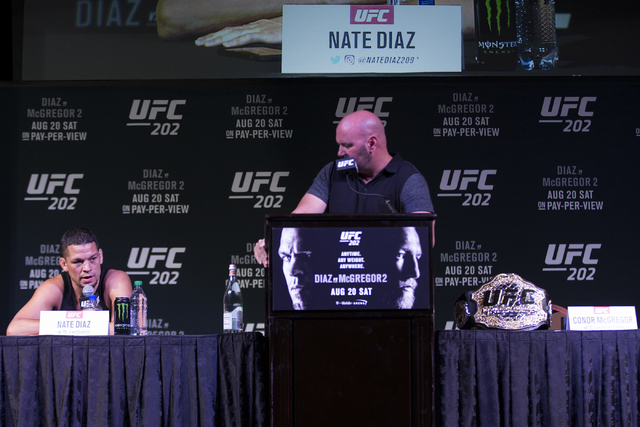 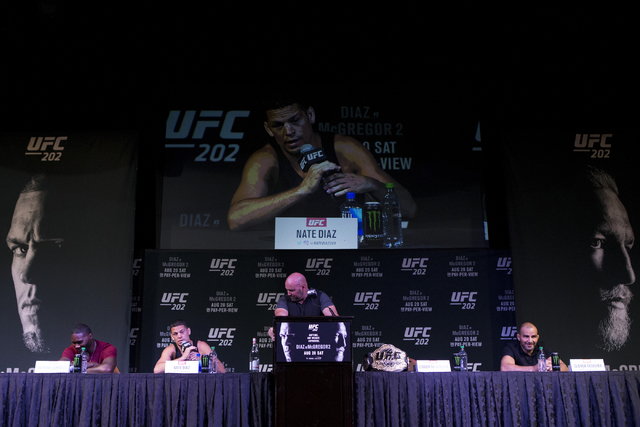 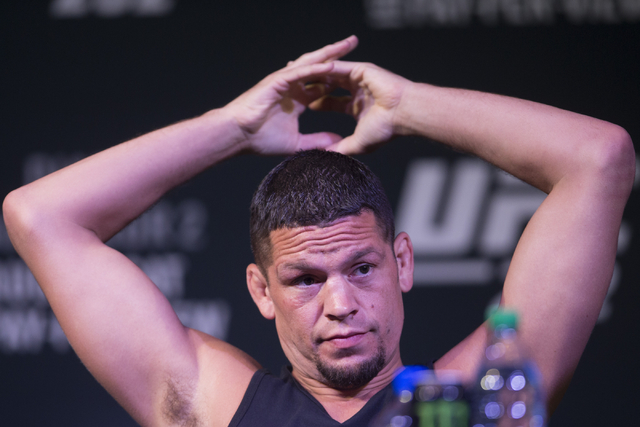 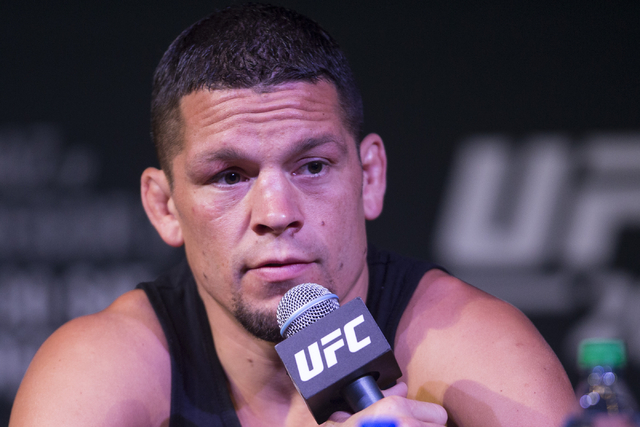 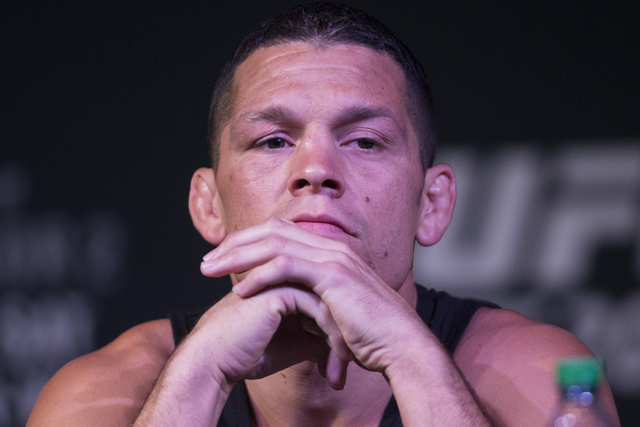 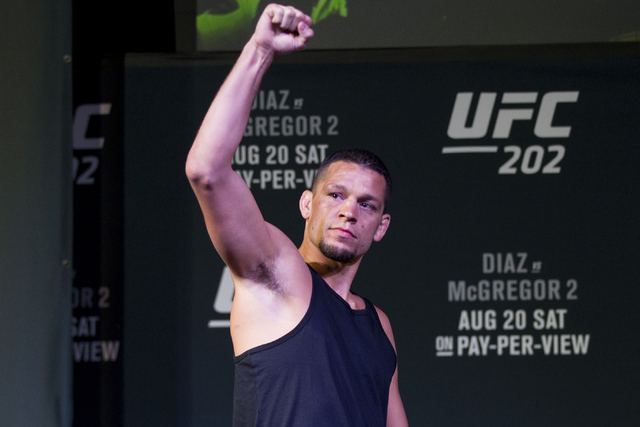 What started as yet another odd news conference involving Conor McGregor ended in complete chaos Wednesday at the MGM Grand.

McGregor arrived more than 15 minutes late, after UFC president Dana White began the news conference without the typically tardy Irish superstar, who will fight Nate Diaz in a rematch at UFC 202 on Saturday at T-Mobile Arena. Once McGregor finally took his place on the dais, the situation quickly deteriorated.

Diaz, who appeared to be acting on the directions of his older brother and UFC star Nick Diaz, rose from his seat and walked off the stage in the David Copperfield Theater — in the middle of McGregor’s response to a question just minutes after his arrival.

As Nate Diaz led his entourage toward the exit, he and some of his teammates held up their middle fingers and hurled expletives and threats at McGregor and his entourage, with McGregor firing back from the stage.

“You will do (expletive) nothing,” McGregor uttered several times. “Get the (expletive) out of here.”

Soon, more than words were flying through the air.

Water bottles were thrown in the direction of a group of McGregor’s friends and training partners, several of which were tossed directly back.

From the stage, McGregor grabbed an unopened can of an energy drink and lobbed it toward Diaz and his crew, which included UFC lightweight contender Gilbert Melendez and former UFC fighter Jake Shields.

An agitated White, who could be heard onstage instructing McGregor not to throw the can, quickly called an end to the news conference.

“Sorry, guys. See you Saturday,” said White, referring to the rematch between McGregor and Diaz, which will be contested at welterweight and tops a pay-per-view card that begins at 7 p.m.

Nobody appeared injured in the fracas, though several people were struck with projectiles, including rolls of tape.

Early on, it appeared the story of the day would be White’s decision to begin the news conference without the enigmatic headliner.

McGregor regularly shows up late for scheduled appearances, and his rematch against Diaz was removed from the UFC 200 card when McGregor decided not to fly to Las Vegas for a news conference, triggering a public spat between the featherweight champion and the organization.

“He has to start respecting people’s time, man,” White said of starting without McGregor. “Yours, mine, (the other fighters), David Copperfield’s. Everybody.”

Light heavyweights Anthony Johnson and Glover Teixeira, who will meet Saturday for the top contender spot, smiled through much of the drama onstage before they were whisked away by White.

It was not the first time there has been drama between the camps. Before the first meeting in March, a tense news conference in Los Angeles almost bubbled over into a physical altercation. During a staredown two days before the bout, McGregor took a swipe at Diaz’s hand and the two had to be separated.

Diaz’s camp also has a history of issues outside of competition, most notably a brawl on a 2010 Strikeforce card on CBS that was triggered when Jason “Mayhem” Miller entered the cage to challenge Shields to a fight and was violently beaten down by a group that included Nick and Nate Diaz.

The Diaz brothers also were involved in a skirmish with UFC fighter Khabib Nurmagomedov last year while attending a World Series of Fighting event at Planet Hollywood.

UFC 202: McGregor sticks with prediction to KO Diaz in the 2nd round — VIDEO