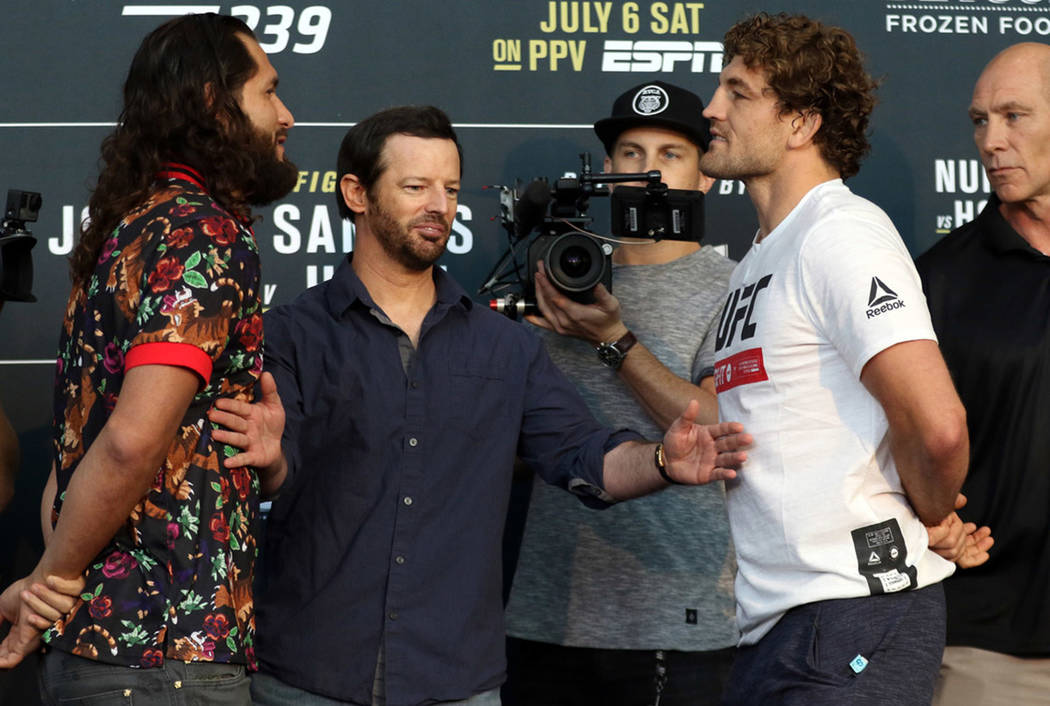 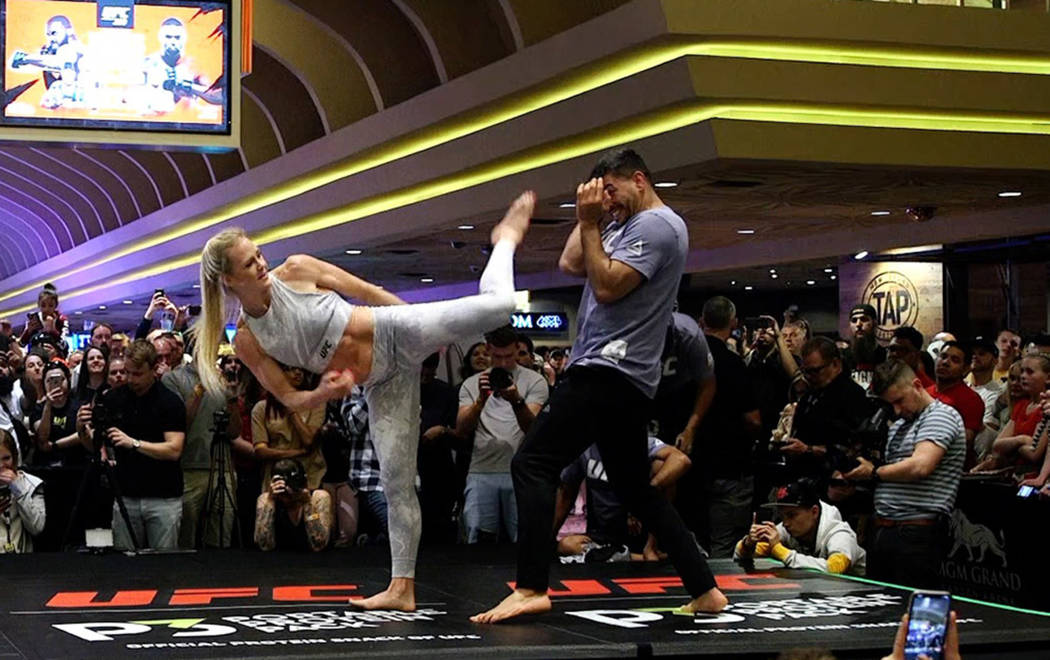 UFC bantamweight contender Holly Holm launches a kick at the open workouts at the MGM Grand hotel-casino during International Fight Week in Las Vegas, Wednesday, July 3, 2019. She will challenge Amanda Nunes, not pictured, for the division title at UFC 239 on July 6 at the T-Mobile Arena. (Heidi Fang /Las Vegas Review-Journal) @HeidiFang 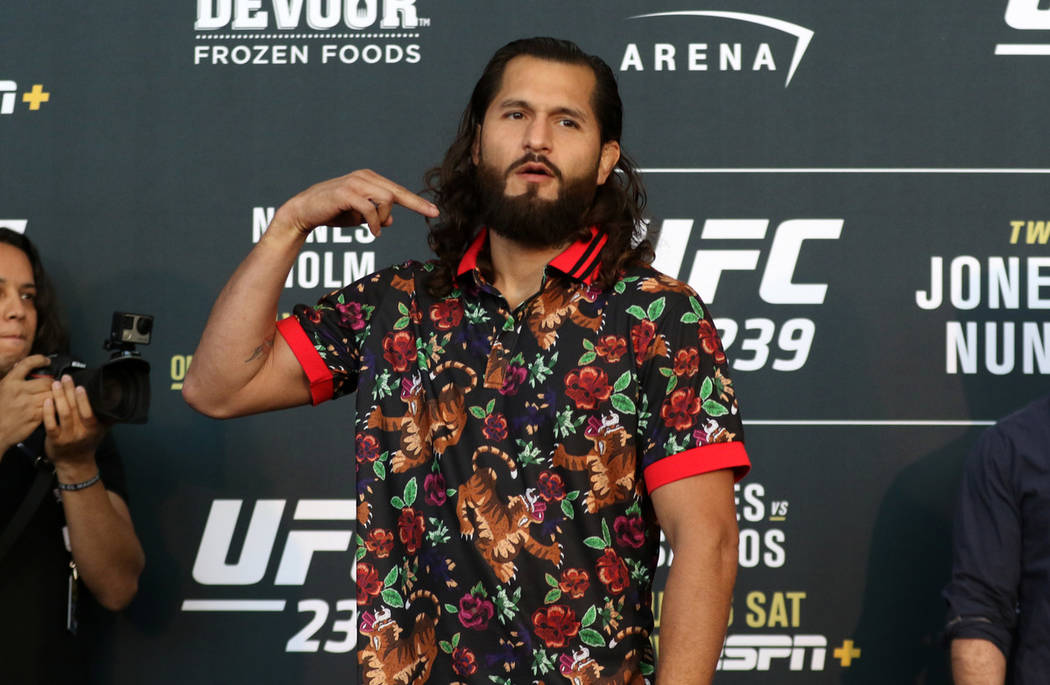 UFC welterweight Jorge Masvidal gestures after a staredown with his opponent, Ben Askren, not pictured, at a media day at the T-Mobile Arena in Las Vegas on Thursday, July 4, 2019 to promote UFC 239 taking place on July 6. (Heidi Fang /Las Vegas Review-Journal) @HeidiFang 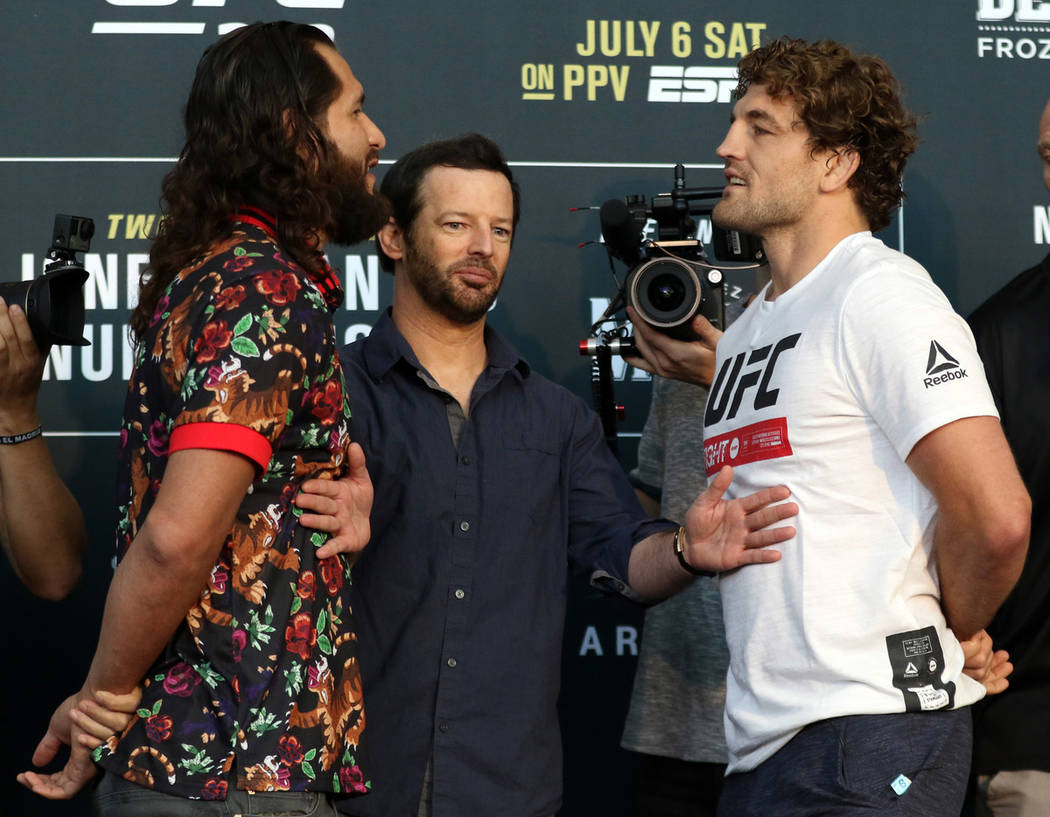 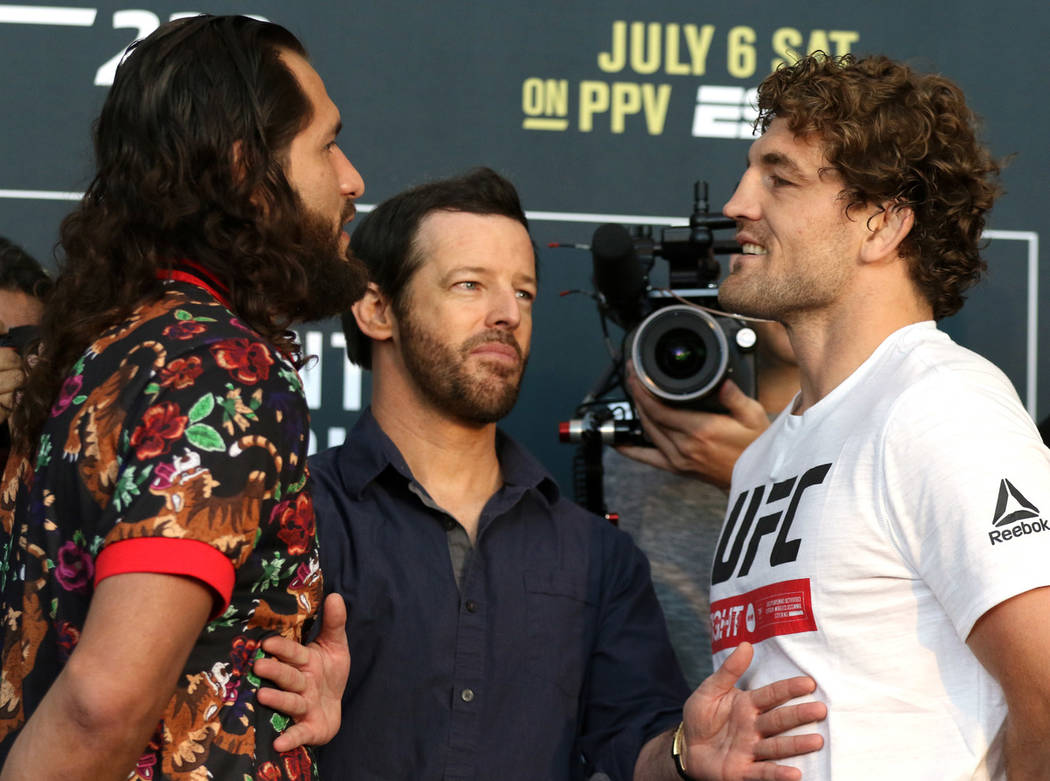 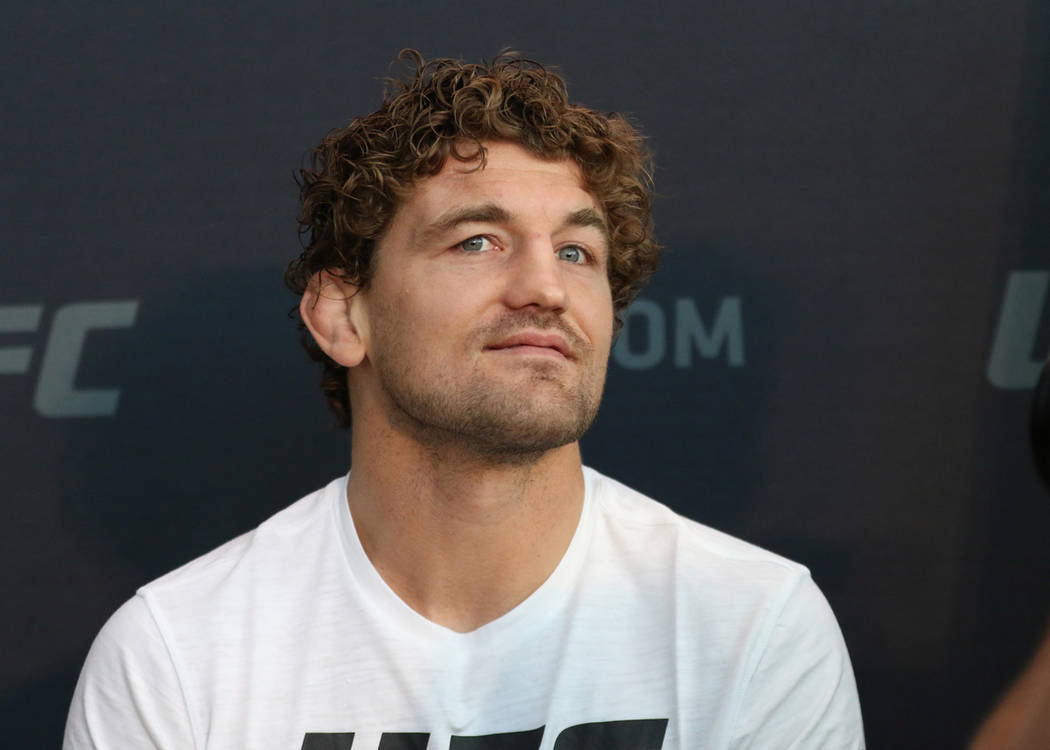 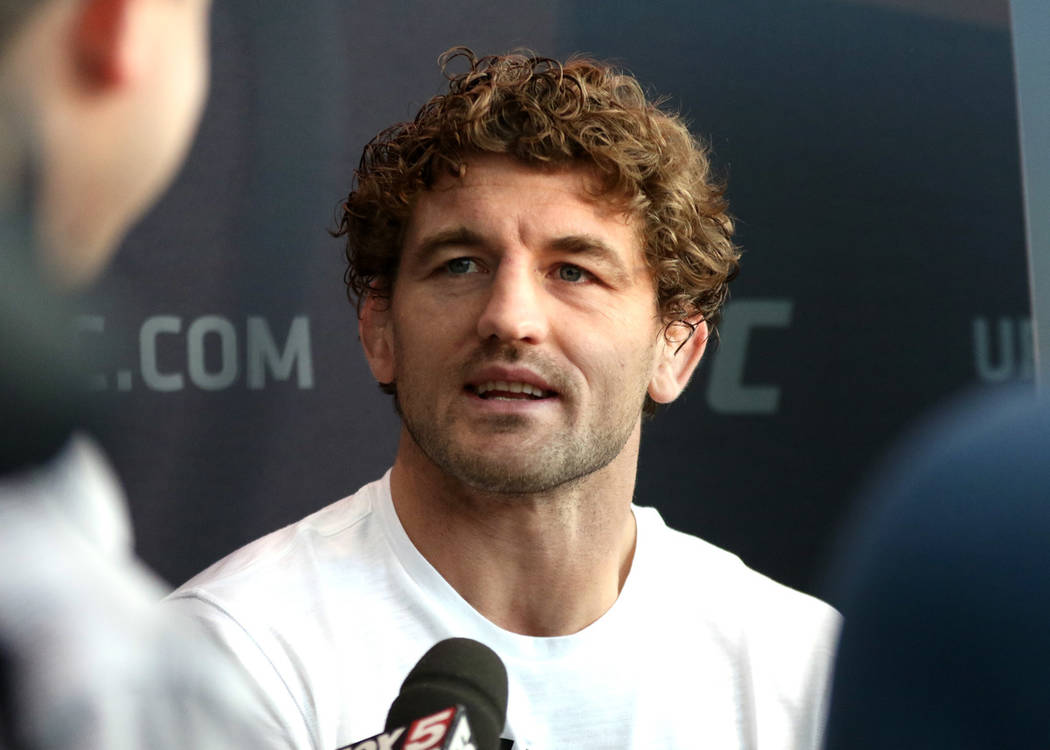 Undefeated welterweight contender Ben Askren had a simple question for Jorge Masvidal when they finally came face-to-face after weeks of trash talk ahead of their Saturday night UFC 239 clash at T-Mobile Arena.

“Why are you so mad?” Askren asked at Thursday’s media day.

The answer may be a bit more complicated, though Masvidal disagreed with the entire premise.

“Mad? No,” he later told reporters. “I’m getting paid no matter what happens on Saturday. I’m putting my kids further in life. I’m bettering their education. I’m going to be able to purchase more cheeseburgers of higher quality. No matter what happens, I’m (expletive) happy. So am I angry? No. But extra motivated to hurt this dude? (Expletive) yeah.”

It’s not the first time Askren, a two-time NCAA champion and four-time All-American wrestler at Missouri, has rubbed an opponent the wrong way.

The 34-year-old father of three seems to take particular pleasure in getting under the skin of opponents and potential opponents, often with his preferred “Boom, roasted” tagline.

“I really don’t know why I get them so mad,” Askren said. “I think it’s that every time in these guys’ lives they’ve had someone teasing them or making fun of them, they’ve just been able to say, ‘Shut up or I’ll kick your butt.’ And that has worked for them their whole lives. Now, they’ve got someone teasing them and they don’t know what to say because they can’t kick my butt and they don’t have the wits to come back.”

Masvidal, who snapped a two-fight losing streak with a thrilling knockout of Darren Till in March to jump back into the welterweight title picture, made no secret of how he plans to address the situation even if he can’t pinpoint the origin of his animosity.

“It’s not just beating him,” the 34-year-old lifelong south Floridian said. “That’s not enough. It’s taking him out of production. That’s really what I want to do man. I mean that in all honesty.

“I just don’t like the dude. He’s a corny idiot. He meets people and he’s trying to come up with jokes about them right away and see if he’s the alpha or whatever. I don’t do that. If I just met you, I don’t (expletive) with you. I give you your space. Don’t (expletive) with me because maybe something might happen. I just don’t like the dude, man.”

The win over Till and an ensuing backstage scrap with Leon Edwards that was captured on camera have helped thrust Masvidal into a new stratus of popularity after 16 years as a pro fighter, including the last six in the UFC. He combines a brash persona with an exciting fighting style that should help sustain that bounce and Masvidal believes the fans are truly behind him in this fight.

He said he has been inundated with requests to not only win on Saturday, but graphic descriptions of what fans want done to Askren’s face.

Masvidal was handed a drawing from a fan at the MGM Grand on Wednesday of him stepping on Askren’s face with a plea for a re-enactment in the cage on Saturday.

“They want me to make one side of his face not look like the other side and their wish is my command,” he said.

Masvidal went on to recite several other requests of damage to be done in very gory detail and had even more sexually-graphic words to describe what he thinks of what he describes as Askren’s one-dimensional wrestling attack in the cage.

Askren, the former Bellator and ONE Championship welterweight titleholder who defeated former UFC champ Robbie Lawler in his long-awaited organizational debut in March, can only laugh.

“He said he wants to end my bloodline and it’s hilarious because I already have three kids,” Askren said. “Number one, it’s a pretty disturbing thing to say, but number two, it’s also just stupid.

“What I don’t understand is I signed to fight him in a cage and there’s a couple rules, but not a whole lot, and how you think your yelling and threatening is going to make it worse for me, I just can’t comprehend.”

The bout is part of a pay-per-view card at T-Mobile Arena headlined by two title fights as Jon Jones will defend the light heavyweight title against Thiago Santos and women’s bantamweight champion Amanda Nunes puts one of her two belts on the line against former champ Holly Holm.