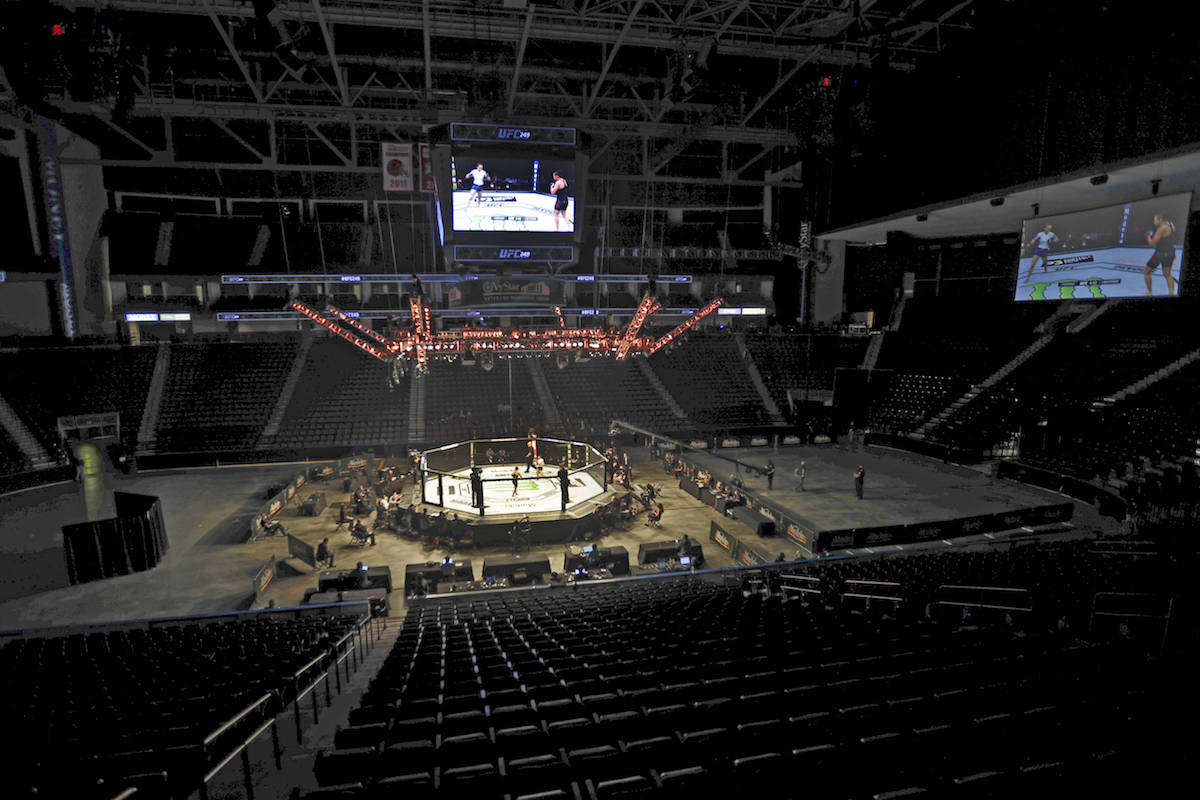 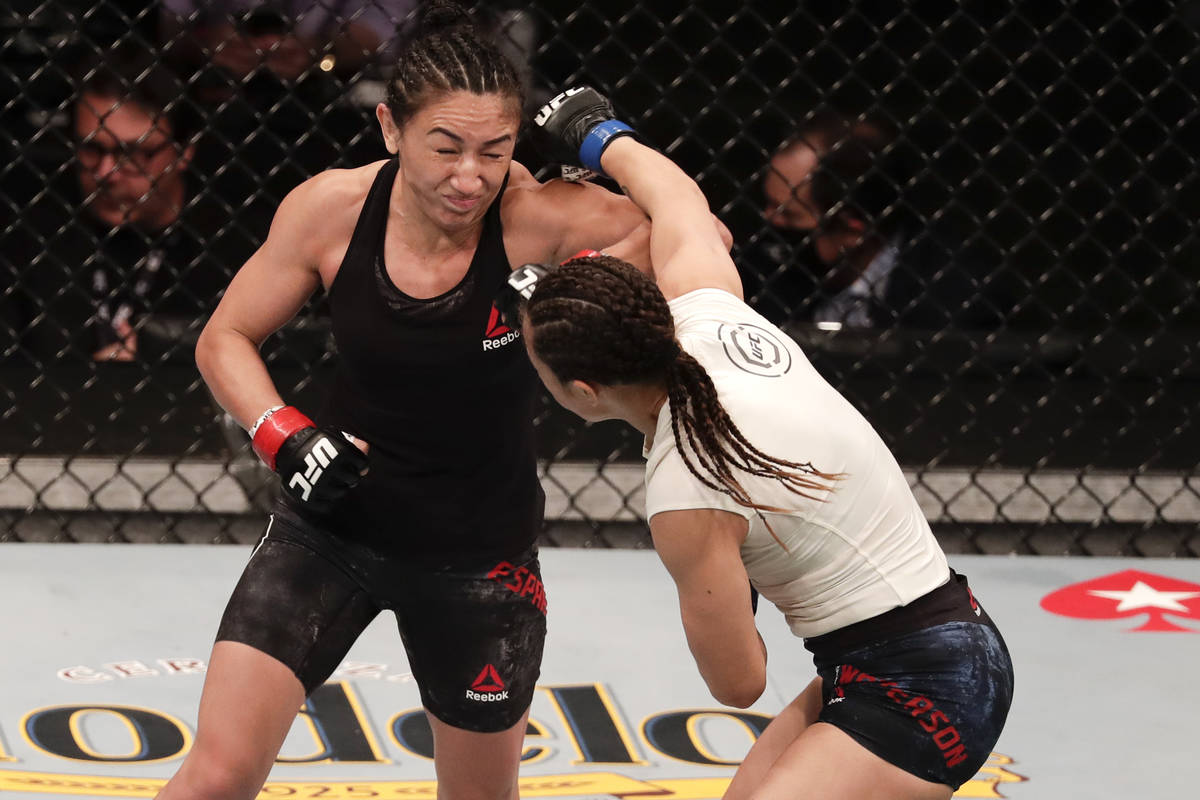 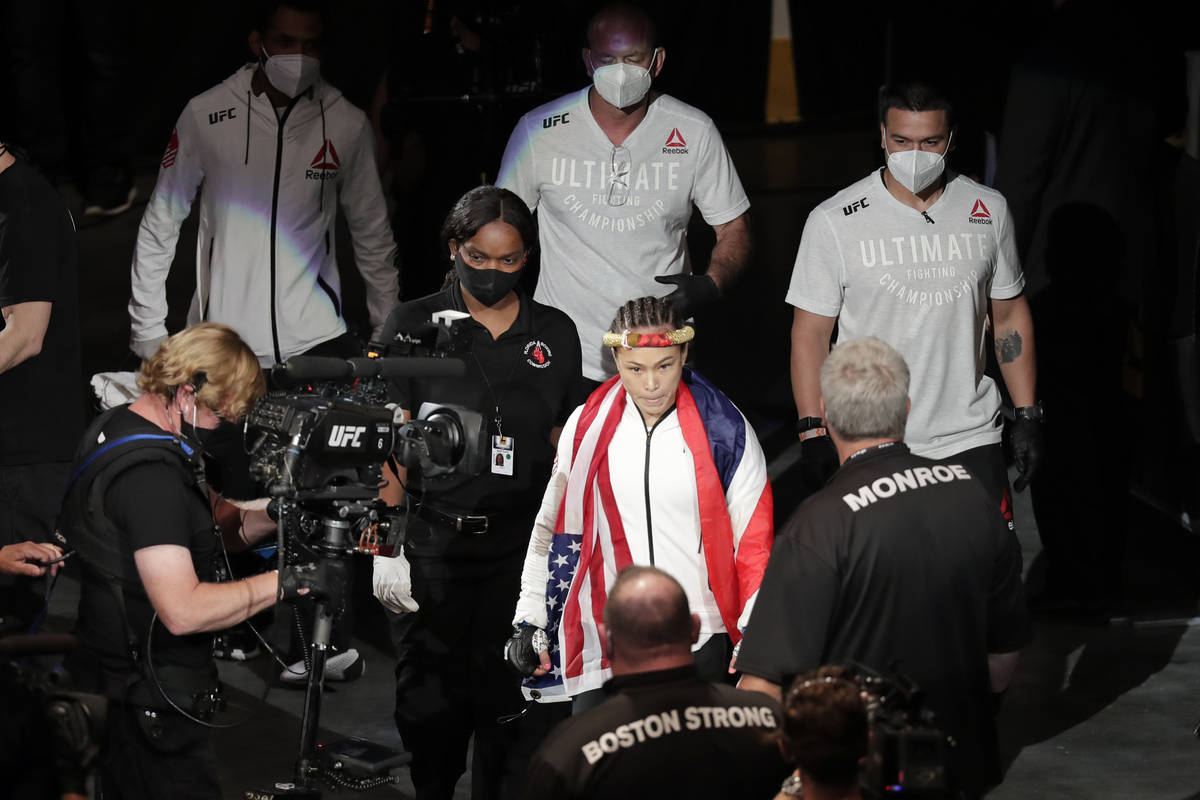 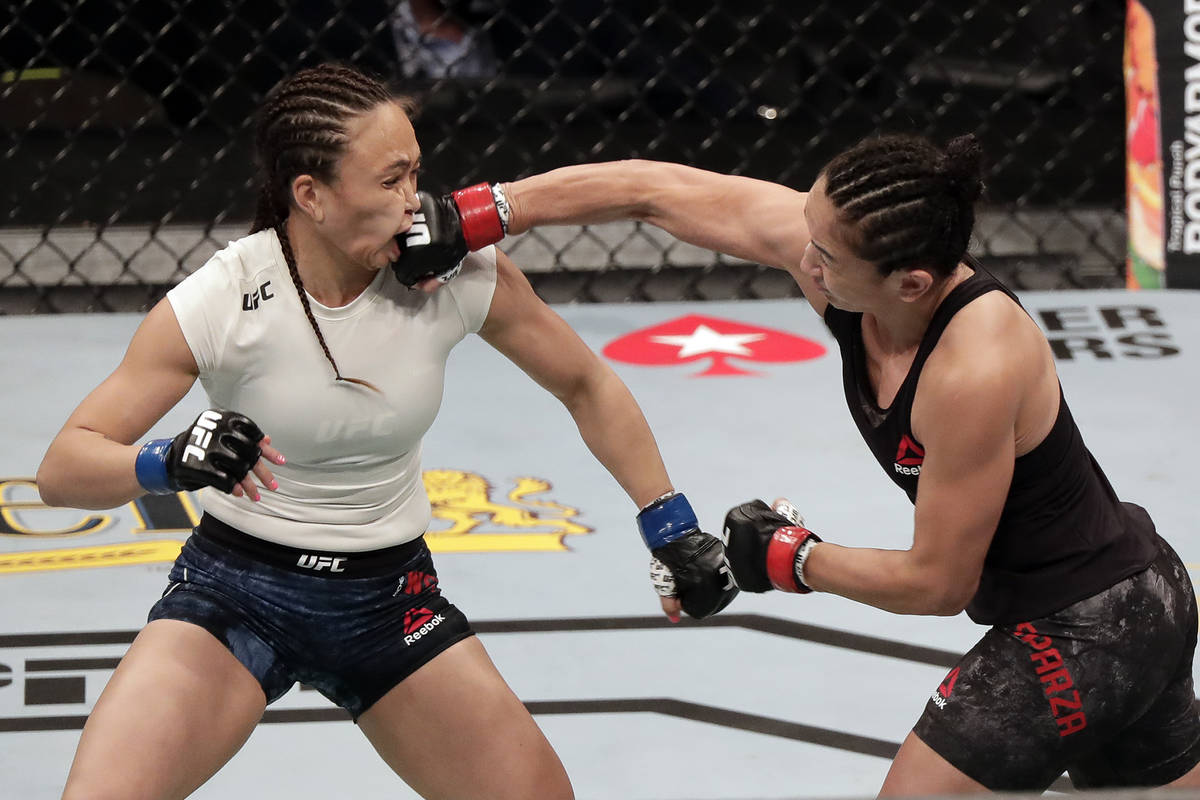 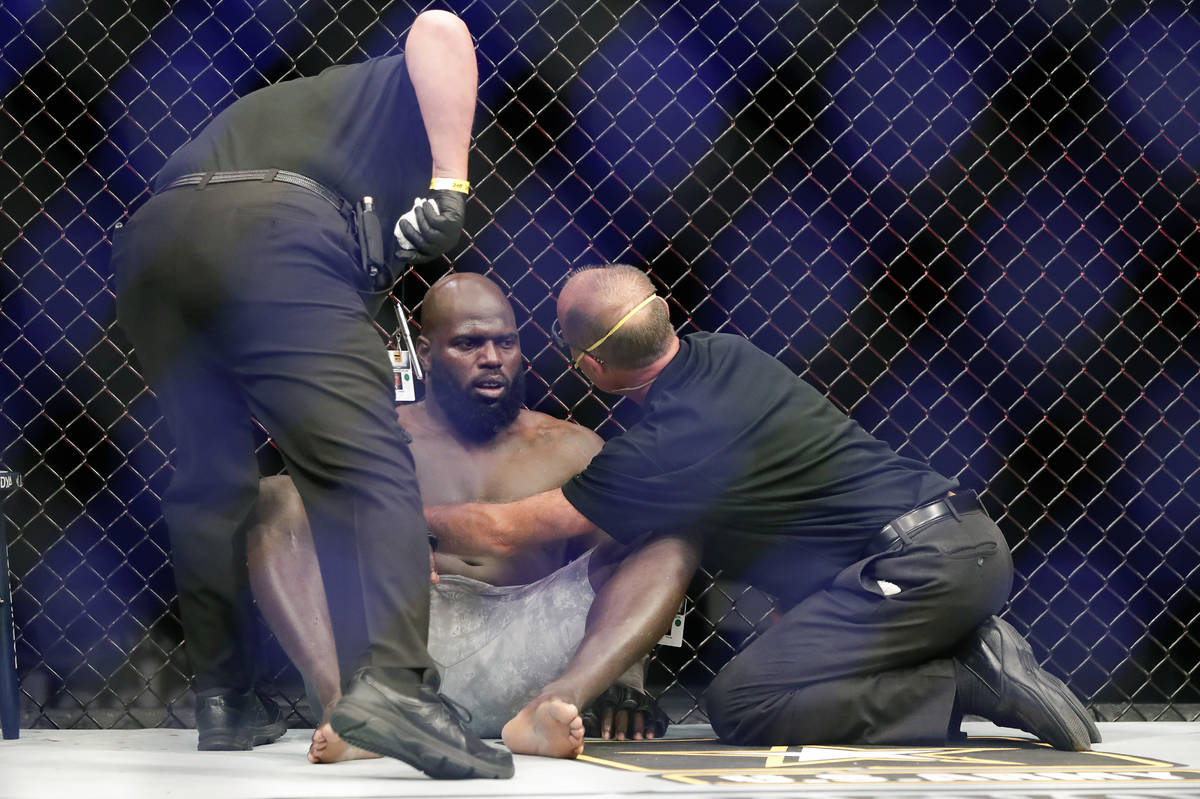 Medical personnel check on Jairzinho Rozenstruck, center, after he was knocked out by Francis Ngannou in the first round of a UFC 249 mixed martial arts bout Saturday, May 9, 2020, in Jacksonville, Fla. (AP Photo/John Raoux) 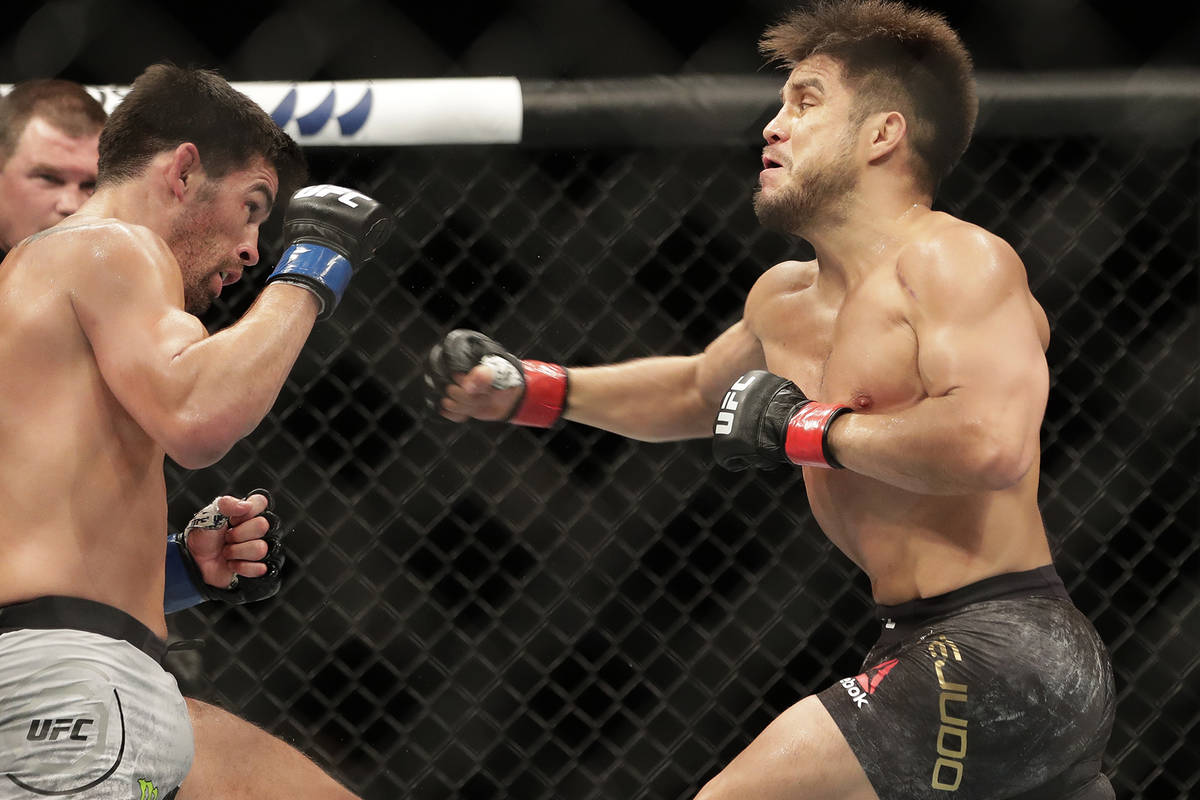 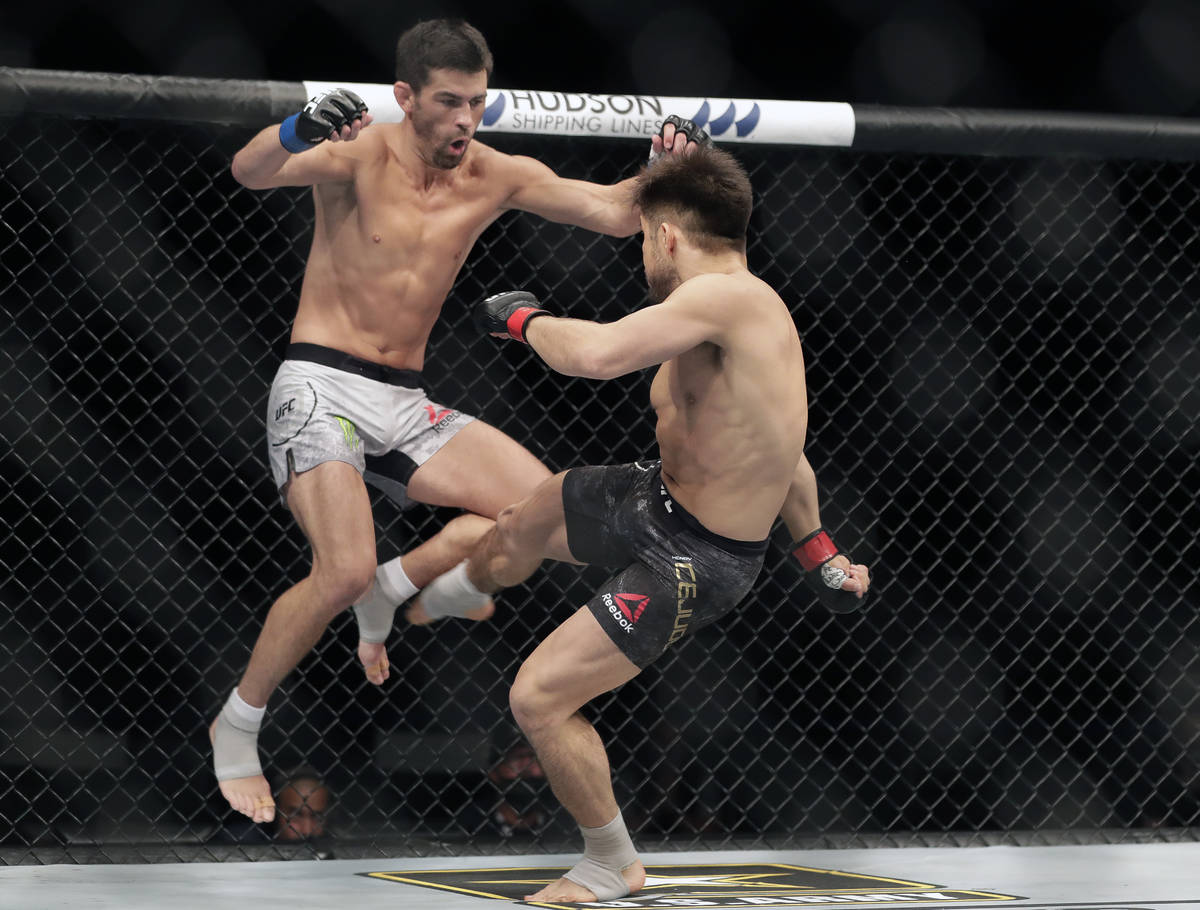 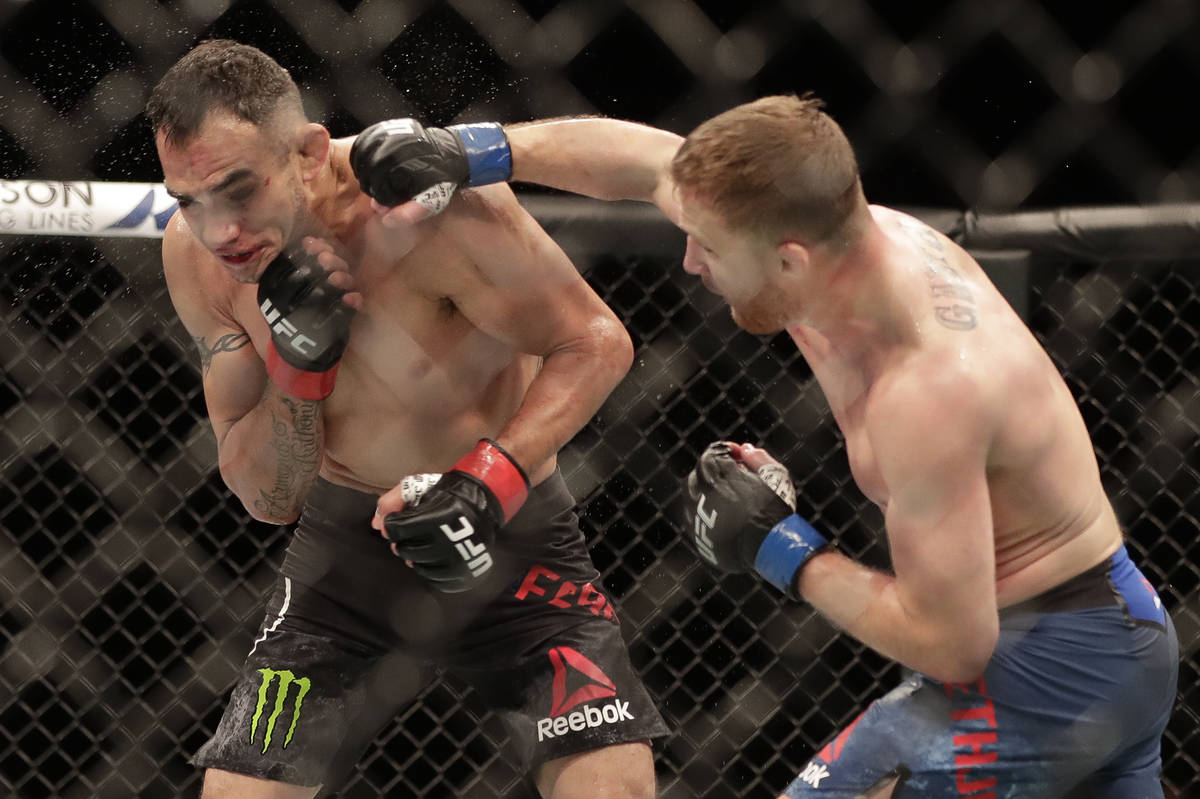 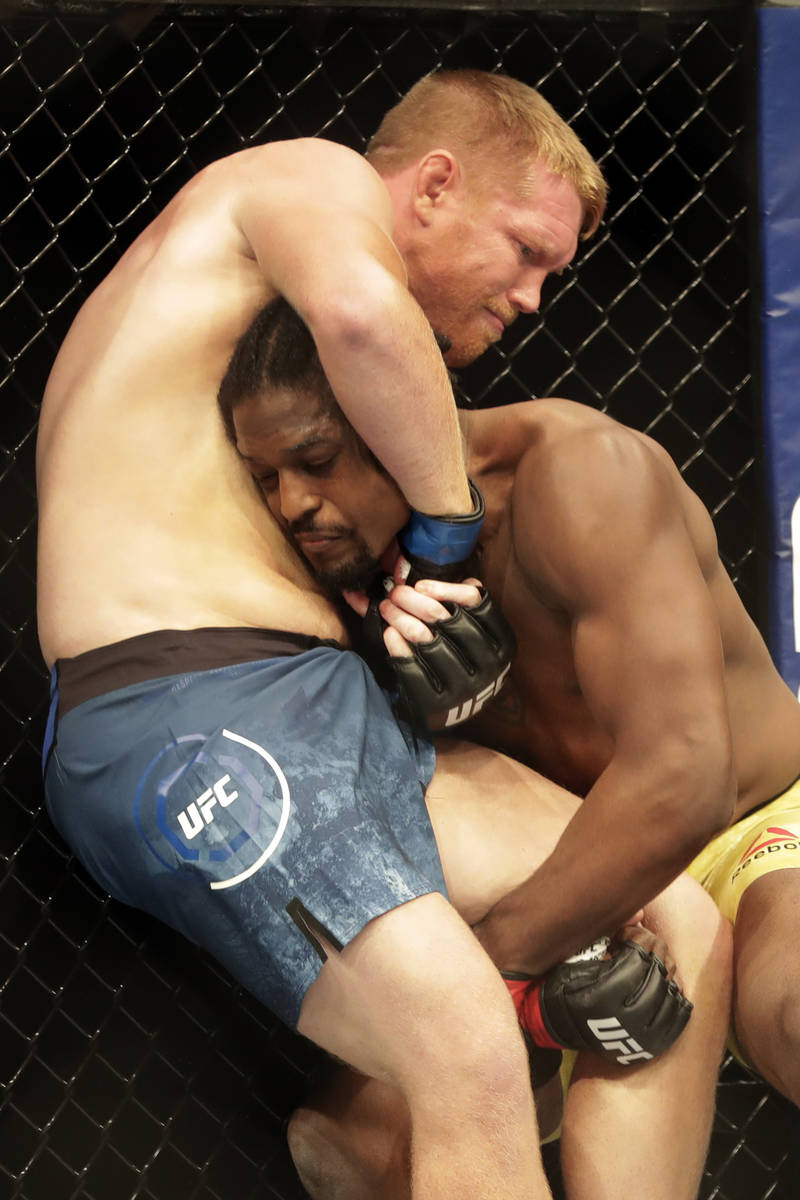 JACKSONVILLE, Florida — Former women’s strawweight champion Carla Esparza heard the criticism loudly and clearly that she wasn’t mixing up her striking and wrestling enough during her UFC 249 bout against Michelle Waterson on Saturday night.

She heeded the call, using the advice to turn things around and going on to a split-decision victory. But it didn’t come from her corner.

Esparza heard television analyst Daniel Cormier as he conveyed his opinions to viewers due to the event taking place in an empty VyStar Veterans Memorial Arena.

“It was such a weird thing because normally you hear the crowd and you might hear the (broadcasters) very faintly, but you could hear everything here,” she said. “I heard Cormier say she needs to mix her takedowns and striking more and I was like, ‘OK, maybe I’ll mix it in and go for some fakes.’ I definitely heard it and tried to use it to my advantage.”

It was far from a normal fight night, but it was a return to live sports in some form.

A wild main event between Justin Gaethje and Tony Ferguson was a roller-coaster ride of massive shots, particularly from Gaethje’s left hand.

It ended in the fifth round as the referee finally decided he had seen enough of Ferguson somehow withstanding thunderous left hands from Gaethje, who captured the interim lightweight title and ended Ferguson’s 12-fight winning streak.

The thriller helped cap a night that made the positive coronavirus test that forced Ronaldo “Jacare” Souza off the card Friday night and briefly left the event in doubt seem like a distant memory by the time fighters actually stepped in the cage.

The live broadcast was even kicked off by a message from President Donald Trump, thanking his friend Dana White for being the first head of a major sports league in America to return to competition.

“We love it,” Trump said in a video shot from the White House grounds. “We think it’s important. Get the sports leagues back. Let’s play. You do the social distancing and whatever else you have to do. But we need sports. We want our sports back.”

He defended his title with a second-round knockout of former champ Dominick Cruz with just two seconds remaining before making a surprising retirement announcement.

“I’m ruthless,” the two-division champion and Olympic gold medalist said. “I may be cringy and corny, but boy can I fight. I’m the greatest combat sports athlete of all time.

“I’m happy with my career. I’ve done enough in the sport. Triple-C is out.”

Esparza wasn’t the only fighter to take advantage of the unique situation.

Welterweight Vicente Luque, who stopped Niko Price by forcing the ringside doctor to step in due to a nasty cut in the third round, said he heard commentator Joe Rogan say Price was going for a d’Arce choke and quickly countered the maneuver.

He also has a coach, who lives in Brazil and couldn’t travel to the fight, helping out in his corner over FaceTime

Greg Hardy, a controversial former NFL star who earned a decision win over heavyweight Yorgan de Castro, finally started checking leg kicks after getting pelted in the first round.

He credited the adjustment to Cormier’s suggestion from the broadcast table.

Fellow heavyweight Francis Ngannou didn’t have time to worry about any of that. The Las Vegan, who said this week he was unsure of how he would react to competing in such a sterile venue, needed just 20 seconds to knock out Jairzinho Rozenstruik and hand him his first loss.

The silence at such violence was deafening, a phenomenon also noted by former lightweight champion Anthony Pettis after his decision victory over Donald “Cowboy” Cerrone.

“I need to go back and watch this fight because it’s hard to assess without the crowd,” he said. “When I land stuff, I hear the crowd and know it was a good one. This time, there was no crowd. I saw his head pop, but there was nothing, so it’s hard to tell.”

Even ignoring the lack of crowd noise, it was impossible to not take note of the cornermen, camera operators and minimal amount of personnel in the building all wearing face masks.

Two more events are planned for the same venue on Wednesday and Saturday.