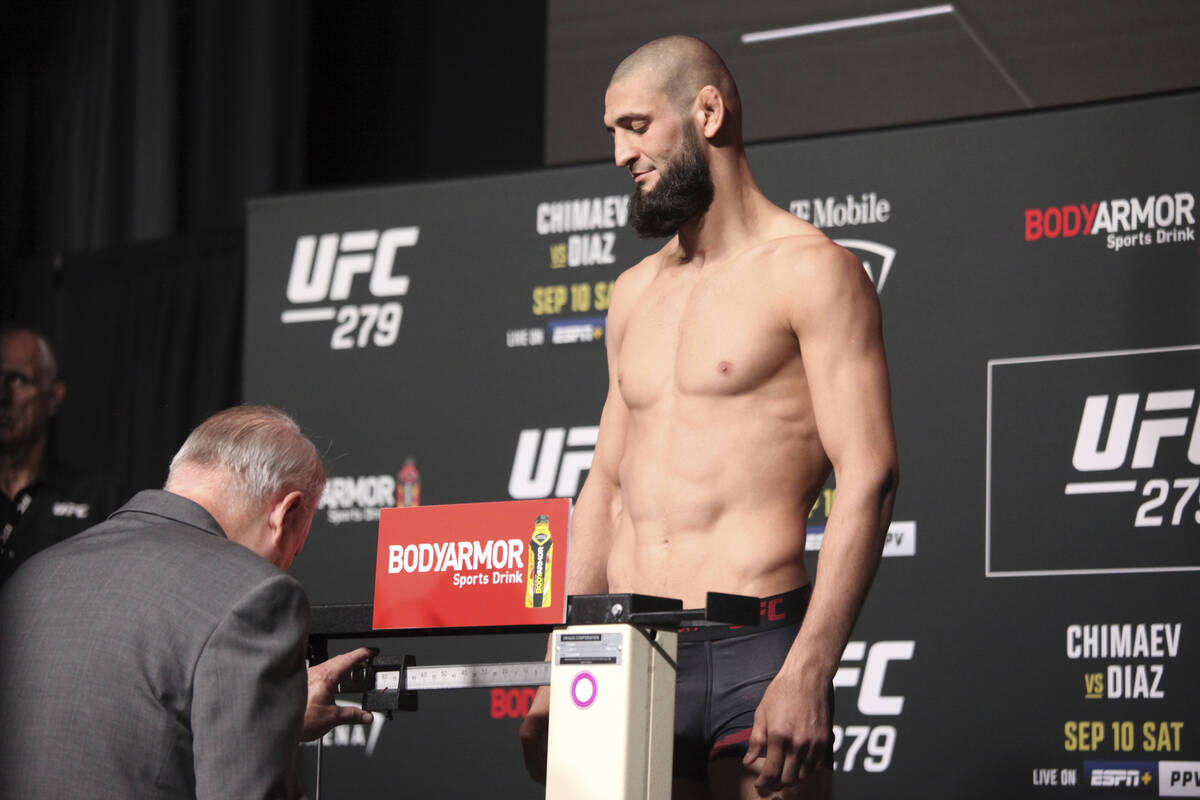 Khamzat Chimaev weighs in for their UFC 279 bout during the official weigh-ins on September 9, 2022, at the UFC APEX in Las Vegas, NV. Chimaev weighed in at 178.5 pounds for his 170 pound fight. (Photo by Amy Kaplan/Icon Sportswire) (Icon Sportswire via AP Images)

Nate Diaz will still fight in the main event of UFC 279 on Saturday at T-Mobile Arena, but he will have a different opponent after one of the wildest 24-hour stretches in the company’s history.

Diaz was to fight breakout star Khamzat Chimaev, who missed weight by 7.5 pounds Friday morning and triggered a mad scramble to reshuffle the card.

Li Jingliang will meet Daniel Rodriguez in a 180-pound catchweight bout in the third reconfigured fight that keeps the top six fighters on the card in action against new opponents.

Ferguson had been scheduled to fight Jingliang, and Rodriguez was to meet Holland.

“It’s been a hell of a night and a hell of a morning,” UFC president Dana White said on an ESPN social media livestream Friday night. “It’s not by coincidence that we stack guys the same weight on the same card in case anything goes wrong.”

The weigh-in drama came after Thursday’s news conference promoting the event was halted minutes after starting because of what White called a “big (expletive) show” backstage.

A fracas, allegedly ignited by a confrontation between Chimaev and Holland, erupted between several fighters and their entourages. White said the UFC typically employs a skeleton security crew at news conferences because altercations are usually rare and quickly contained.

That was not the case Thursday, but White vowed there would be changes.

“There were multiple, crazy, I don’t even know what to call it,” he said Thursday night. “For 22 years, however long I’ve been doing this, we’ve never had an incident like today. All hell broke loose out here. We stopped it, but we didn’t do a good job of not letting it happen. It’s never happened before, but we’ll be ready for it the next time.

“It will never happen again.”

Less than 24 hours later, White was left trying to piece together a pay-per-view card on the eve of a major event.

The new headliner between Ferguson and Diaz is a far more competitive bout on paper than Diaz against Chimaev, who had been as much as a -1,200 favorite. Ferguson is a -170 choice over Diaz, who is on the final fight of his contract and expected to hit the open market as a free agent. People with knowledge of the negotiations indicated his acceptance of a new opponent included renegotiated terms for the bout but not an extension.

“Nate and Tony, the fans have wanted to see this one forever,” White said. “It’s gonna happen now before Nate leaves the UFC.”

Chimaev is a -400 choice over Holland, but that price could be reflective of a diminished belief in Chimaev after Friday’s developments. Chimaev was advised to stop cutting weight by the medical team because of complications, according to UFC officials.

It’s one of the first bumps in the road for Chimaev, an undefeated 28-year-old who was nearly flawless in four UFC fights before battling through adversity to win a decision over former title challenger Gilbert Burns in his last fight.

The pay-per-view bout kicks off at 7 p.m., with preliminary action beginning at 3.