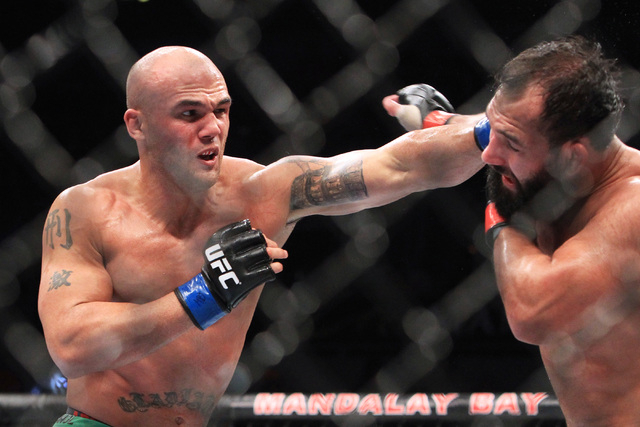 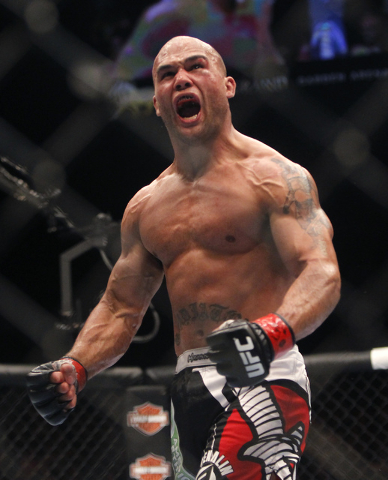 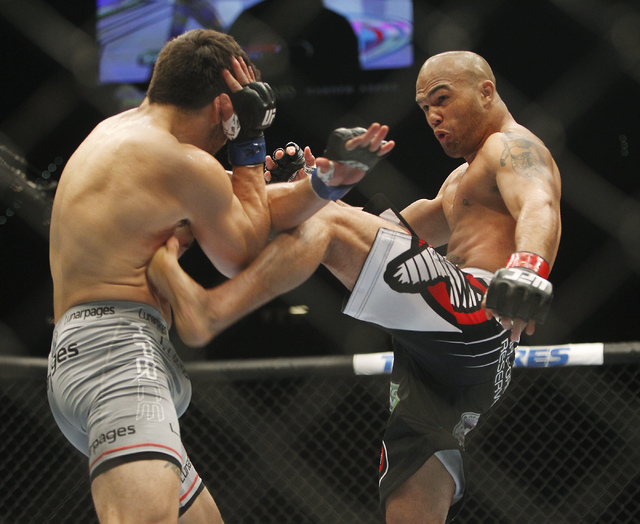 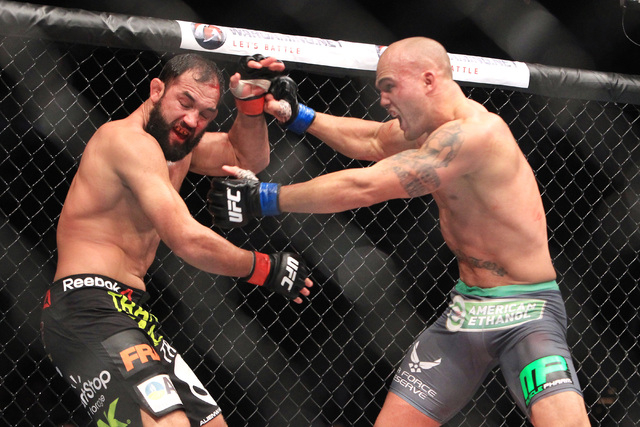 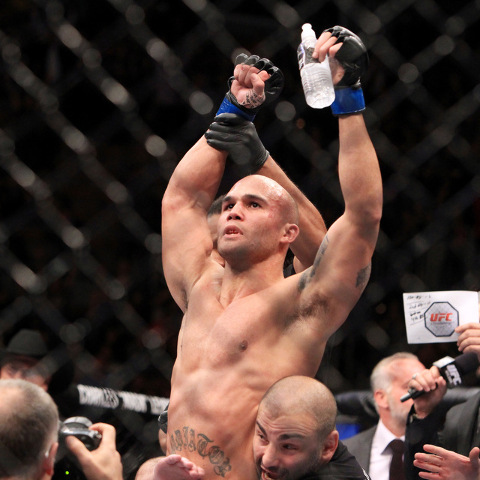 Of the four fighters in the co-main events at UFC 189 on Saturday at the MGM Grand Garden, Robbie Lawler is getting the least fanfare and probably will enter the cage as the biggest underdog.

Yet he’s the only one who will be carrying a belt into his fight.

Lawler will defend the Ultimate Fighting Championship welterweight title for the first time against Rory MacDonald on the same night that emerging superstar Conor McGregor headlines the show in an interim featherweight title bout against Chad Mendes.

McGregor draws an inordinate amount of attention, which has in turn been focused on Mendes, who took the fight on late notice after champion Jose Aldo withdrew with a rib injury.

MacDonald, a training partner of former champion Georges St. Pierre, long has been the presumed heir apparent to dominance in the division. Much of the narrative about this fight has been about how MacDonald finally has the opportunity to fulfill that prophecy.

If it’s true the squeaky wheel gets the grease, Lawler is the silent tire cruising down the road straight in its lane.

The quiet veteran is just fine flying under the radar.

“I don’t pay much attention to what people are talking about or focusing on,” the 33-year-old said. “I pay attention to my coaches, and I believe in myself. That’s what I concentrate on. Getting better and being the best fighter I can be. I don’t worry about naysayers at all. I’m just going to go out there and perform.

It won’t be an easy task. Lawler won a split decision over MacDonald in 2013, but it’s his only loss in the past five years.

MacDonald has been a consistent contender over that stretch, winning eight of nine. This will be his first shot at the belt, and the challenger is a minus-170 favorite to walk out of the cage with the title despite the result of the first fight.

“Maybe people don’t see what’s right in front of them,” Lawler said of being an underdog. “But come Saturday, people are going to get to see why I’m the champion. I have the belt because I’m the best.”

His belief doesn’t just come from winning the first matchup. Lawler made his UFC debut in 2002 when he was 20. He toiled in several other organizations to varied success, but had a career resurgence when he started training at American Top Team in Florida and dropped back down to welterweight for his return to the UFC in 2013.

He credited the camp for building him into a fighter that has won six of his seven fights since re-signing with the UFC after losing three of his final four in Strikeforce.

“I have confidence no matter who I’m fighting,” Lawler said. “My skills are at an all-time high, and my body feels great. That’s why I feel like I’m going to win this fight. It’s not because I’m on a win streak or I beat him before, it’s because I’m at my peak right now and I’m going to go out there and show that.”

MacDonald hasn’t spent much time dwelling on the first fight, either.

“For me, I don’t really look at it at all,” he said. “I’ve come a long way since that fight. I’m just practicing new techniques and become a whole new fighter since then. I’m focused on bringing a new attitude and just a better version of myself into this fight.”

It has been a long process for MacDonald to get to this point. When he first rose to top contender status, he was stuck behind St. Pierre, his friend and training partner, and unwilling to challenge him for the belt.

The loss to Lawler set him back, but the path to the title opened up when St. Pierre walked away from the sport. Now, MacDonald is on the verge of winning the belt at age 25.

“When I got into the UFC, I knew I wasn’t ready to fight for the belt,” he said. “I still had a lot of growth to do. I needed a lot of experience with top level guys, and it took time, but step by step I gained that experience, kept practicing techniques, developing new styles and keeping an open mind as a martial artist, and I’m here. And the road doesn’t end here after this, the life of a martial artist, it keeps going. After my career is over, I’m still going to be training martial arts and growing.”

It’s a similar approach to the one Lawler practices.

“I just look at every fight as a new challenge and every day as a new challenge to get better,” he said. “That’s what got me the title was learning and grinding away, and that’s what I’ll keep doing. I don’t look at this as defending a title or winning a title. I just see it as a big fight on a big stage, and I want to showcase who I am. It’s obviously a huge stage, but every fight’s a huge stage in the UFC.

“I’m just grinding away and living my life. I just happen to have a belt around my waist, and I’m the UFC champion. Not much has changed. It’s just awesome to be champ.”

He hopes he can still say the same Saturday night.