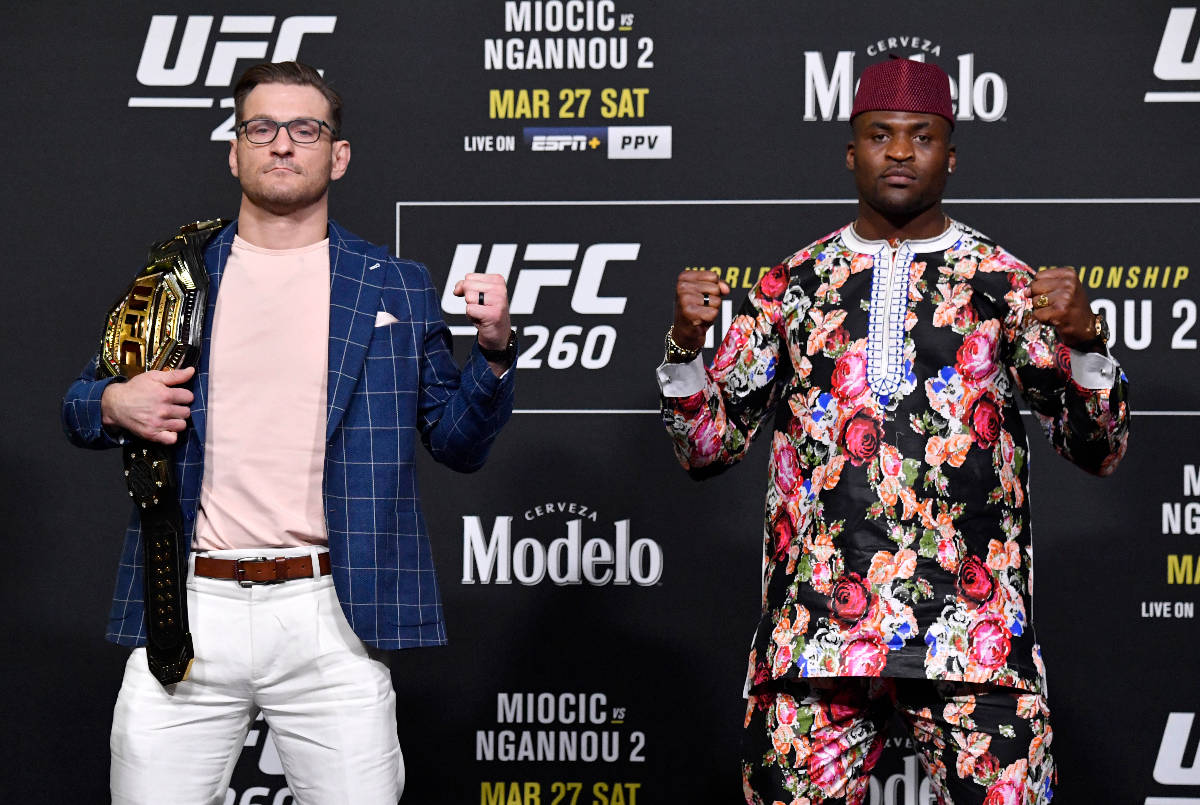 Opponents Stipe Miocic and Francis Ngannou of Cameroon pose for photos during the UFC 260 press conference at UFC APEX on March 25, 2021 in Las Vegas. (Photo by Jeff Bottari/Zuffa LLC))" 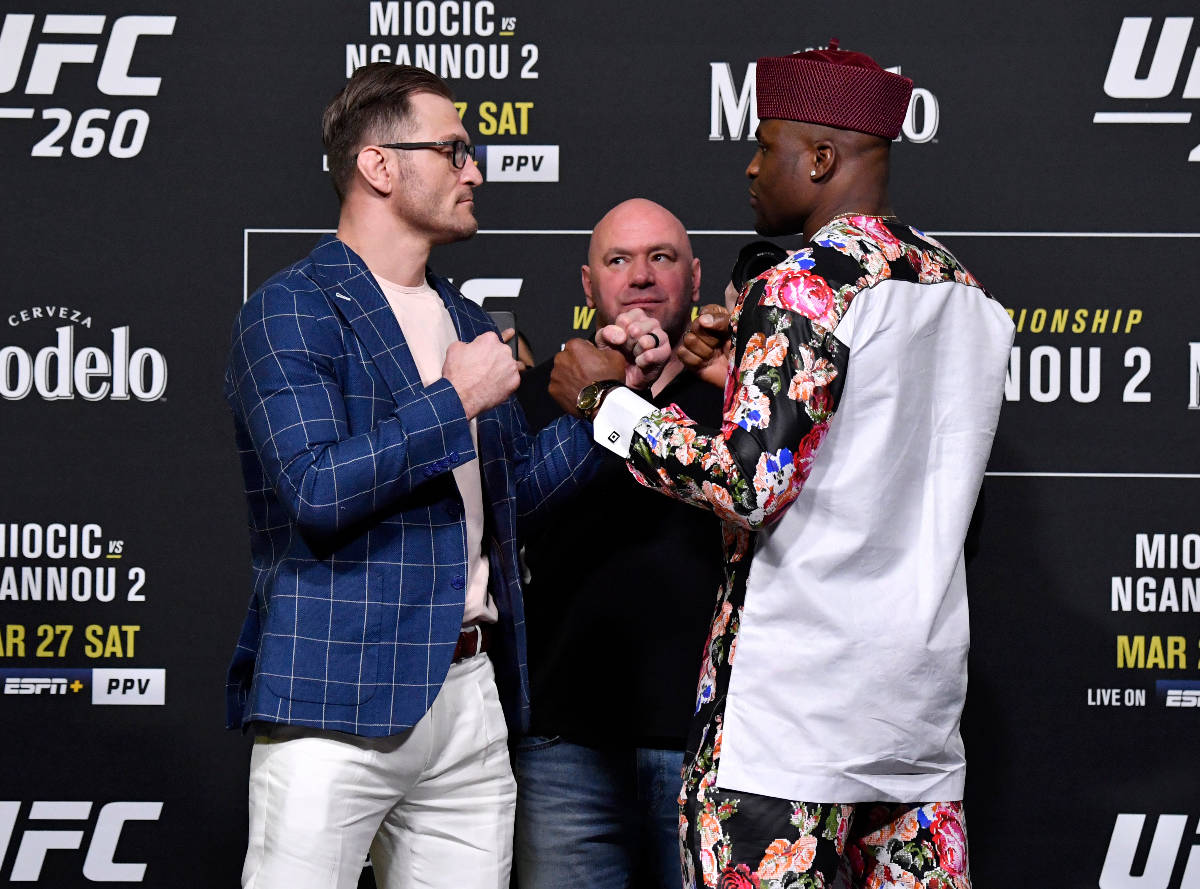 Opponents Stipe Miocic and Francis Ngannou of Cameroon face off during the UFC 260 press conference at UFC APEX on March 25, 2021 in Las Vegas. (Photo by Jeff Bottari/Zuffa LLC) 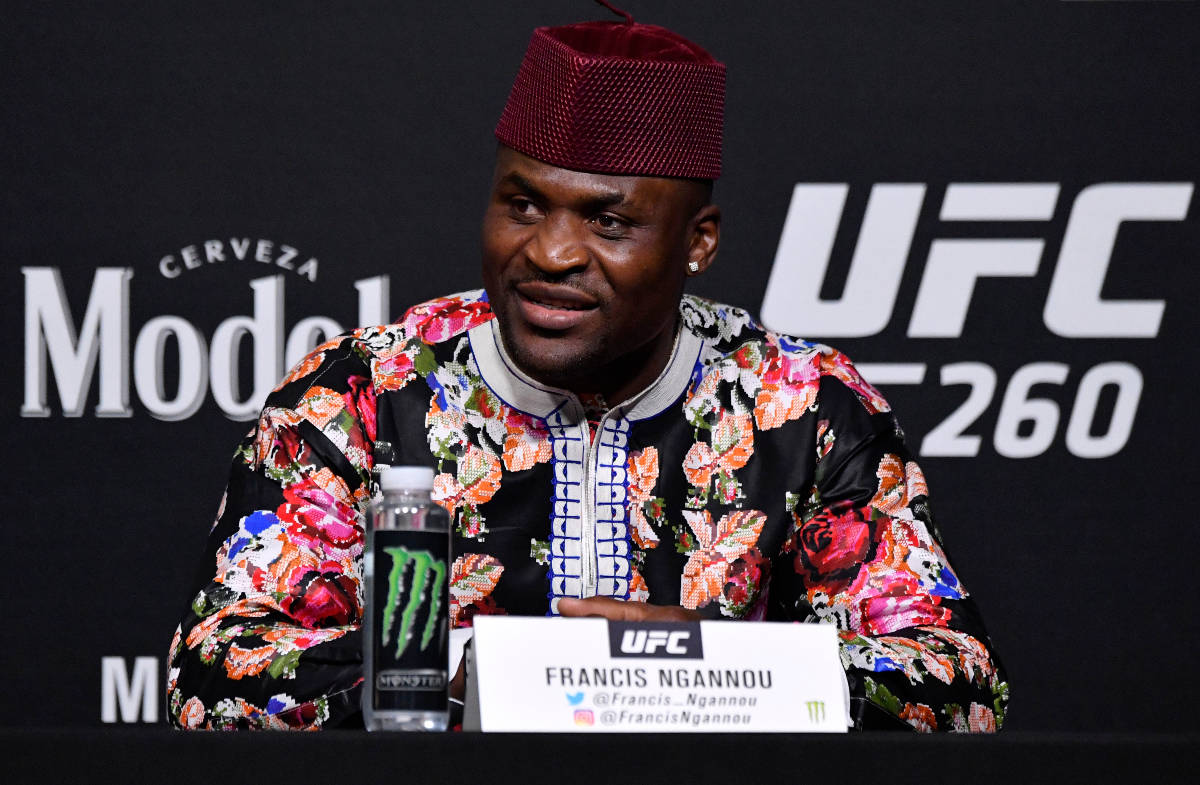 Francis Ngannou of Cameroon interacts with media during the UFC 260 press conference at UFC APEX on March 25, 2021 in Las Vegas. (Photo by Jeff Bottari/Zuffa LLC) 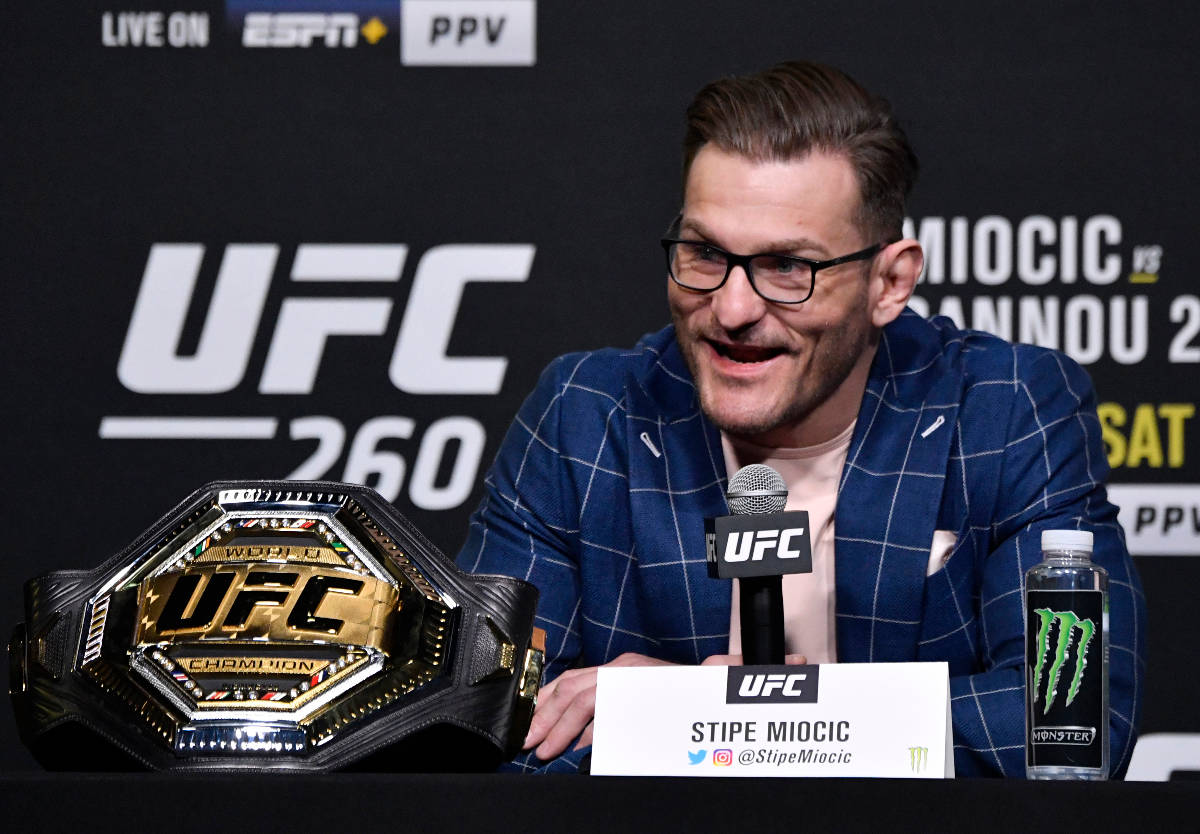 Stipe Miocic interacts with media during the UFC 260 press conference at UFC APEX on March 25, 2021 in Las Vegas. (Photo by Jeff Bottari/Zuffa LLC)

The introductory video as the fighters walked onstage for Thursday’s UFC 260 news conference accurately referred to Stipe Miocic as the most decorated heavyweight in UFC history.

UFC president Dana White’s proclamation moments later that Miocic is the best champion the weight class has ever seen barely raised an eyebrow.

Miocic already owns a one-sided victory over top contender Francis Ngannou in 2018 and is racking up records as he extends his second title reign.

So it may come as some surprise that Miocic will enter Saturday’s main event rematch against Ngannou at the Apex as an underdog for the third straight fight and fourth time in his last five bouts.

“I’m used to it at this point,” Miocic said with a laugh. “Vegas hates me.”

Of course, numbers don’t have feelings. But bettors do and money has been coming through the window on Miocic. Ngannou, a Las Vegas resident, opened as high as a minus-225 favorite in this fight and action on the champion has pushed the number down to about minus-140. The fight may end up closer to pick ‘em by fight time, according to Westgate sportsbook director John Murray.

Murray said there are practical reasons for any perceived slight against Miocic on the betting boards.

Miocic was an underdog against Ngannou in the first meeting and won handily, setting the stage for former light heavyweight champion Daniel Cormier to move up to heavyweight. Miocic was the favorite in that fight only to get knocked out.

Two more bouts with Cormier followed, with Miocic stepping in as an underdog and pulling off the upset each time.

“I think the Stipe Miocic people make a lot of money,” White said. “Everybody who has ever bet on him must love that he’s always the underdog.”

Ngannou backers don’t get quite the same value. He has knocked out his last four opponents in a total of 2:42, including the last two as a favorite of more than minus-250, setting up the rematch and once again establishing himself as the most feared knockout artist in the organization.

Those quick finishes also make him very popular with bettors.

“I guess the reason (Miocic is an underdog again) is because he’s not as flashy,” Murray said. “The way he wins is a little more boring. Ngannou will put you to sleep in the first round. Stipe’s path is what? Not getting knocked out in the first round and then winning a boring fight. The public is always looking to bet on the flashy knockout.”

So the house doesn’t hate Miocic?

“I fully expect him to win as long as he doesn’t get knocked out in the first round and a half,” Murray said.

Ngannou is similarly dismissive over his status as a favorite against the man he concedes is the best heavyweight champion in UFC history.

“Those who make the odds don’t fight,” he said. “I think I was the favorite last time and I lost. I’m not taking anything from that. It doesn’t matter.”

The winner is expected to get the first shot at former light heavyweight champ Jon Jones, who vacated his belt to make a move to heavyweight.

Ngannou has already been posted as a minus-135 favorite in that fight should it happen.

Miocic, unsurprisingly, is a plus-130 underdog.