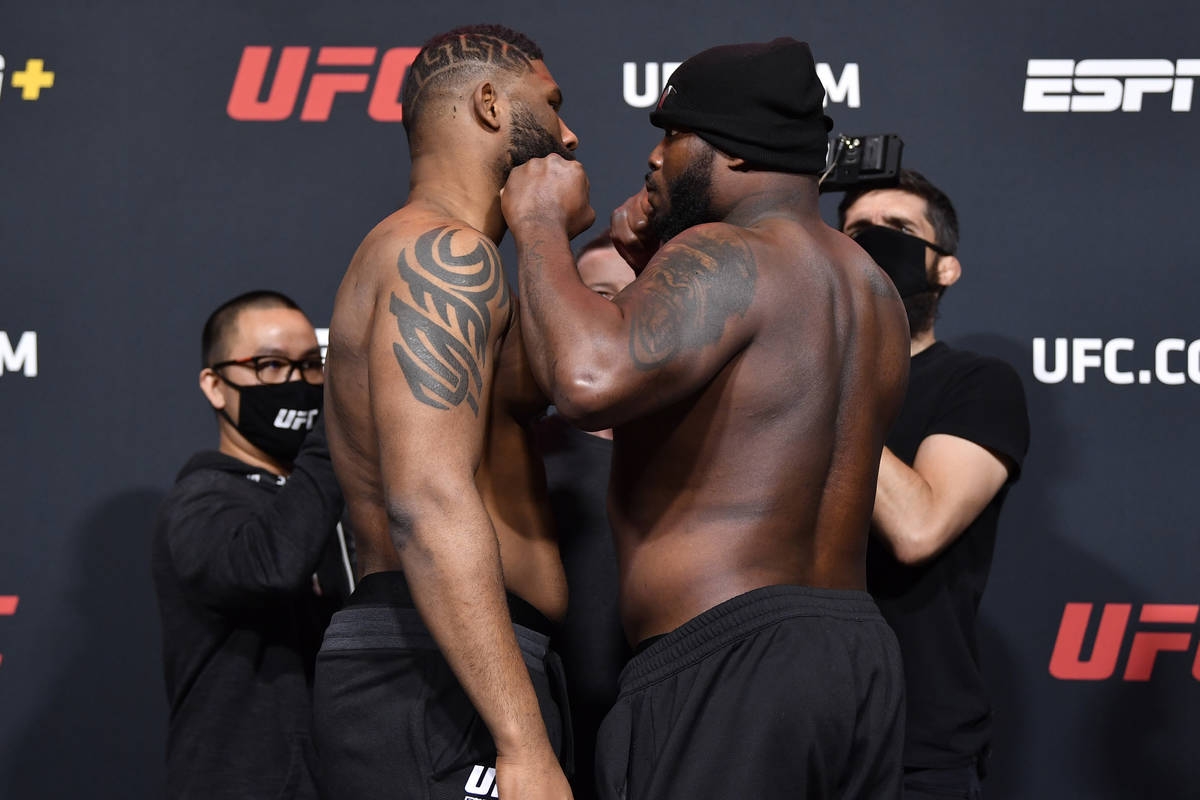 Curtis Blaydes, left, and Derrick Lewis face off during the UFC weigh-in at UFC APEX on February 19, 2021 in Las Vegas, Nevada. (Photo by Chris Unger/Zuffa LLC)

Blaydes, a former junior college national champion wrestler, has so successfully incorporated that skill into his MMA repertoire that he often gets called boring for how he dominates some of the sport’s best fighters.

In his past eight fights, seven of them wins, Blaydes has taken down his opponent 44 times and often controlled them on the mat for extended periods. He has been taken down once.

He will look to execute a similar game plan when he meets knockout artist Derrick Lewis in the main event of UFC Fight Night 185 on Saturday at the Apex in Las Vegas.

Blaydes reads the criticism on social media from those who want him to be more exciting or test his striking ability. He said this week he has no relationship with UFC president Dana White despite his vast amount of success in the past five years, self-effacingly adding he knows White likes fighters who provide spectacular highlights.

Blaydes, who turned 30 on Thursday, might clap back at the occasional detractor on social media with a well-timed meme, but he’s not going to apologize for his victories.

“I get $100 thousand for showing up and $100 thousand for winning,” he said. “I have a child. I’m not going to jeopardize her future or her quality of life to appease people who know nothing about me, who watch me for 15 to 25 minutes and then forget about me. They don’t care about me or what I have going on. I’m a prize fighter, and I’m here to win prizes.”

Blaydes, a Chicago native, hopes to keep winning and wear a UFC title belt someday. He should earn the right to fight for the title next with a win over Lewis, but former light heavyweight champion Jon Jones has moved up to the division and will cut in line for a championship bout.

Blaydes said he is minimally annoyed by having Jones skip ahead of him.

Blaydes said he won’t change his style or personality just to appease fans.

“I’m here to win fights,” he said. “I’m here to earn my money. I’m not a smack talker. I have a speech impediment. So if I try to talk smack and I start stuttering, that ruins the whole thing right there anyway.”

Blaydes said the more people want him to change, the more he will resist.

The bout headlines a main card that will stream on ESPN+ at 5 p.m., with the preliminary card at 2.