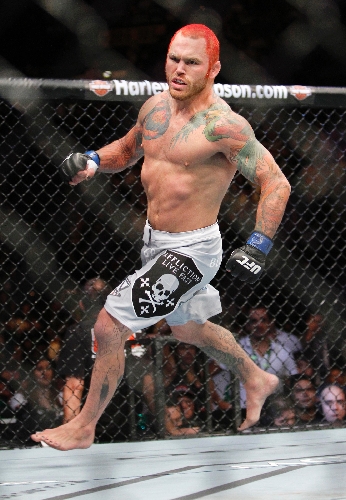 The personal demons of Ultimate Fighting Championship standout Chris Leben are proving as much an obstacle as his opponents inside the cage.

The 31-year-old fighter ran into yet another setback Monday when he was suspended for a year by the UFC, a consequence of testing positive for painkillers Oxycodone and Oxymorphone.

Leben failed a drug test after a Nov. 5 loss to Mark Munoz in Birmingham, England, in the main event of UFC 138. The screening was administered by the organization, which self-regulates cards in most foreign markets and conducts testing through an independent lab.

Leben was a standout personality during Season 1 of “The Ultimate Fighter” and has been a polarizing figure ever since, though his ultra-aggressive fighting style earned him a growing fan base. He has never been one to hide his emotions and has been upfront in discussing his struggles with substance abuse.

Leben tested positive for steroids in 2008 and has been arrested for driving under the influence at least twice.

“I would like to make it known that I fully accept this suspension and apologize for embarrassing the UFC, my friends and family, and the sport of mixed martial arts,” Leben said in a statement released by the organization. “I’m learning that I’m my own worst enemy sometimes. I can’t succeed in the octagon or in life behaving this way. I’ve got to make some real changes over the next year, and I’m going to focus on getting my life and career back on track.

“Again, I’m sorry to the UFC and fans that have supported me since my days on ‘The Ultimate Fighter.’ ”

Leben had won four of his last five fights before the loss to Munoz and appeared ready to finally entrench himself in the upper level of the middleweight division. The year away from competition won’t help in that regard, but UFC president Dana White said he hopes the time away will help Leben get straightened out.

“I like Chris and I want him to do well, but based on his actions, he’s been suspended for one year,” White said in a statement. “If he needs professional help, we are going to be there for him. We want to see him succeed not only in the octagon, but in his personal life.”

All other fighters tested on the card came back clean, a UFC official said.

■ WORLD MMA AWARDS — The fourth annual Fighters Only World MMA Awards will be taped at The Palms on Wednesday night, with 22 awards presented at the black-tie gala.

Tickets are available to the public, ranging from $59 to $99.

■ ‘RAMPAGE’ BACK TO JAPAN — Former UFC light heavyweight champion Quinton “Rampage” Jackson expressed his frustration when it appeared he would not be booked on the organization’s first event in Japan in more than a decade.

“It don’t look like I’m fighting n Japan which I’m not happy about at all, I think its a big mistake by the UFC… (Expletive) it,” Jackson tweeted last week.

The UFC quickly found a way to get Jackson on the card, and he will now face Ryan Bader at UFC 144 on Feb. 26 in Saitama. Jackson remains a star in Japan, where his career took off in Pride Fighting Championships.