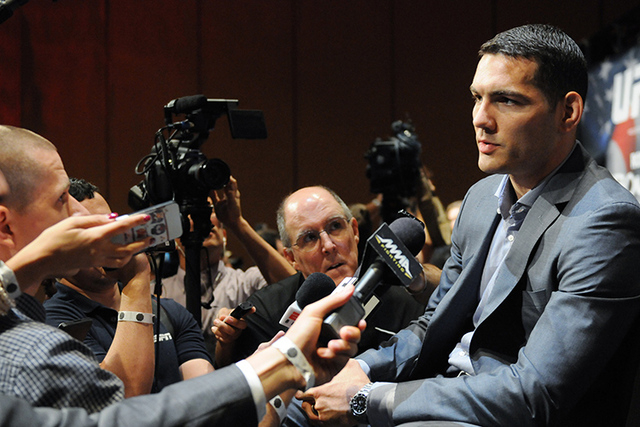 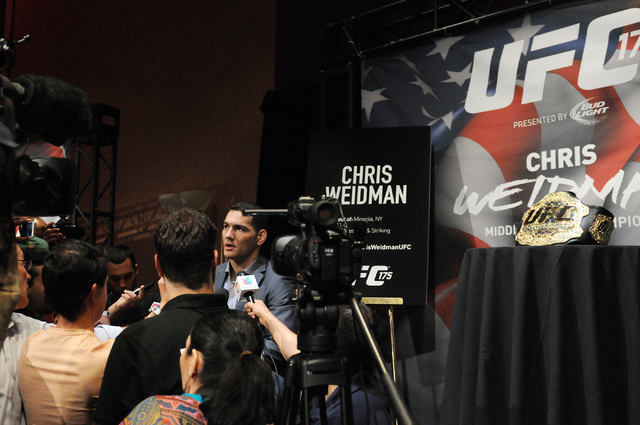 From the day he began training in mixed martial arts, Chris Weidman was driven by the vision of beating Anderson Silva twice.

Silva was the gold standard in the Ultimate Fighting Championship middleweight division and perhaps one of the best fighters of all time, so Weidman knew defeating him once wouldn’t be enough.

Weidman achieved the feat last year, winning the belt from Silva in July and successfully defending it in a December rematch.

“It was beat Anderson, beat him again, and that’s where my vision would kind of end at that point,” Weidman said. “As soon as I beat him the second time, it was, ‘All right, now I’ve got some more goals for myself.’ Now I want to completely dominate this division and set myself apart from everyone else. I want to finish everyone I fight, do a couple superfights, be known as one of the greatest of all time and call it a day.

“That’s not too much to ask for, right?”

That could all start tonight when Weidman defends the belt against former light heavyweight champ Lyoto Machida in the main event of UFC 175 at Mandalay Bay.

One of Weidman’s trainers, former UFC welterweight champion Matt Serra, said having an opponent as good as Machida makes it easy for the champion to remain motivated.

“I think just watching Lyoto fight and the challenge he brings is enough to get anybody up for a fight,” Serra said. “This is the most dangerous guy in the division, the most challenging, the most complicated puzzle to solve. I believe Chris will be persistent, he’ll be victorious, and it will be a good night for us. But nobody’s sleeping on Lyoto. Stud would be an understatement for that guy.”

A victory would complete a whirlwind year for Weidman, who won the belt with a stunning knockout of Silva on July 6, 2013, at the MGM Grand Garden.

He entered the fight as an unbeaten super-prospect who was a trendy upset pick among fighters and insiders, but was far from a household name among casual fans. The 30-year-old Hofstra graduate and two-time NCAA All-America wrestler was also dealing with the aftermath of Hurricane Sandy, which ravaged his Long Island, N.Y., home.

Things have changed quite a bit after winning the fight against Silva, then doing it again in December at the MGM Grand.

“I’m obviously a bit more popular,” Weidman said. “I keep using the same story, but I can’t go to Starbucks and drink a cup of coffee and just read the paper or something. That’s changed. Financially, I went from my parents’ basement three years ago to buying a house that got hit by Hurricane Sandy, then I was back to my parents’ house to now being able to live in a really nice house. I put myself and my family in a good spot financially.”

Weidman said the trade-off of losing his anonymity has been worth it.

“It’s not to the point where I miss those days,” he said. “It’s just part of my life now. I don’t miss it too much. I appreciate that people appreciate what I do. I came from a wrestling background where I’d win a big tournament and come back home and there was nobody even congratulating me. It’s nice for people to support me and what I do.”

Serra has been with Weidman since he started training after college in 2007. He says despite the meteoric rise, Weidman remains the same person.

“Just bigger and better things, that’s all,” Serra said. “Chris is such a great person. I think he’s getting comfortable in the role of champion, and he just fits it perfect.

“The kid should be on a freaking Wheaties box.”

He might be well on his way with a few more victories. “The All-American” has the skills, star power and drive to be a major factor in the UFC for a long time.

There are still skeptics, however.

Weidman has heard over and over about how Silva got caught clowning around in the first fight, then suffered a fluke injury in the second one. He brushes those comments aside.

“But I fought him twice. Me as a fighter, as a competitor, I fought him for four rounds, and I believe I was the better fighter in both those fights. For myself, I don’t have any self-doubt about if I was better than Anderson.”

Now it’s time to move on, and Weidman has turned his focus to a new opponent.

The bout headlines a pay-per-view card that begins at 7 p.m. The preliminary card will air on Fox Sports 1 (Cable 329) at 5, with the first two fights on the card streaming on the organization’s online platform Fight Pass at 4.