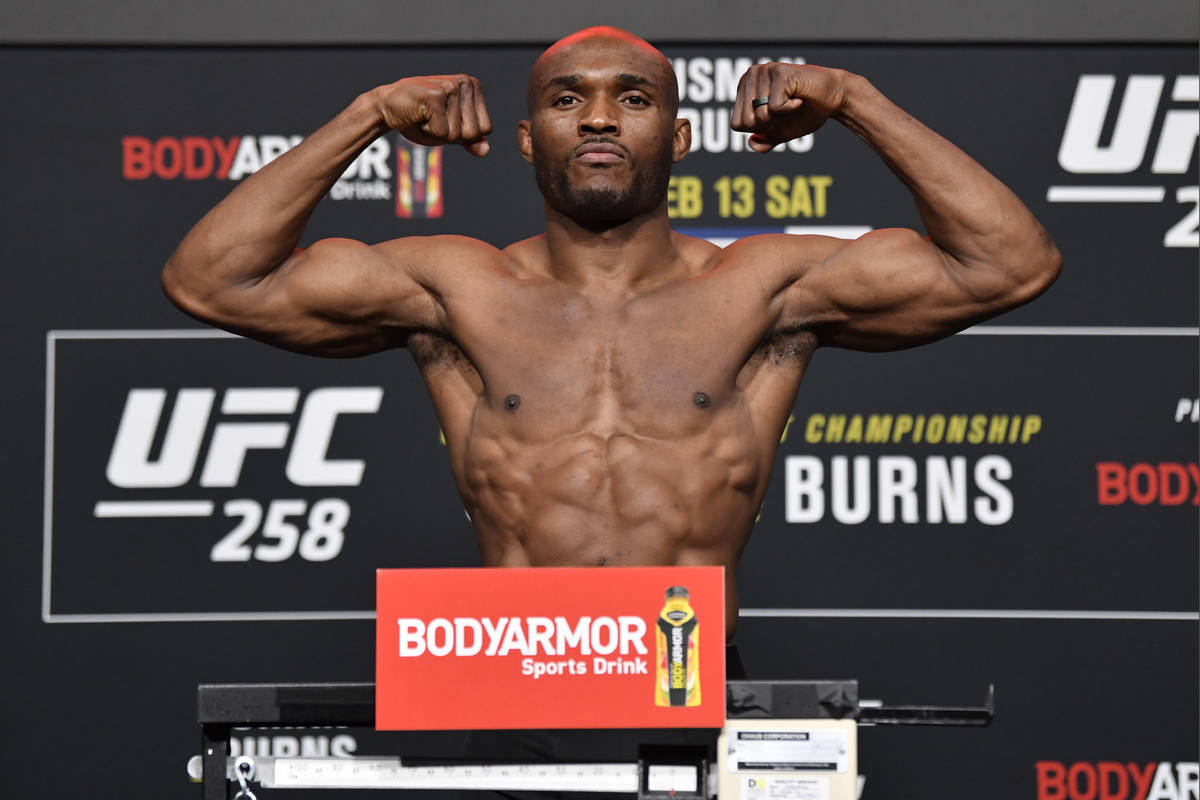 Kamaru Usman of Nigeria poses on the scale during the UFC weigh-in at UFC APEX on Friday, Feb.12, 2021, in Las Vegas, Nevada. (Photo by Jeff Bottari/Zuffa LLC)

The opponents change whenever UFC welterweight champion Kamaru Usman steps into the cage, but the results are the same.

Usman, an NCAA Division II national champion wrestler, has employed a tried and true formula to win his first 12 UFC fights and will defend his belt in the main event of UFC 258 on Saturday at the Apex.

A victory over Gilbert Burns would give Usman a 13-fight winning streak as a UFC welterweight, breaking a tie with Georges St. Pierre for consecutive victories in the division.

There’s not much mystery to Usman’s plan of attack. He overwhelms most opponents with his wrestling base and powerful hands, minimizing damage and wearing them down with superior conditioning.

Burns, a former longtime training partner of Usman, said while most fighters try to finish opponents, Usman just tries to dominate them.

The plan has worked. Usman never has been knocked down or taken down in a UFC fight. He has 47 takedowns.

The style has drawn criticism, including from UFC president Dana White for the lack of entertainment. But Usman continues to plug away, and he earned rave reviews for a thrilling win over rival Colby Covington in December 2019.

“If he wins this weekend, he breaks GSP’s record,” he told TMZ. “He’s on a 16-fight win streak overall. He hasn’t lost since 2013. If he can get through Gilbert Burns, he’s a guy that will just keep grinding, and one day we’re all going to wake up and go, ‘Oh, wow,’ and we’re all going to be talking about (greatest of all-time) status.”

Usman, 33, insists that’s the furthest thing from his mind.

“Legacy is not something I’m worried about right now,” he said. “That’s something other people bestow upon you. At the end of the day, all I can worry about is myself and the things I can control. As long as I’ve done that, the outcome should be what it will be.”

Burns provides a unique challenge. He’s a high-level grappler who won four fights in 10 months after moving back up to welterweight in 2019 to position himself as the top contender.

“When we trained together, he was one of those guys that can push me, and right now, he’s the most dangerous guy in the division,” Usman said. “There’s the element of he has felt me before. It was in training, but he has an idea of the way I move. Plus, he’s on a streak, too, so he has that ultra confidence. He believes he’s the guy.

The bout headlines a pay-per-view card that starts at 7 p.m. Preliminary bouts will air on ESPN at 5, with early prelims streaming on ESPN+ at 4.