Zhang Weili burst on the scene with a 42-second knockout of Jessica Andrade to win the women’s strawweight title in August.

Her first title defense was a far more grueling endeavor.

Zhang retained the belt with a thrilling split-decision win over former champ Joanna Jedrzejczyk in the main event of UFC 248 on Saturday night at T-Mobile Arena.

It was a back-and-forth slugfest from the opening bell, and the pace rarely slowed. Both fighters landed 28 strikes in the first round, and the margin stayed razor thin throughout.

It was Zhang’s 21st straight victory since a loss in her professional debut, though her preparation was impacted by having to leave her native China because of the coronavirus outbreak.

“If we stay together and fight together, we can beat this coronavirus,” she said through an interpreter after the win.

Congresswoman Tulsi Gabbard, who helped facilitate Zhang’s travel the past two months, was in the cage with her after the victory.

Bantamweight star Sean O’Malley didn’t miss a beat in his return from a two-year absence from competition, as he remained unbeaten with a first-round knockout of Jose Alberto Quinonez.

O’Malley dropped Quinonez with a head kick and followed with punches to end the bout after 2:02.

“I felt great in there; it definitely doesn’t feel like it’s been two years,” said O’Malley, whose inactivity was the result of hip and foot surgeries as well as a protracted case with the U.S. Anti-Doping Agency because of a tainted supplement. “I’ve been through a lot to get here. I didn’t know how I would feel making that walk, I tried to picture it in my head so many times, but you never know until you are out there. It just felt right. I think I’m the best MMA striker out there.”

Lightweight Beneil Dariush scored a thrilling knockout of lightweight Drakkar Klose early in the second round after a wild back-and-forth sequence that saw both fighters wobbled.

The end came on a huge left hand that put Klose out cold as he fell back against the cage and dropped to the mat.

Dariush had spent the majority of the first round hanging on Klose’s back trying to secure a choke but never got it locked in.

Welterweight Alex Oliveira snapped a three-fight losing streak with a split decision over Max Griffin. Oliveira controlled the early part of the third round after they split the first two, then hung on until the final bell under the onslaught of a late Griffin rally.

Neil Magny won for the third time in four fights by taking all three rounds for a unanimous decision over Li Jingliang.

Magny used his jab to close distance and did most of his damage at close range and on the mat as he had Jingliang in trouble several times.

On the preliminary card, Rodolfo Vieira and Gerald Meerschaert picked up submission victories. Danaa Batgerel knocked out Guido Cannetti in the first round of a bantamweight bout.

Las Vegan Emily Whitmire was to fight on the card, but her women’s strawweight bout against Polyana Viana was canceled by medical personnel after Whitmire was hospitalized following a difficult weight cut. 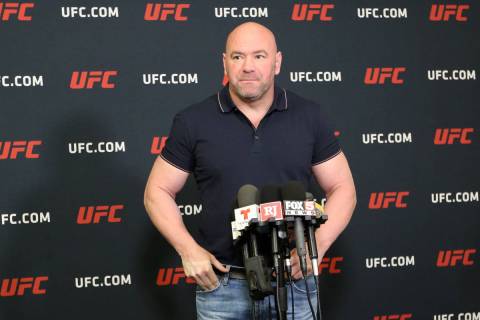 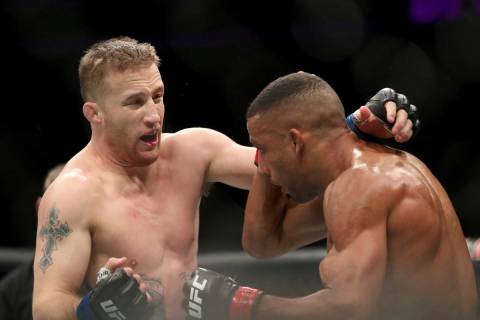