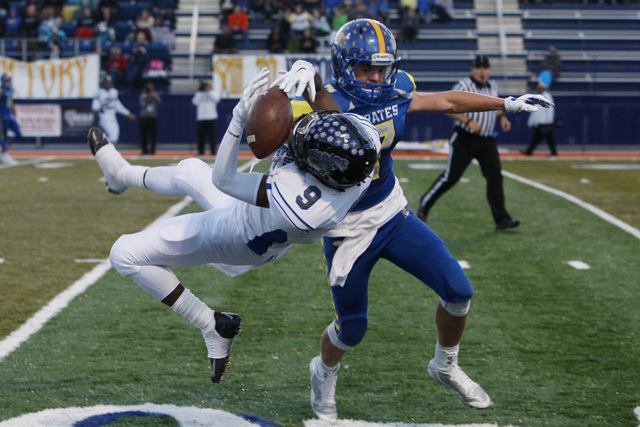 Moapa Valley defensive back Cole Mulcock breaks up a pass intended for Desert Pines wide receiver Andre Watts during their Division 1-A championship game Saturday, Nov. 22, 2014 at Bishop Gorman. After trailing by 20 at the half, Moapa Valley came back and won in overtime 42-36. (Sam Morris/Las Vegas Review-Journal) 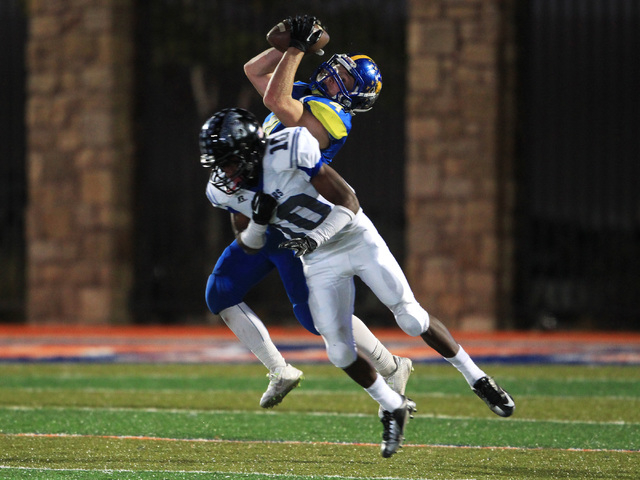 After beating Desert Pines safety Jon Mccoy III, Moapa Valley's Kaleb Bodily pulls in a fourth down pass which he will run in for a 51-yard touchdown to set up the tying 2-point conversion during their Division 1-A championship game Saturday, Nov. 22, 2014 at Bishop Gorman. After trailing by 20 at the half, Moapa Valley came back and won in overtime 42-36. (Sam Morris/Las Vegas Review-Journal) 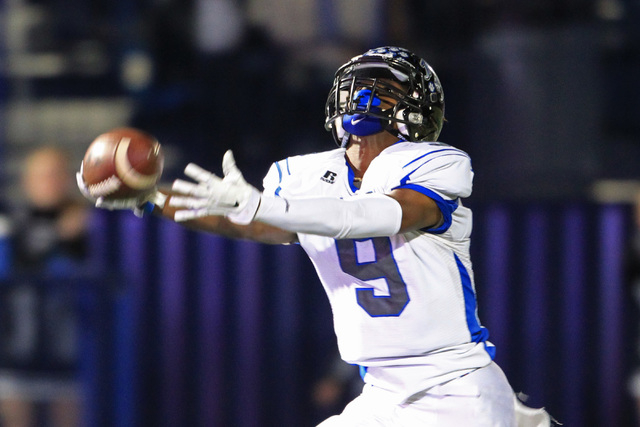 A pass is just out of reach for Desert Pines wide receiver Derek Cope on their final drive during their Division 1-A championship game against Moapa Valley Saturday, Nov. 22, 2014 at Bishop Gorman. After trailing by 20 at the half, Moapa Valley came back and won in overtime 42-36. (Sam Morris/Las Vegas Review-Journal) 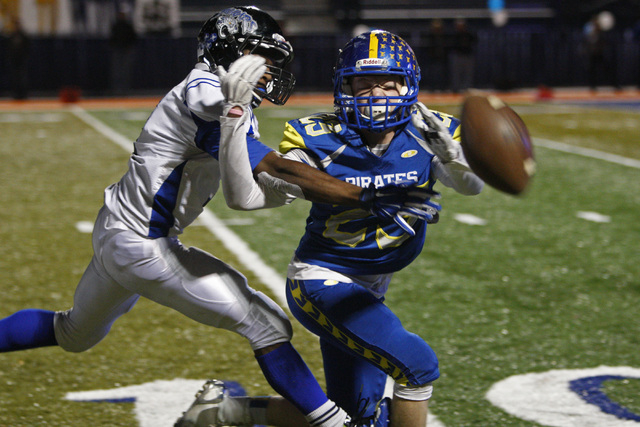 Desert Pines linebacker Isaiah Morris breaks up a pass to Moapa Valley wide receiver Justin Gentry during their Division 1-A championship game Saturday, Nov. 22, 2014 at Bishop Gorman. After trailing by 20 at the half, Moapa Valley came back and won in overtime 42-36. (Sam Morris/Las Vegas Review-Journal) 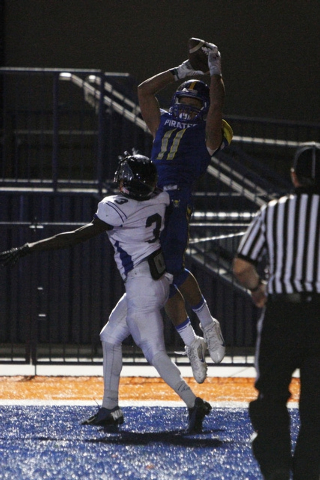 Moapa Valley wide receiver R.J. Hubert pulls in the game winning touchdown while being covered by Desert Pines cornerback Gianni Breland during their Division 1-A championship game Saturday, Nov. 22, 2014 at Bishop Gorman. After trailing by 20 at the half, Moapa Valley came back and won in overtime 42-36. (Sam Morris/Las Vegas Review-Journal) 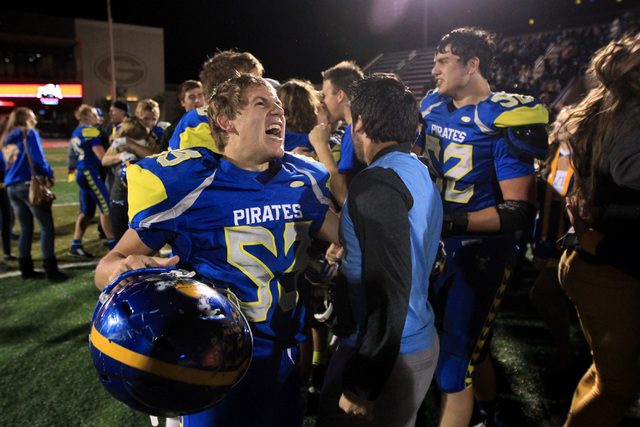 Moapa Valley players celebrate their defeat of Desert Pines during their Division 1-A championship game Saturday, Nov. 22, 2014 at Bishop Gorman. After trailing by 20 at the half, Moapa Valley came back and won in overtime 42-36. (Sam Morris/Las Vegas Review-Journal) 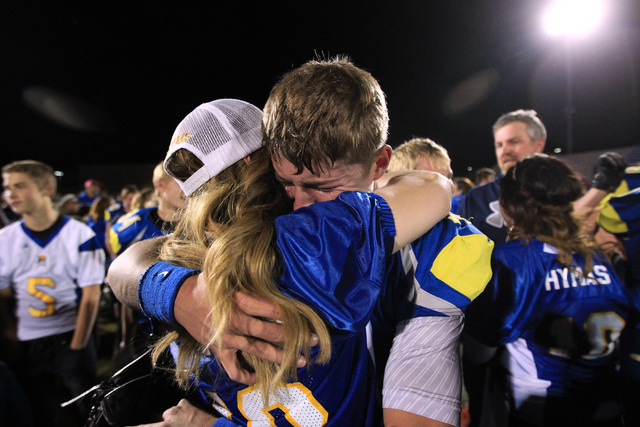 Moapa Valley quarterback Zach Hymas gets a big hug from his mother Becky Hymas after the Pirates defeated Desert Pines in their Division 1-A championship game Saturday, Nov. 22, 2014 at Bishop Gorman. After trailing by 20 at the half, Moapa Valley came back and won in overtime 42-36. (Sam Morris/Las Vegas Review-Journal)

Moapa Valley advanced to the state football championship game four straight years from 2009 to 2012 and didn’t come away with a title.

And for more than three quarters Saturday, it looked as if the Pirates were about to lose for the fifth straight time in a championship game.

But Moapa Valley scored 28 unanswered points in the fourth quarter and overtime to beat Desert Pines 42-36 at Bishop Gorman High School for the Division I-A state title. It was the school’s 16th state football title and the first since 2008.

“We’ve been right here. We’ve been right here too many times to come away disappointed, and it seemed like we were going to do it again,” Moapa Valley coach Brent Lewis said. “To get over this hump and get this monkey off my back, I tell you what, I’m on cloud nine.”

The Pirates (13-0) got the ball first in overtime, and quarterback Zach Hymas rolled to his left and tossed a 10-yard pass to R.J. Hubert in the back corner of the end zone. Hubert leaped over Desert Pines’ Gianni Breland to make the catch to give Moapa Valley a 42-36 lead.

On the first play of Desert Pines’ possession, Dillard Davis couldn’t handle the handoff from Marckell Grayson, and Bo Redd pounced on the fumble to end the game.

“It was just pure joy, and I was just so excited,” Hymas said of his reaction to Redd’s fumble recovery. “You know what, we’re state champions. It’s the greatest win in Moapa Valley history.”

Desert Pines (11-2) dominated the first half and led 36-14 to start the fourth quarter. But somehow Moapa Valley managed to score 22 points in less than eight minutes, tying the game on a do-or-die play on fourth down.

“That’s a play I kind of created this week where we just release the back out of the backfield,” Lewis said. “I didn’t think they would have anyone assigned to him. We ran everybody off, and he ran up the seam replacing them and nobody covered him.”

Hymas, who passed for 303 of his 378 yards in the second half and overtime, said he doesn’t remember what happened on the game’s biggest play.

“I honestly don’t know what I saw,” Hymas said. “I just felt it. And I kind of blacked out, honestly. I don’t remember it happening. I was just in the zone. We were in the zone the whole second half.”

On the 2-point try, Hymas rolled to his left and tossed a pass to Cole Mulcock in the front corner of the end zone to tie the game. Each team came up empty on a final possession, sending the game into overtime.

The Pirates converted on fourth down on each of their fourth-quarter scoring drives.

“They just made so many plays on fourth down,” Desert Pines coach Tico Rodriguez said. “Our kids were in good position; it’s just them. They never quit. Our guys played hard, too, in the second half. They just made play after play. It was a great game.”

Morris finished with 177 yards rushing, including a 54-yard TD run in the first half. He added a 7-yard TD reception to lead the Jaguars, who were making their first appearance in a state title game since 2002.

“It’s unreal,” Mulcock said. “I can’t even think right now. It’s so crazy how we won this game, how we came back in the second half and gave it all we had.

“This game is what I’ve dreamed about my whole life. It’s amazing winning this game.”