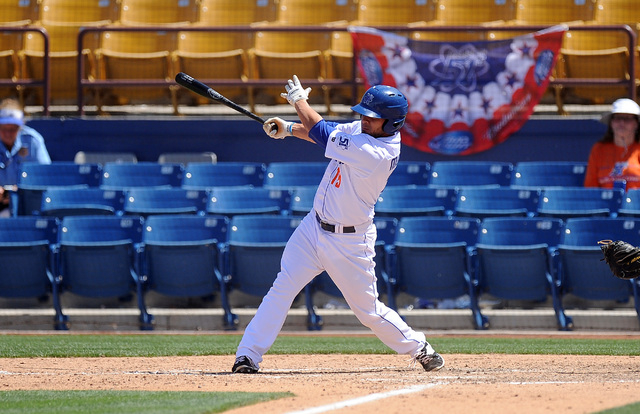 Las Vegas 51s pinch-hitter Johnny Monell hits a single in the seventh inning of a Triple-A minor league baseball game against the El Paso Chihuahuas at Cashman Field in Las Vegas Sunday June 7, 2015. El Paso defeated Las Vegas 15-9. Monell was not in the starting line-up but was inserted into the game in the bottom of the seventh inning.(Josh Holmberg/Las Vegas Review Journal)

The 51s lost a pair of two-run leads to Albuquerque on Monday night.

But catcher Johnny Monell made sure it didn’t matter.

Monell launched a walkoff home run to center field in the bottom of the 10th inning to snap a four-game losing streak and send Las Vegas to a 6-5 Pacific Coast League victory over the Isotopes.

Monell’s homer was his first of the season and just the team’s third since Opening Day. Monell, who entered as a pinch hitter in the third inning and remained in to catch, went 2-for-4 with two runs batted in.

The 51s took a 5-3 lead lead in the fourth inning shortly after surrendering their first two-run lead, but the Isotopes chipped away, scoring both in the sixth and eighth.