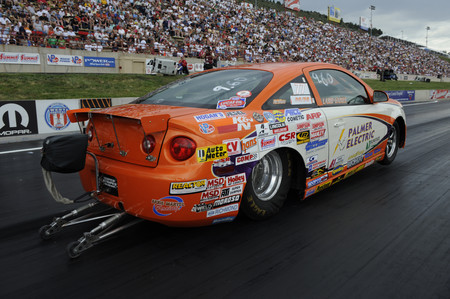 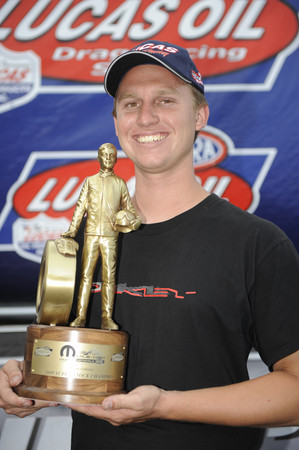 When Chris Lamb introduced his 8-year-old son to driving half-scale dragsters with motorcycle engines, he wasn’t thinking that his son one day would be on the cusp of achieving a drag-racing milestone.

Lamb, now 22, can become the second racer to win NHRA national event titles in four categories during the same season.

Lamb will compete in Super Gas and Comp Eliminator at the speedway, where pro categories begin racing Friday. The UNLV senior from Henderson has won titles this year in Super Comp, Super Gas and Super Stock driving distinctly different types of race cars. He owns three other major NHRA titles.

A title in Comp this weekend or a week later in the finale in Pomona, Calif., will tie him with Coughlin.

“I have here and Pomona to accomplish that,” Lamb said. “The only other goal I have left this year is to win two titles in one weekend.”

He almost was able to mark that off his list in July at the NHRA Fram Autolite Nationals at Infineon Raceway in Sonoma, Calif. After losing in the final round of Super Stock in his 150 mph Chevrolet Cobalt, he rushed back to the starting line to guide his 170 mph Super Comp dragster to the event title.

This semester he’s taking five classes at UNLV, where he is majoring in accounting. He will be at the speedway for qualifying today through Saturday before Sunday’s championship eliminations.

He spent the summer driving 7,600 miles around the country competing in NHRA national and regional races along with various other races that can pay more than $20,000 to win. He figures he will have raced on all but eight or 10 weekends by the end of the year. He serves as crew chief and driver.

“I make all decisions on setting up the car,” he said. “I probably enjoy that more than driving.”

He’s content to remain a Sportsman competitor, where an NHRA title in each of his classes can pay up to $15,000.

Despite those potential paydays, Lamb will continue to race around classes that could include going for a master’s degree.

His calculating approach to racing won’t let anything detract from his goals and responsibilities at the track.

“I don’t get nervous anymore,” he said. “I’m not out there to have fun and drink beer with my buddies.

“For the most part, it’s not fun; there are fun moments, but it’s work.”